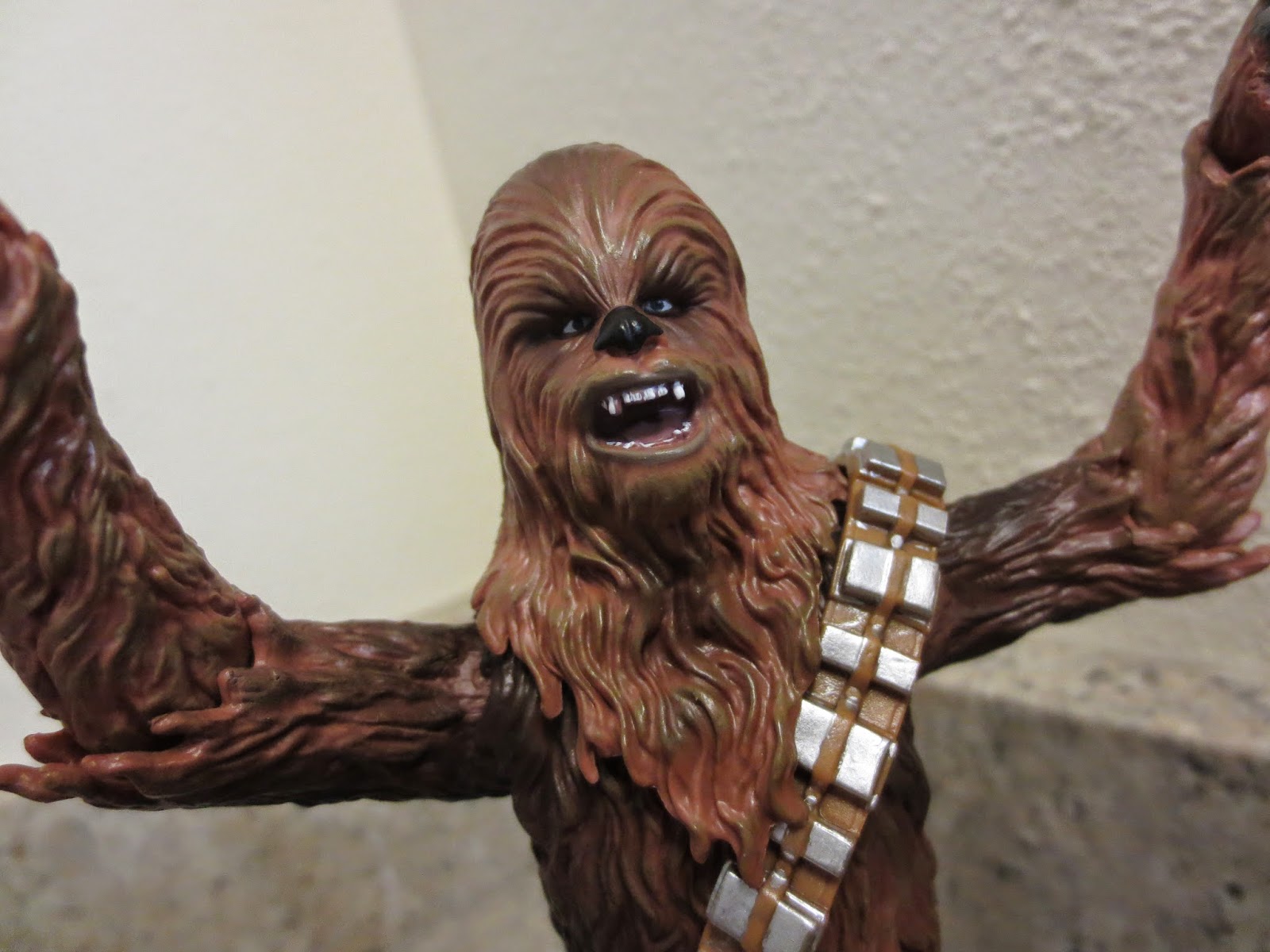 What? Why the heck is Chewbacca part of 31 Days of Toy Terror? Good question. Is there any Star Wars character more universally loved by both adults and small children than Chewbacca? Probably not, but that doesn't mean that this guy still can't pull people's arms out of their sockets. Yes, it might be a stretch, but Chewbacca from phase II of Hasbro's Star Wars: The Black Series is our featured review for today.  Honestly, I'm not sure Chewbacca needs any real introduction, so I'm going to take a minute and talk about my love/ hate relationship with this line. If you want to read it, read on; otherwise, just jump after the break for a review of the Star Wars Black Chewbacca.

Last year, I had the highest of hopes for Star Wars: The Black Series as every release in series one and two was incredible and pretty much the definitive release of a character. There's really no reason to buy another version of figures like Darth Maul, or R2-D2, or Greedo. Figures like Han Solo, Luke Skywalker in his X-wing Pilot Gear, Princess Leia in her slave girl outfit, and even Boba Fett definitely offered a fairly definitive version of a character in a particular look. With his Stormtrooper utility belt and swappable gloved hands, Han Solo is a pretty comprehensive Episode IV Han Solo in his standard duds. Boba Fett is the only Episode V Fett I imagine I'll ever need. Every figure felt complete. While I can always think of little extras that would have been cool, I was very content with what Hasbro gave us. Then series three hit. The Stormtrooper was great (although slightly under armed), but Bespin Luke and Episode III Obi-Wan Kenobi were disasters. No alternate portrait for Luke? No removable hand? A prequel Jedi with no robe? Besides the terrible case packs, Hasbro just seemed to be letting the line rest on the popularity of Star Wars and the novelty of finally giving us 6 inch figures rather than really doing everything to make these toys the best can be. Throw in stuff like the deluxe Jabba the Hutt only coming with his accessories at SDCC and I felt like I was really over the line. Of course, then I ran across the Speeder Bike and decided to pick up a few figures here and there. If I'm harsh on Star Wars: The Black Series, it's only because I feel like this line can and should be the absolute best that it can be. Enough with my rant. The review is after the break... 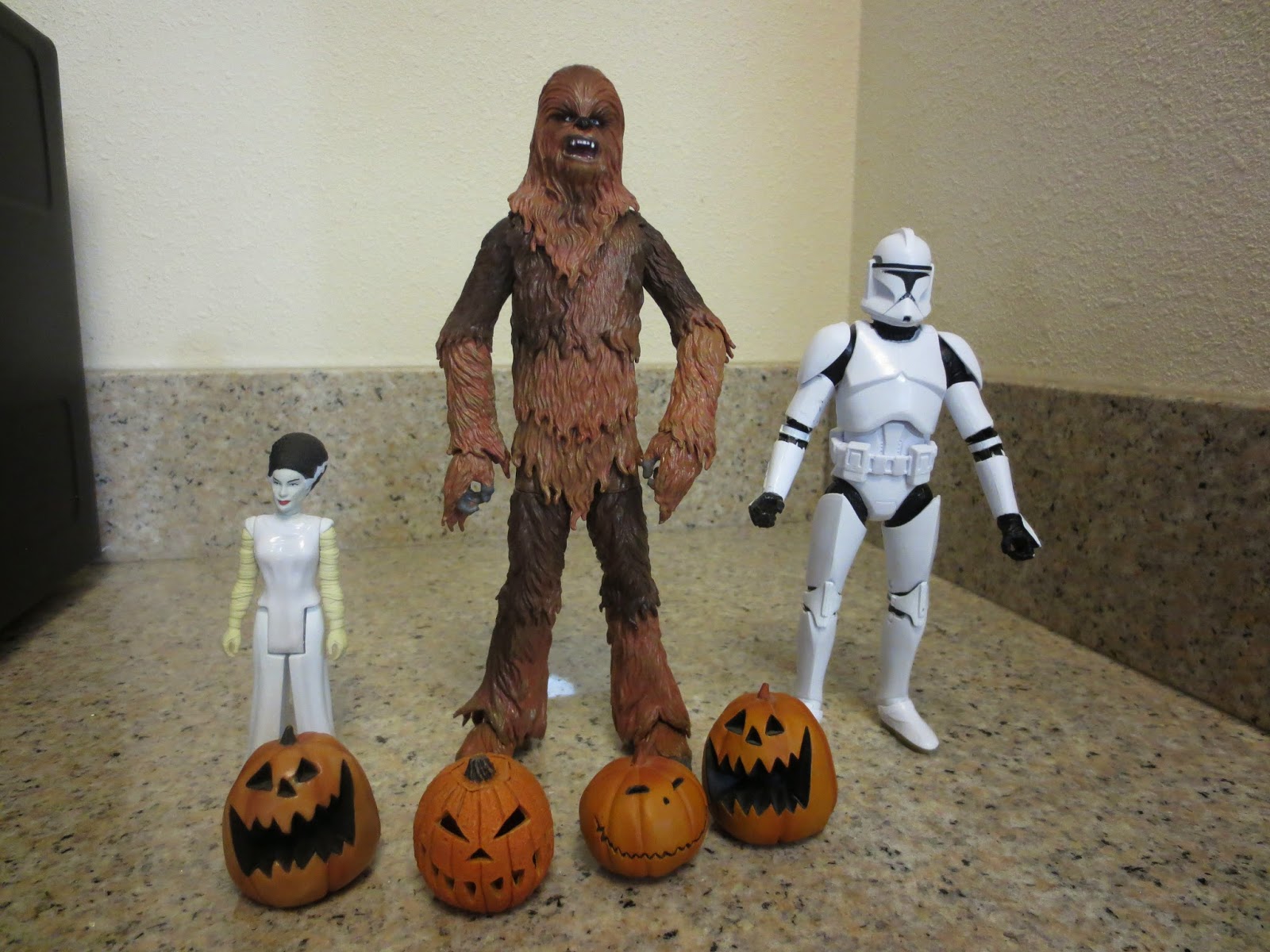 The mighty Chewbacca is tall. Wookiepedia lists Chewie's height as 2.28 meters, or just a little under 7 1/2 feet tall.  Hasbro is really doing a pretty good job with scale in this 6 inch line considering that Chewbacca stands just a little over 7 1/2 feet tall. I've seen a few other reviewers balk at his size and while he's a little taller than he should be, it's not by by much. I personally think he looks great. I personally think many of us are so accustomed to our Kenner and early Hasbro figures that we miss out on the actual scale differences between these characters. While the humans have been hit or miss, Chewbacca has a pretty realistic look to him. Not eerily realistic, but I don't think he'd look out of place in any 6 to 7 inch toyline. It's also worth nothing that Hasbro changed the packages for phase II of The Black Series. They've been redesigned a little bit and now better accommodate tall characters like Darth Vader and Chewie here. 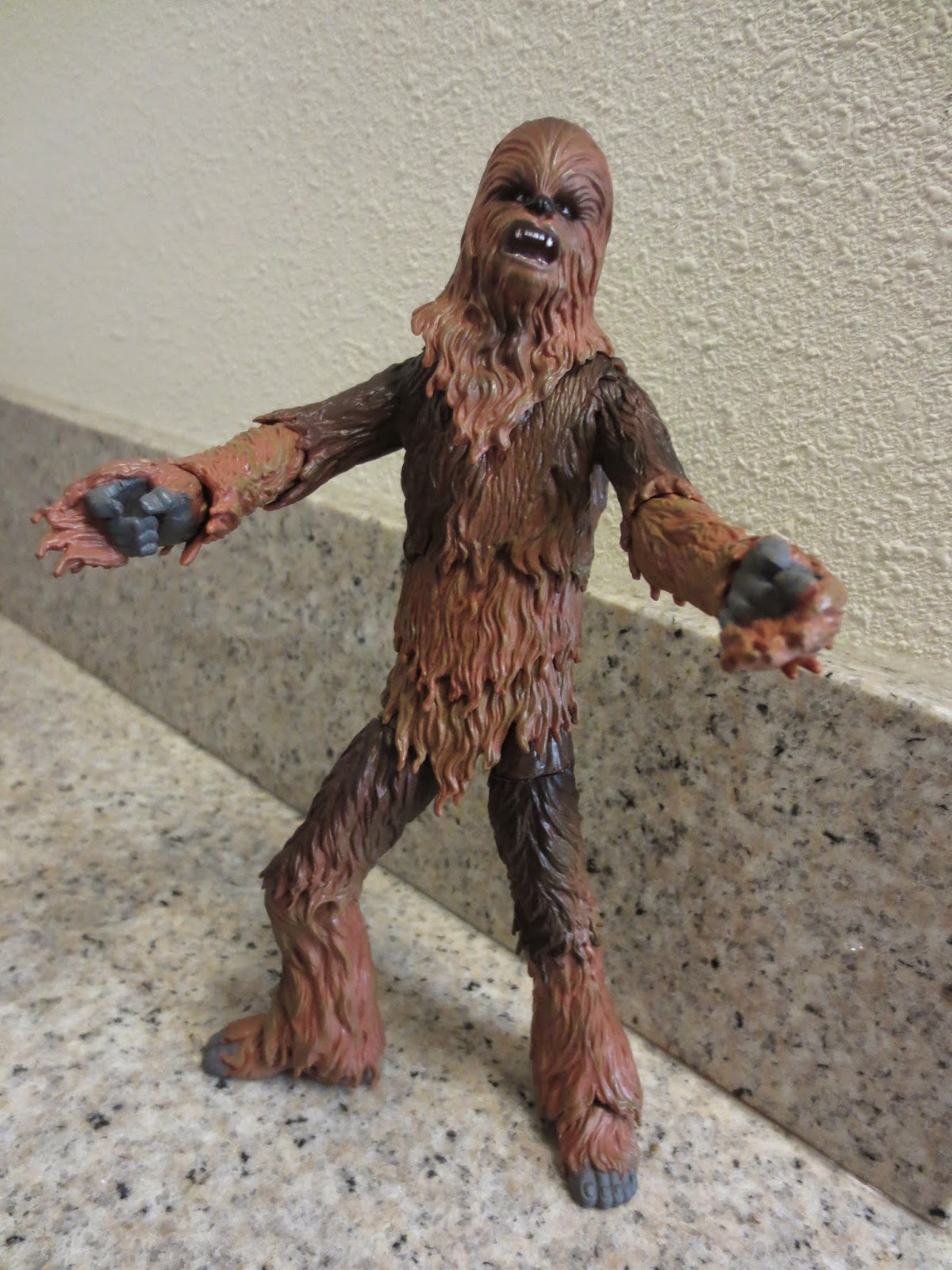 Chewbacca has quite a few points of articulation, but that doesn't mean he can take every pose you'd like. He features: swivel/hinge ankles with lateral rockers, swivel/hinge knees, swivel hips, ball jointed hips, swivel waist, abdomen hinge, mid torso swivel, swivel/hinge shoulders, swivel/hinge elbows, swivel/hinge wrists, and a ball jointed head. Looking at that written down everything seems just fine. It looks great two, as the majority of the articulation is hidden underneath Chewie's fur. Take a minute to bend this Wookie, though, and you'll realize there are a few problems with the range of motion. Frankly, the range of motion on many joints is pretty limited. The way the fur hangs over the joints keeps Chewie from putting his hands behind his head and leaning back after a great Holochess move. I commend Hasbro on trying to hide the articulation, but the form has really hindered the function here somewhat. 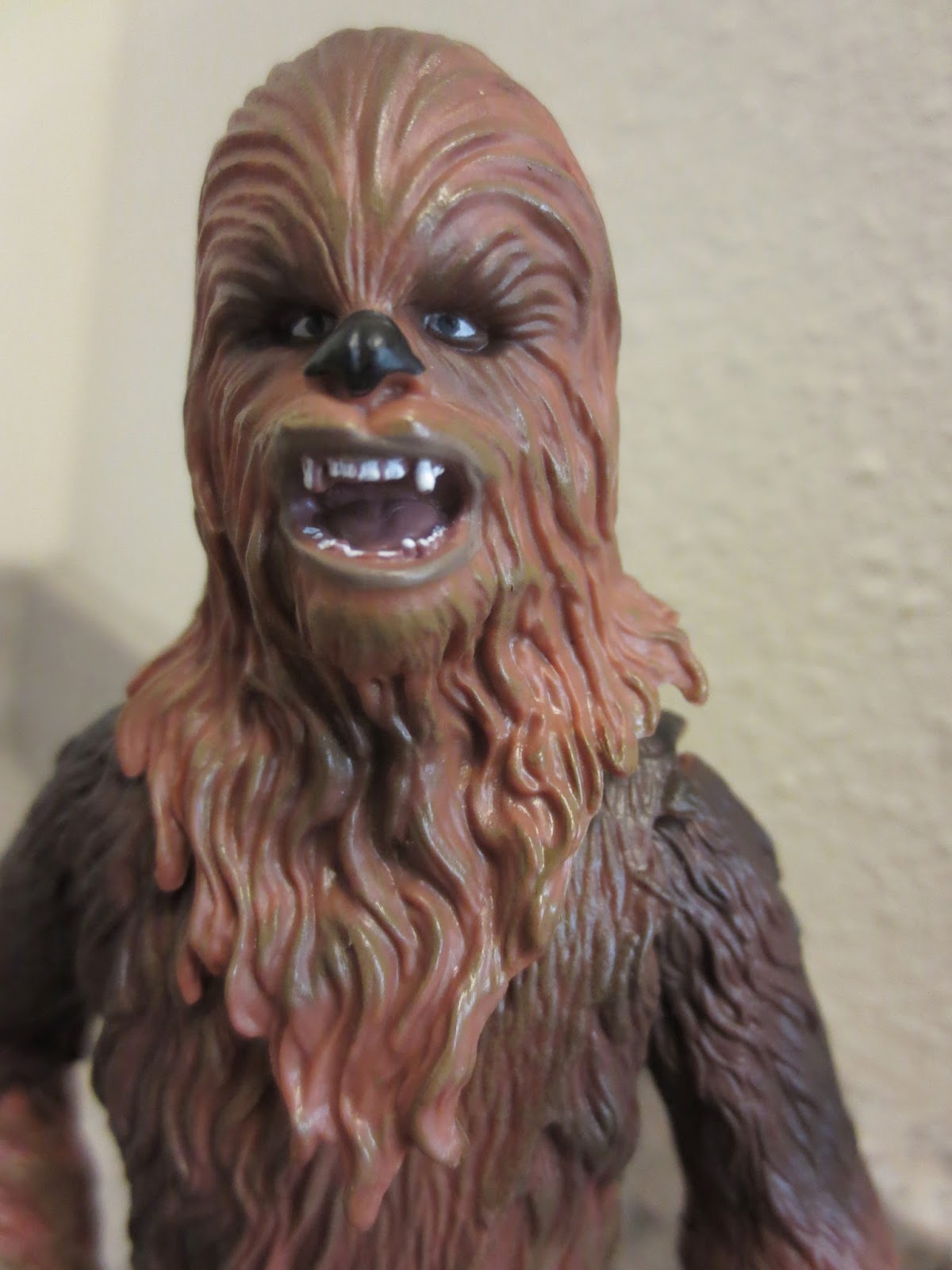 Overall I'm quite happy with Chewbacca's sculpt. I'm going to say 90% happy. I think the body looks fantastic. I like the way that Hasbro chose to layer the fur on the torso to make room for the articulation as it actually helps to give Chewbacca a more textured look. The fur looks quite good and I really like how the fur where Chewie's bandolier rests was sculpted to look pressed down. The headsculpt is where I have problems, yet I have trouble putting my finger on them. I guess I'm not 100% sure what expression Chewbacca is giving us. He doesn't really look angry, even though his mouth is open. Is he laughing? I'm just not sure. I can understand why Hasbro went for an open mouth look for Chewie but I don't think they captured an expression. I really wish they'd gone for including an extra portrait here with a closed mouth. I also can't help but feel the proportions of the head are off. When I look at this figure I definitely see a Wookie, but I'm not totally sure I'm getting a Chewbacca vibe. 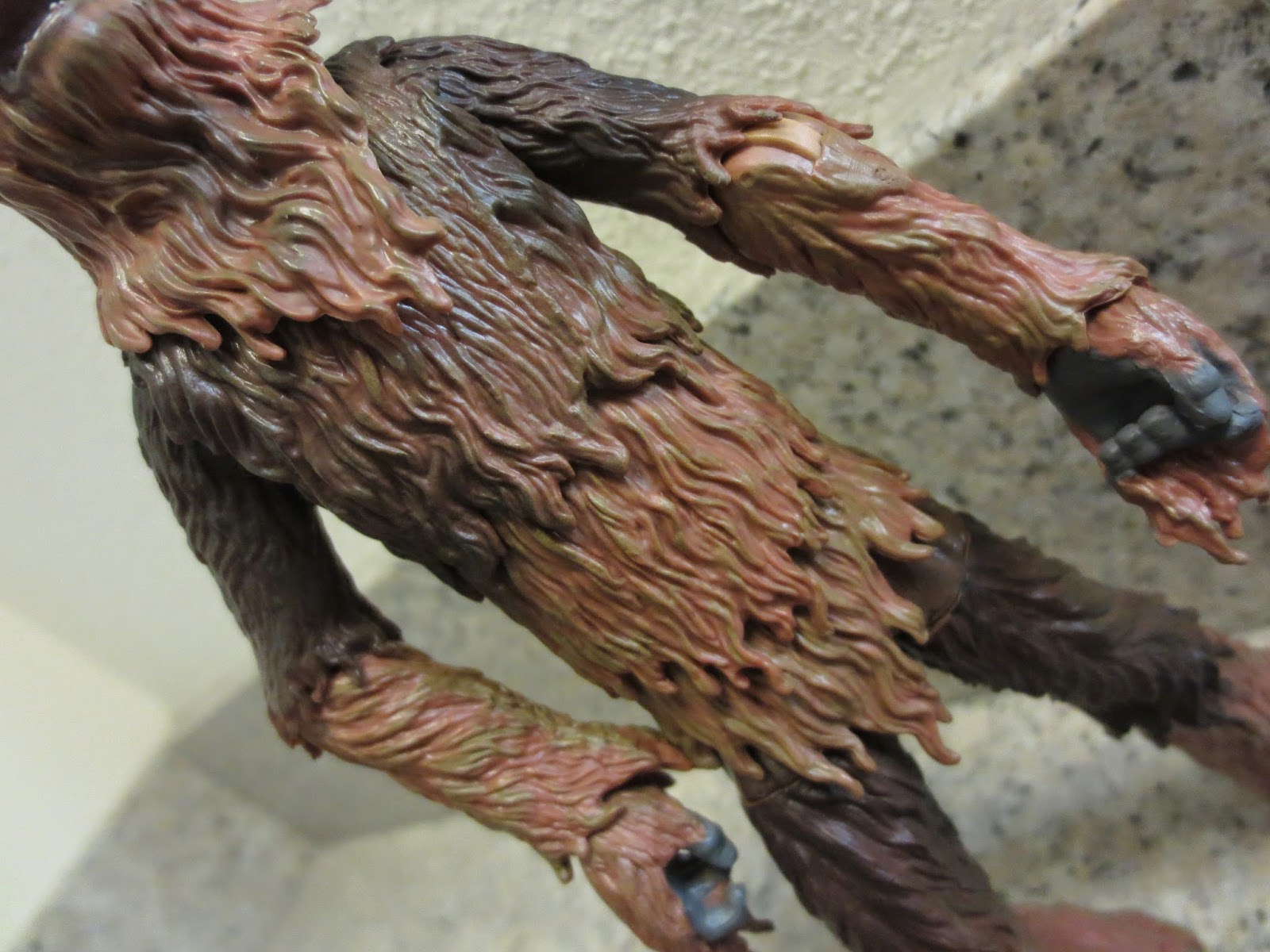 The paint's good, if a bit plain. He's molded in brown plastic with gray hands and feet and a darker spray app on various parts of his torso. I think he needs a bit more color to his fur (maybe some lighter streaks?) to really give him some more texture. This isn't bad at all, but my word: This is Chewbacca! He really and truly deserves Hasbro's A-game and I'm not sure that's what they brought. 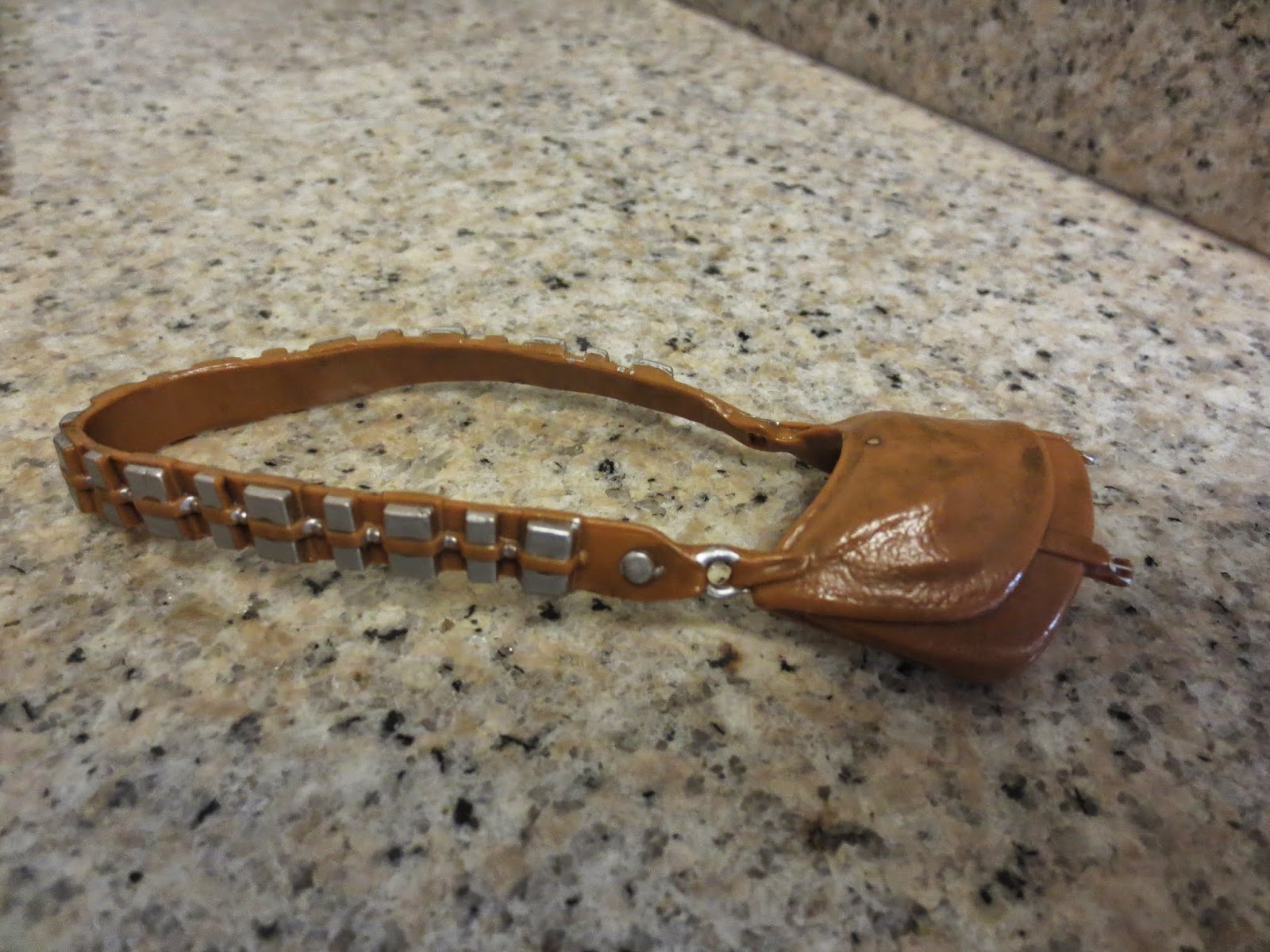 Chewbacca comes with two accessories: His Bowcaster and his satchel/ bandolier combo. Let's talk about the bandolier first as it's less of an accessory and more a part of the character's costume. Much more knowledgeable people than me have discussed every aspect of Chewie's bandolier across all four movies it appeared in, and suffice it to say that this seems largely accurate except that there appear to be a couple more boxes on the bandolier than appeared in Episode IV. That's an odd detail, but one I feel worth mentioning to earn some geek cred. The bandolier fits on Chewie quite well and rests snugly under the the fur on the left of his head piece. 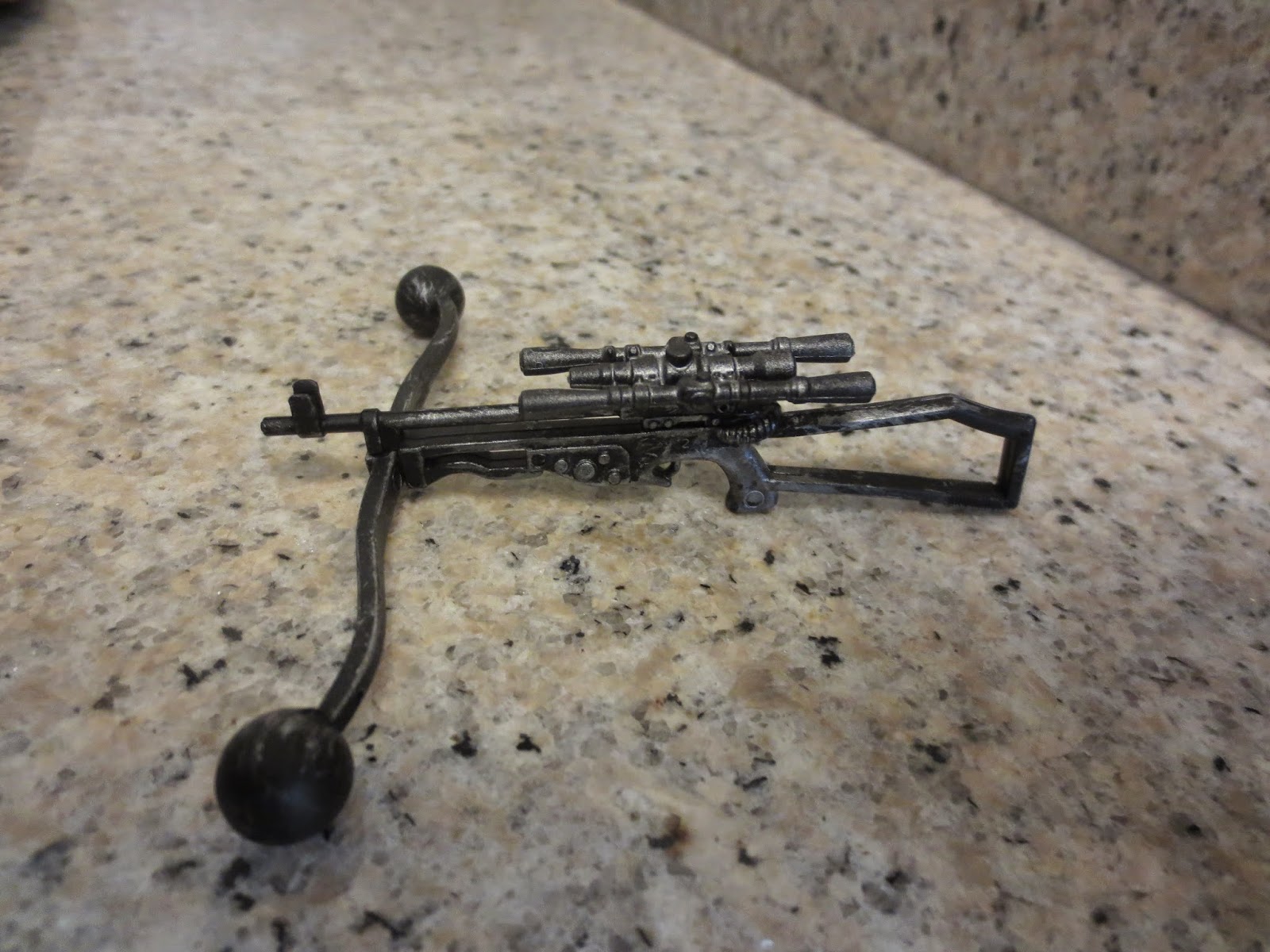 The second accessory is Chewbacca's Bowcaster. It's his signature weapon and one of the most recognizable guns in the original Star Wars trilogy. It comes disassembled in the package, so you have to attach the prods and polarizing orbs to the front of the main weapon. The sights are also removable as a single piece, just in case you want to change things up a bit. Overall, the Bowcaster looks great with its weathered paint job, but it is missing something: The sling. There is no sling on the Bowcaster, something that was not only present in the films but also in many previous Hasbro Chewbacca action figures. I'm not sure why Hasbro decided to leave this off, but it kind of irks me a bit. 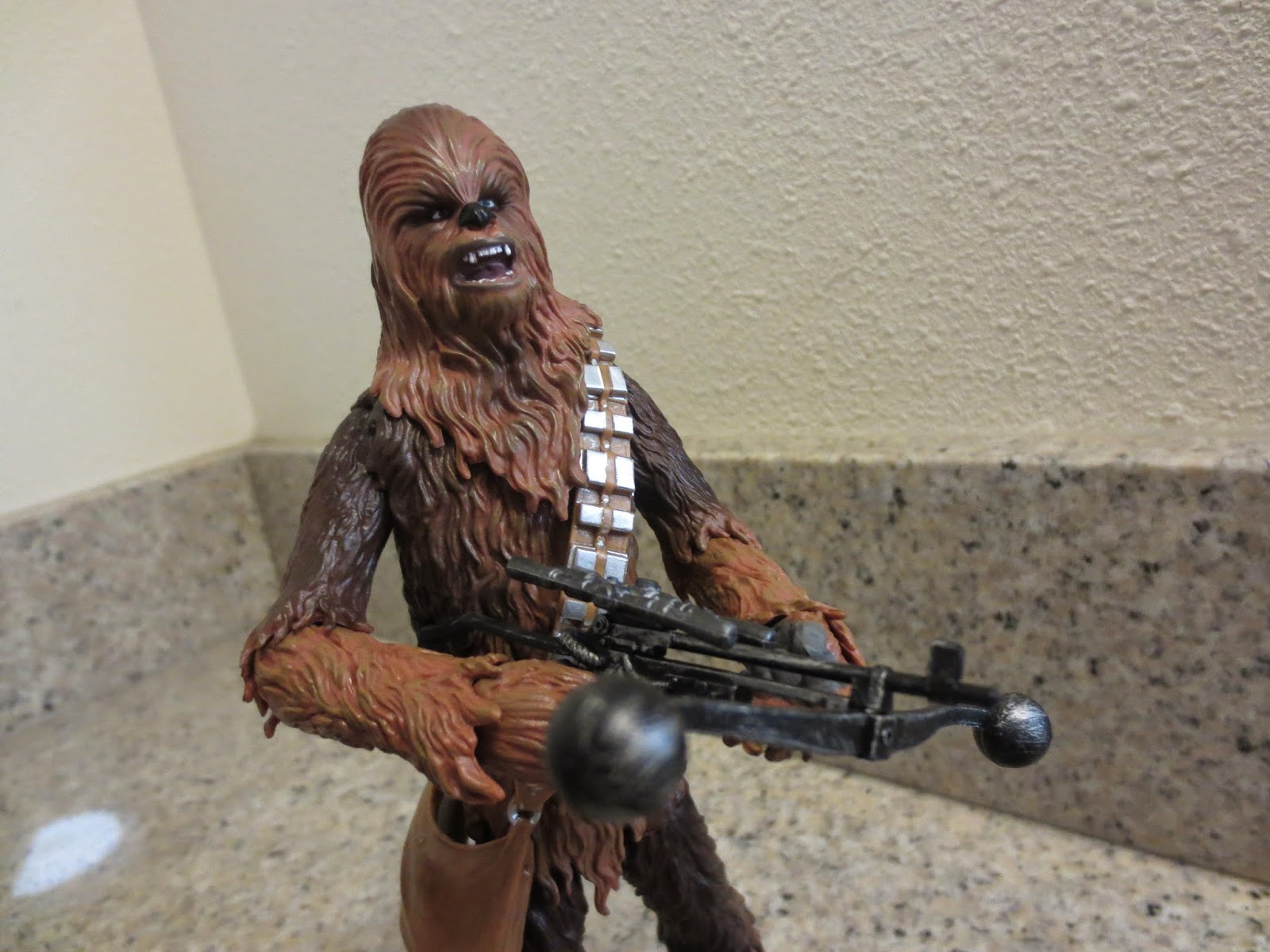 Whenever I review figures from Star Wars: The Black Series figures, I feel like I'm being overly critical. There's a reason for that: Hasbro has been doing amazing things with their 1/18th Star Wars figures for years and I only expect the best when they're given a canvas almost twice as large. Useful articulation, film accurate sculpts and weapons, and great likenesses should be the rule, not the exception. I'm being tough on Hasbro because I've seen what they're capable of through their work on the Vintage Collection and I know they can do better. Chewbacca is by no means a bad figure, but he's not as amazing as he could be. Still, I'm giving him a Great with my biggest nits being the paint, the odd face and head sculpt, and the lack of a sling for the Bowcaster. Chewbacca's an important enough character that I'm we'll see him again. I'd be OK with a release of a prisoner Chewbacca with his chain that Leia used to tow him to Jabba's palace (the binders from the Death Star could come with Han or Luke in their Stormtrooper disguises) or a Hoth Chewie with snow in his fur. Maybe then we'll see an improved headsculpt. For now, though, this is the Wookie we've got.