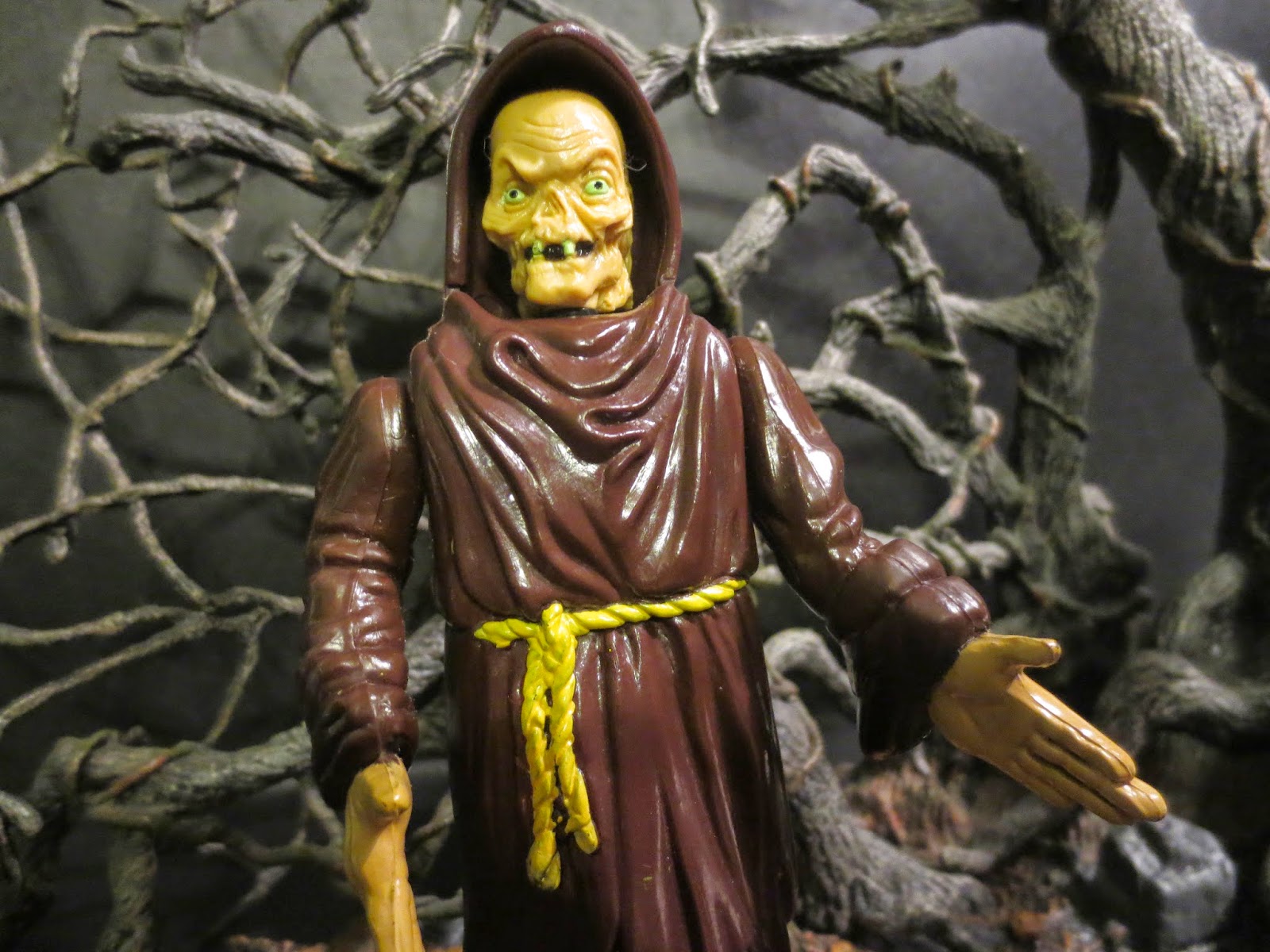 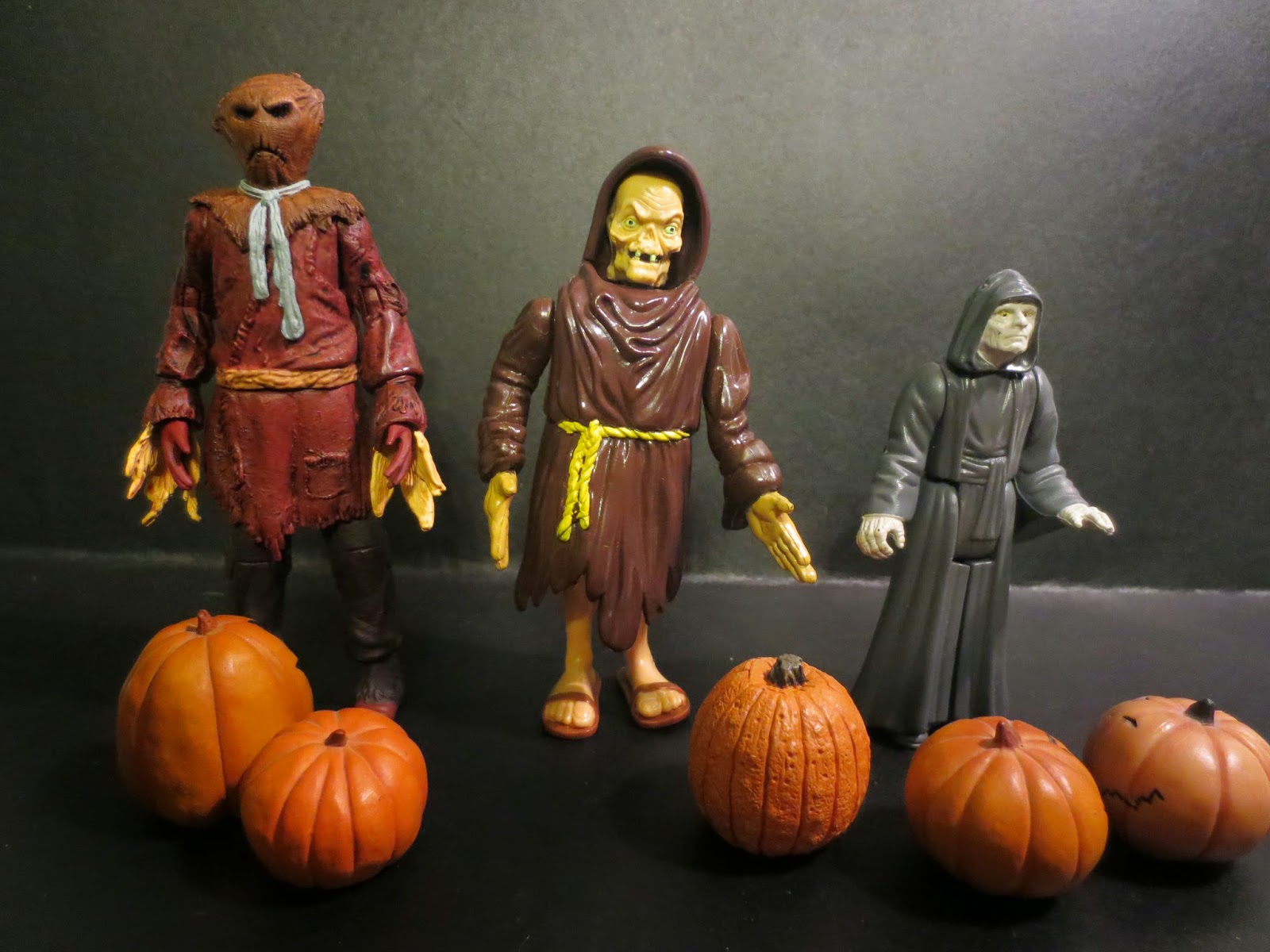 The Cryptkeeper stands about 4 3/4 inches tall. While this toyline was based on the animated series, the headsculpt and color of the Cryptkeeper's skin resembles the HBO version of the character far more than the animated version of the character. I think this was for the best, however, as I recall being pretty excited to have a toy of the Cryptkeeper. Yes, while my parents were pretty strict about what I watched as a kid, somehow I still saw an episode or two of Tales from the Crypt while traveling on vacation and staying in hotels. Due to the size and style of this figure, I imagine he'd fit in well with a variety of 90's toylines including Teenage Mutant Ninja Turtles, The Toxic Crusaders, Beetlejuice, or Monster Force. 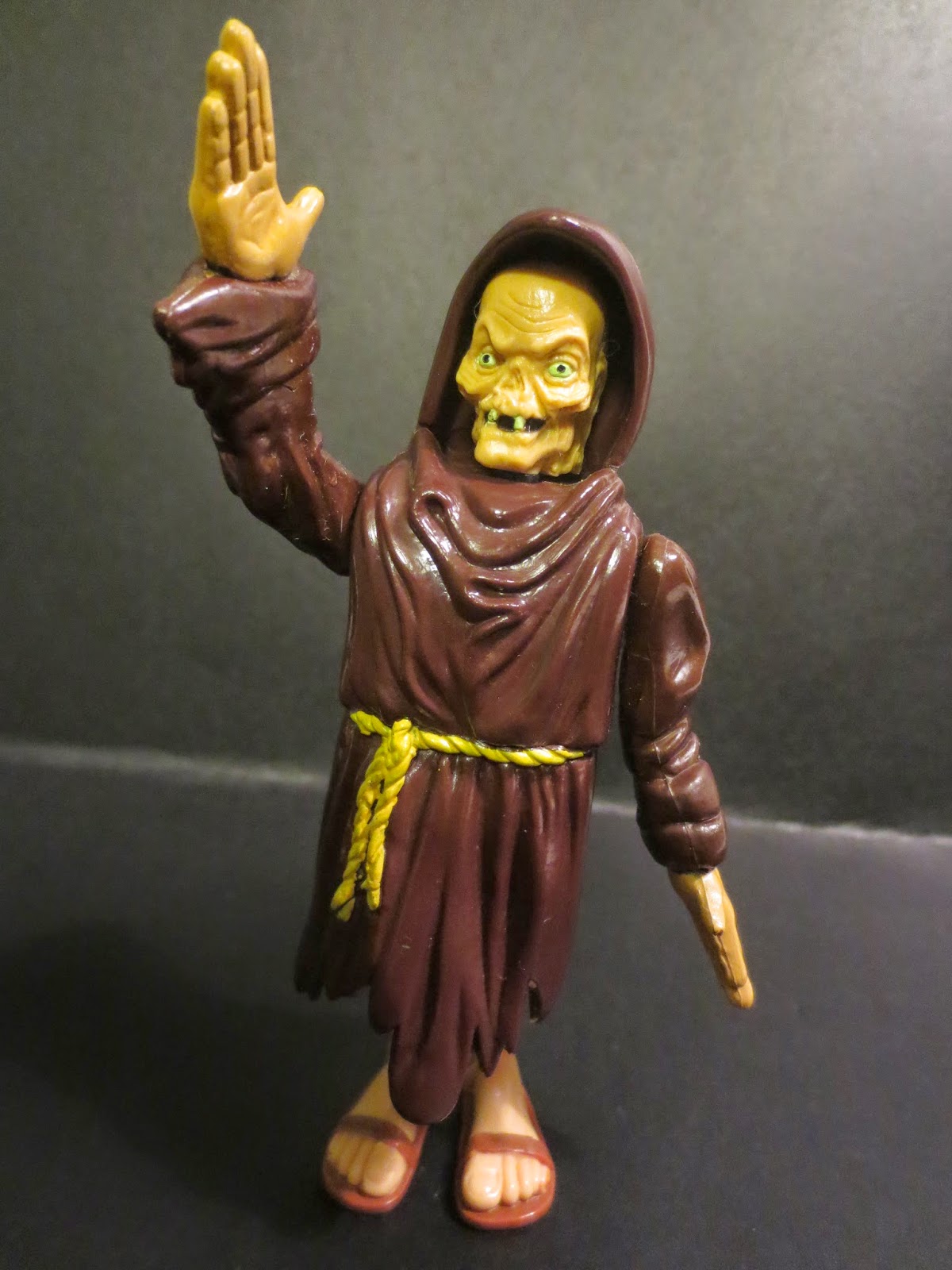 The Cryptkeeper features five points of articulation and an action feature that causes his head to turn and his arms to raise and lower. The points of articulation are: Swivel hips, swivel shoulders, and a swivel head. The arms move fine but the motion of the legs and head are severely limited by the hard plastic robe (which is essentially the figure's body). The action feature is a simple lever activated feature that doesn't work that well. When you move the lever up and down the head kind of swivels to the left or right and the arms raise or lower. I think the point was to mimic the Cryptkeeper talking to the audience, but it just kind of falls flat. I would have rather had no action feature than this poorly executed one. 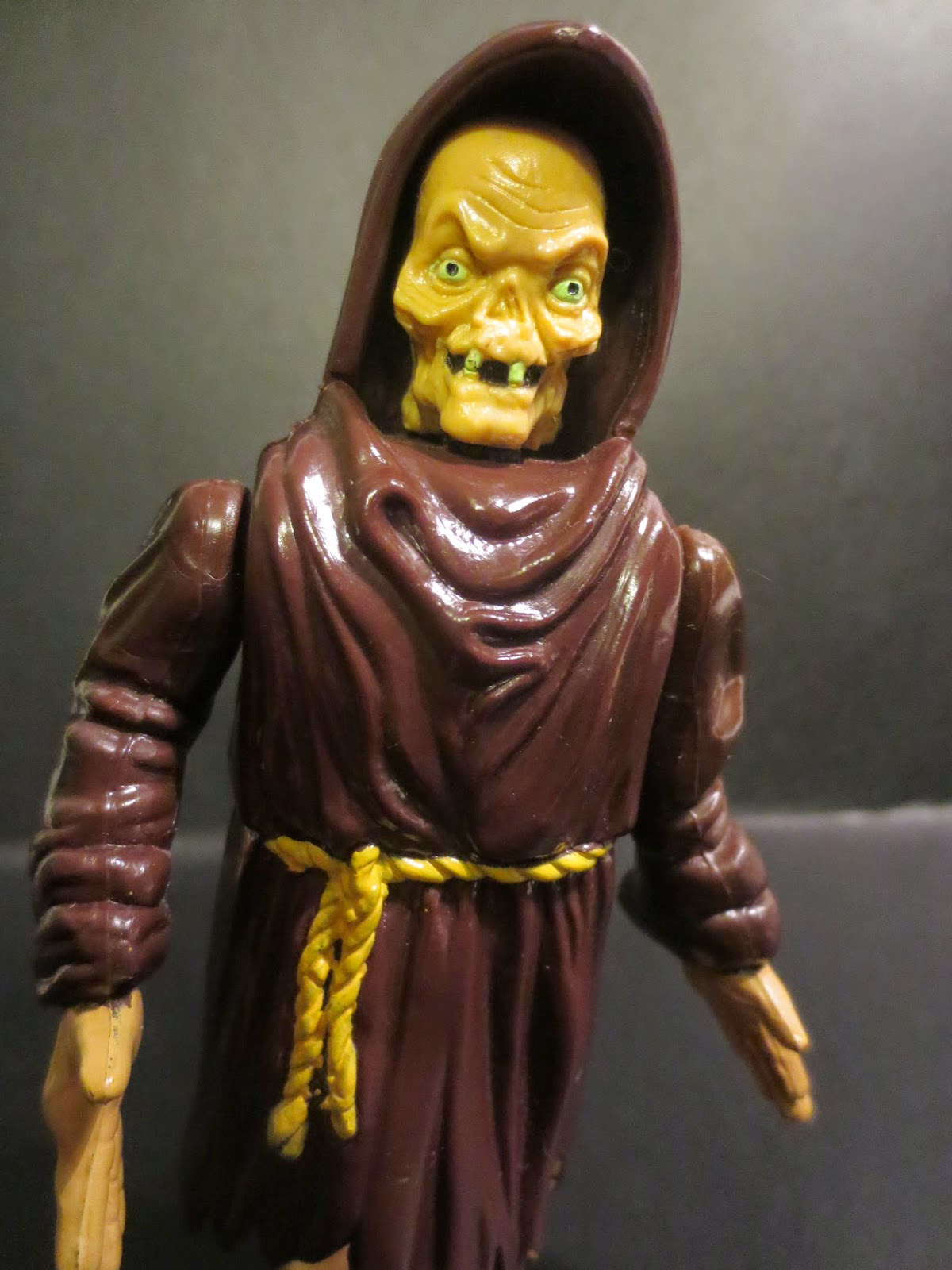 The sculpt, however, is not bad for a fairly low-budget toy that was made about 20 years ago. This is a really good Cryptkeeper headsculpt! The sunken eyes, wrinkled flesh, and rotted away nose are all really grisly and wouldn't look out of place on a more modern action figure. There's even thin, stringy hair on the back of his head! The robe serves as the base body for this figure with the limbs and head attached to it. It's a hollow plastic shell with some decent folds and a simple rope belt. The Cryptkeeper's hands and feet have a much more animated looking design to them, almost as if two different people were working on this toy. 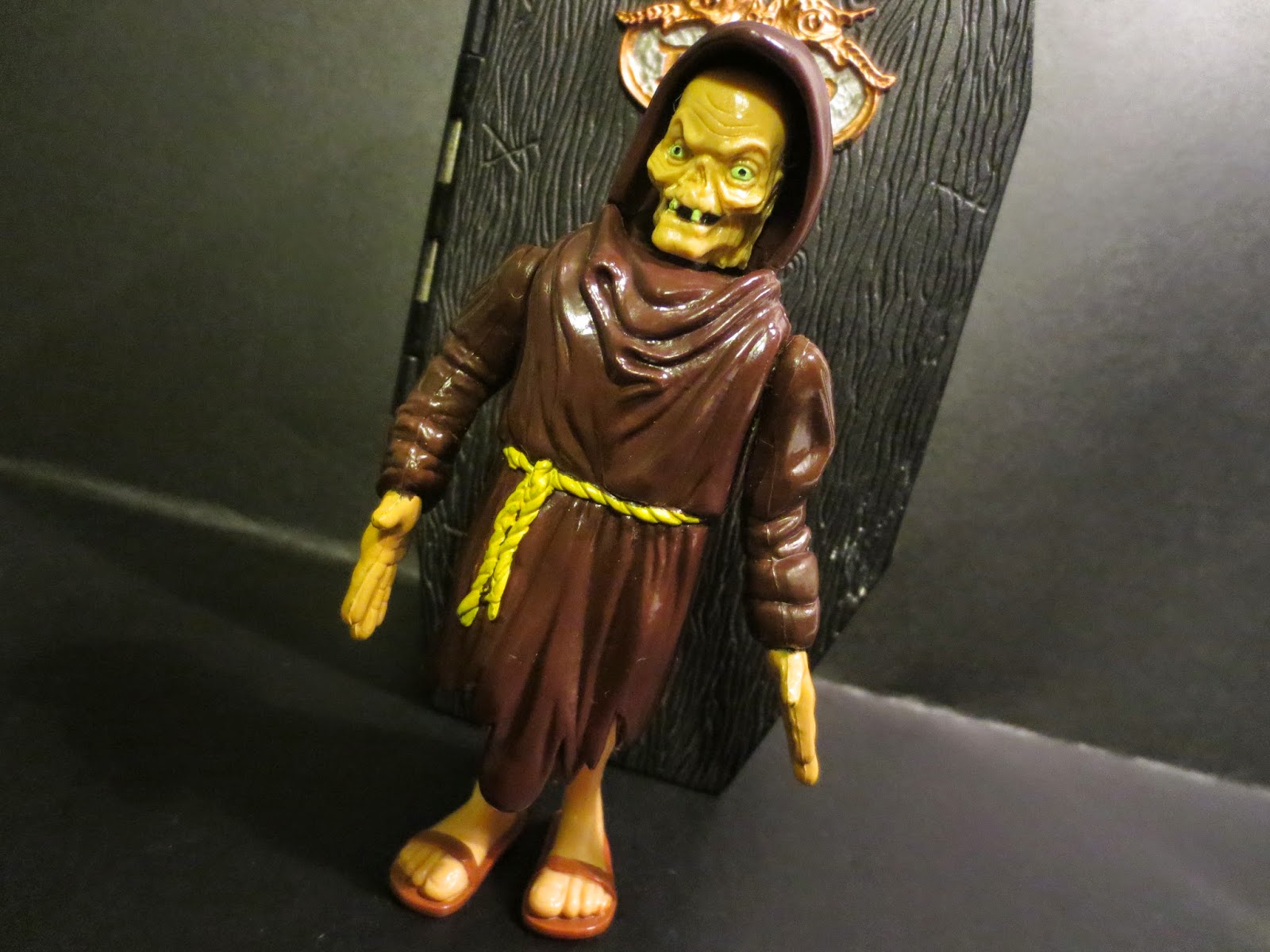 The paintwork is pretty average. Most of the figure is simply molded in the appropriate colors of plastic although there are some painted details. The Cryptkeeper's portrait looks pretty good. His mouth is a bit weird (he has neon green teeth) but his green eyes and silver hair help to convey the character's cadaver like appearance. His belt is simply painted yellow, but it is a bit messy. Lots of brown showing through. His painted on sandals also feature a bit of a blurry mess between the soles and the Cryptkeeper's feet. 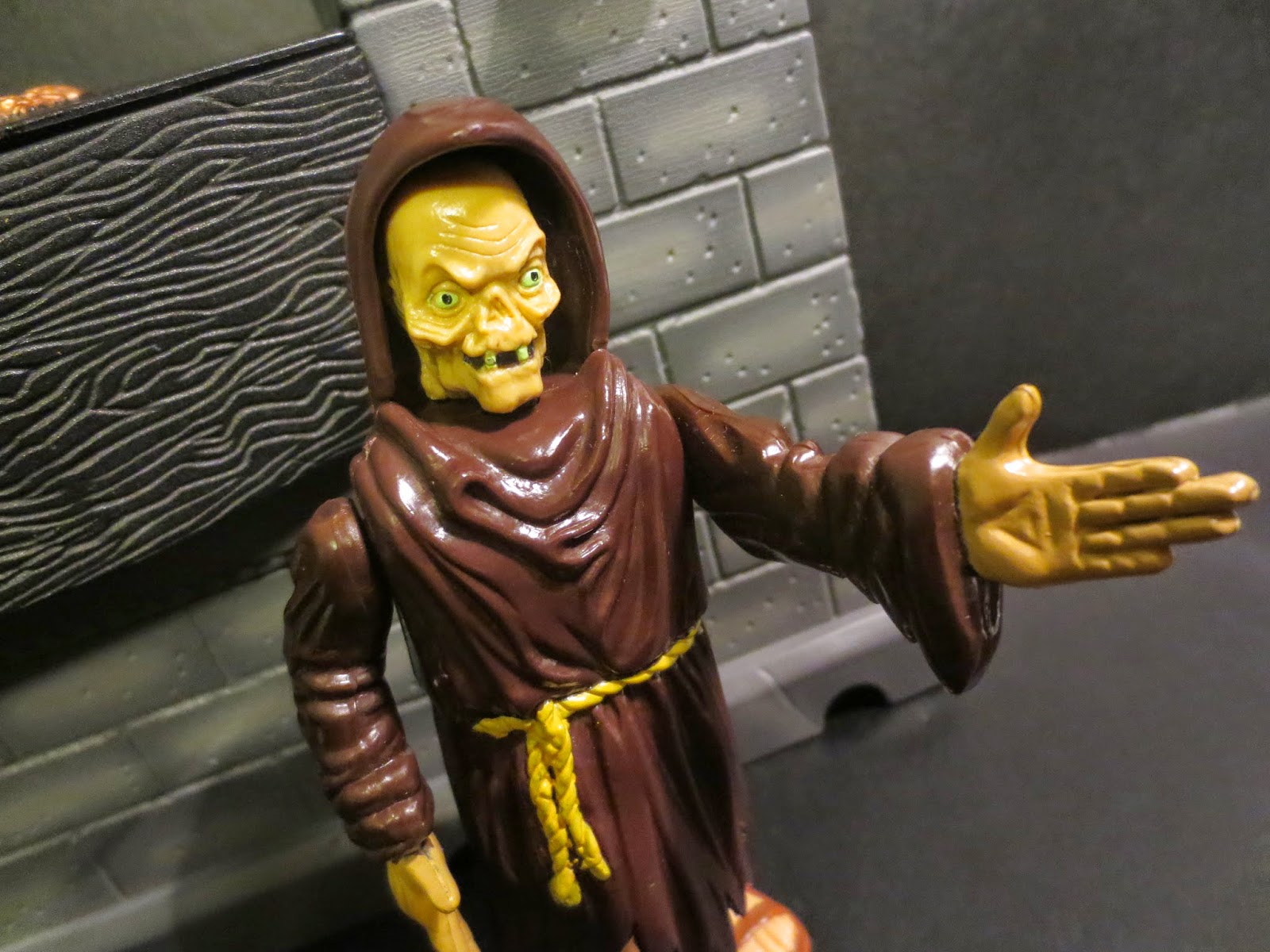 I really wish this figure would have come with something cool such as a candelabra, an over-sized ax, or a skull, but Ace Novelty dropped the ball. What you see here is what you get. 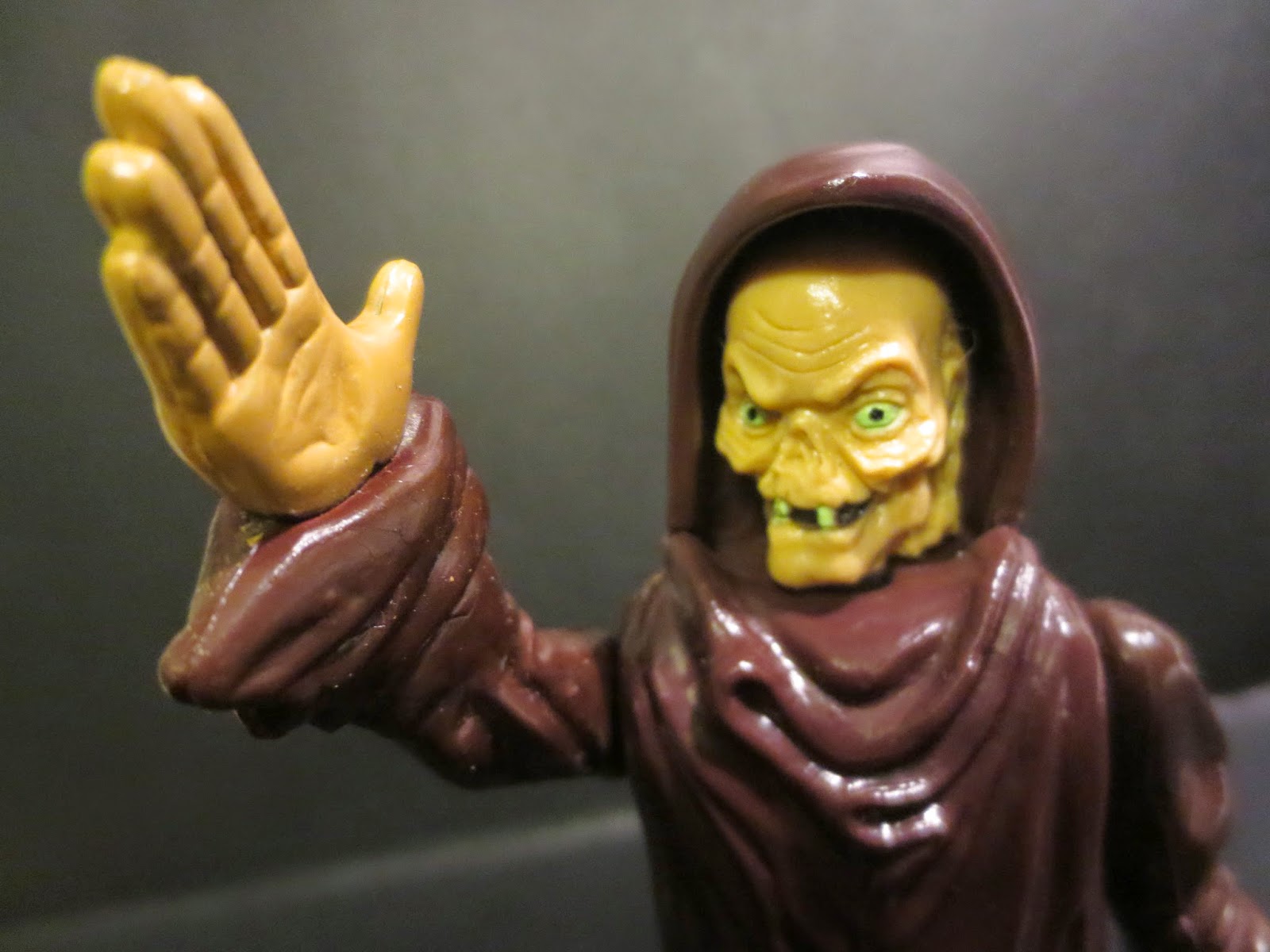 While I only have the vaguest recollections of Tales from the Cryptkeeper being on television, the Cryptkeeper was a huge part of pop culture in the 1990s. While the character had older roots dating back to the EC comics of the 1950s, the Cryptkeeper sort of took over the role that Freddy Krueger had in the 1980s as a comical and terrifying horror host. Even if you didn't watch Tales from the Crypt, you knew who this guy was. Due to how recognizable the character was I can definitely see why Ace Novelty and Nelvana wanted to get some Cryptkeeper merchandise out there. Unfortunately, after doing a figure or two of the Cryptkeeper there wasn't much to work with. We ended up with a line based on a show that had few recurring characters and had to resort to generic versions of the classic monsters (vampire, wolfman, Frankenstein's monster, etc.) to fill out its waves. I remember these guys rotting on clearance racks back in the mid 90s, but looking back at them now I find they have a certain charm. I really do like this version of the Cryptkeeper. He's not a well designed figure by any means, but that headsculpt totally saves everything. If it weren't for that, he'd be totally forgettable. As it is, I'm giving him a Good because A: He has a great headsculpt. B: He isn't broken after 20 years, and C: There just aren't that many Cryptkeeper action figures out there. If you decide you want one of these guys for yourself, just check around online. They can be had for very, very low prices, far below what you'd expect. 6 Feet Below!!! Hahahaha!!!