31 Days of Toy Terror: Eric Draven from The Crow from ReAction Horror Series by Funko 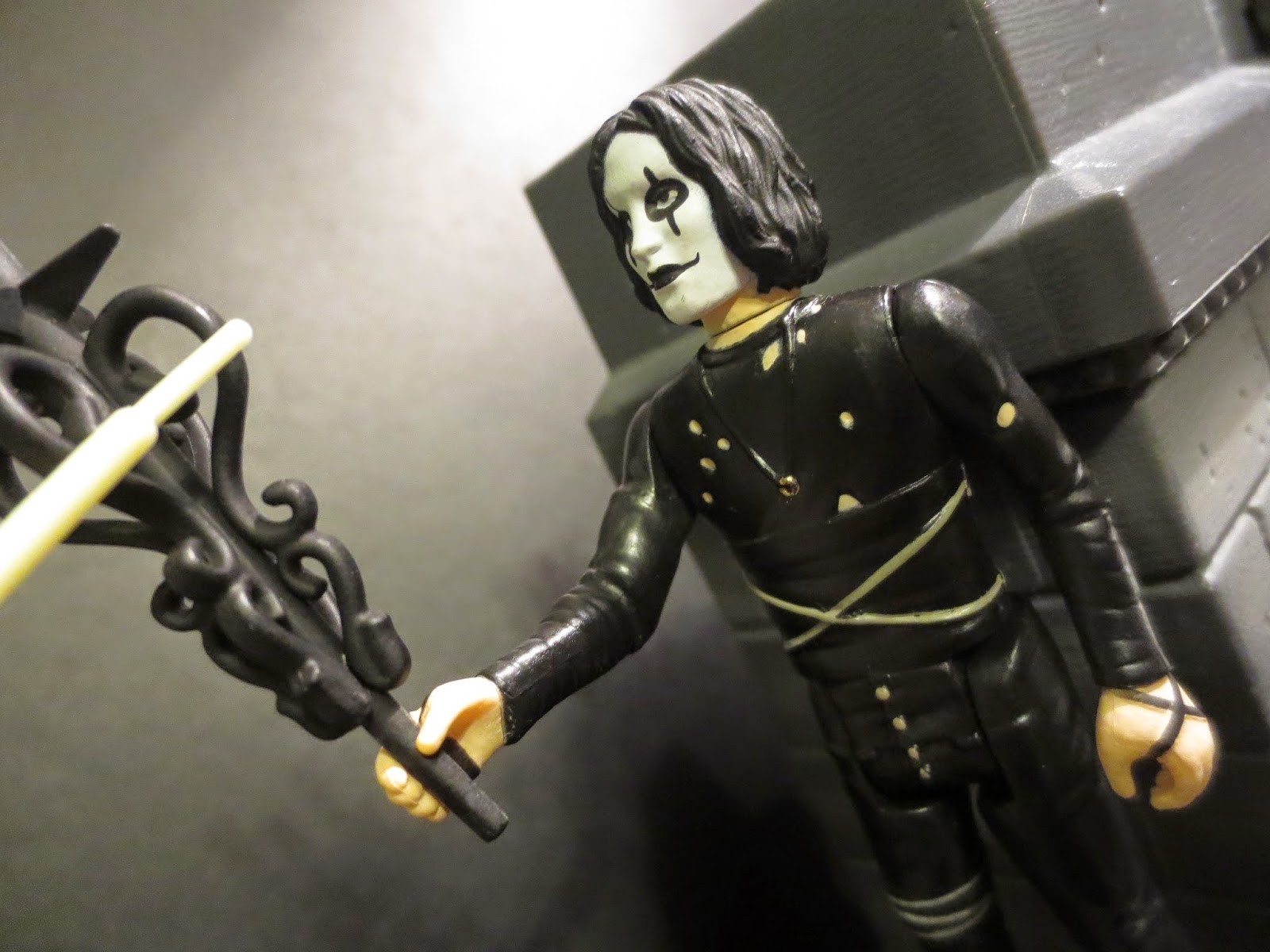 Is The Crow a horror film? Not really. It's much more of a superhero revenge film than a horror film. So, does the Crow, Eric Draven, fit in Funko's ReAction Horror Series? I'd say so. Yeah, he doesn't seem like the kind of guy who would keep accompany with the likes of Freddy Krueger, Jason Vorhees, and Michael Myers, but I guess they do have a history together. McFarlane Toys put Eric Draven in the second series of Movie Maniacs while NECA included multiple versions of Eric Draven in their Cult Classics line. Funko is just doing what McFarlane discovered with Movie Maniacs: It's much easier to sell a toyline filled with the A-list characters people want rather than to try and flesh out a line containing only one or two characters people care about. It's a strategy that works well and my only suggestion to Funko would be to create a better name. Rather than just the generic "Horror Series." We've had Silent Screamers, Cult Classics, and Movie Maniacs, so maybe this series should have been called Funko Frights? Funko Fear? Fears and Frighteners? Seriously, Funko: Just send me some free toys and you can use any of these you want. Ready for a look at Eric Draven, AKA the Crow? Then join me after the break... 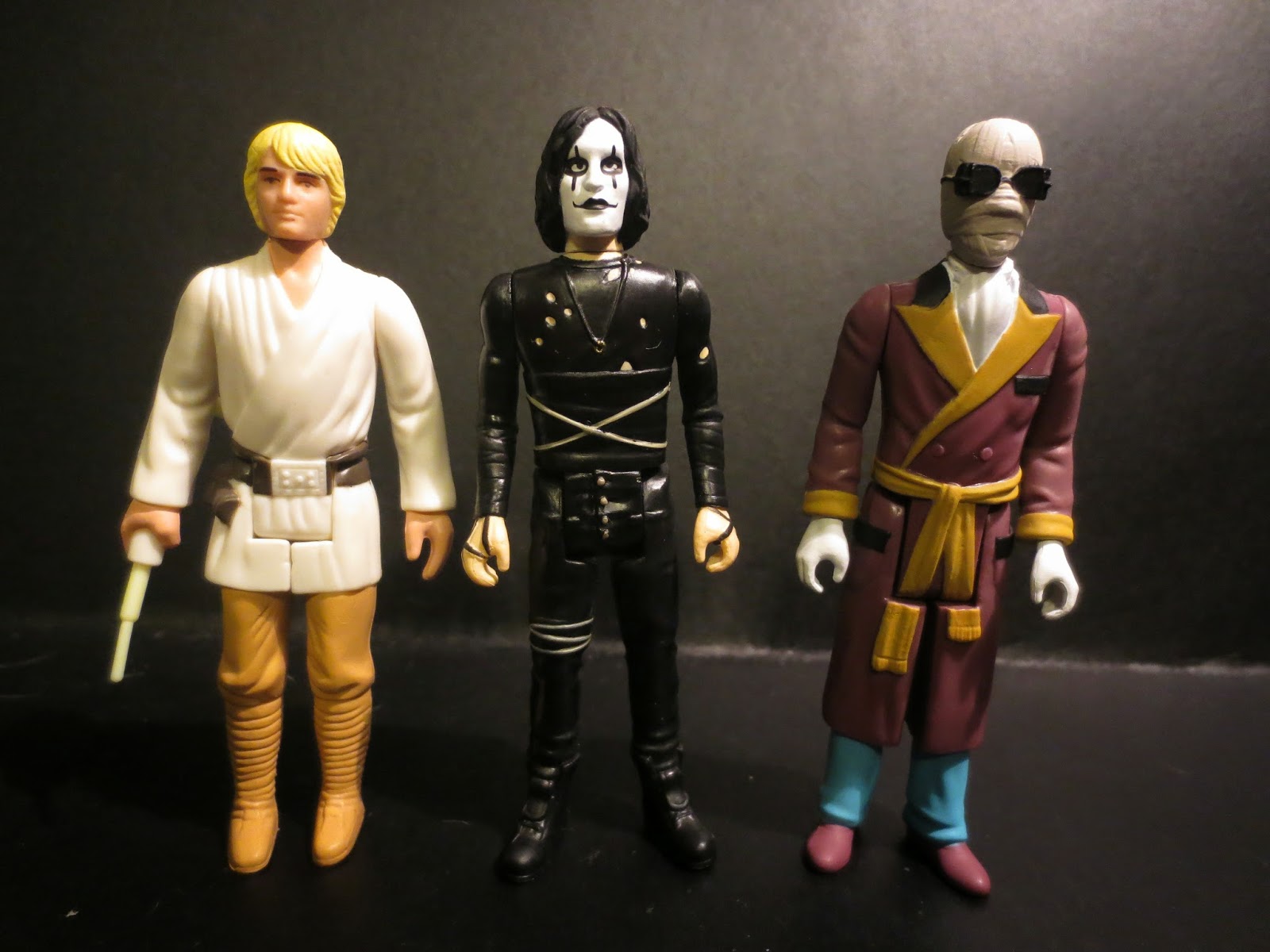 While The Crow came out in 1994, Eric Draven hear definitely looks like a product of the 1980s. That's par for the course with the ReAction line, though, as it is meant to capture the style and appeal of the classic Kenner Star Wars figures. Yeah, other toy lines looked like this as well, but everyone really knows that Star Wars was where the action was. Eric measures in around 3 7/8 inches tall. 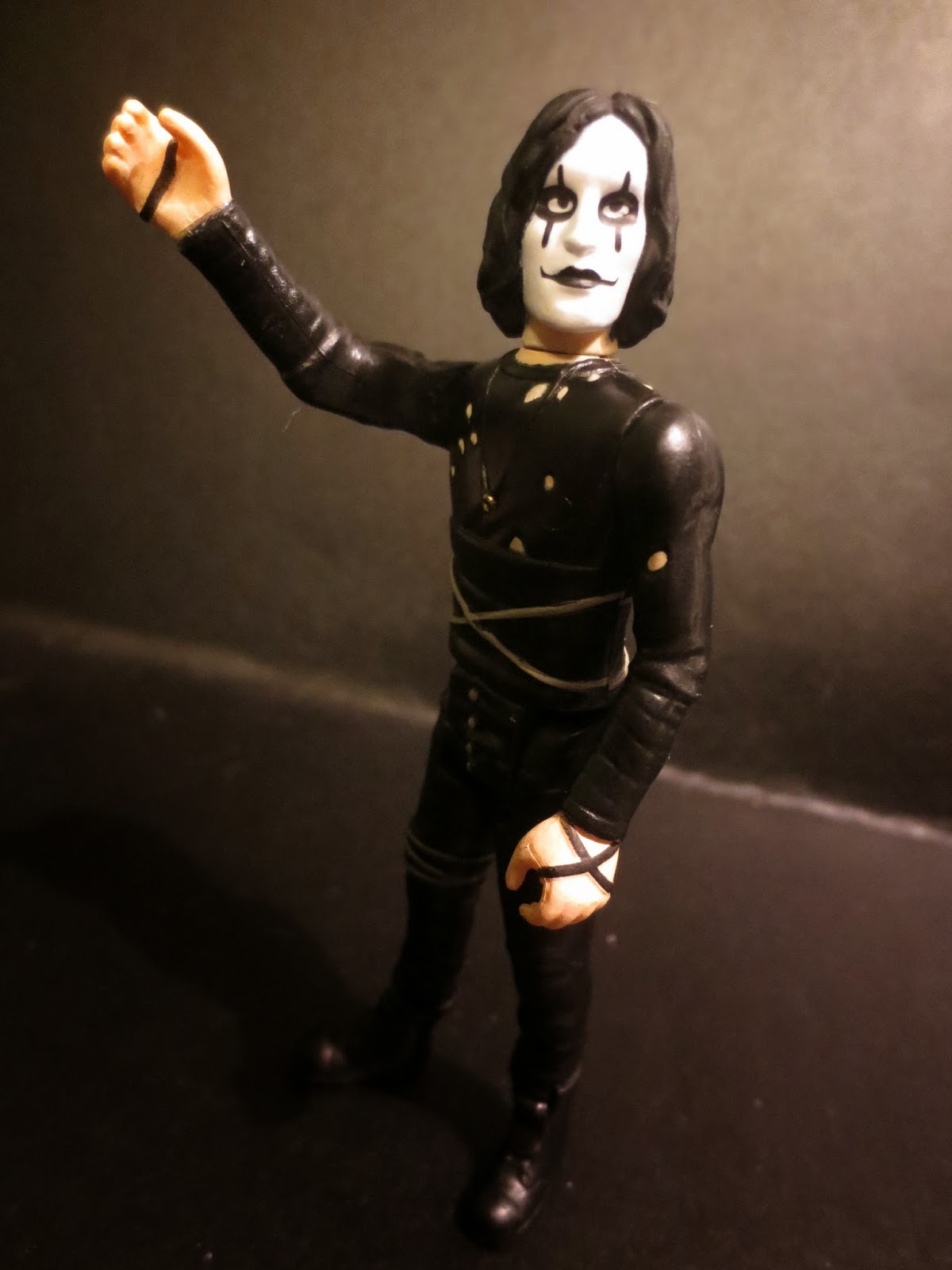 The articulation is easy to write up on these ReAction figures: Swivel hips, swivel shoulders, and a swivel neck. Seriously, if you don't realize this by now then you're just not paying attention! 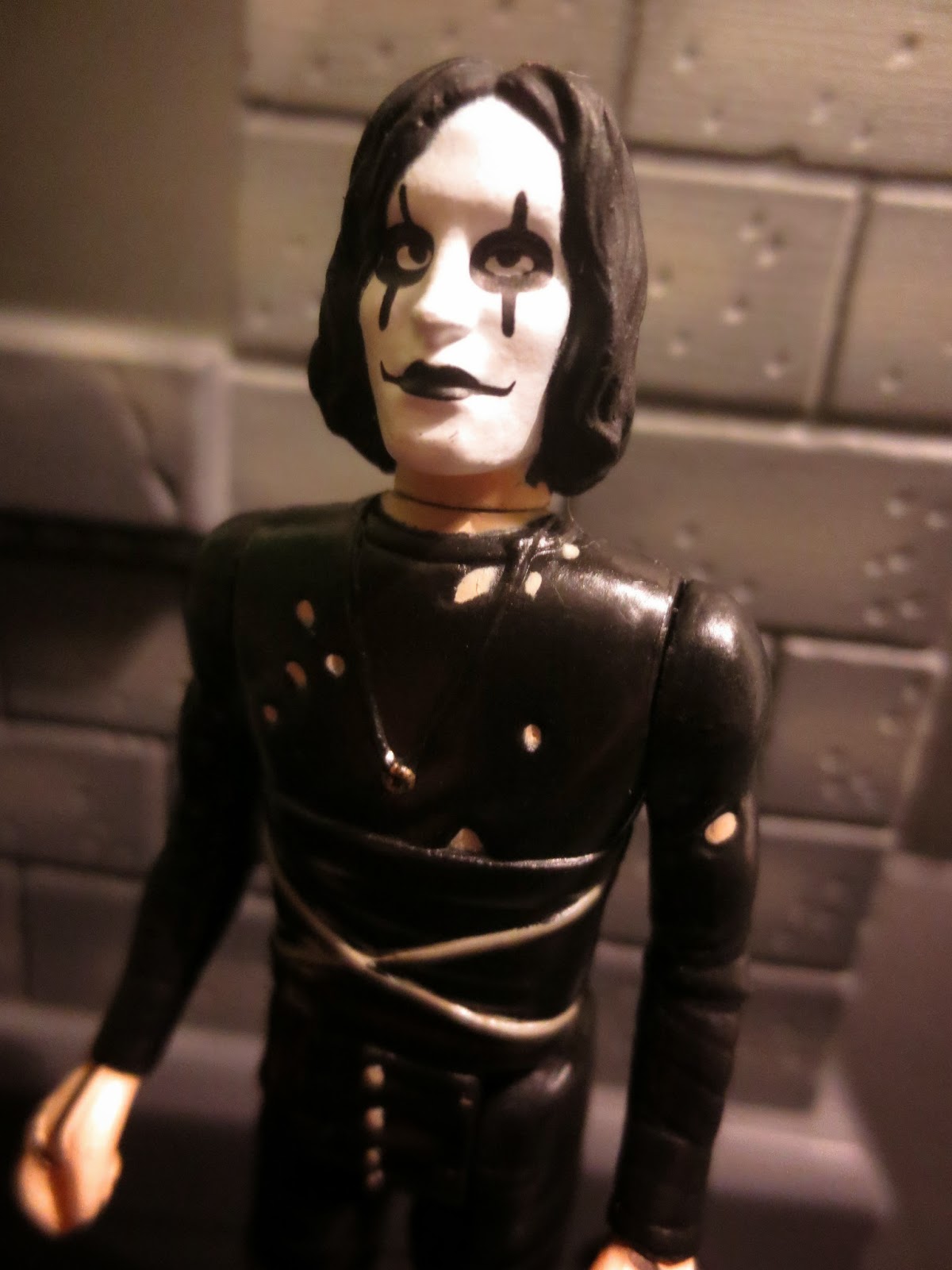 The Crow single-handedly inspired every outfit you've ever seen at a Hot Topic since the mid 90's and his cool, goth outfit is captured well here. It's made a lot simpler, but it works. Funko chose to represent Draven without his trenchcoat, and I think that was a smart choice. This guy captures all of the staples of goth clothing that I know: Random ropes and cords, odd black boots, tight shirts, random buttons, and long sleeves stretching over the fingers. The headsculpt captures the ReAction philosophy quite well: It is instantly recognizable but doesn't really look like the late Brandon Lee. I do like the little tears and holes in the clothing that are sculpted details, but my favorite thing is the engagement ring Draven is wearing on a cord around his neck. It nicely captures the sweetness and heart of the Crow that helps it stand out as something more than a goth revenge fest. 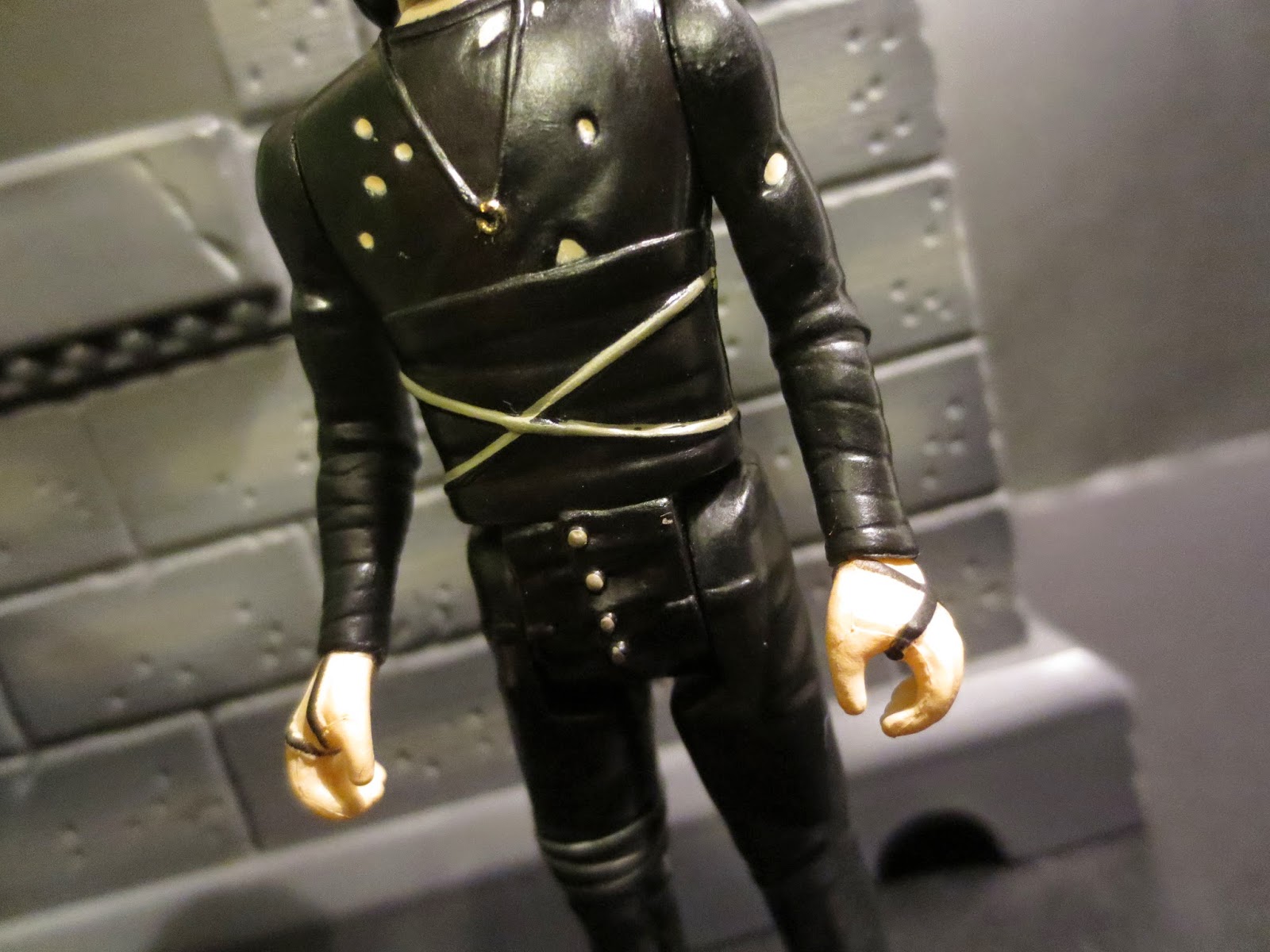 The paint scheme is black, black, and more black. Actually, there are some nice details such as the above mentioned ring, the harlequin styled face paint, and the various cords wrapped around Eric's torso and thigh. Everything, even the little tears and bullet holes, is very clean. I'm not completely sold on the eyes (they're a little too big) but it does fit in this style. 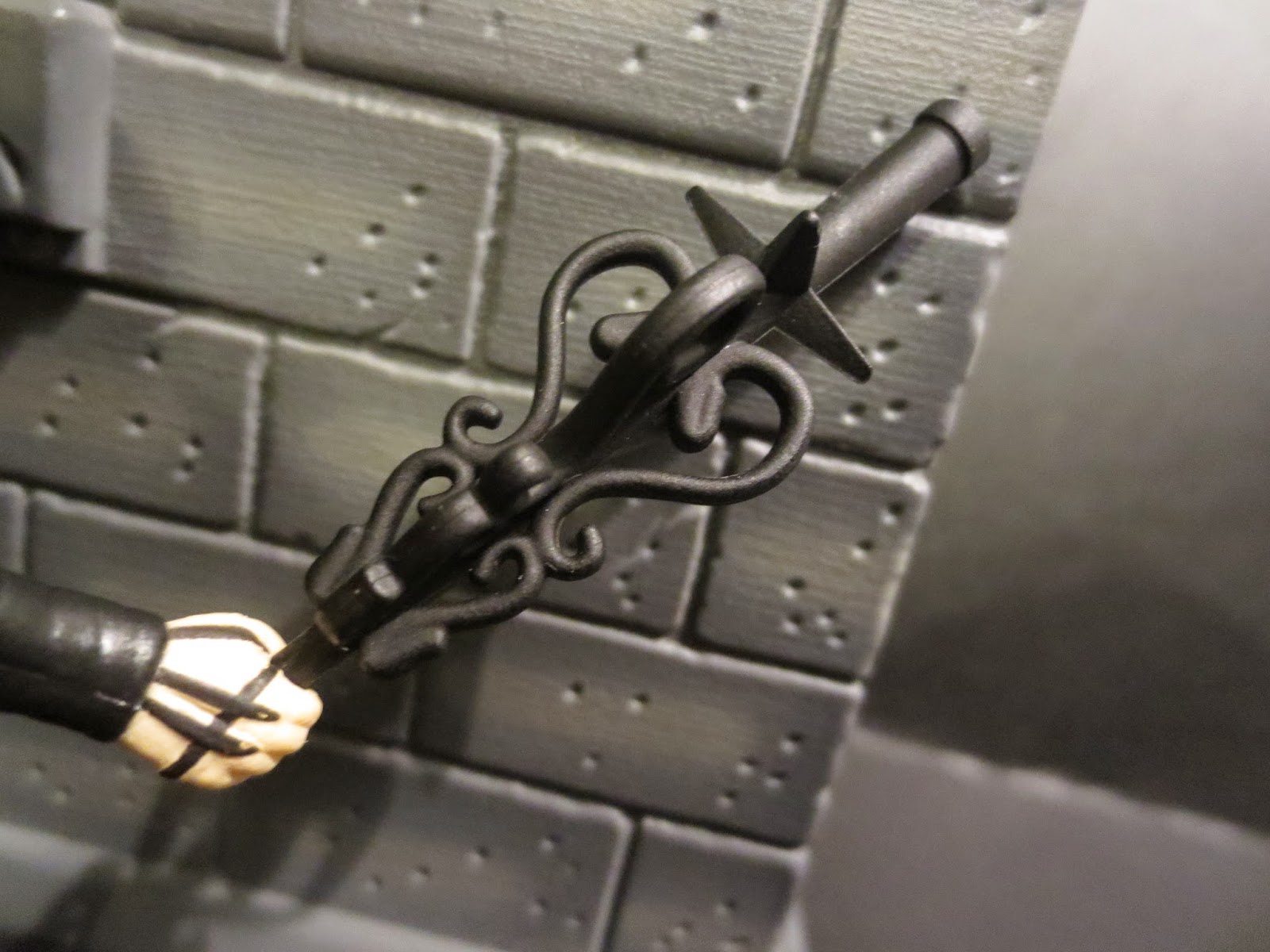 I love the accessory that comes with this figure: It's the weather vane that Eric uses when fighting Top Dollar on the roof of a church during the film's climax. It makes sense and looks really, really cool. It's still a simple piece, but quite nicely handled. 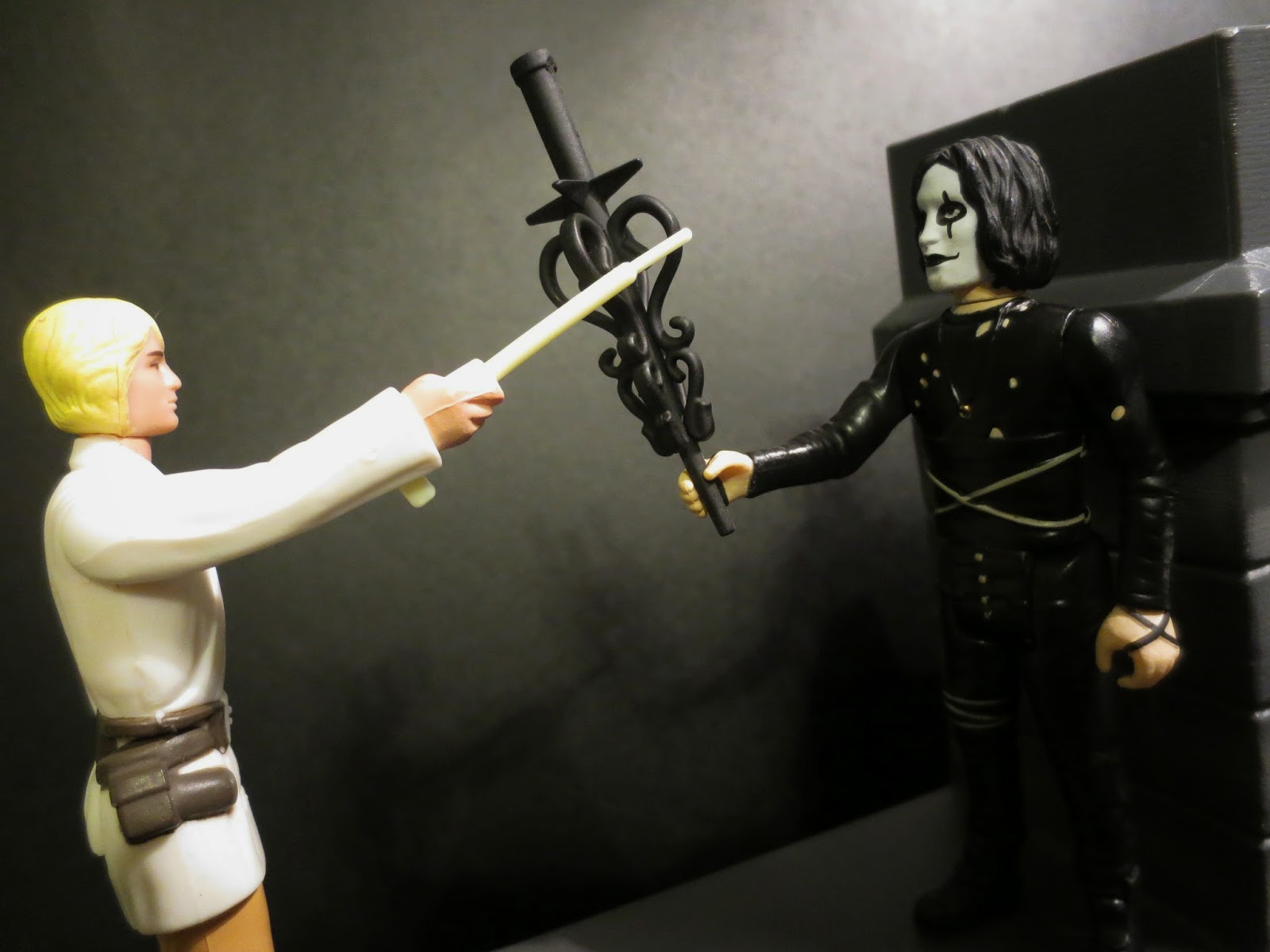 I feel like Eric Draven is definitely the odd man out in this series. With the other characters in the series being Pinhead, Sam from Trick 'r Treat, Jason Voorhees, Freddy Krueger, Michael Myers, and Ghostface from Scream, Eric Draven just doesn't quite fit in. Still, I think he belongs simply because he is one of those characters that people just know whether or not they have even seen the film and associate with horror and Halloween. This is a good figure that nicely captures the retro style Funko is aiming for. I originally intended to skip him but changed my mind after getting the rest of these and seeing just how cool they are. I'm easily giving Eric Draven a Great. While other companies like McFarlane, NECA, and even Hot Toys have went to great lengths to capture the haunting presence that Brandon Lee brought to the film, Funko simply reminds us that there is a lot to be said for characters who we just come to know and love simply based on a cool visual appearance, something which the Crow pulls off in spades.