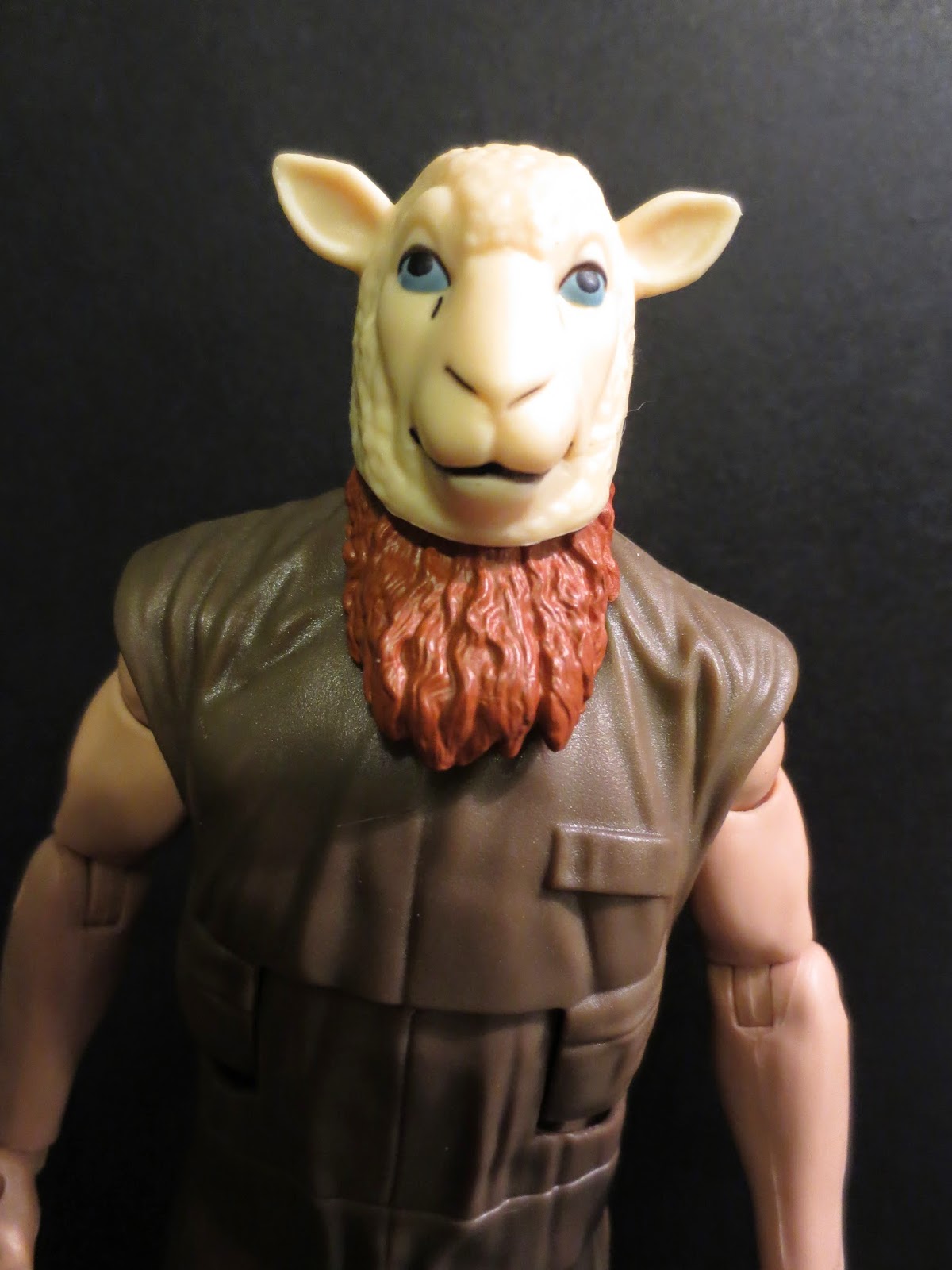 Today's entry in 31 Days of Toy Terror is a little different. While I've never been a huge wrestling fan I did end up watching Wrestlemania this past year with a few of my fellow Epic Reviewers and was really impressed by the super creepy Wyatt Family. These guys really set themselves apart from the rest of the crowd and their horror themed gimmick definitely appealed to me. It reminds me of something that would have happened during the more gimmick themed wrestling era of the 1980's. I've never bought a wrestling action figure before but I decided I had to have the Wyatt Family. Consisting of Bray Wyatt and his two "sons," Luke Harper and Erick Rowan, the Wyatts are just your typical backwoods, psychotic cultists that like to wrestle. Today I'm looking at Erick Rowan, Bray Wyatt's second "son" and the strong, silent guy who wears a creepy sheep mask. Whether you're into wrestling or just like creepy guys in animal masks and coveralls, you'll definitely want to stick around after the jump... 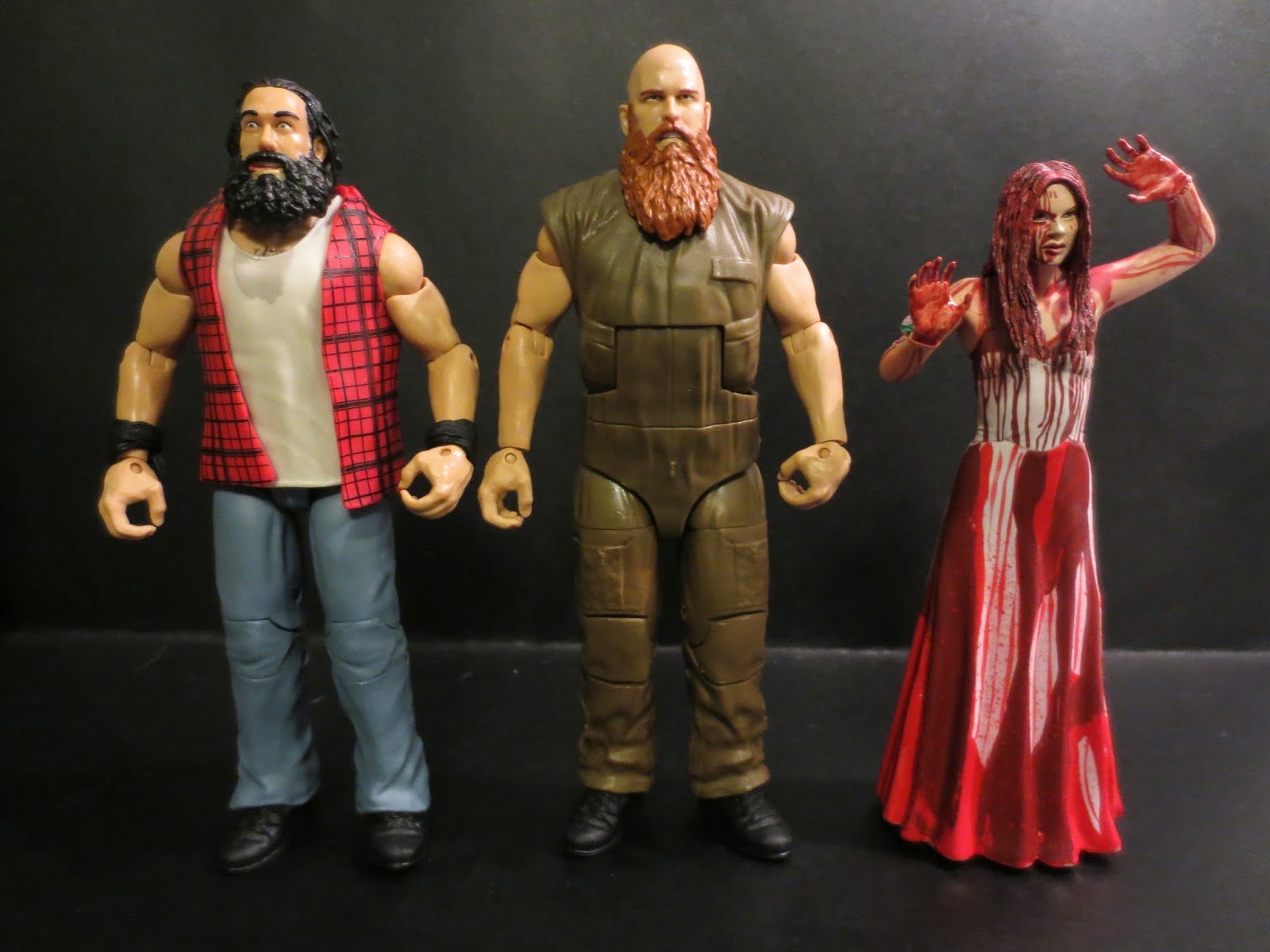 Erick Rowan is a tall action figure! Standing at 7 5/8ths inches tall, the massive size of the figure seems to properly capture Rowan's 6 ft 8 in. stature and his 315 lb. frame. Mattel offers a few different types of wrestling figures and it was in their more basic line that they released a two-pack of Rowan and his tag team partner Luke Harper earlier this year. This figure comes from the WWE Elite Collection, however, and features much better articulation and a few cool accessories. The figures come in sturdy cardboard boxes that nicely show off the figure as well as feature a paragraph or two about the included wrestler. While these guys don't have the same level of realism as an action figure from someone like NECA, they still have a great look that should let them fit in well with a diverse body of lines. I could see these guys hanging out with Marvel Legends, DC Collectibles or DC Universe stuff, or even Masters of the Universe Classics. 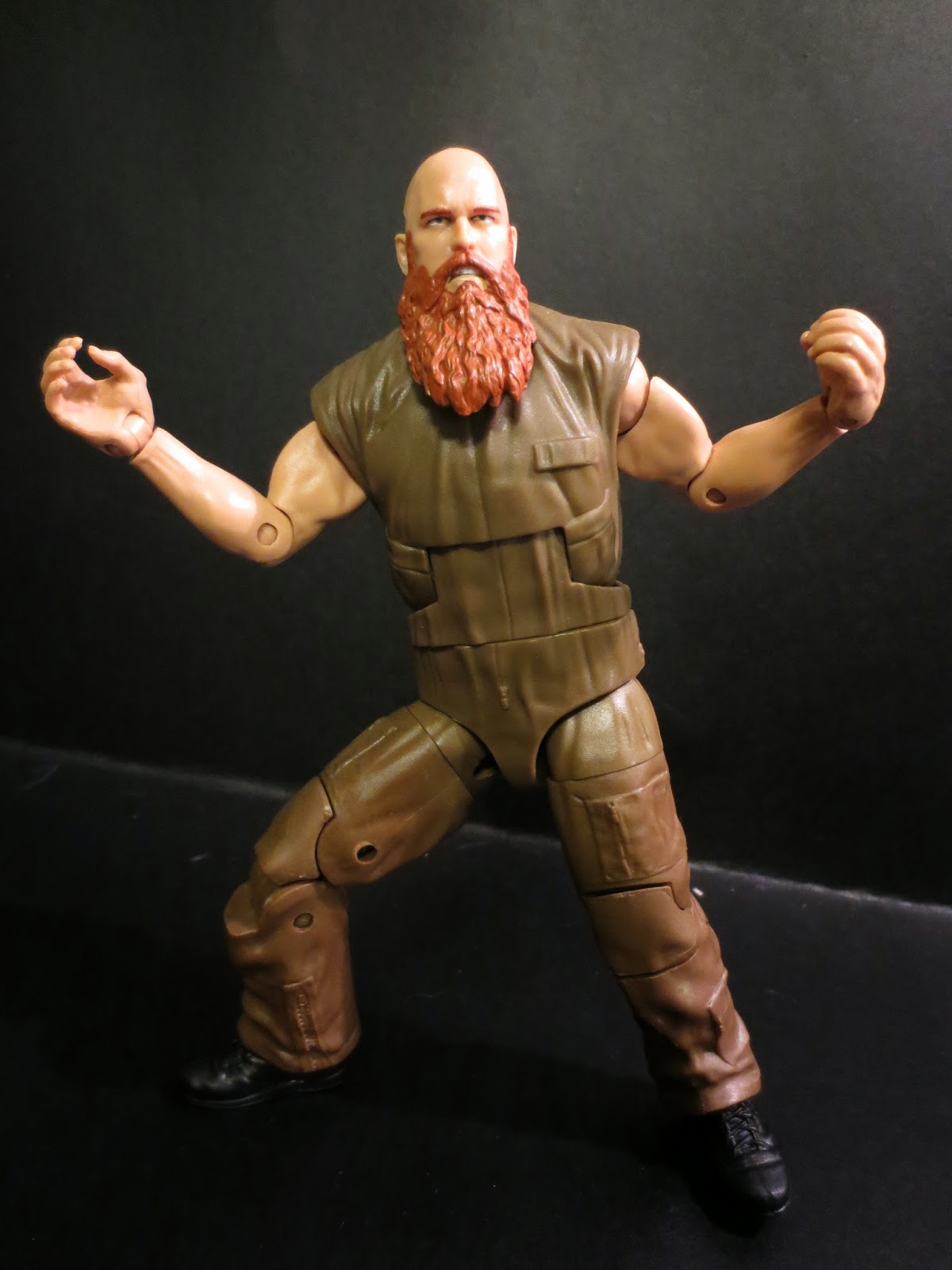 Rowan features the following points of articulation: Ball jointed ankles with lateral rockers, double hinged knees, swivel thighs, ball jointed hips, a swivel waist, a hinged abdomen, swivel/hinge shoulders, swivel biceps, hinged elbows, swivel/hinge wrists, and a ball jointed head. That's a great amount of articulation and all of it is nice and sturdy. Seriously, this feels like you could really give this to a kid and have no problems with breakage! While the jumpsuit definitely looks odd broken up with all of that articulation, it doesn't limit the amount of crazy wrestling moves this guy can do. This guy is rather impressive. 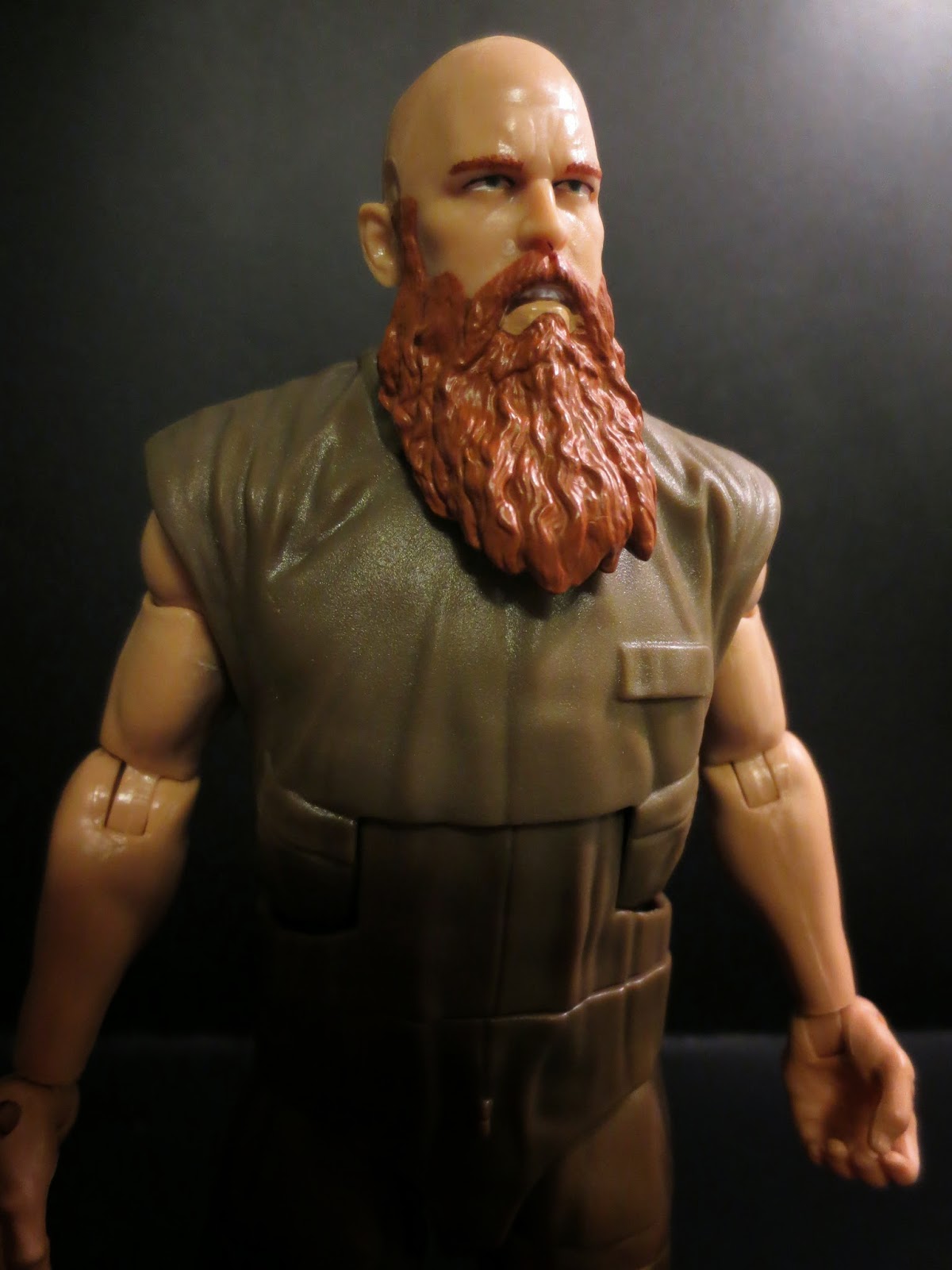 Erick Rowan has a fairly simple outfit that was translated well into action figure form. He's wearing a set of sleeveless coveralls with various pockets and zippers. Many of the details are a bit soft but they're there, including zippers on the interior ankles, cargo pockets with zippers, and lots of wrinkles and folds. As I mentioned above, the articulation does make the figure look odd in certain poses, but that's just the cost of doing business. The head sculpt is great and features Rowan's (real name Joseph Ruud!) majestic red bear. He has a great scowl on his face with just a bit of teeth showing. 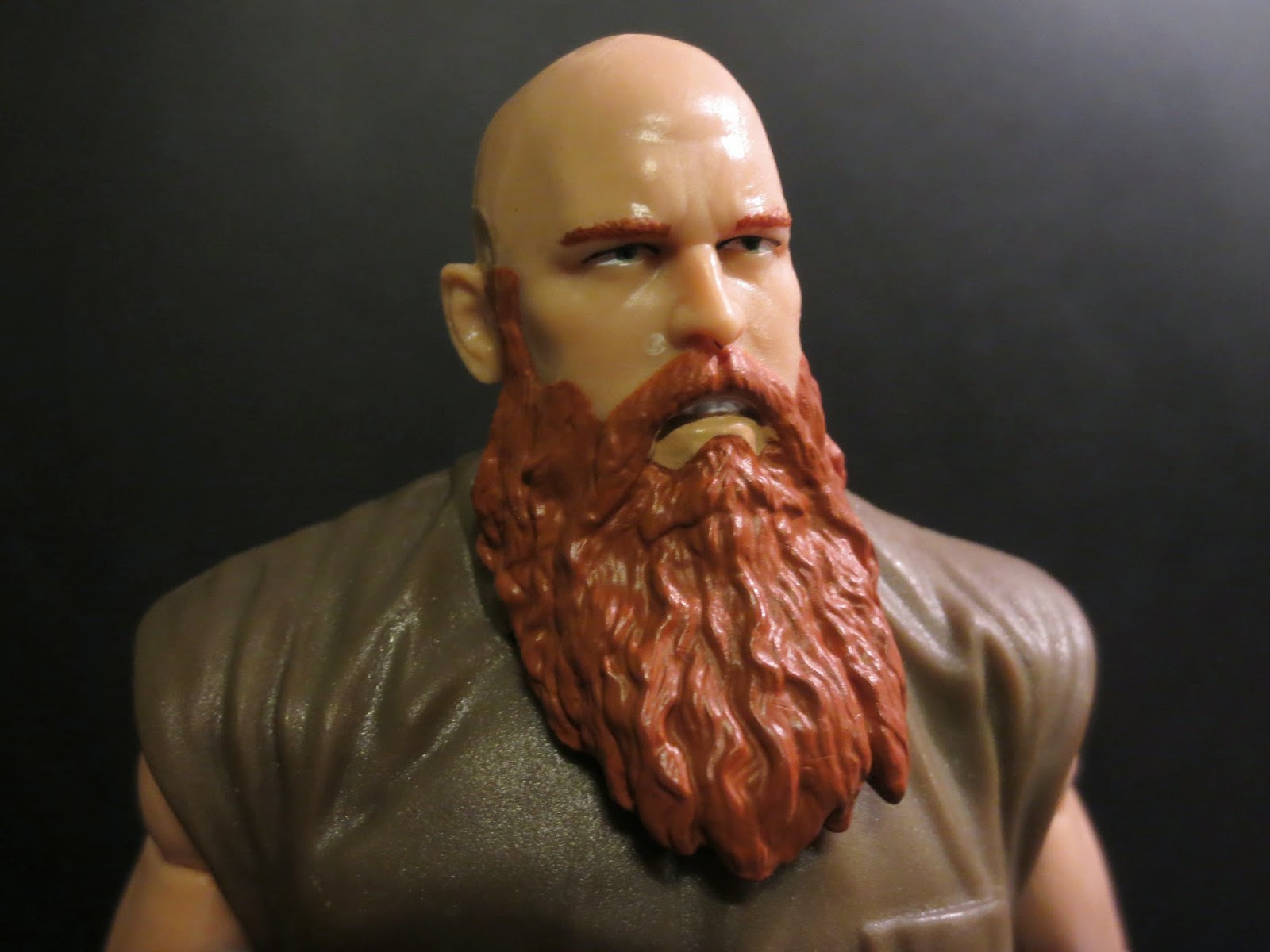 The paint work is pretty basic as most of the figure is molded in the appropriate colors. The suit is molded in a light brown, the boots are black, and Rowan's flesh is molded in a Caucasian flesh-tone. The only real paint is on the beard and face, all of which is neat and clean. A wash on the suit might have been nice, though. 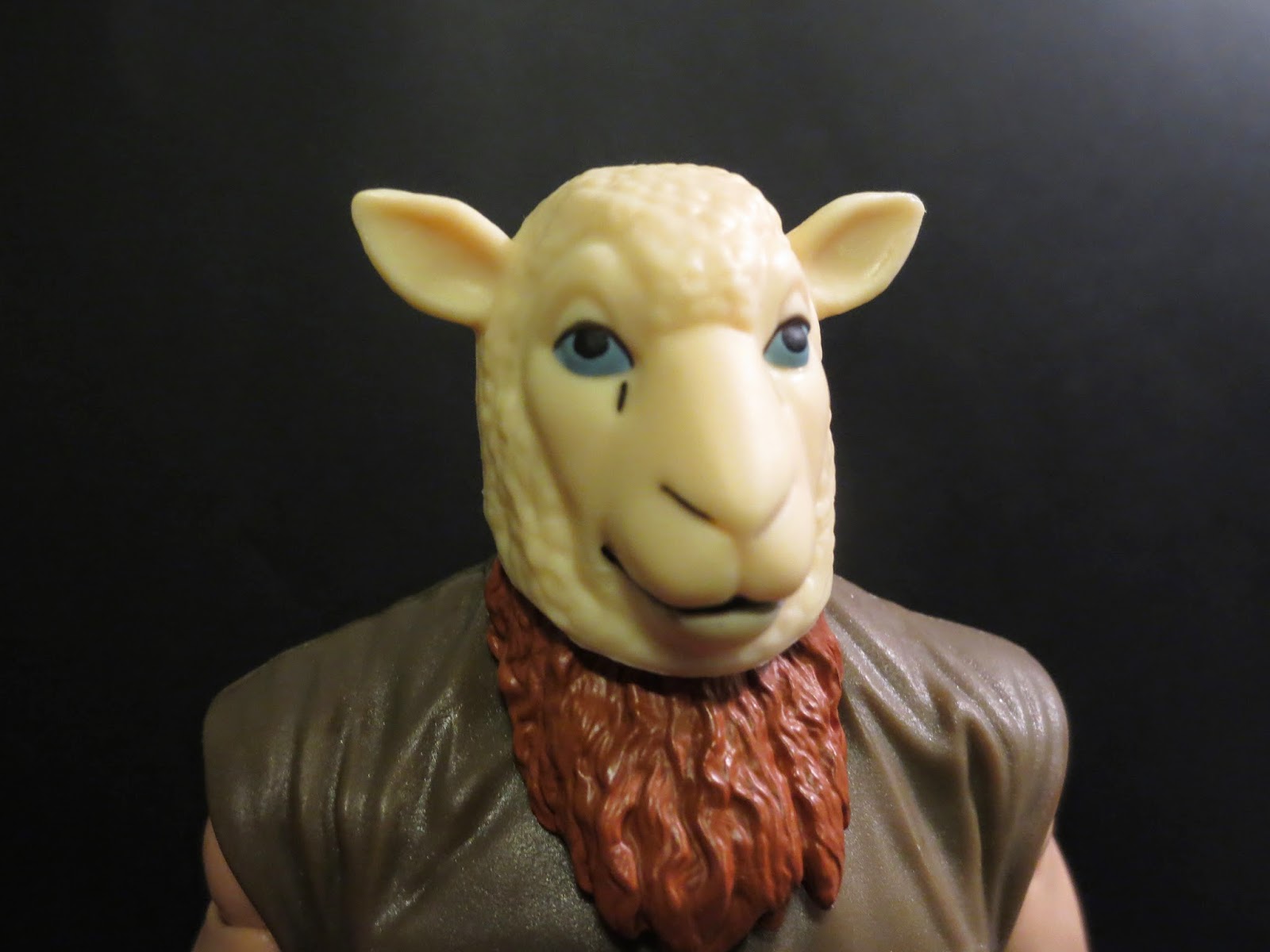 Erick Rowan comes with two accessories. The first is a really cool sheep mask that fits very snugly over his face. While it has some nice paint details, I do wish it looked a bit more rugged and beat up like the actual mask that Rowan wears out to the ring (that mask is a simple plastic mask held on with a string). Still, this turned out quite nice and he really looks rather creepy when wearing it. It definitely makes him fit in well with your Movie Maniacs toys. 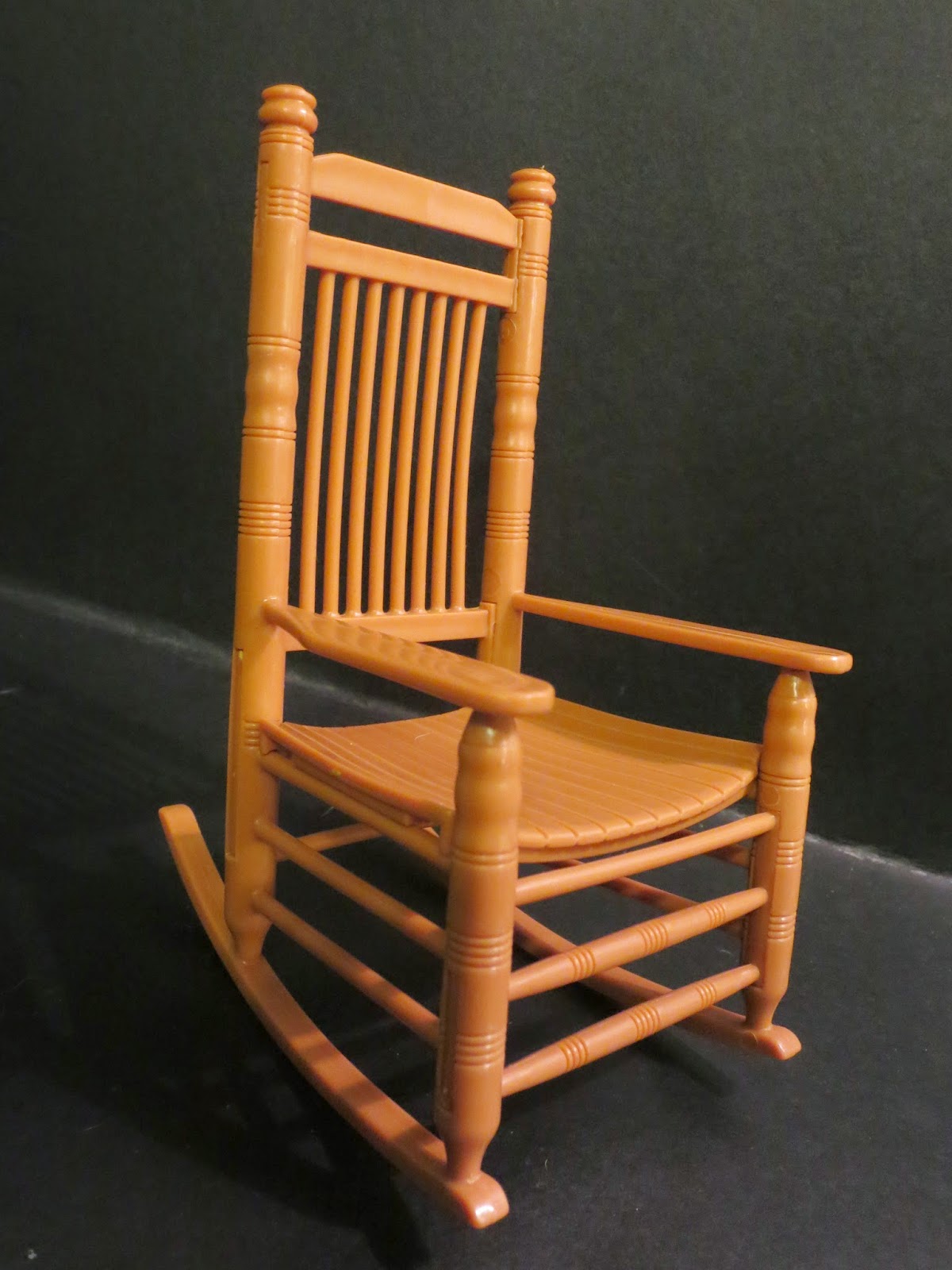 I love when we get an outside that is really out of the box. Well, a rocking chair is a rather out of the box accessory. Part of the gimmick for the Wyatt Family is that when Erick Rowan and Luke Harper wrestle, they'll bring out a rocking chair for family leader Bray Wyatt to sit in. Rowan comes with that rocking chair! It looks awesome and comes in five separate pieces. While Bray Wyatt has a little difficulty sitting in it (the WWE Elite figures are more designed to hit people with chairs rather than sit in them), a little finagling makes will get him to look awesome in this. Rather you want to reenact a Wyatt Family match or have your characters hang outside of a Cracker Barrel, this rocking chair is well worth getting. 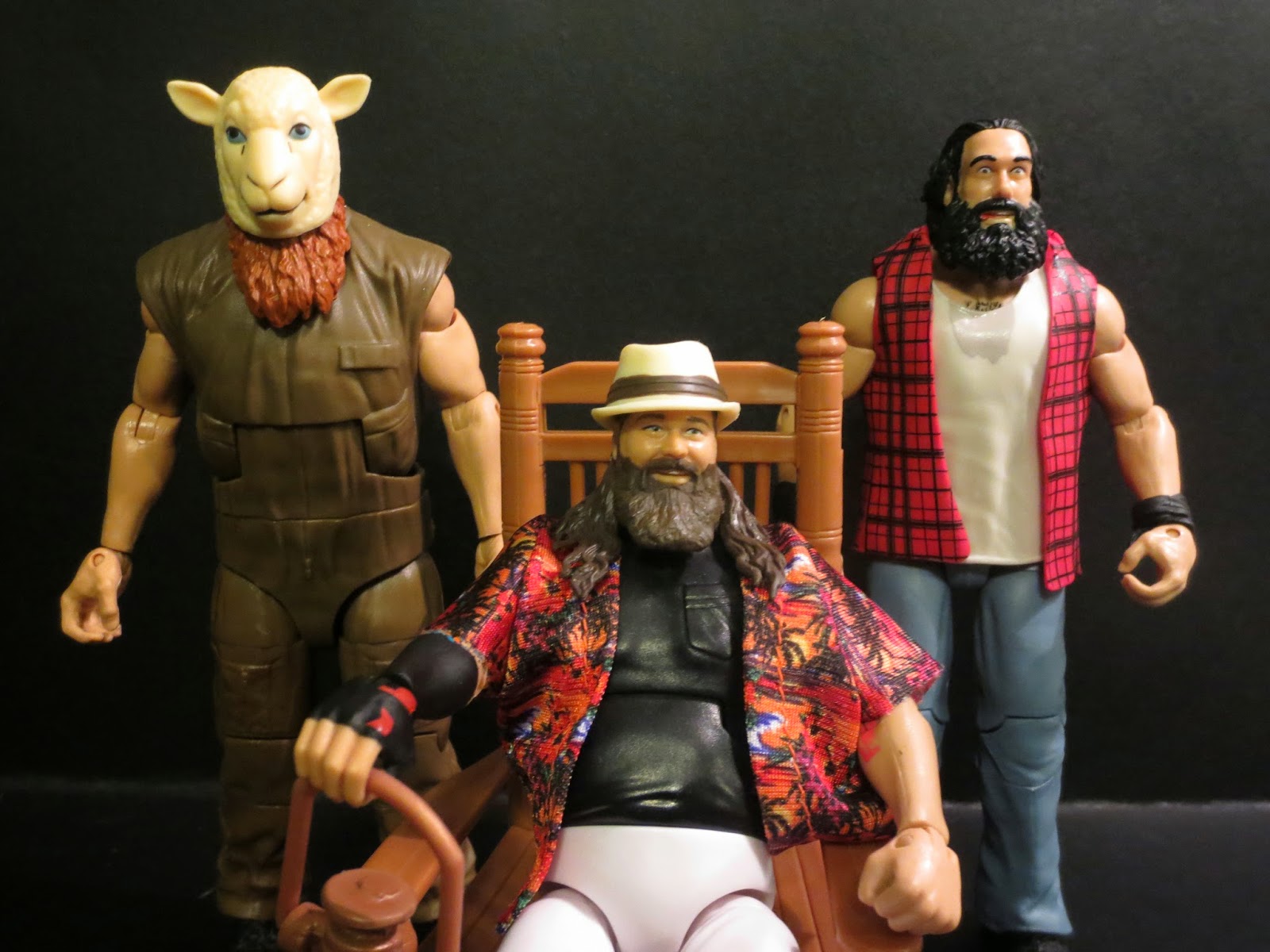 Erick Rowan is an exceptional action figure. While I wish there was a bit more paint detail on the coveralls and sheep mask, this guy is still really an excellent toy. Some nice sculpting, useful and durable articulation, and two amazing accessories definitely make this feel like a toy worthy of your attention. While I do like the Wyatt Family quite a bit, just the fact that Rowan's appearance perfectly fits the archetype of a backwoods killer from a random horror film or haunted house makes this a figure worth considering for horror fans. He looks great on his own and only grows more awesome when surrounded by his family. I'm giving him a Great and a 1/2; Mattel has really impressed me with their WWE Elite Collection and while I doubt I'm likely to start collecting wrestling figures beyond the Wyatt Family, I'll definitely be paying more attention to what they are doing. 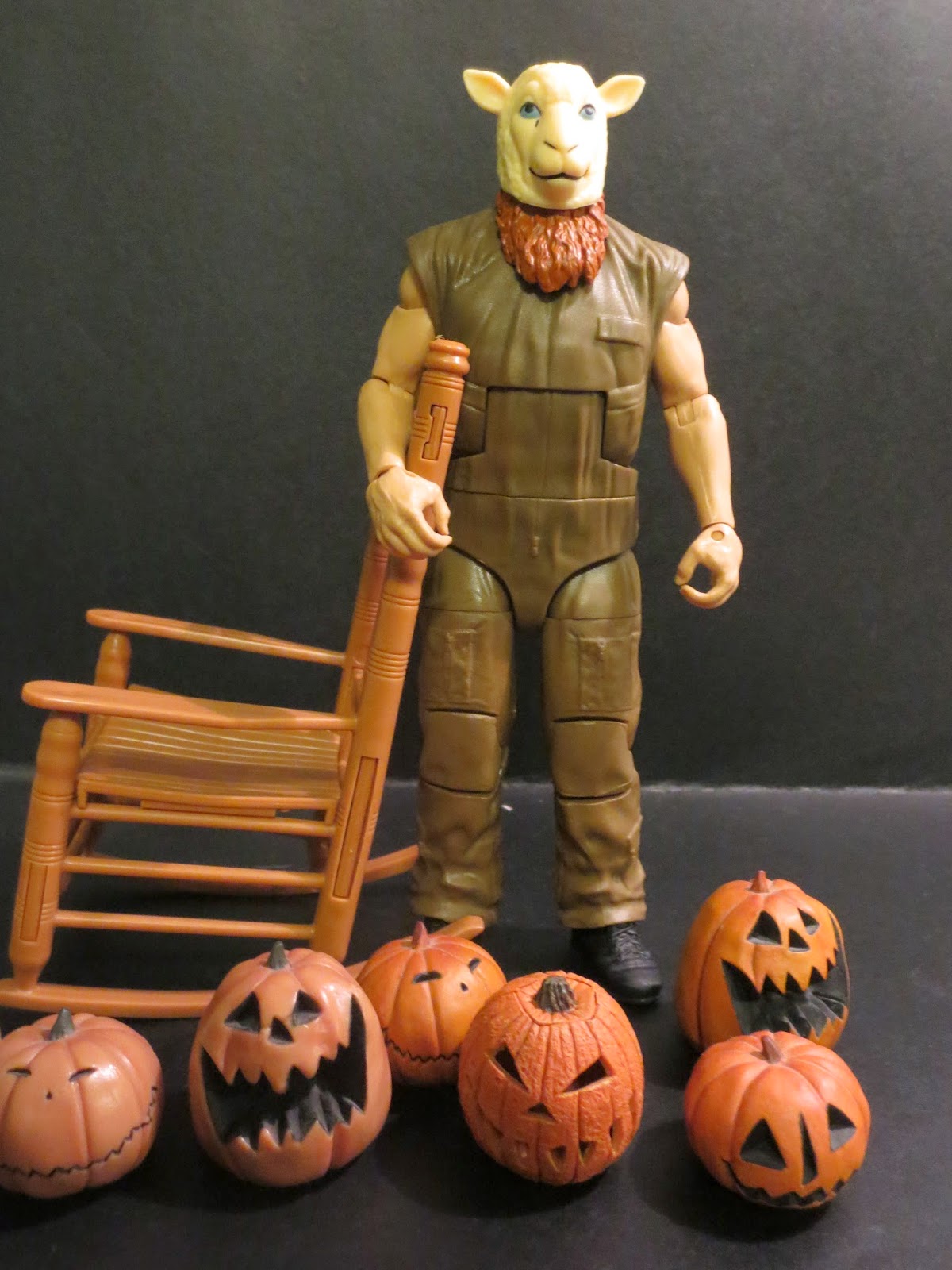 Did you miss Day 1 of 31 Days of Toy Terror? Then check it out here:

Also, make sure to participate in our Best. Halloween. Ever!!! contest here.