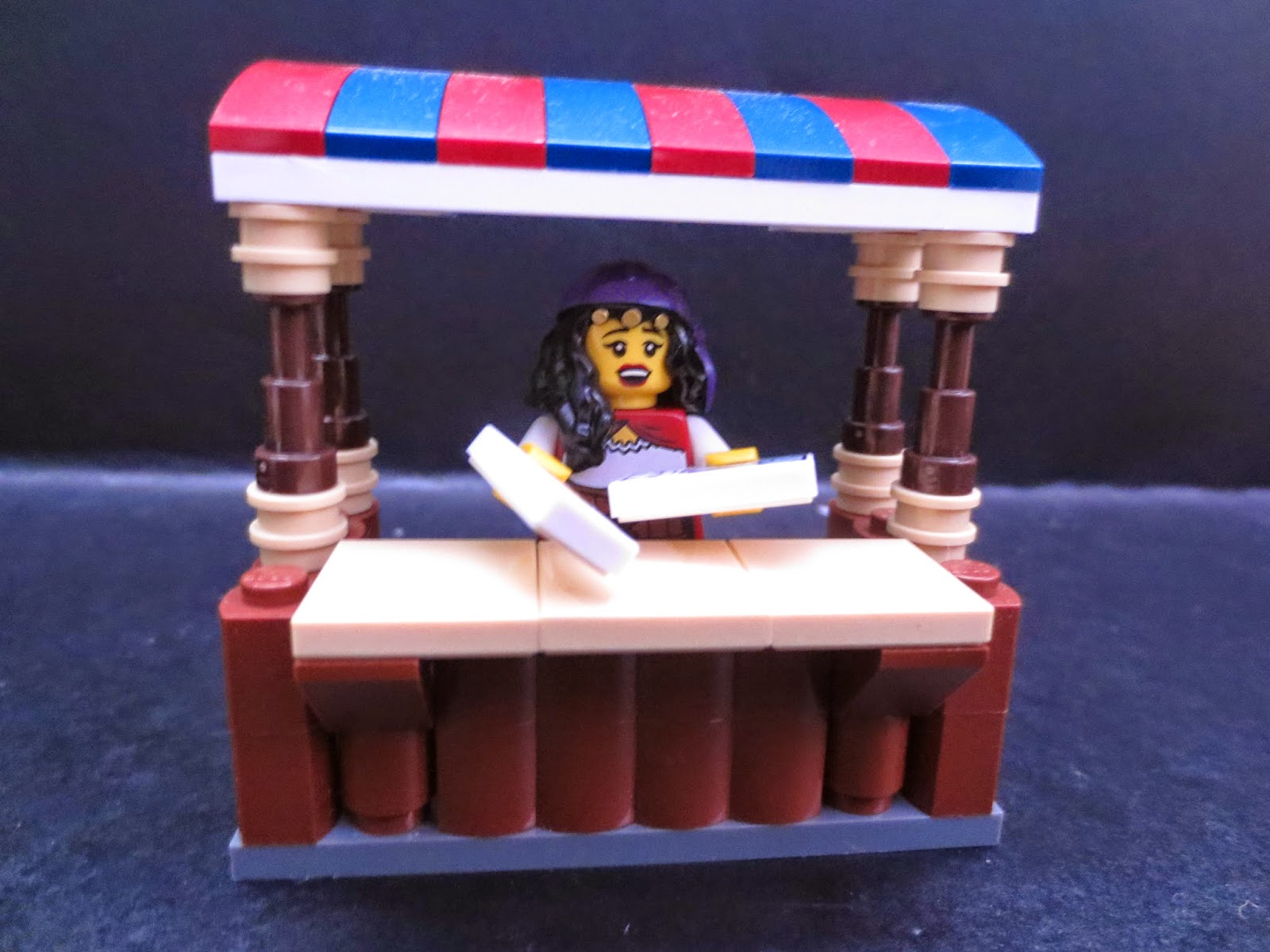 Welcome to a bit of respite in 31 Days of Toy Terror! So far you've faced a killer tree, a backwoods cultist, a cryptid legend, and a hockey mask wearing maniac. Well, you're out of the woods for now, but what will your ultimate fate be? It's time to head on over to the old carnival just outside of town. As you listen to the eerily cheerful sounds of the calliope playing amidst the October wind, you stroll down to the fortune teller's tent....

I love 31 Days of Toy Terror because it gives me a chance to go back and review a mixture of older and newer figures, sometimes reviewing stuff from lines I don't review very often. Today I'm looking at the Fortune Teller from the 9th series of Lego Minifigures. While I've disassembled much of my Lego haunted world over the past year to make room for my Castle Grayskull and massive MOTUC collecton, I've kept a number of the minifigures out. One of these was the Fortune Teller. The character actually has a bio on Lego's own site:

“You will lead a long and uneventful life. Or maybe you’ll be kidnapped by aliens!”
The mystical Fortune Teller has a unique gift for prophecy…sometimes. Half of her predictions come true in every last detail, while the other half turn out to be wildly wrong. Even she doesn’t know which ones are which. It’s led to some very happy customers – and some extremely annoyed ones, too.
It’s gotten to be such a big problem that the Fortune Teller has started second-guessing her own second sight. Whenever she tells someone’s fortune, she also makes something up that’s the exact opposite. It may be confusing, but at least she can be reasonably certain that she’ll always be at least half-right!

To learn more about this mysterious lady, join me after the break... 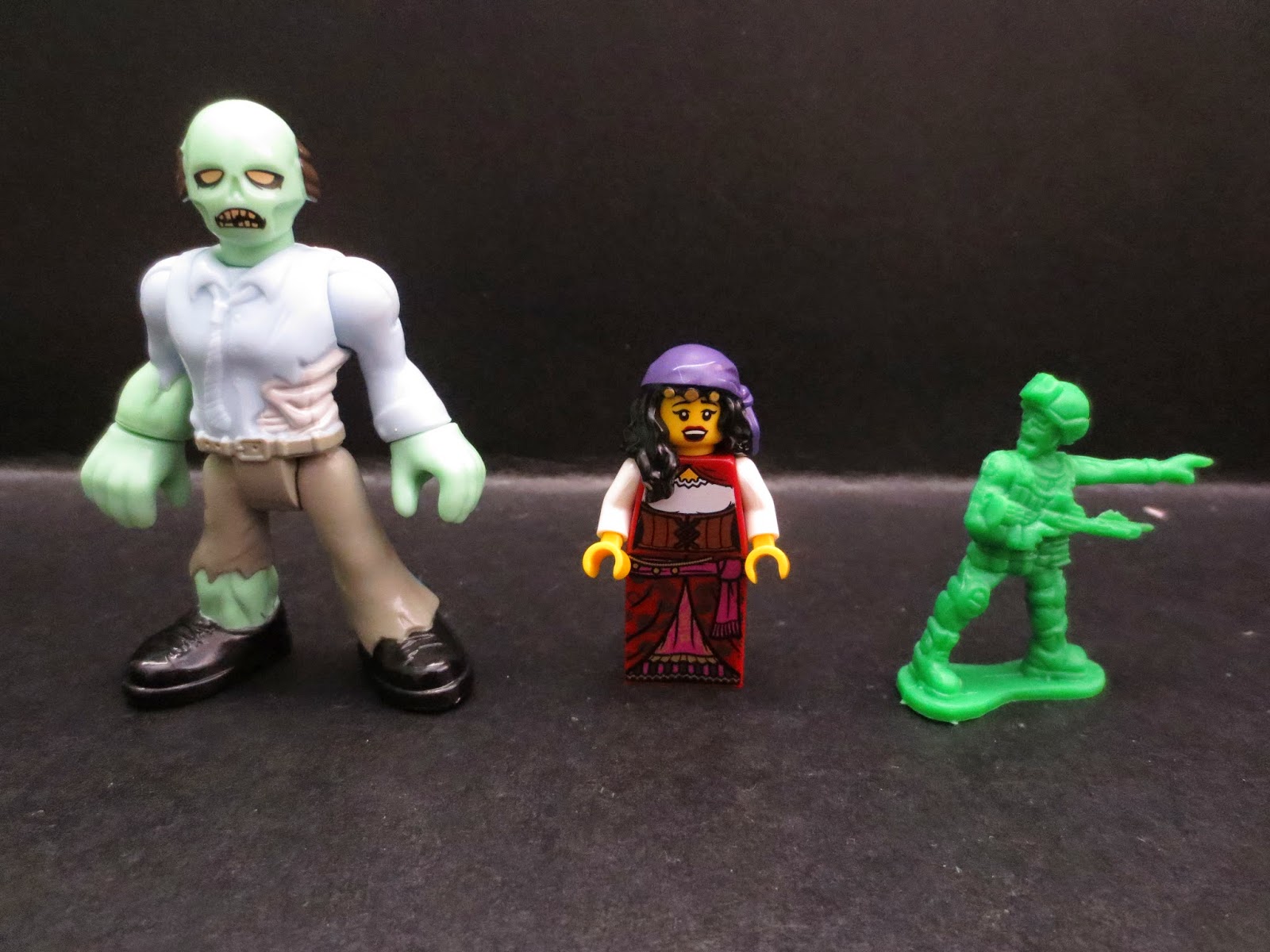 If you've never held a Lego minifigure before, then congratulations for being one of our few non-earthling readers! The Fortune Teller stands 1 3/4 inches tall and only deviates from the standard minifigure in that she doesn't have hinged legs; she instead has the angled slope that is often used to represent dresses or robes. Since Lego products are so versatile, you could use her with any other set where a keen eye into the future might be welcome! 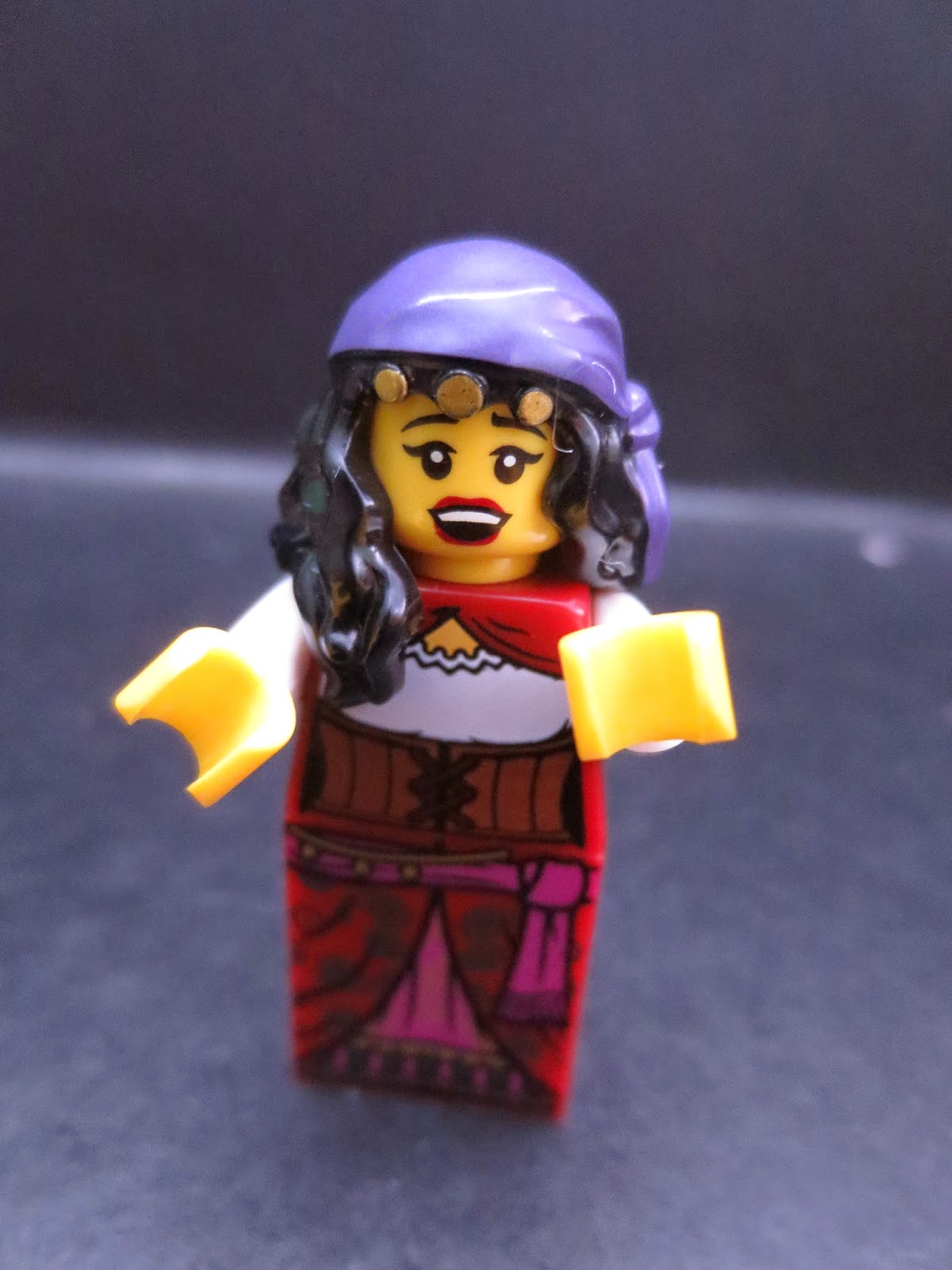 The figure comes disassembled but snaps together in minutes. She features the following points of articulation: swivel shoulders, swivel wrists, and a swivel neck. Lego minifigures don't ever really "do" much; their appeal is more about the fun accessories, facial expressions, and where you display them. She doesn't have the hinged legs like most minis, though, so she can't drive a car or anything. Of course, since this is Lego you could always just swap her skirt piece with another mini's legs. 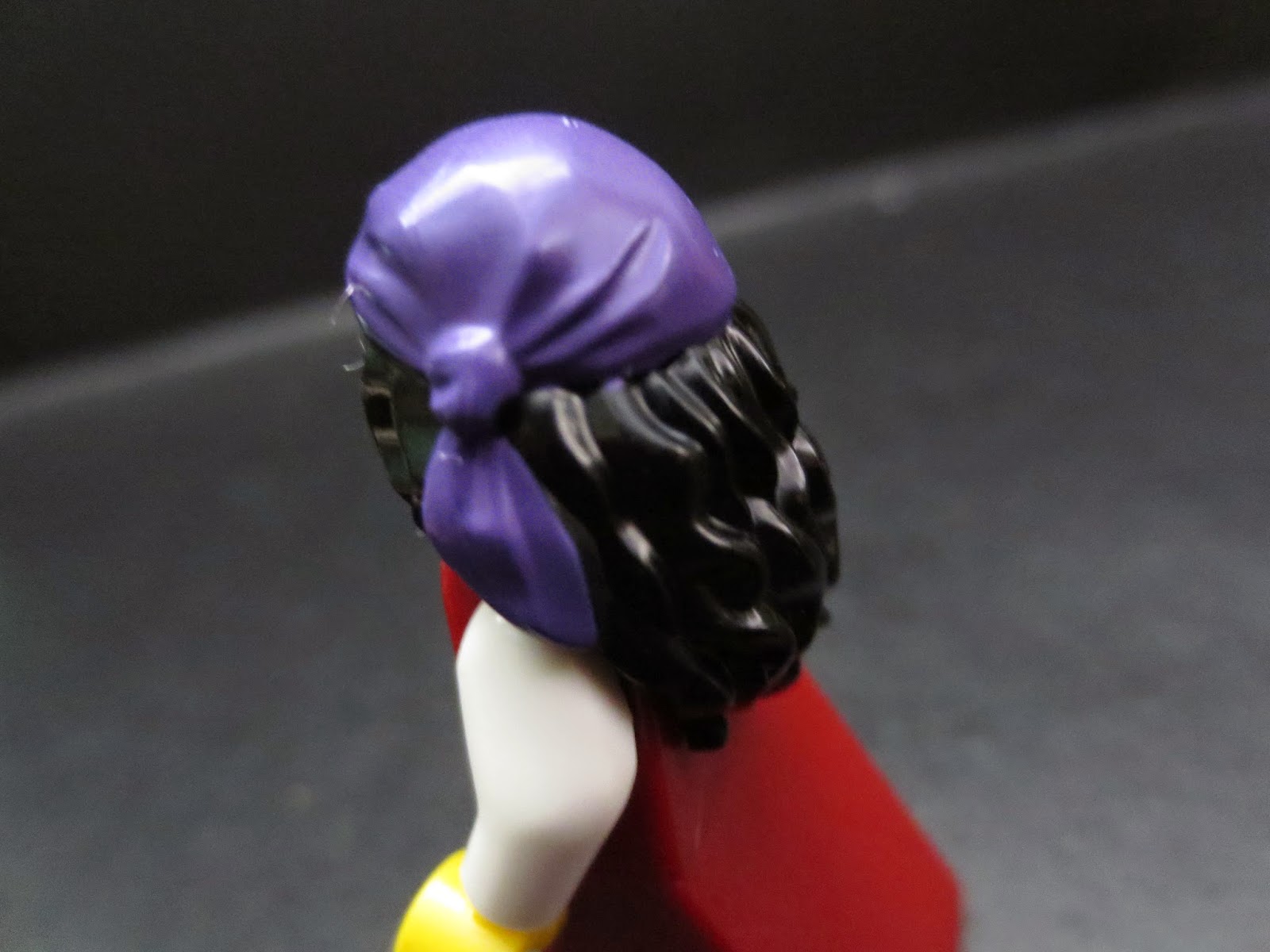 Very few Lego figures feature sculpted elements as most of the detail is captured through paint applications. Her removable hair/ bandanna piece is sculpted, however, and shows off the Fortune Teller's wavy black hair and decorative head garb. This figure actually reminds of someone I know. A few years back I worked in a used book store (it was an amazingly fun job!) and I really wanted to dress up for work on Halloween. The owner decided that since I was dressing up she would dress up, too. When I came into work on Halloween morning I was dressed in my Frodo Baggins costume, but when I was getting out of my car, the owner couldn't see that I was in a costume. She thought I had forgotten and she had showed up dressed like a gypsy. This minifigure kind of looks like her costume! 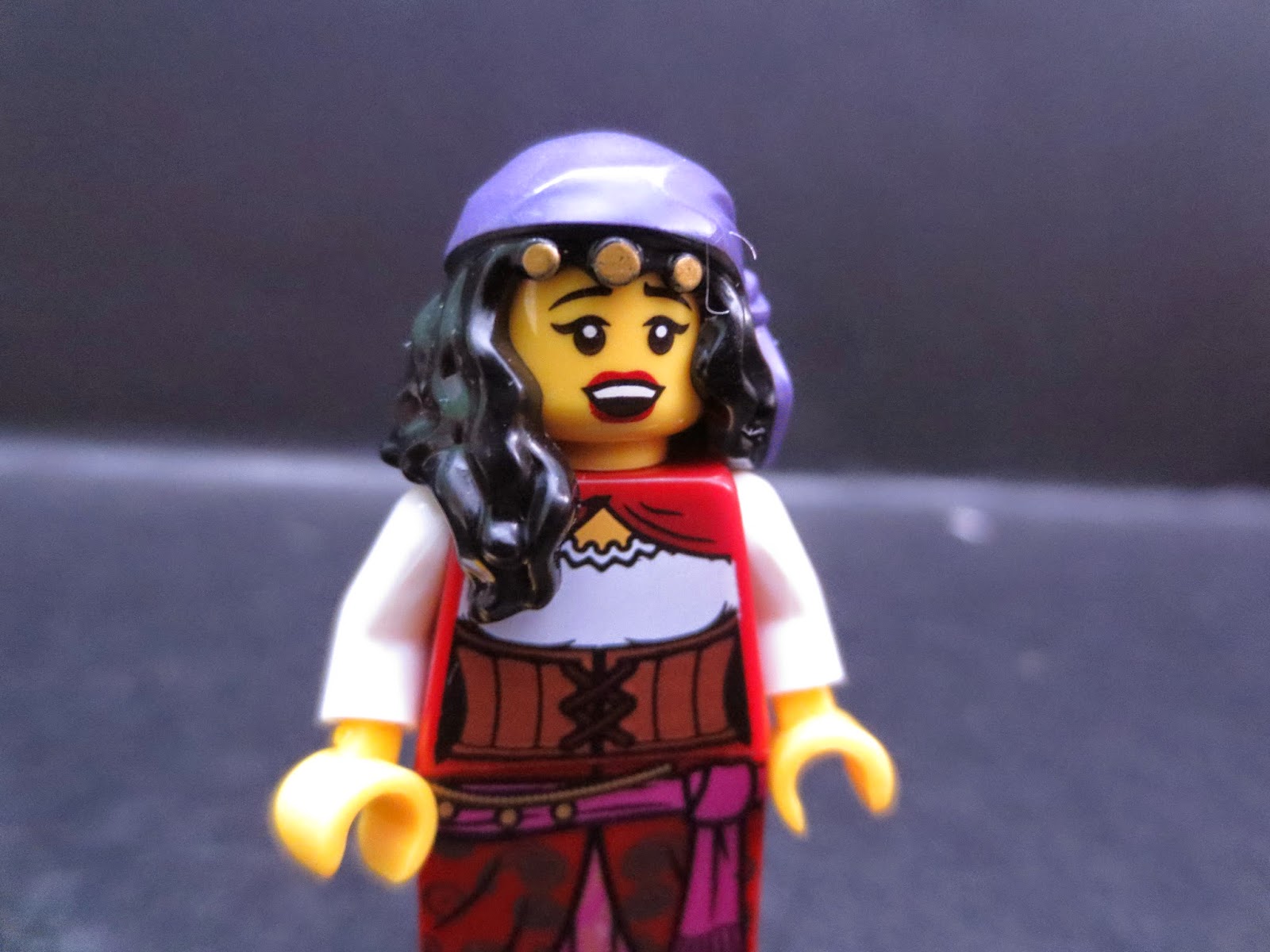 I like the elaborate tampographic stamp on the dress and torso. It has some nice gold details amidst a myriad of greens, pinks, and crimsons. She's also wearing a corset. If you changed out her head, which looks like she's telling someone some good news, you could use her as a fairly standard medieval figure. Or some kind of hippy person who hangs out at farmers markets and always talks about essential oils and sitar music. I guess even Legoland can't escape those people. 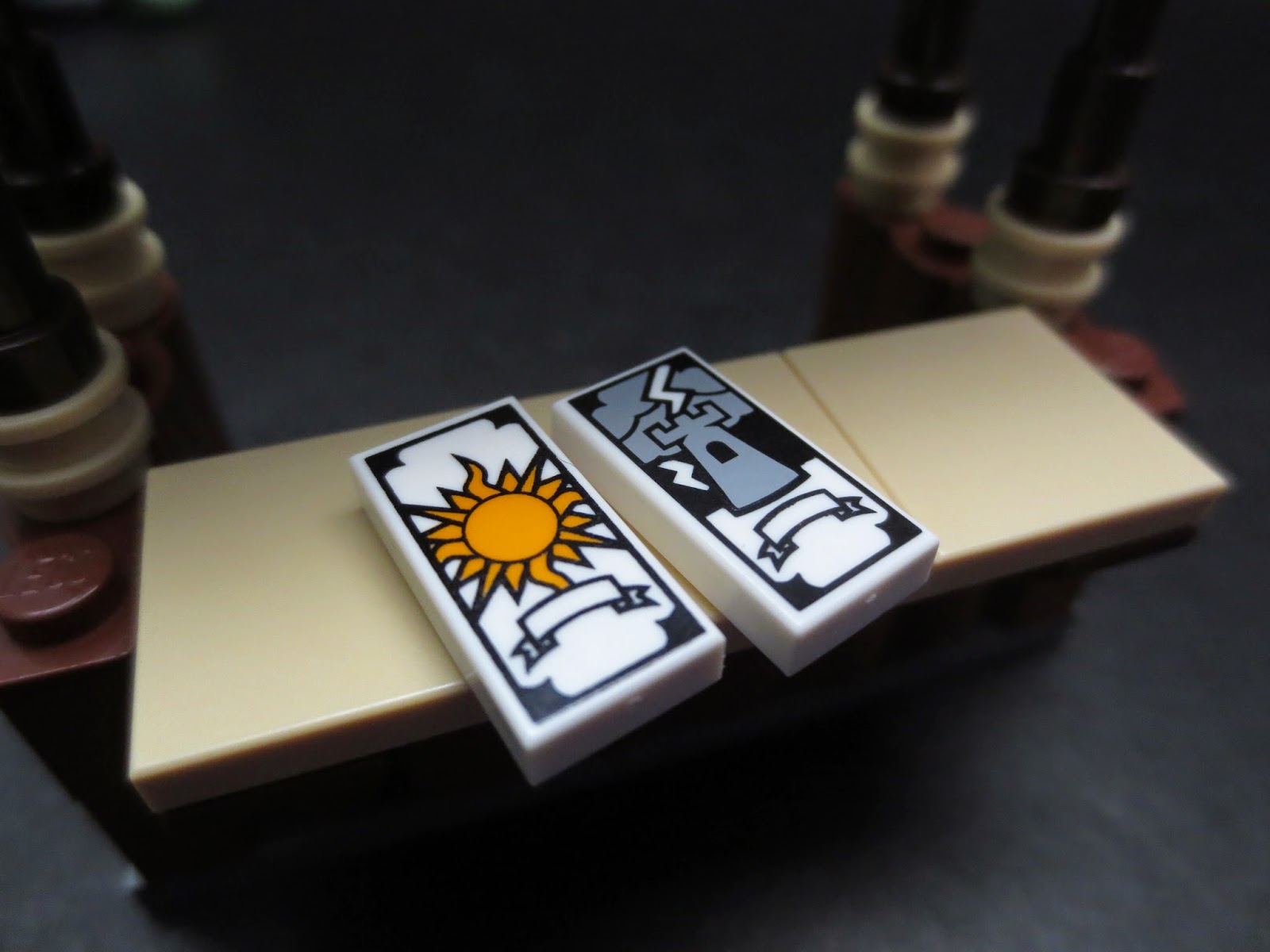 Other than her hair/bandanna piece, the Fortune Teller comes with three accessories. First is the really nice black base that all of the blindbagged minifigures come with. I love these things and any toy that gets a base always gets a pass from me. Seriously, I give extra points for stuff like that. Second and third are two fortune teller cards. I guess these are tarot cards. They're printed on 1 x 2 tiles with one showing a stylized sun and the other a castle with lighting striking it. If my experience reading fortunes tells me anything, one of these cards means that you're going to get a sunburn while the other means someone is going to take your rook in a game of chess. She can hold them in her hands or attach them to any block with studs. 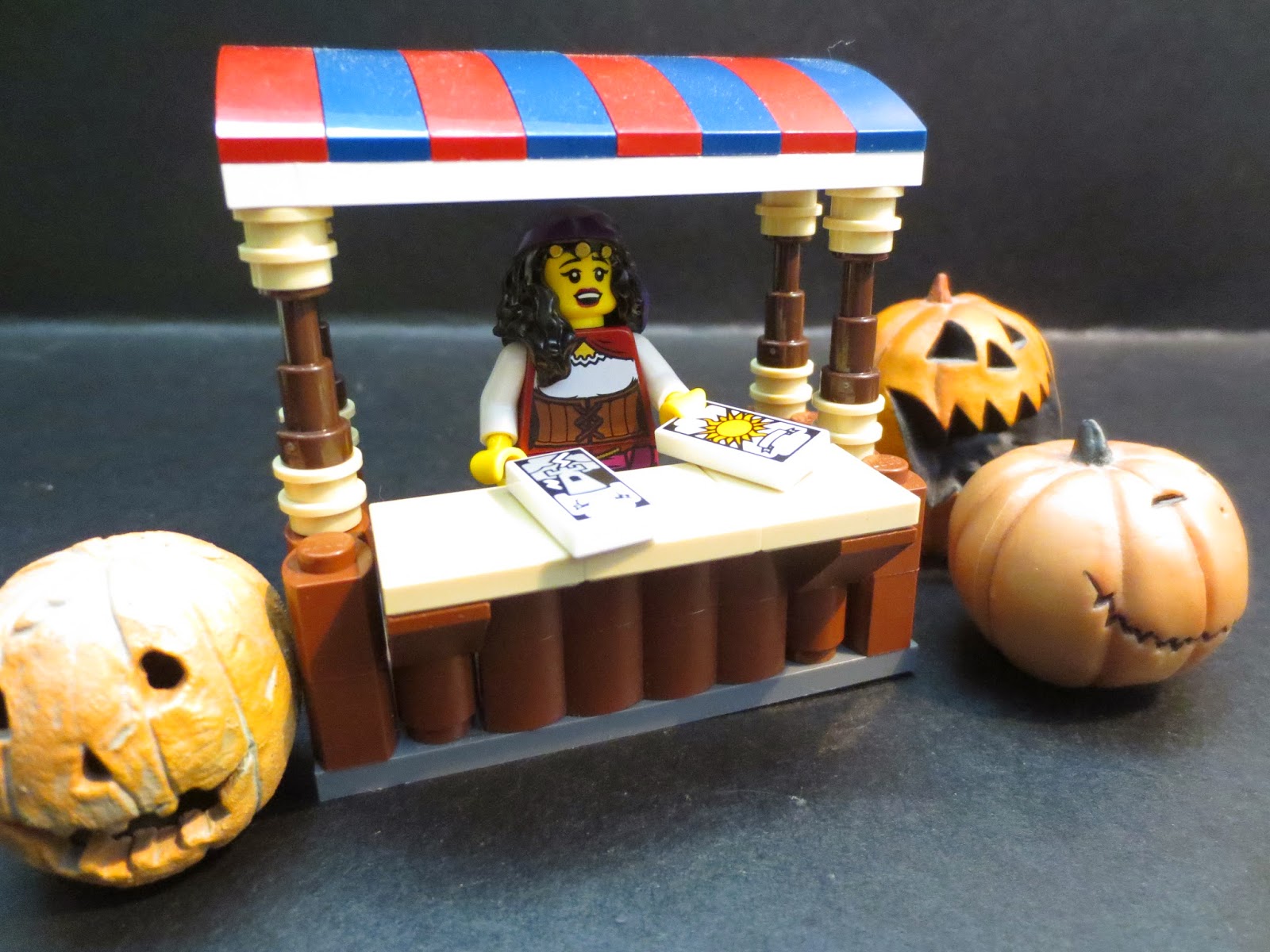 The Fortune Teller is a fun little mini. She isn't one of my favorite Lego minifigures ever, but she's not dull either. She's a little above average. Ultimately, I'm giving her a Good and a 1/2 rating. She's fun and fairly versatile, but not one I would have tracked down if I weren't building a haunted Lego town. So, how about I read your fortune? You are going to bookmark www.thepicreview.com! You're also going to follow us on your blogfeed! And you'll enter our Best. Halloween. Ever!!! contest.  Oooooohhhhh!!!!! Spooky are my powers of foretelling the future!
Check out the previous days of 31 Days of Toy Terror if you've missed them:
Day 1: Tree Warrior from True Legends
Day 2: Erick Rowan from WWE Elite Collection
Day 3: Momo, the Missouri Monster from Legendary Monsters
Day 4: Jason Voorhees from ReAction Horror Series
Also, make sure to participate in our Best. Halloween. Ever!!! contest here.
Of course, you can check out our other Lego reviews as well:
Lego: DC Superheroes
Arkham Asylum Breakout
Batman: Man-Bat Attack
Batman: The Riddler Chase

Lego: The Lord of the Rings
Pirate Ship Ambush