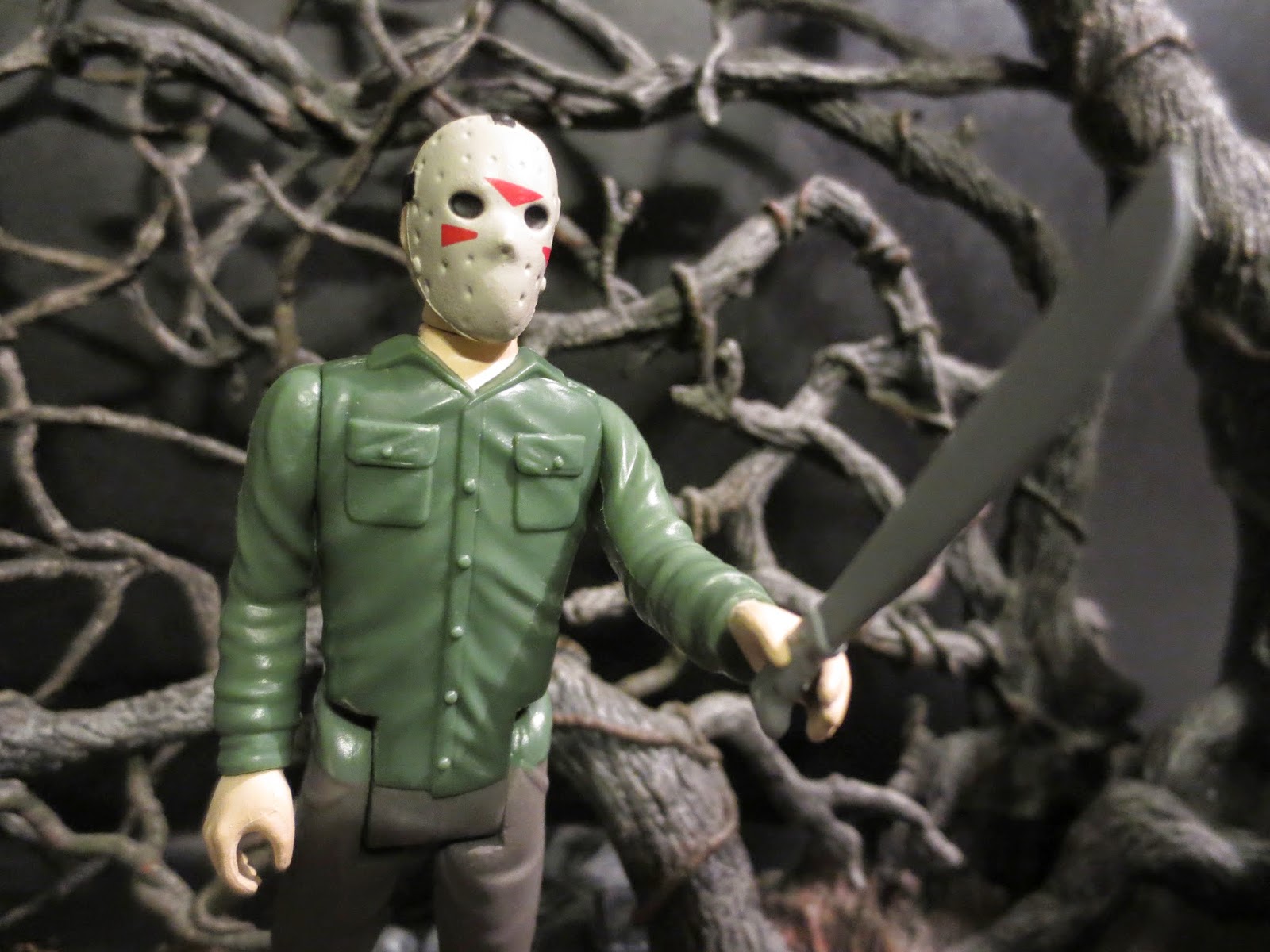 It's day 4 of 31 Days of Toy Terror and so far we've dealt with a killer tree, a deranged backwoods cultist, and a legendary cryptid. Now, get ready for an icon that will turn your little camping trip in the woods into nightmare.
While Friday the 13th might not be the best series of slasher films (it's not), didn't invent the genre (it didn't), and Jason Voorhees might not be the most visually interesting horror character around (he isn't), it is really tough to say that Jason isn't the most iconic slasher out there. Don't get me wrong: I find most other slashers to be more interesting characters than Jason but, when you say slasher, nearly everyone automatically things of a maniac in a hockey mask. Sure there was a hockey mask wielding slasher called "The Bleeder" in the film Alone in the Dark, which also released in 1982 just a few months after Jason donned his hockey mask for the first time in Friday the 13th: Part 3 (Alone in the Dark, starring Jack Palance, Martin Landau, Dwight Schultz, and Donald Pleasance is a way better movie than any of the 13ths, by the way), but Jason made that look his own. Whenever most anyone thinks of a movie slasher, it's Jason they're thinking about. If you were of trick 'r treating age at anytime during the late 80s or early 90s, odds are that you owned a plastic hockey mask. Today I'm looking at the Jason Voorhees action figure from Funko's new ReAction Horror Series toyline. Ready for your daily dose of machete wielding maniac? Then join me after the break... 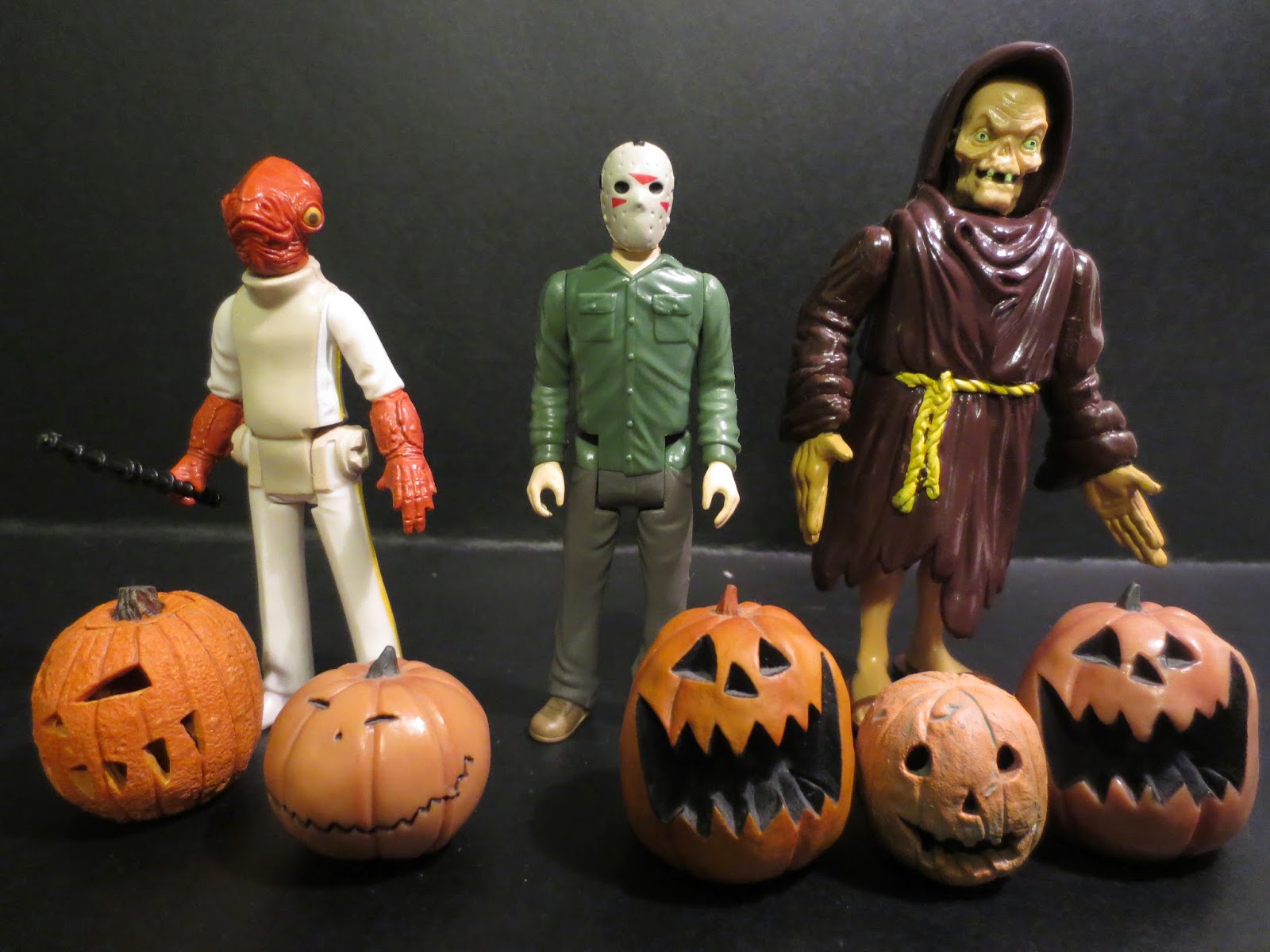 While he's typically portrayed as a hulking brute in film, this Jason only stands around 4 inches tall. He's a bit taller than some of the other ReAction figures, but that makes sense for Jason. While Jason's retro styled packaging identifies him as being from Friday the 13th, the hockey mask didn't appear until the third installment of the series. Jason's simple outfit and paint job really captures the spirit of the action figures of the late 70s and early 80s to which the ReAction line pays homage. 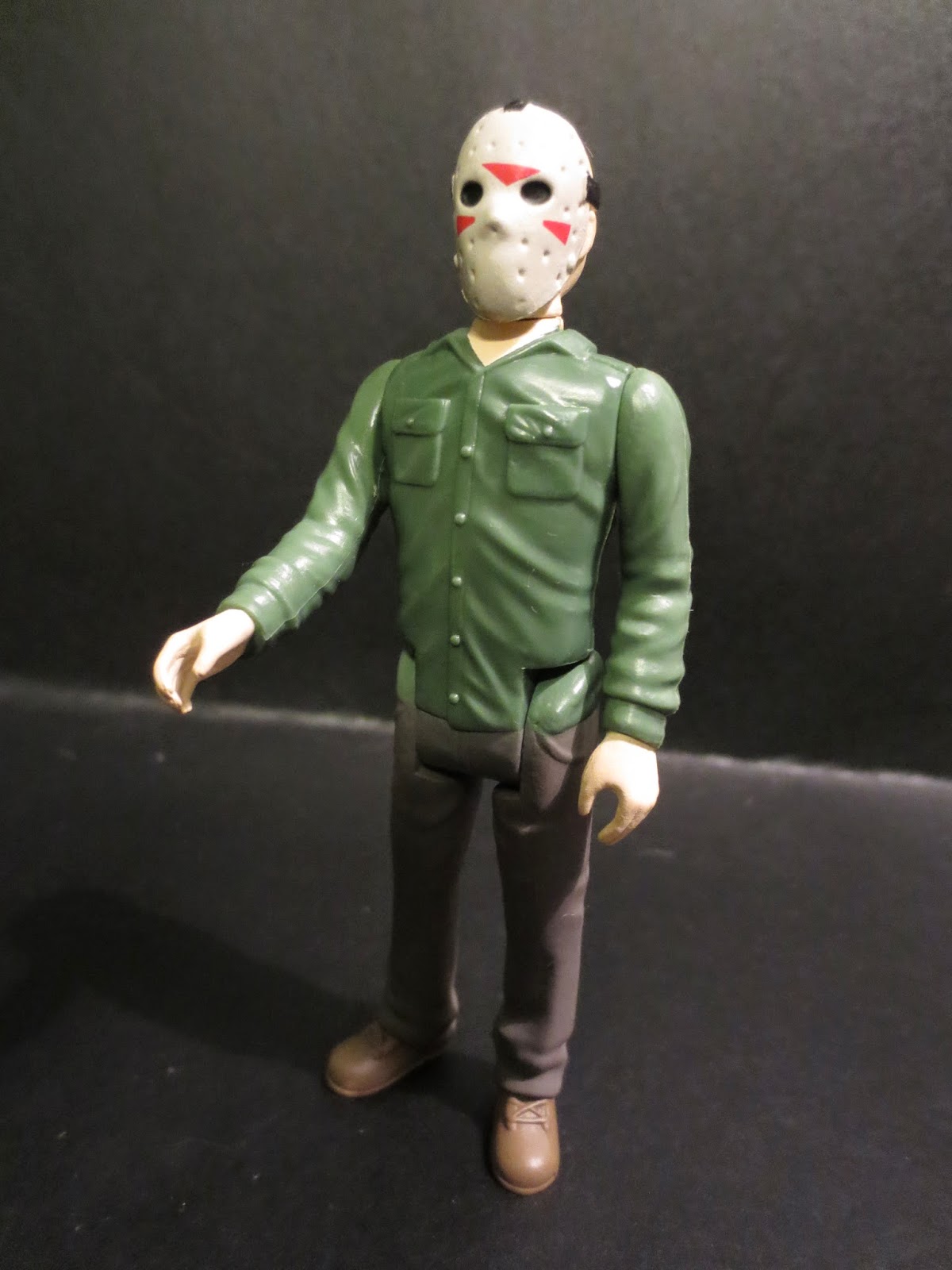 Would you be surprised if I told you Jason only has five points of articulation? Of course not! He features...you guessed it! Swivel hips, swivel shoulders, and a swivel neck. The figure feels solid enough although my Jason's left leg is a bit loose. Sometimes he lunges forward and falls down. Whoops. 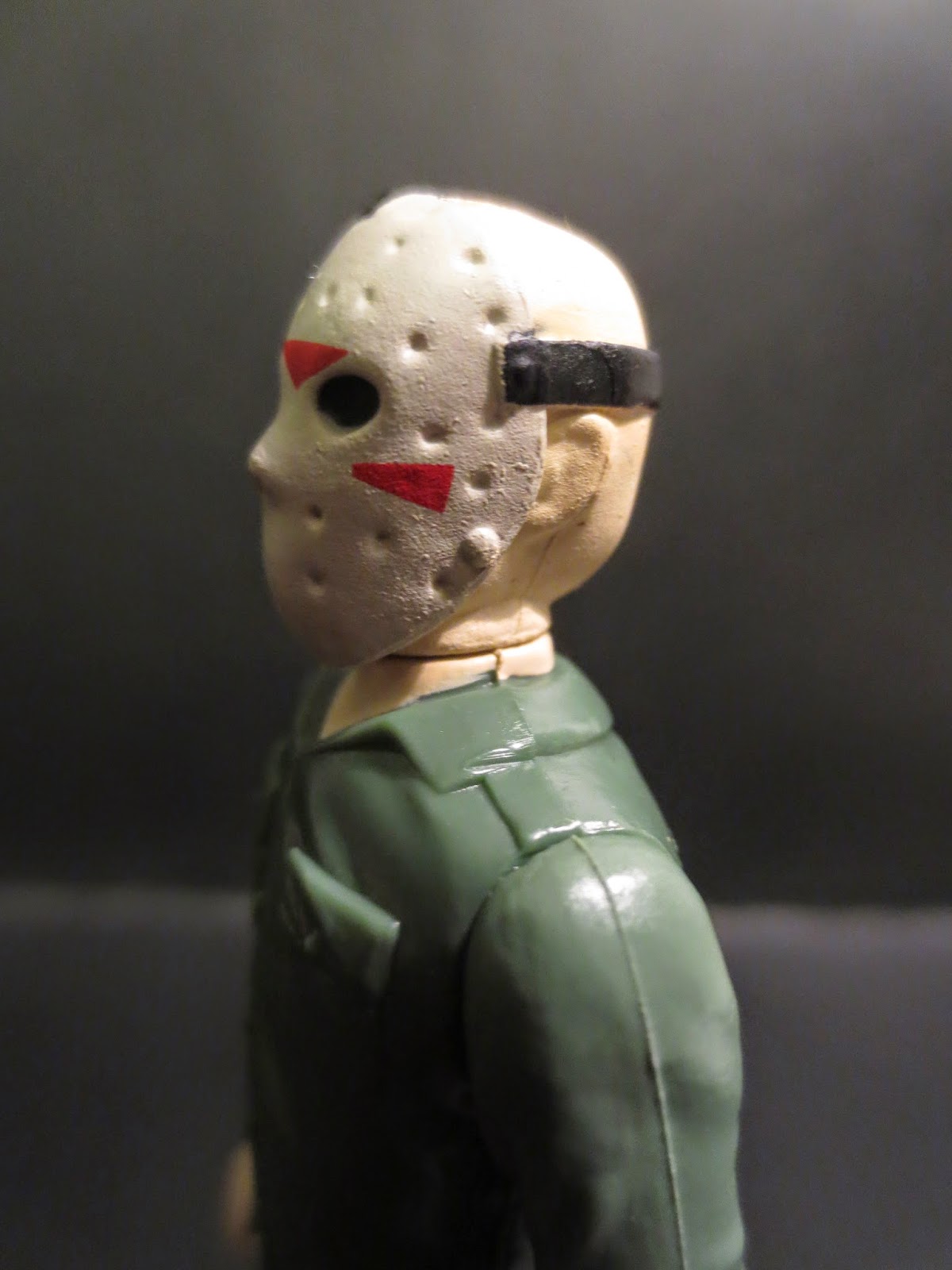 Looking at this figure, I really think it is based off of Friday the 13th: The Final Chapter. Jason has his hockey mask on and is decked out in a green shirt with brownish gray trousers. The back of his head is a little bulbous, but mostly just flat, so he definitely not zombie-Jason from Friday the 13th Part VI: Jason Lives. Jason's outfit is simple with just the little details you would expect (wrinkles, buttons, and pockets) but his mask has a little more detail. You can't see his eyes, but the nose and little divots on the hockey mask are very visible. I think Funko did an excellent job of nailing the vintage aesthetic with this guy. 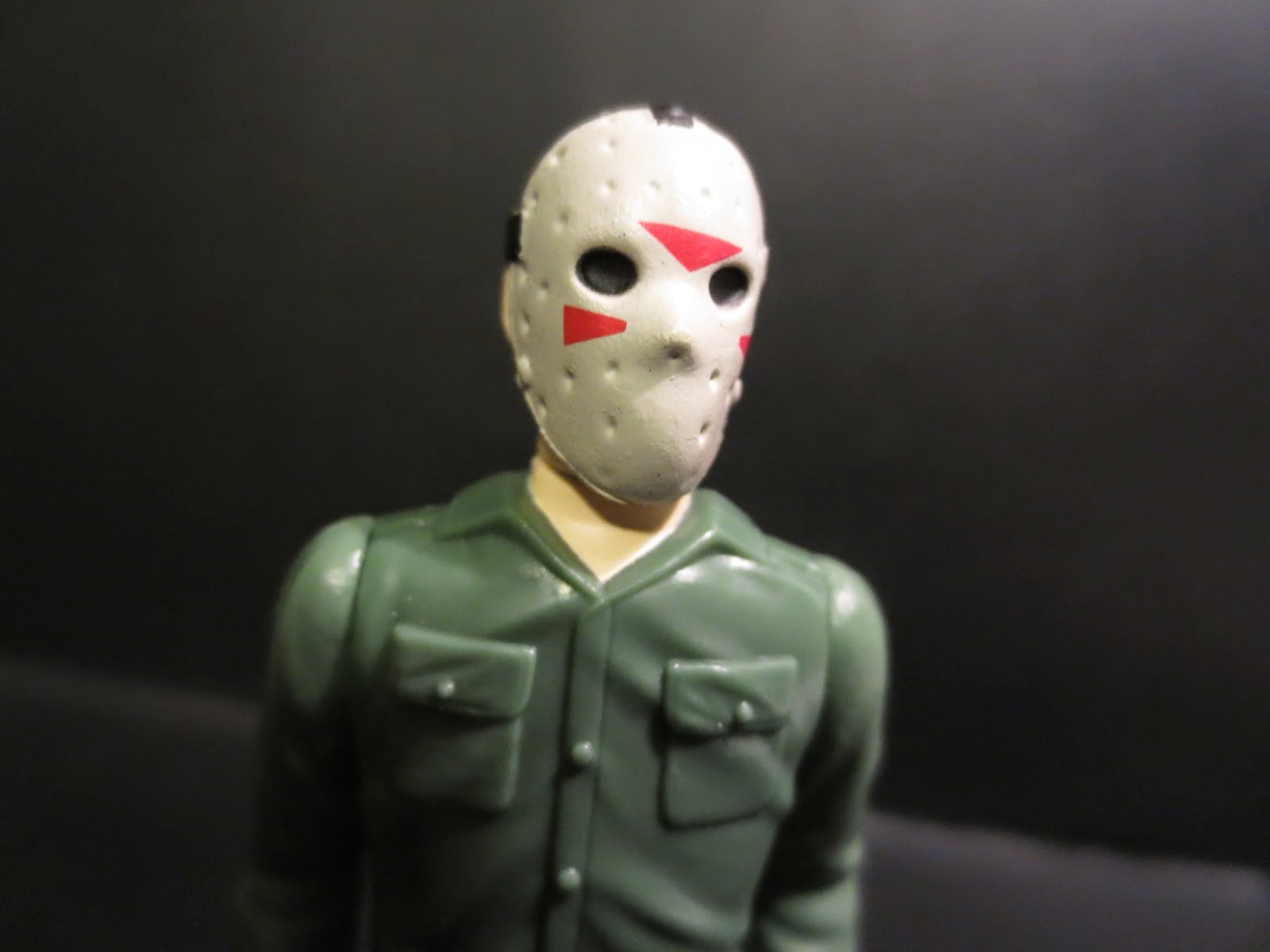 The paint work is simple and clean with no slop that I can see. I love the all black eyes (I think it works great in this scale) although I do think the red triangles on Jason's hockey mask look a little off center. I looked at some pictures to see if they're supposed to look like this, but after research I think the triangles are simply off a bit. It's not a deal breaker, but if you look closely you'll notice it. 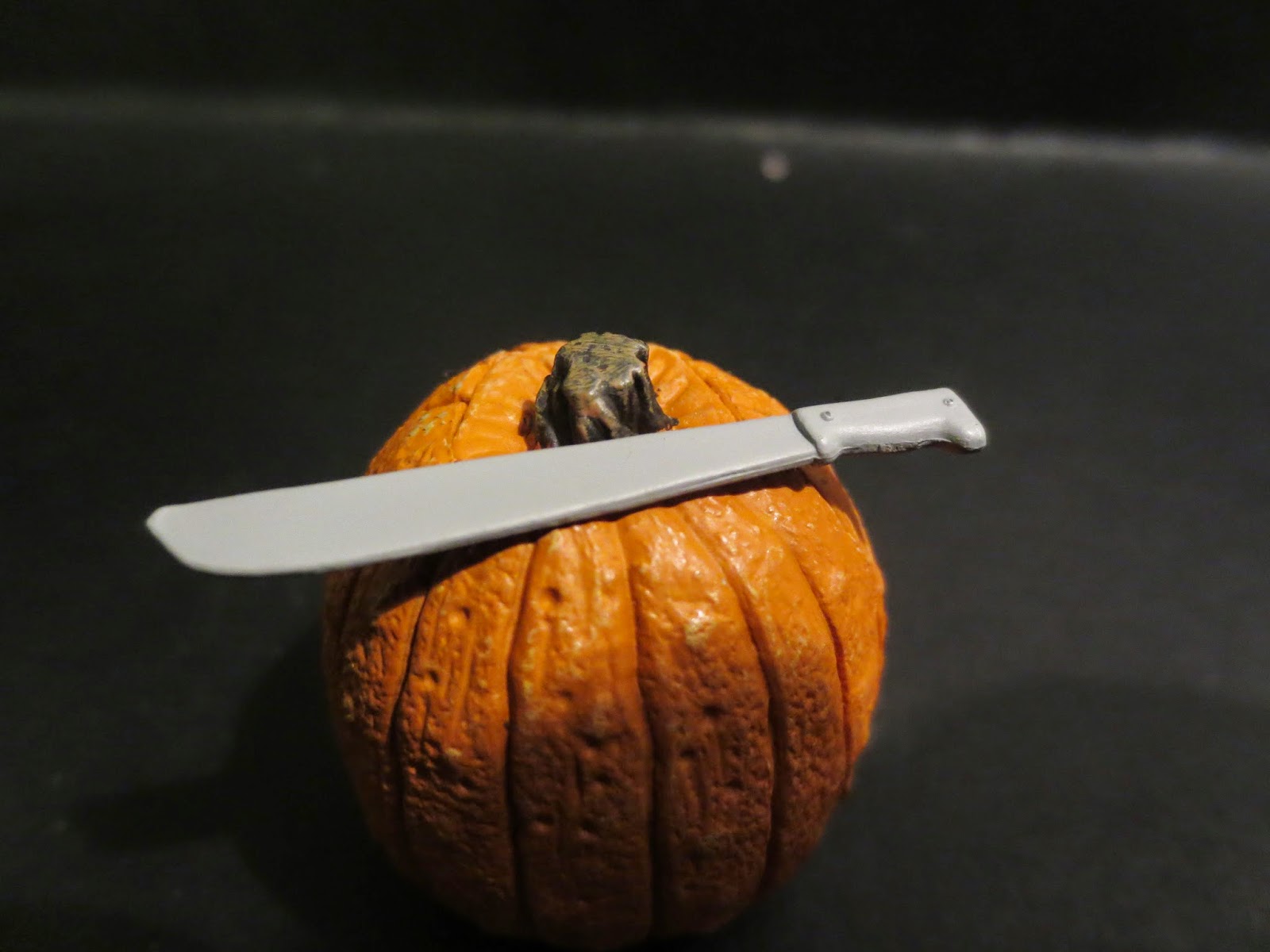 While the man wields an arsenal of weapons that cut, stab, or bludgeon, this Jason figure only comes with one accessory: A machete. It's a simple gray machete with little detail (you can see where the screws holding the handle in place would be), but it fits the style perfectly. Jason can wield it in either hand to aid him in menacing teenagers. Go Jason, go! Oh, and if you want some extra accessories for him like an ax, a sledgehammer, or a chainsaw, head on over to Marauders, Inc. and pick up some more cool accessories to deck this guy out! 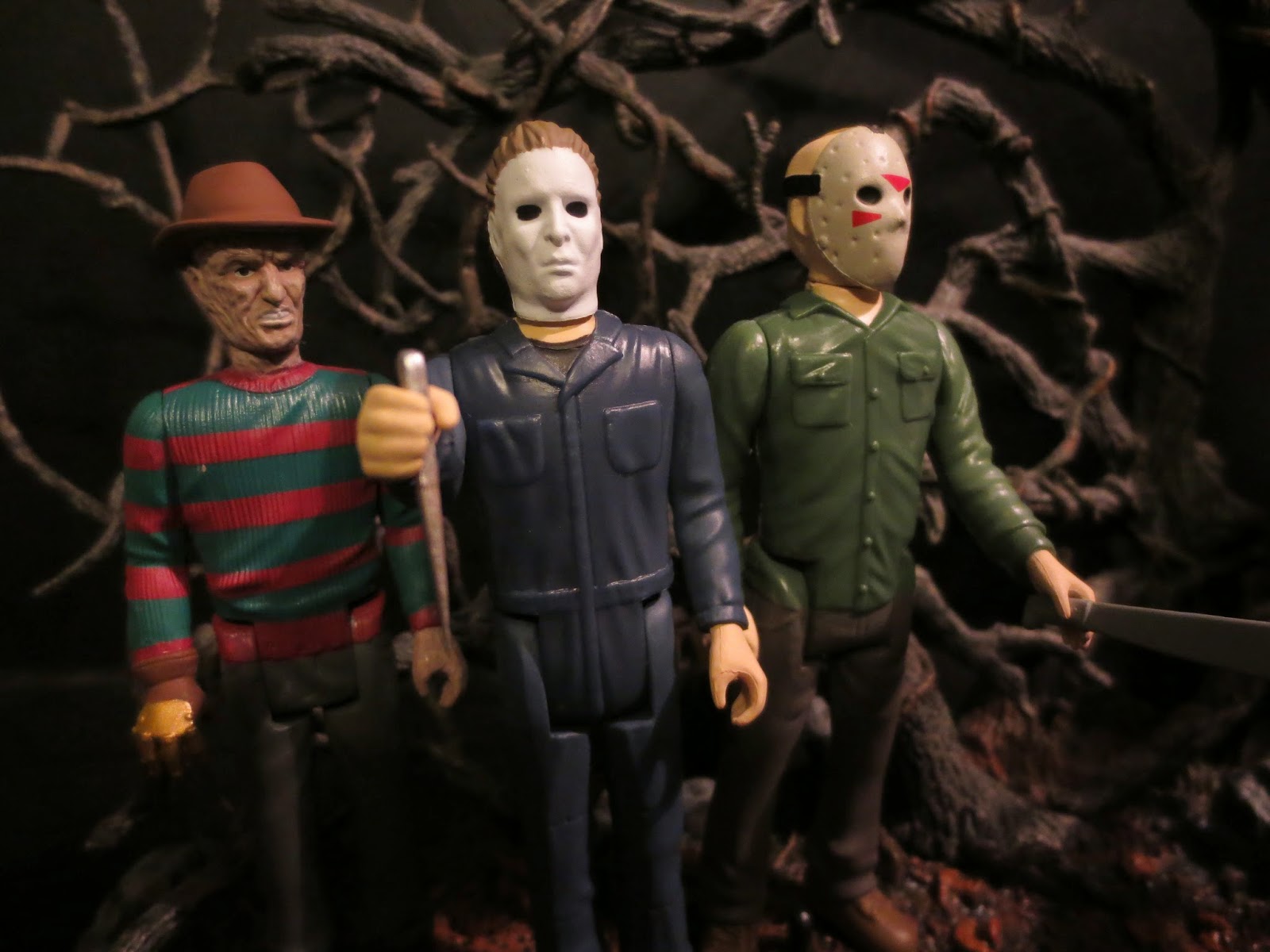 While Jason isn't my favorite movie slasher, I definitely like this figure. He looks great and captures the simple brilliance of the Jason design once he began wearing that hockey mask. McFarlane, NECA, Mezco, and other companies have made plenty of Jason figures with better detail, more accessories, and greater film accuracy, so it is interesting to see Funko try something completely different. I'm giving him a Good and a 1/2. While this Jason is available now, there is an NES colors version as a Toy Tokyo exclusive at NYCC, too! Do you want two Jasons running around? Of course you do!