31 Days of Toy Terror: The Phantom of the Opera from Universal Monsters ReAaction by Funko 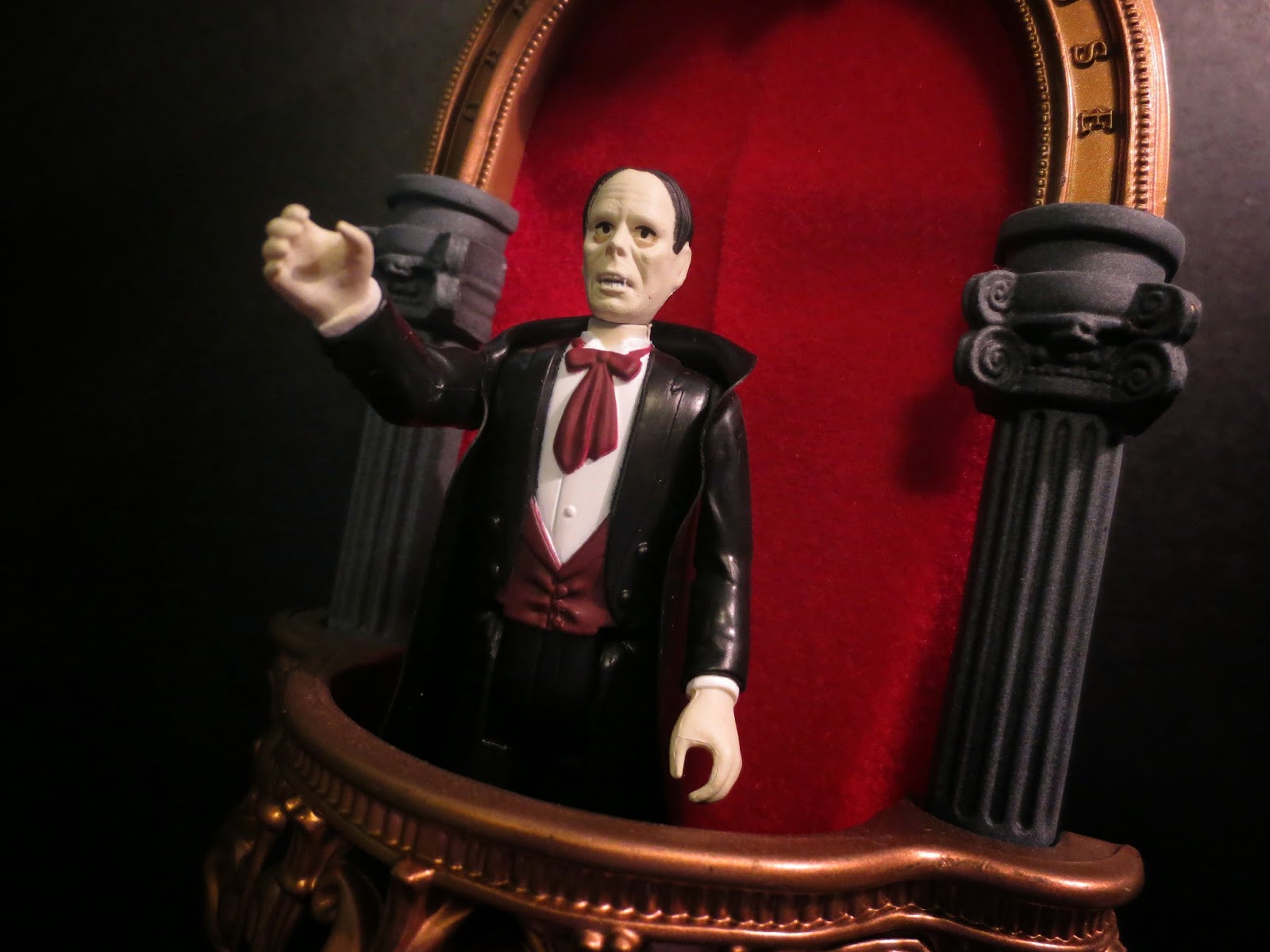 So far, 31 Days of Toy Terror has drug you all through the woods to face killer trees, crazed cultists, legendary cryptids, and masked maniacs. Then it took you to a rundown old carnival to meet with a mysterious medium. Now, your destiny lies in a nearby city at a rundown opera house. What could be lurking so close to the bright city lights? It's just an old theater, right?

I'm head over heels for Funko's new ReAction brand and I'm going particularly gaga for their horror lines. The Universal Monsters just work so well in this format as they really are reminiscent of the 1981 Remco Mini Monsters. I've always loved the 1925 silent film Phantom of the Opera, particularly due to Lon Chaney's exceptional performance and grotesque appearance. Fortunately, it is Chaney's portrayal of the Phantom that was chosen by Funko as part of the Universal Monsters ReAction series (Universal also remade the movie in 1943 with Claude Rains portraying the Phantom). Ready for a look at one of the most famous (and tragic) movie monsters around? Then join me after the break... 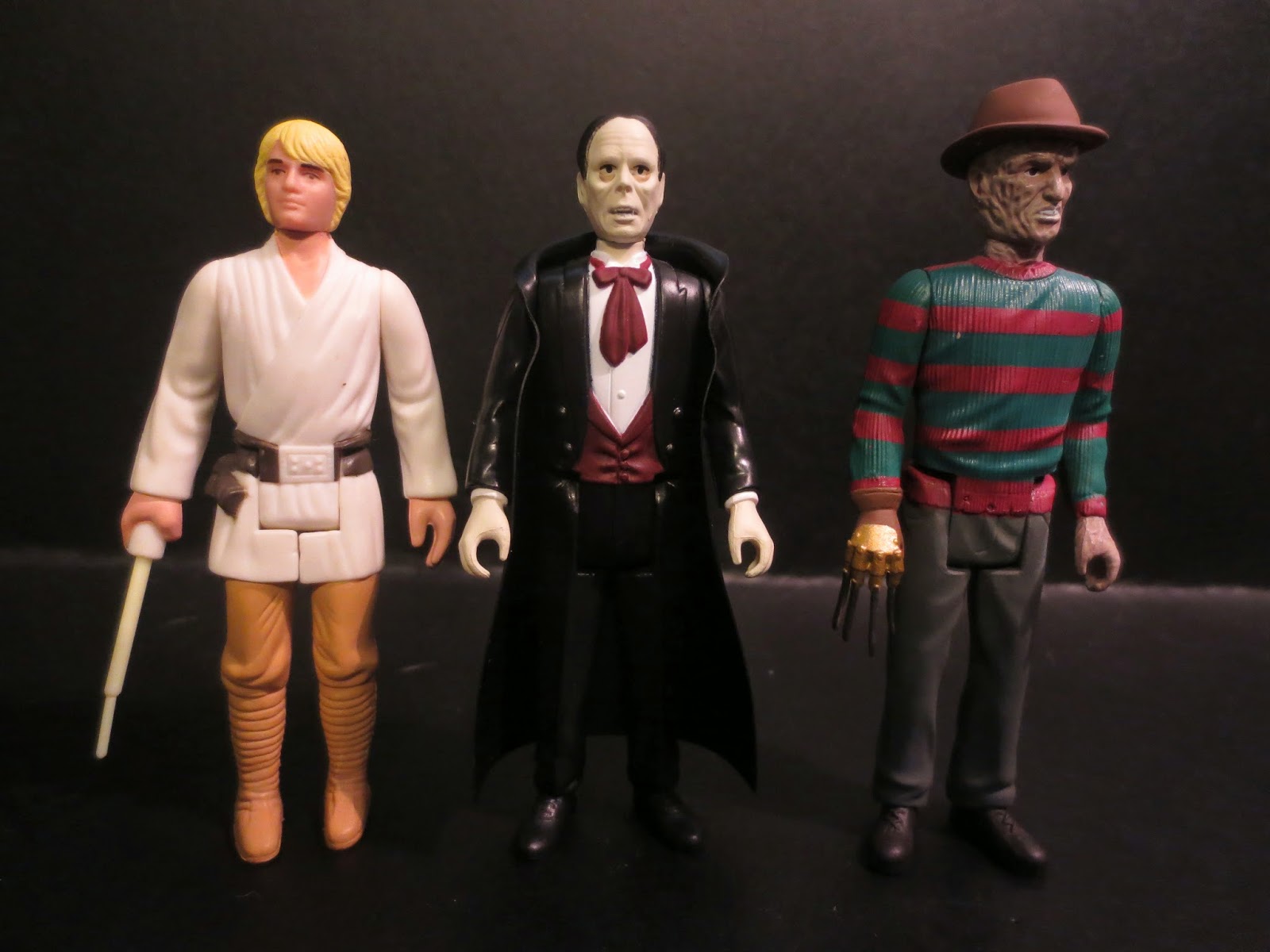 As is standard for the ReAction figures, the Phantom is rather thin, standing in a neutral pose, and only 3 3/4 inches tall. He comes on a personalized vintage styled blister card and fits right in with classic 1/18th scale lines like Kenner's Star Wars as well as with other modern "vintage inspired" lines. 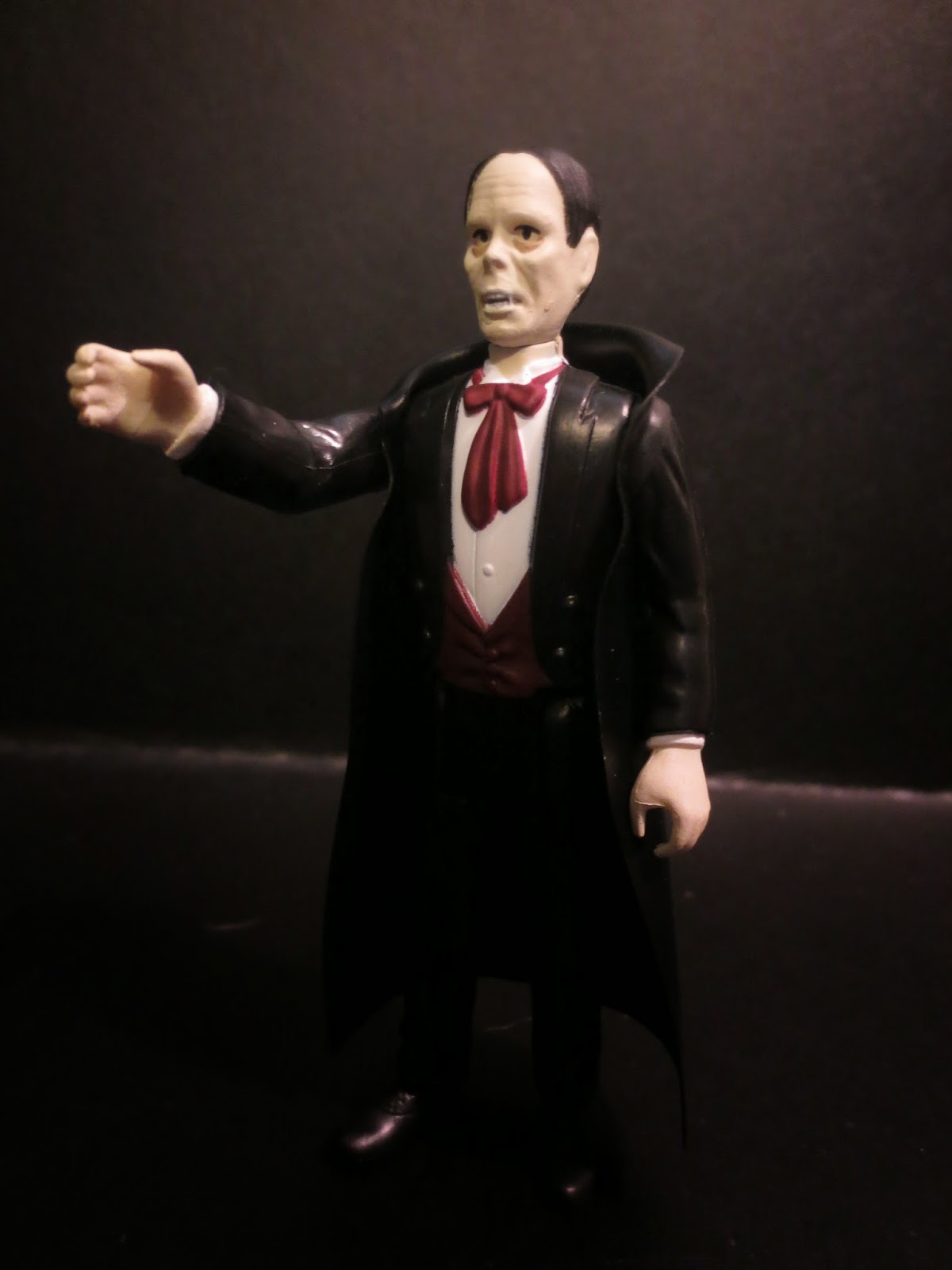 Of course there's little surprise as to the articulation on this guy: Swivel hips, swivel shoulders, and a swivel neck.  I haven't mentioned it before in the reviews of these guys (that I can remember) but the Universal Monsters don't have holes in their feet. This is definitely a bit of an oversight (according to a Funko message board, it was apparently entirely accidental) as I think fans would like to be able to use some of the vast number of available action figure stands available to keep these guys standing straight and tall. He does stand well on his own, though, and the plastic quality feels excellent. He's very firm and solid. 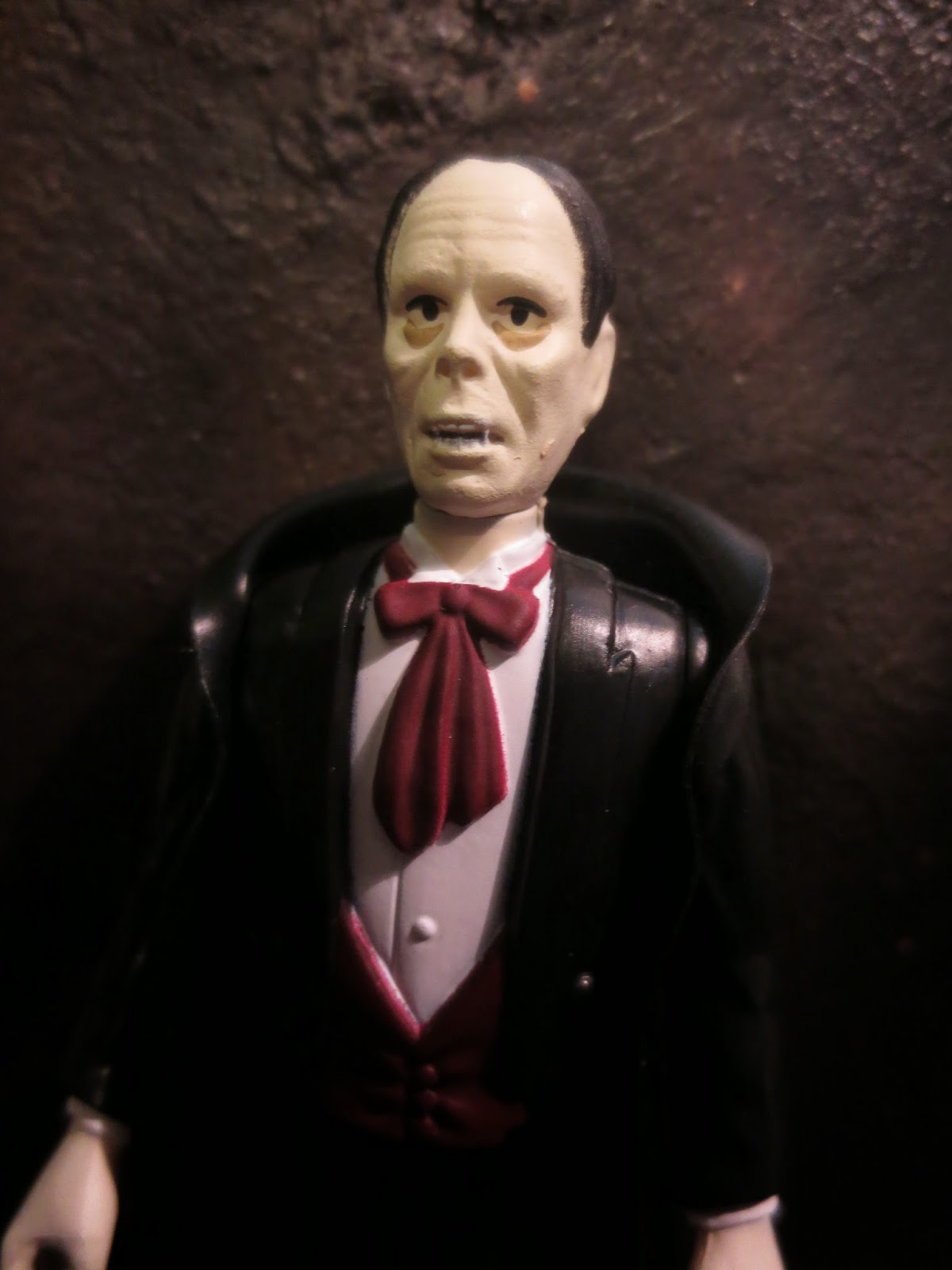 The ReAction action figures, while drawing inspiration from Kenner's Star Wars line that ran from 1978 until 1985, feature quite a bit of variation in their level of detail. Of course, the Star Wars line featured variation as well. Compare a figure from 1978 like Princess Leia or Obi-Wan Kenobi with a figure from 1985 like Amanaman or Barada. The difference is pretty noticeable, so it makes sense that some of the ReAction figures, like Snake Plissken and the Back to the Future line, look like the earlier figures while figures like the Phantom here look like those later figures. His three piece suit is rather detailed with a droopy bow tie and a pretty good face sculpt. It isn't a perfect face sculpt (not enough pug nose) but I think it fits the spirit of the vintage aesthetic well.I'm glad Funko chose the Phantom's exposed face over a masked appearance, although  would definitely buy a masked variant at some point. 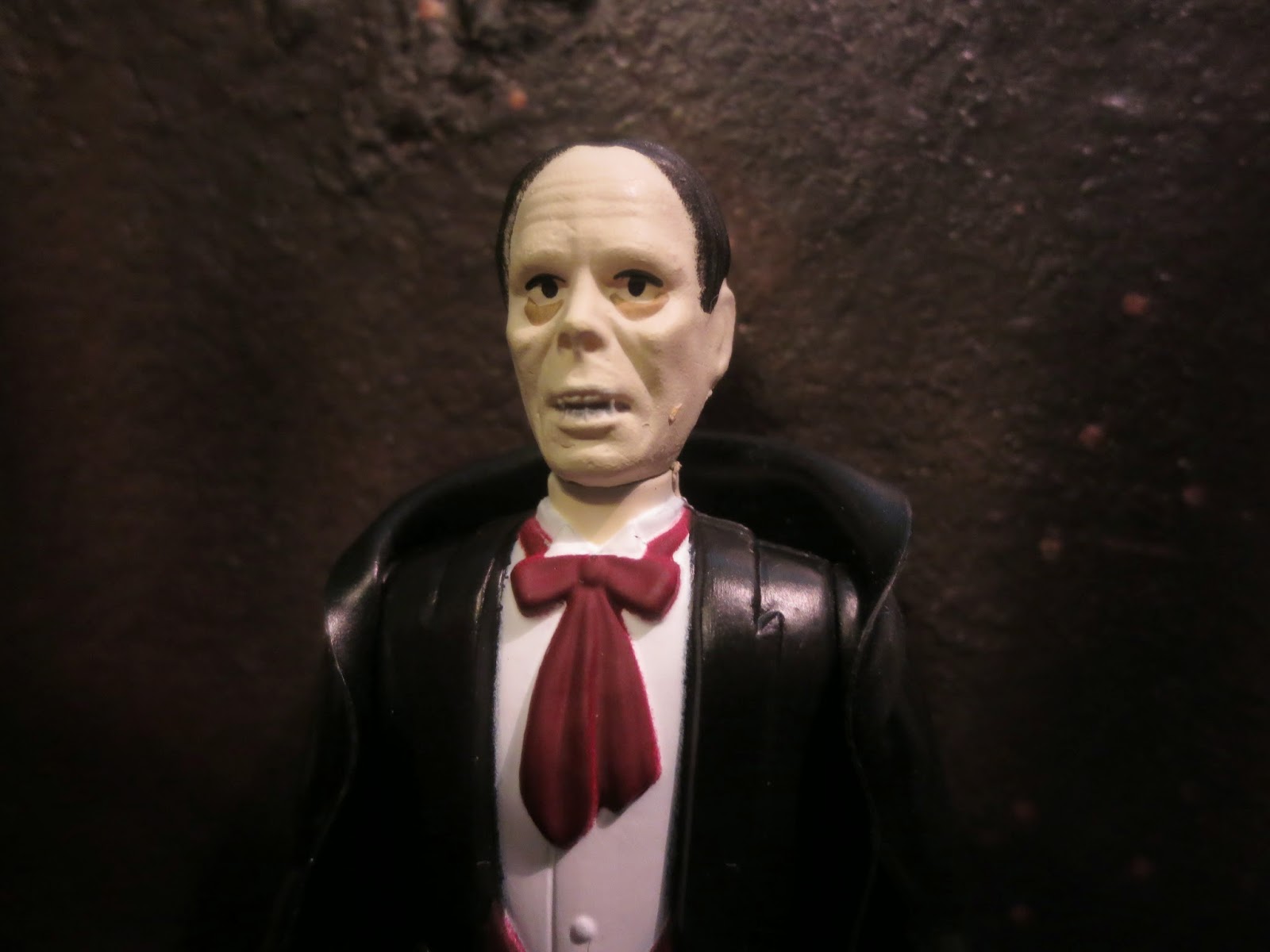 The Phantom looks super sharp in his black suit coupled with crimson highlights and a crisp white shirt. The paint work is really nice and clean. His skin is a pale, sickly color. It's not green but instead looks rather pasty. His teeth and the bags under his eyes receive their own paint apps that really improve the sculpt. This guy really does look quite impressive an creepy. 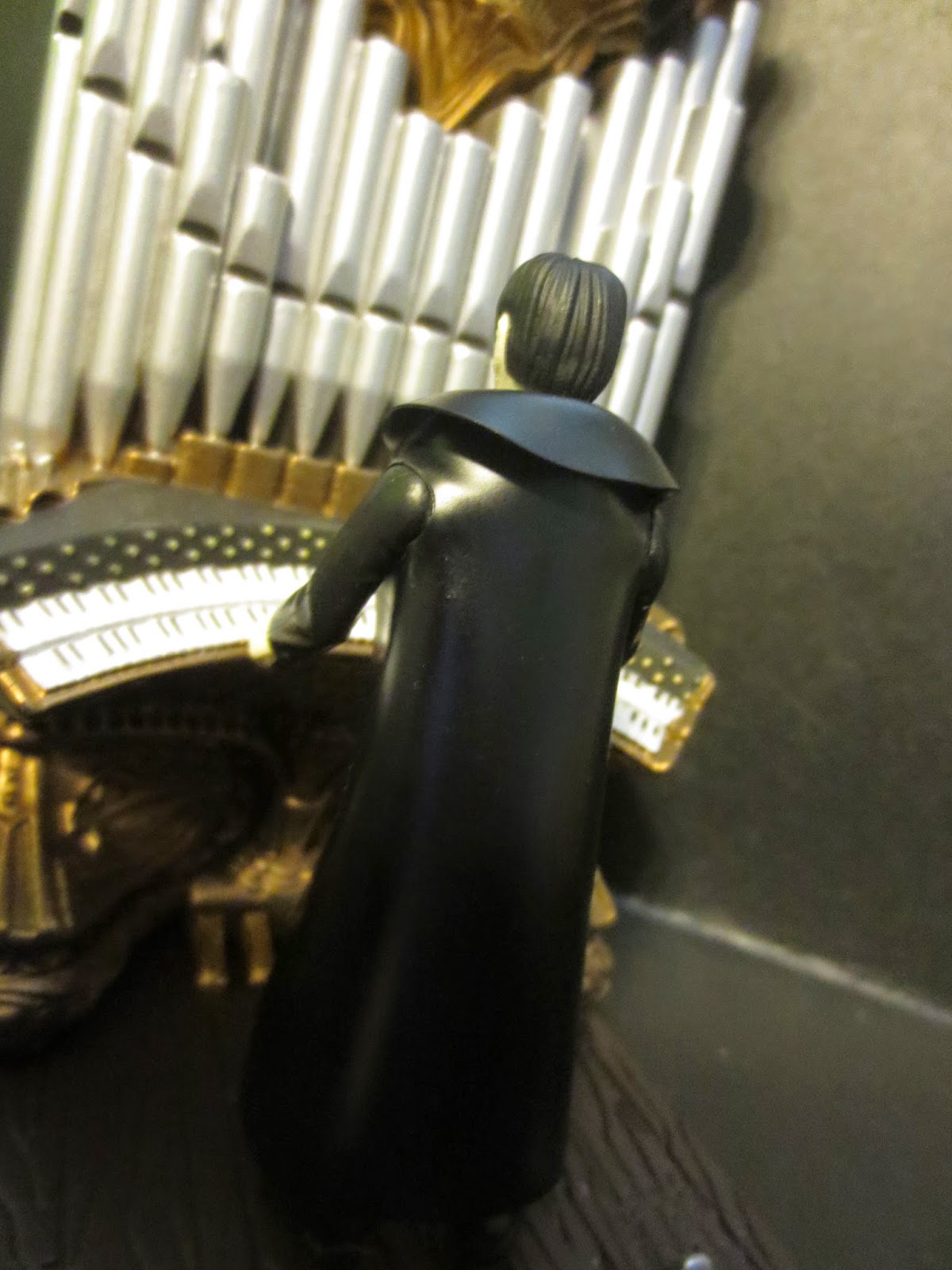 None of the Universal Monsters come with any actual accessories that they can hold, but the Phantom does come with an extra outfit piece: A vinyl cape. Similar to the vintage Kenner Darth Vader's cape, the Phantom's cape is a thin piece of vinyl that fits over his shoulders. It is removable, but I'm leaving mine on so as not to risk tearing. Honestly, while some folks might not be too keen on a vinyl cape, this is exactly the kind of think that gives me a huge wave of nostalgia. I really dig it (Dracula also has a similar vintage cape). 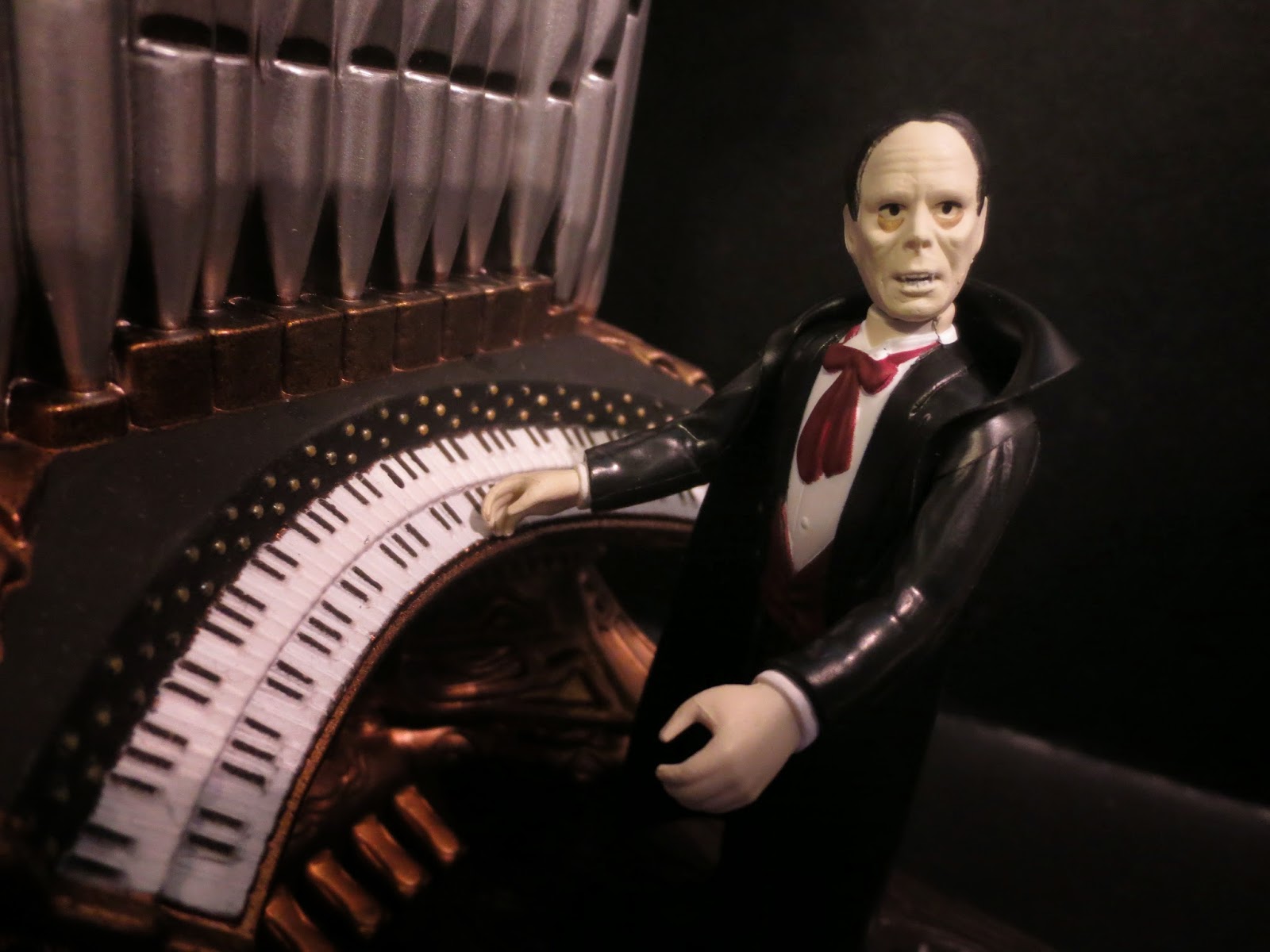 As far as these ReAction Universal Monsters go, I think it is safe to say that the Phantom is closer to the top than the bottom. He's got a great sculpt, great paintwork, and a cool vinyl cape. While I would have liked a bit more expression on his face (and more visible nostrils) he still turned exceptionally well. All things considered, I'm giving this guy a Great and a 1/2. For fans of the Phantom of the Opera, this guy is too cool of a toy to pass up. He's not the best figure in the line, however; that figure is still coming....

Check out the previous days of 31 Days of Toy Terror if you've missed them:
Day 1: Tree Warrior from True Legends
Day 2: Erick Rowan from WWE Elite Collection
Day 3: Momo, the Missouri Monster from Legendary Monsters
Day 4: Jason Voorhees from ReAction Horror Series
Day 5: Fortune Teller from Lego Minifigures Series 9
Also, make sure to participate in our Best. Halloween. Ever!!! contest here.
I've also reviewed a couple of the other Universal Monsters and Horror Series figures from Funko:
The Invisible Man
The Mummy
Freddy Krueger from A Nightmare on Elm Street
Jason Voorhees from Friday the 13th