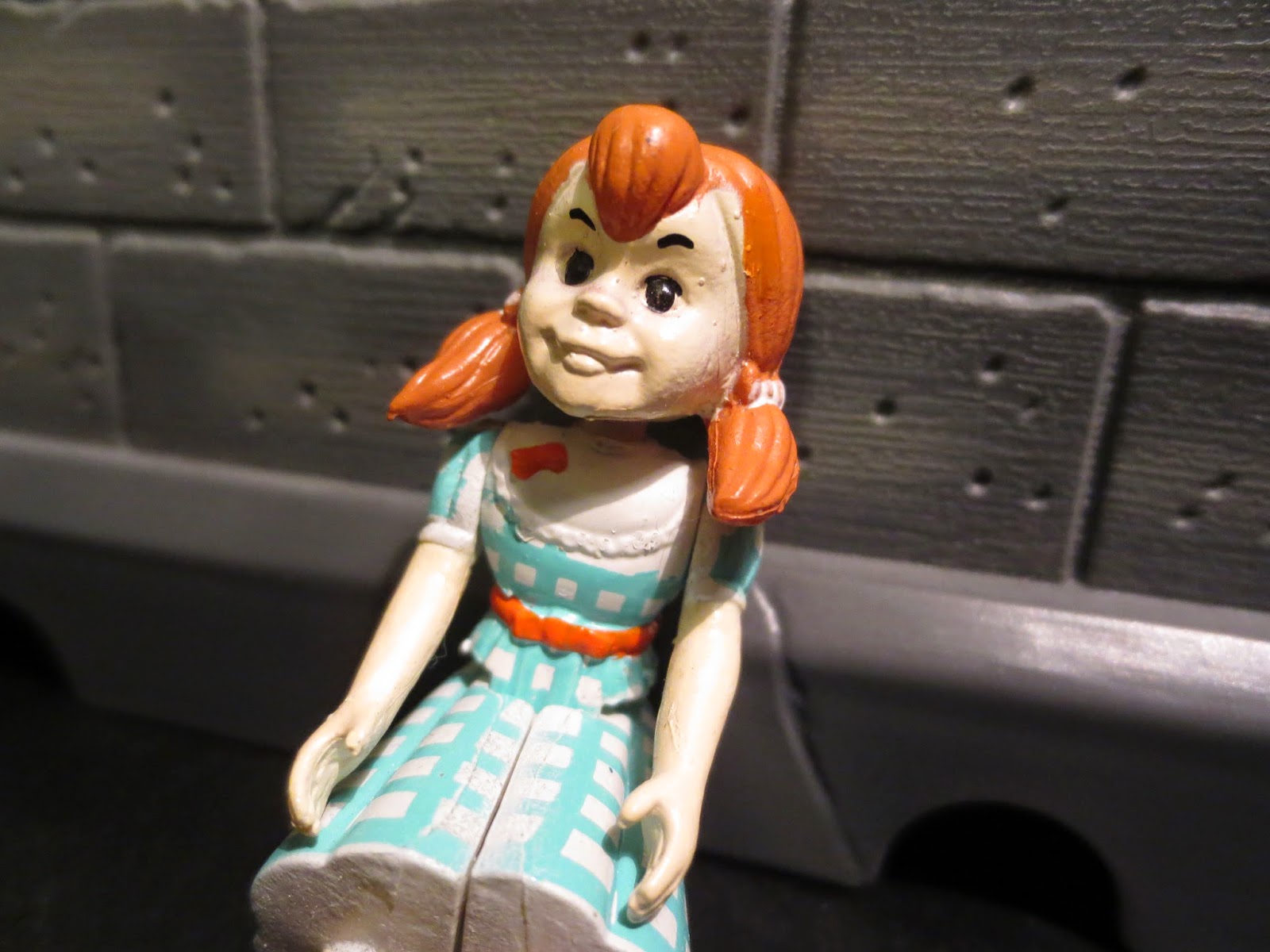 Today is technically day 25 of 31 Days of Toy Terror, but I'll be putting a few missed days up over the next few days to make up for the18th through the 22nd!

"Talky Tina, a doll that does everything, a lifelike creation of plastic and springs and painted smile. To Erich Streator, she is the most unwelcome addition to his household - but without her, he'd never enter the Twilight Zone."

What is it about dolls that makes them scary? Maybe it is because they often so closely capture certain elements of humans while completely missing or neglecting other elements, thus entering the uncanny valley? Who knows? (I'm sure someone has done lots of research on this.) Today I'm looking at another figure in Bif Bang Pow's The Twilight Zone 1/18th scale action figure line. As seems to be popular this year Bif Bang Pow has intentionally designed these figures to mimic elements of retro action figures. Today I'm looking at Talky Tina, the creepy killer doll voiced by June Foray and featured in the fifth season episode "Living Doll". While inspired by Mattel's Chatty Cathy, Talky Tina was actually played by a Brikette doll from the Vogue doll company, so what we have here is a toy of a toy who was playing a toy based on another toy. How successful is this figure? Well, join me after the break to find out.... 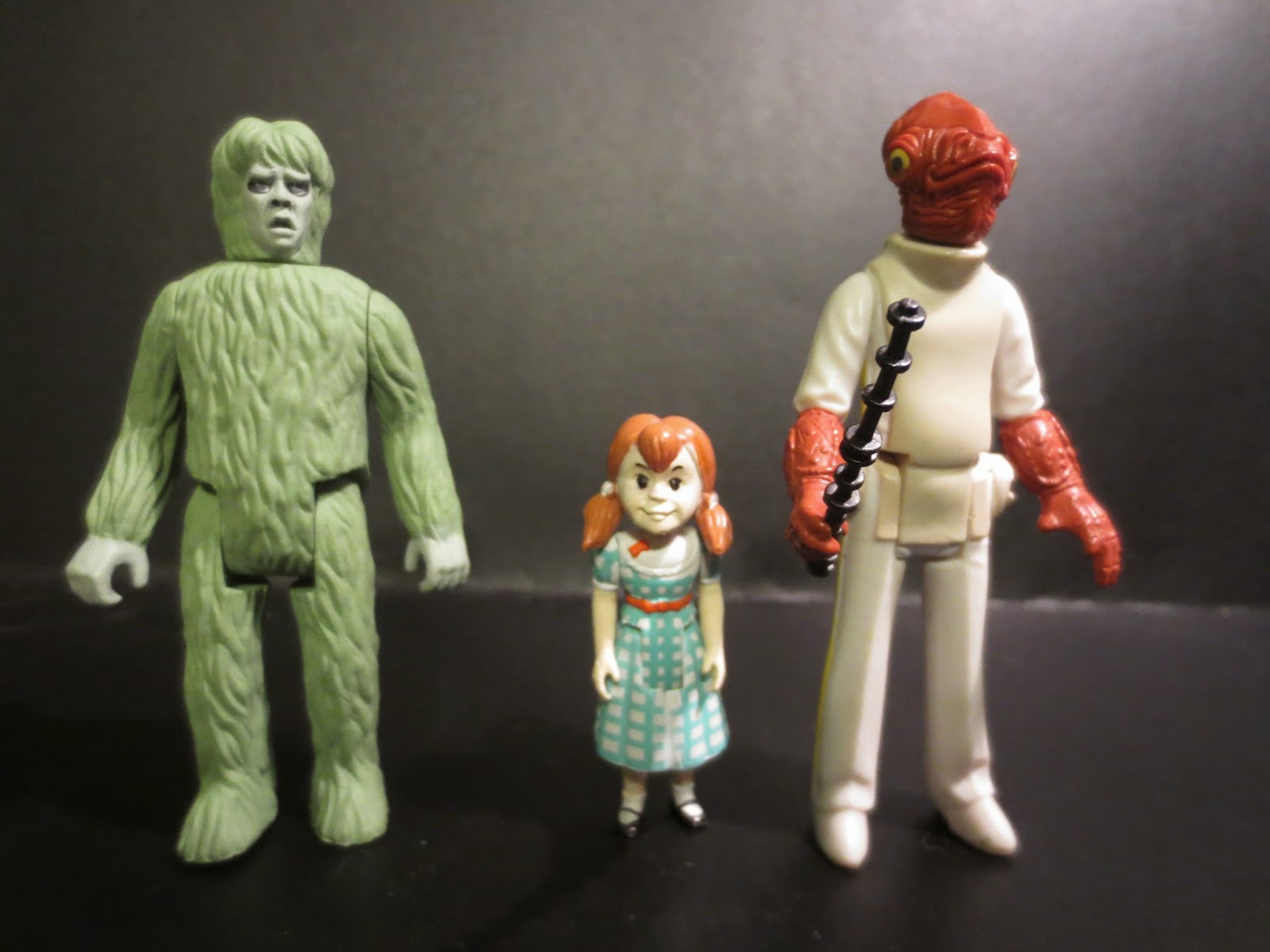 Three things: First, this is a faux retro line, so the figures are rather simple. If these were old Kenner Star Wars Kenner, they would be from the 1985 Power of the Force wrap up line. Second, since Talky Tina is supposed to be an actual child's doll, she is quite short. She's just a little over 2 1/4 inches tall. She might be a little large scale wise (most dolls for children are not over half as tall as a average man) but any smaller and she would have really seemed more like an accessory. Third, she does have an odd style that feels more toyetic, even compared to other retro based figures. She could easily work as a doll for any 6-7 inch action figure as well. Bif Bang Pow! has released both this color version and a black and white version of the Twilight Zone figures with the only difference between them being the paint and a sticker on the packaging. 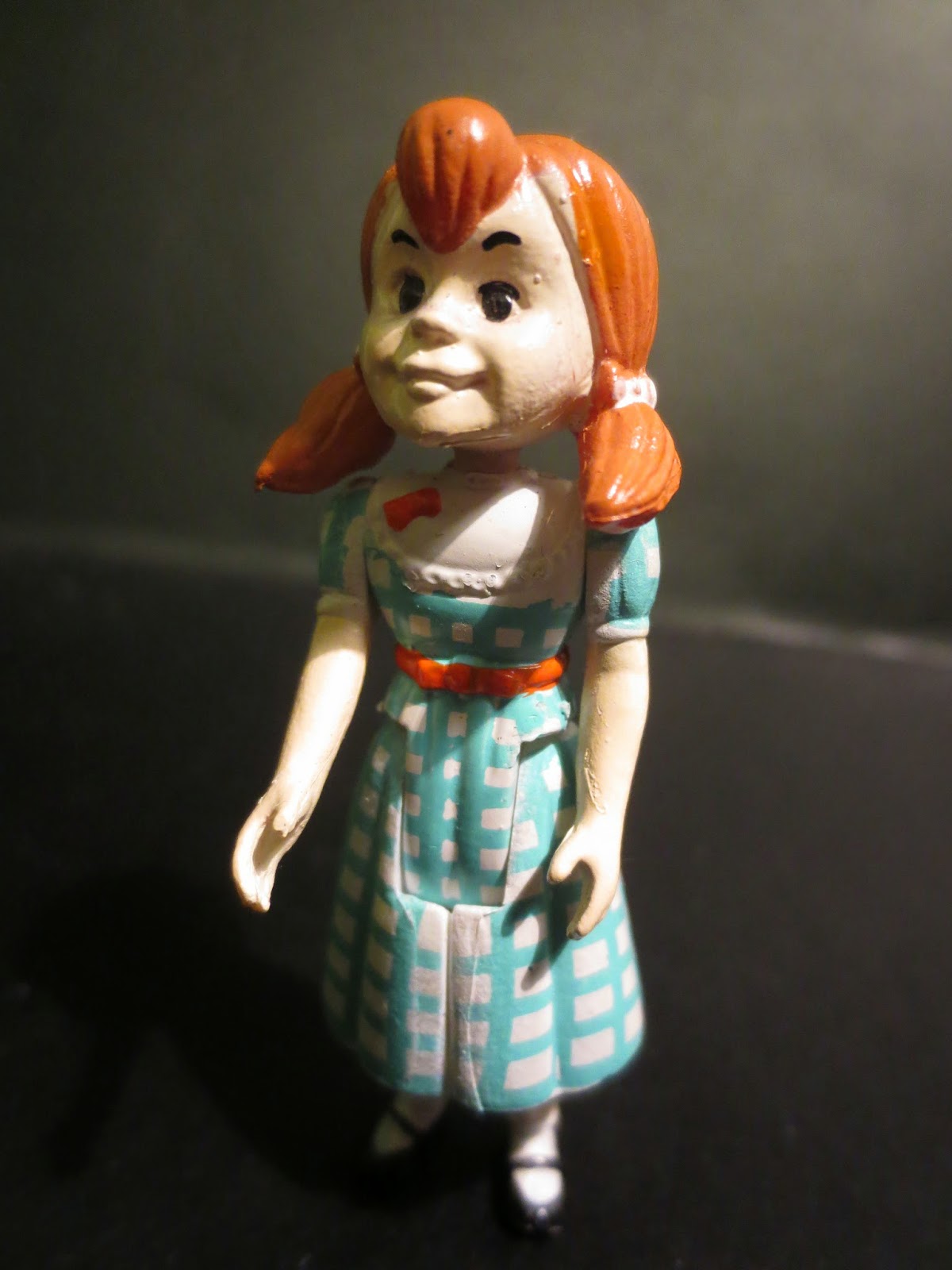 Talky Tina features the same five points of articulation you'd expect on any of the plethora of faux retro action figures out there: Swivel hips, swivel shoulders, and a swivel neck. Since she's wearing a skirt, the legs split apart in a way that splits the skirt in half (like the vintage Emperor figure). Where Funko has had some problems making this work, Bif Bang Pow has done a  nice job on making sure the two halves meet up with no thigh gap whatsoever. I do have a problem with my figure's neck swivel, though. The neck is thin, feels a bit rubbery, and seems to be stuck. I'm hopeful that some heat and cold could fix things, but I'm really nervous about twisting the neck right off. Be careful! 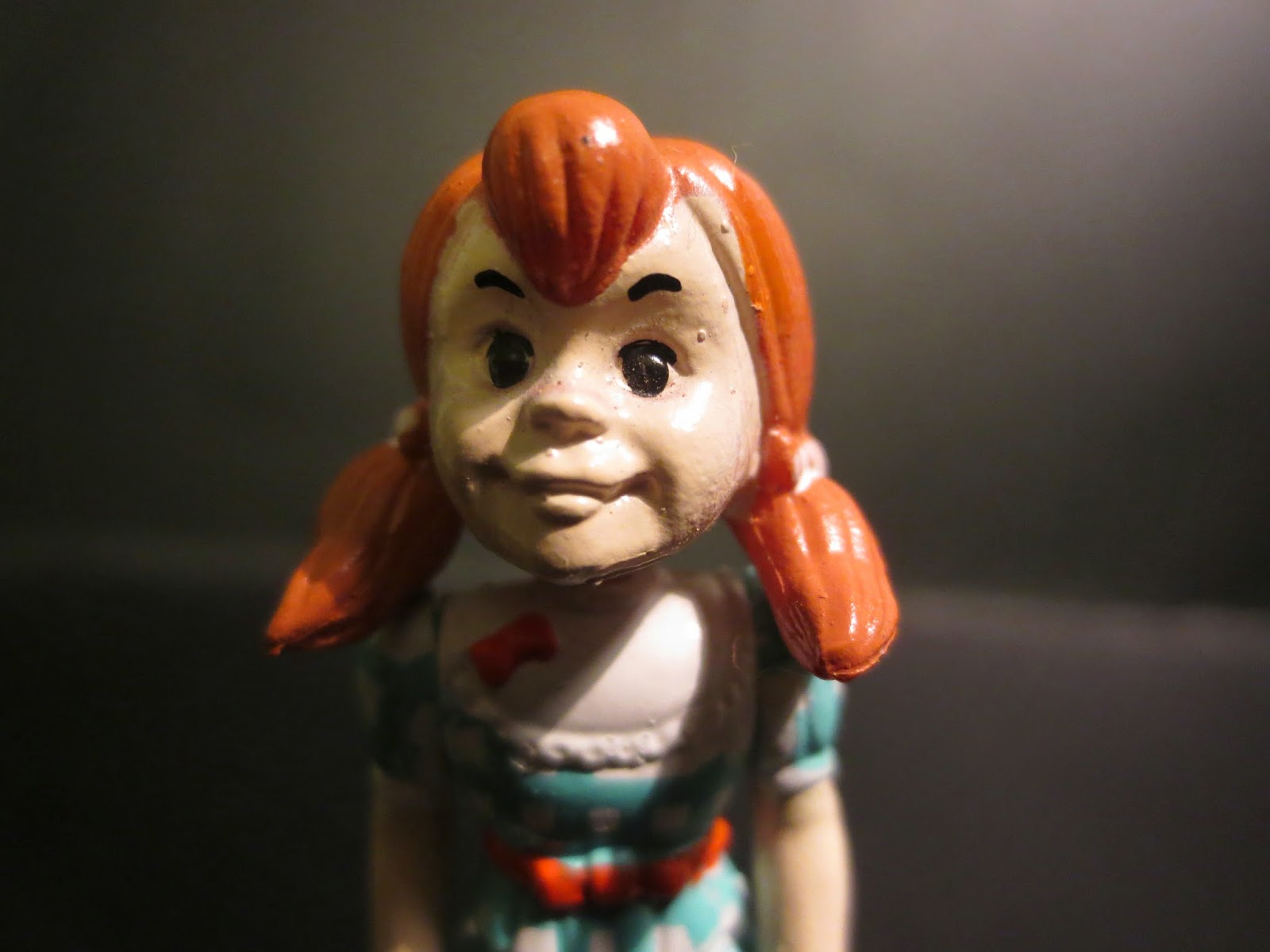 I'm not the biggest The Twilight Zone expert out there, but I think this is a pretty decent Talky Tina likeness. Anyone who has seen the episode or who is familiar with it would probably be able to recognize the character because of the hair and the oddly shaped face. She manages to not look insanely creepy in a "why the hell would you even buy this doll kind of way", but still has an off putting vibe. Her outfit looks quite accurate with the dress with little bows and stuff and her dainty feet are captured (although she can still stand). She's not bad for a small action figure based on an evil doll. 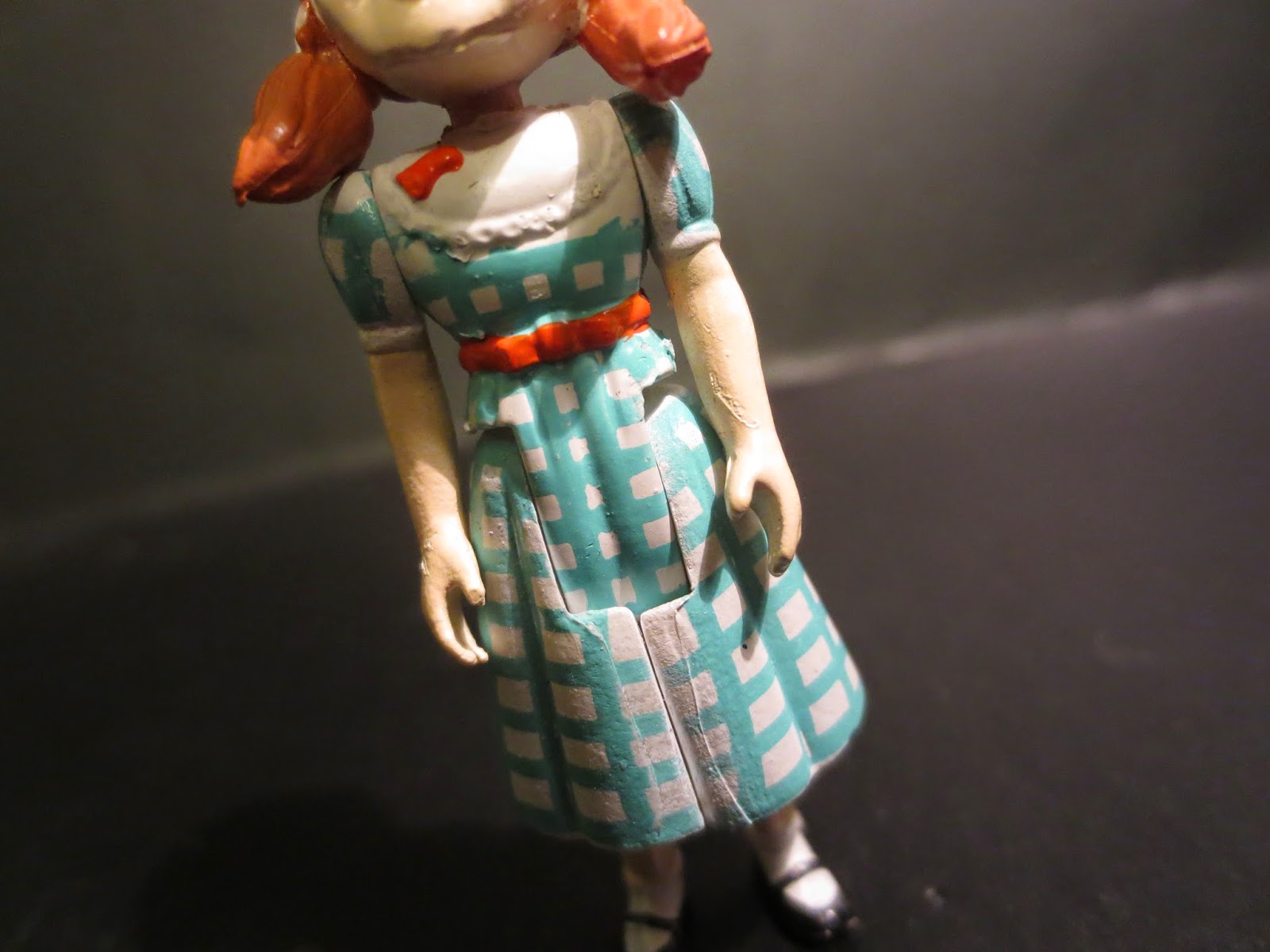 The paint work is so-so. I think Bif Bang Pow! intentionally tried to make her look more like a toy through an overall brighter paint job than other figures in the line, but the messiness of a few spots definitely stands out. The checkered print on the dress looks good in some places but fails across the front where the hips meet up, the edges of the sleeves, and the top where it meets the frilly neck thing. What's that called? A doily? There's also some messy lines where the hair meets the head and the face paint looks really mottled and splotchy. Does the tall have leprosy, perhaps? 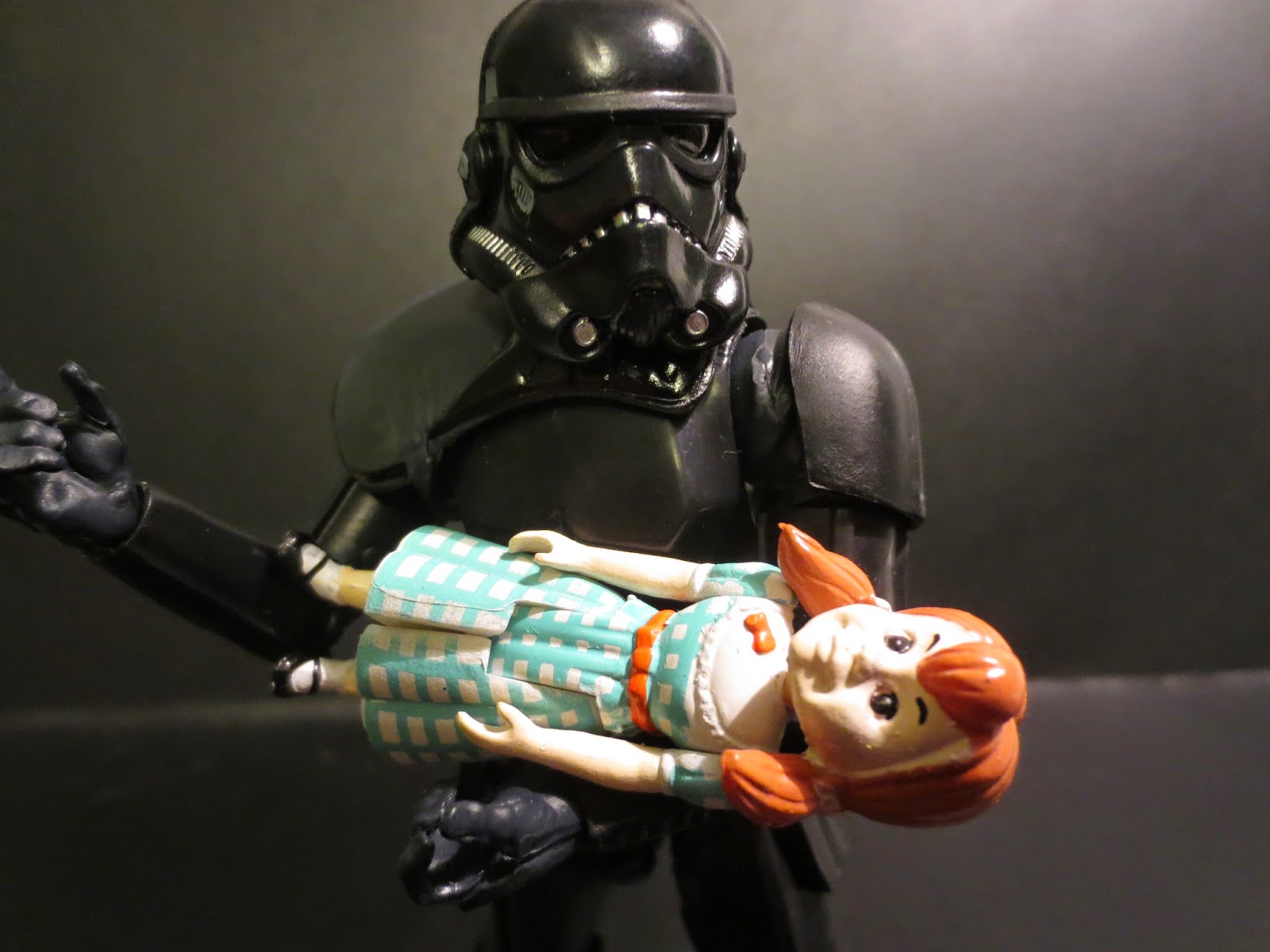 Talky Tina comes with no accessories. None at all, and I think that's a problem with this figure. She is so darn small and comes with nothing else. Honestly, she should have been a painted accessory and come with a figure of Telly Savalas' character, Erich Streator. I get the fact that Talky Tina is a recognizable character and was a shoe in for the first series of figures, but this figure should have been tackled a bit differently. I'm just not really sold on her. The sculpt is decent, but the paintwork, rubbery and stuck neck, and lack of any accessory hurt her. I'm giving her an Eh rating. I love the idea of creepy dolls. I mean, I wouldn't want one to show up at my house or for someone to give my kid one as a gift, but I totally will validate their role in horror. I just think this figure could have been executed in a more satisfactory manner. She's an iconic character, however, and makes a great addition to a horror collection (particularly a 6-7 inch collection) but she's just not a very good toy in and of herself. Also, don't leave her on the stairs. I've heard bad things can happen....