Zombies are apparently so popular and mainstream now that even Fisher Price is releasing zombie toys. What the heck? Let me indulge my inner hipster a bit and say "I was into zombies before being into zombies was cool." With that out of the way, I'm back to look at another great figure from Imaginext's Collectible Figure Series 3: The Zombie. I really hope Fisher Price continues putting these blind bagged guys out because they just keep coming up with more and more interesting stuff! Who knows what awesome figures a potential fourth series could offer? Anyways, it just isn't the Halloween season without a visit from the rambling, shambling, walking dead, is it? Here's a look at the Zombie from Imaginext, after the break... 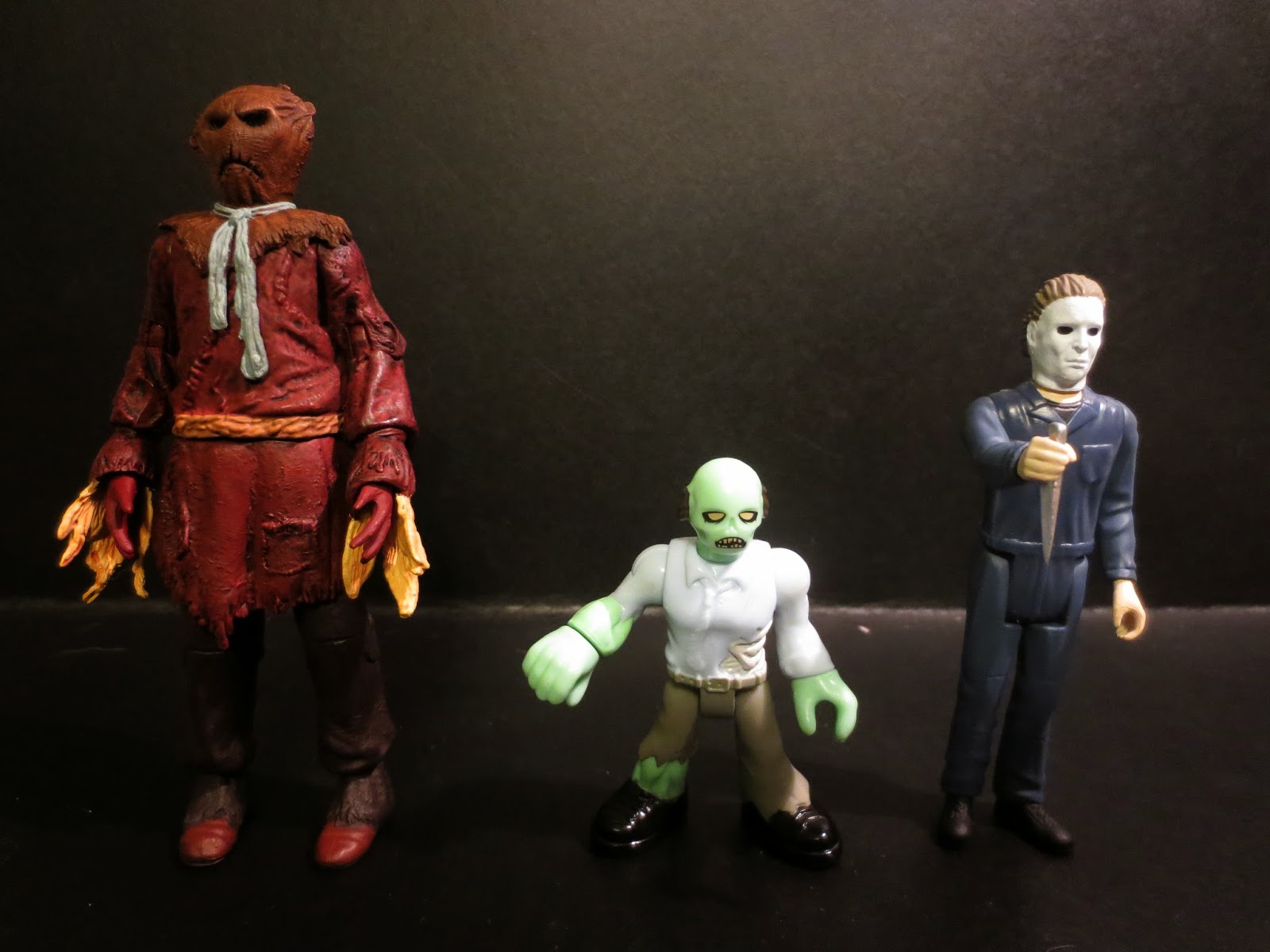 These guys stand just a little under 3 inches tall and feature a very charming aesthetic with larger hands and feet. Imaginext has released a wide variety of play themes including DC Superheroes, knights, ninjas, pirates, and spacemen; all of which are improved by the presence of zombies. They strike a nice balance between being cutesy and over stylized and being cool, which I can appreciate. Remember, while these guys come in "blind bags" they also feature imprinted numbers that let you know which figure you're buying if you have a list. The Zombie is #35, FYI. 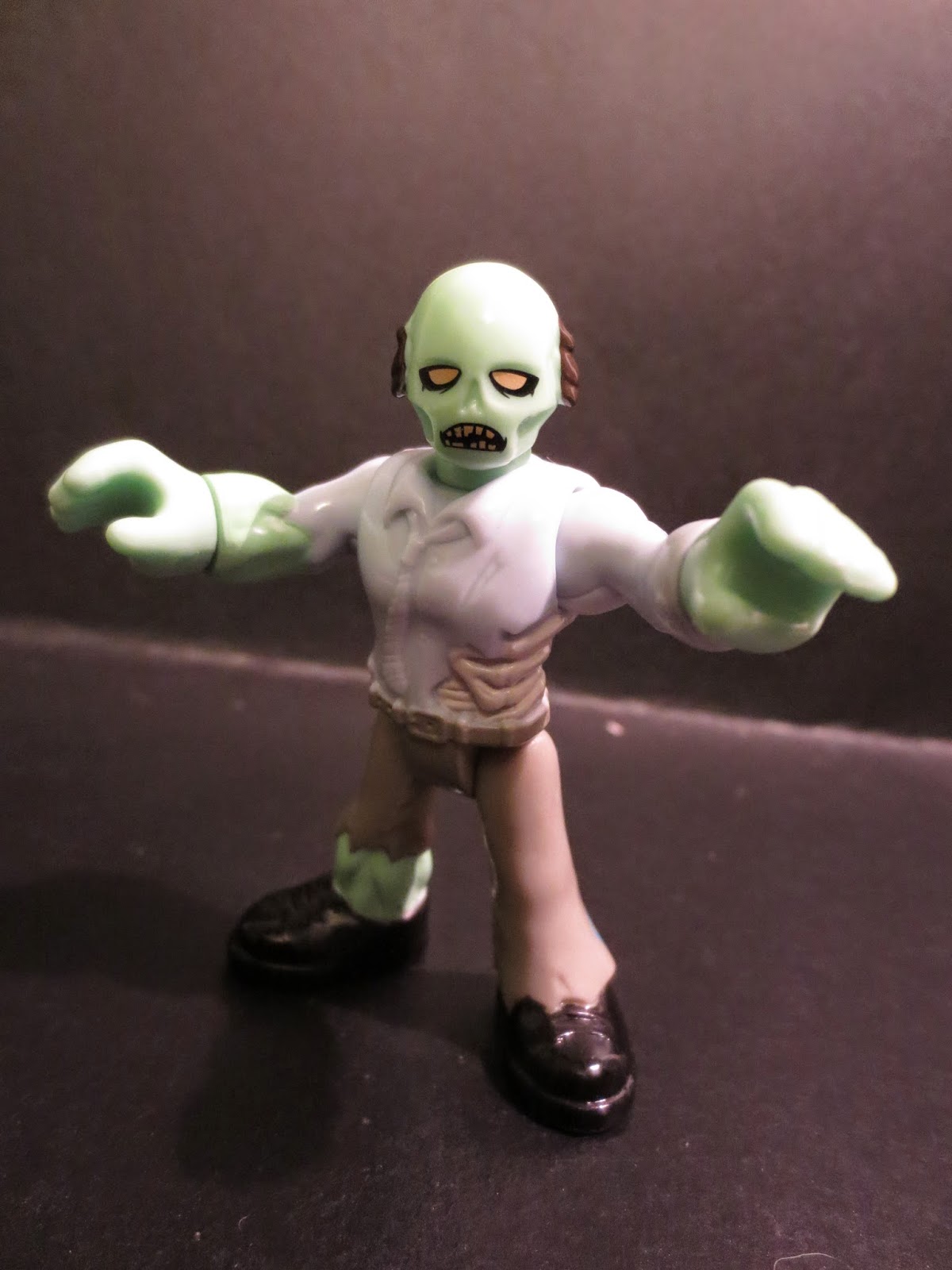 Most of the Imaginext figures have the exact same articulation: Hinged hips, swivel/hinge shoulders, swivel wrists, and a swivel neck. For a figure of this size, that always seems like enough movement to have some real fun. Not only can you make this guy hold his arms out and walk forward (just like a real zombie!) but he can hold his weed whacker with both hands. Oh, did I mention this zombie comes with a weed whacker? Because he totally does! 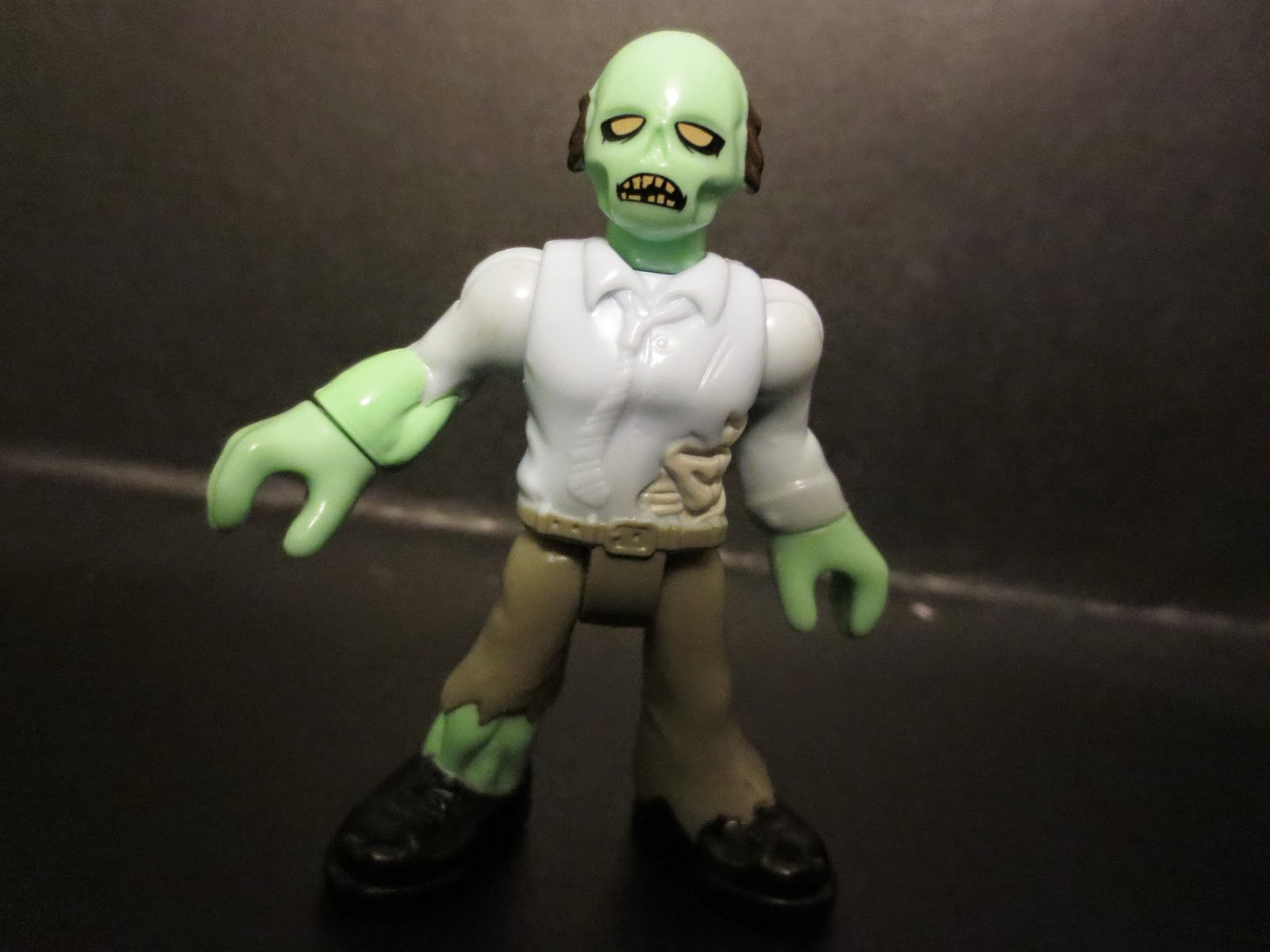 I'm not really a fan of the funny, cutesy zombies that we're seeing pop up in more and more pop-culture memorabilia. Of course, a serious looking zombie would be a bit disturbing in a line like this that is targeted to children. This zombie is a great compromise between those two competing philosophies of zombie portrayal, and for that I'm quite satisfied. This is a pretty traditionally dressed zombie: Dress shoes, ripped Dockers, and a tattered dress shirt with a crooked tie. He has a great disheveled appearance that looks even better when you consider that a large part of his left side is missing. Yes, you can see his ribs and spine! The face is also wonderfully different from your standard Imaginext figure as he is missing his nose, has sunken cheekbones, and two tufts of crazy hair. This is a rather great zombie! 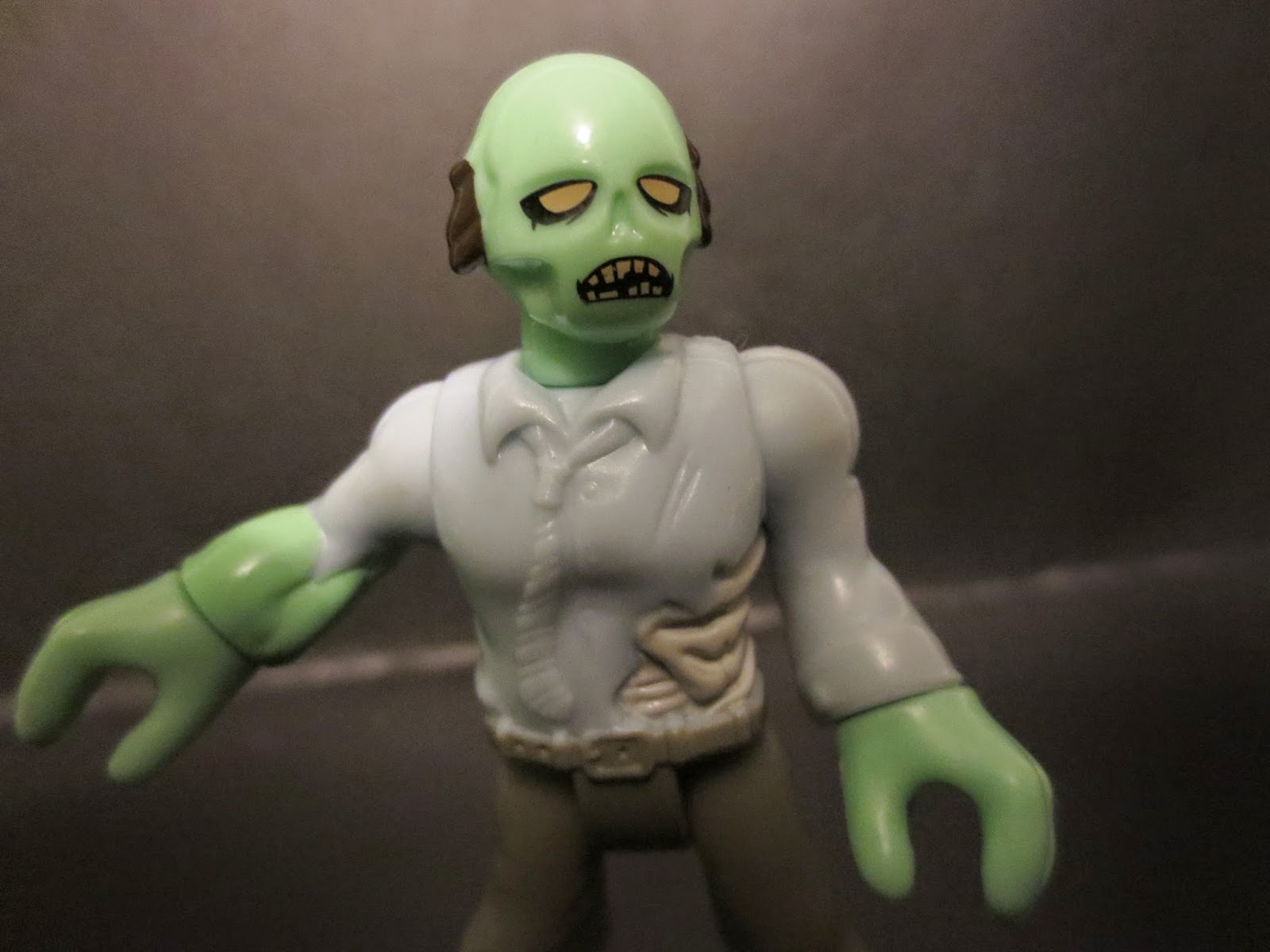 The paintwork is simple and clean with nice, muted colors. The skin is a pale green (I wish it glowed in the dark) and the yellow eyes and crooked teeth tampographic stamp just seal the deal. Since the Imaginext logo is included on most every figure, there is a little stylized "i" on the bottom left pant cuff. 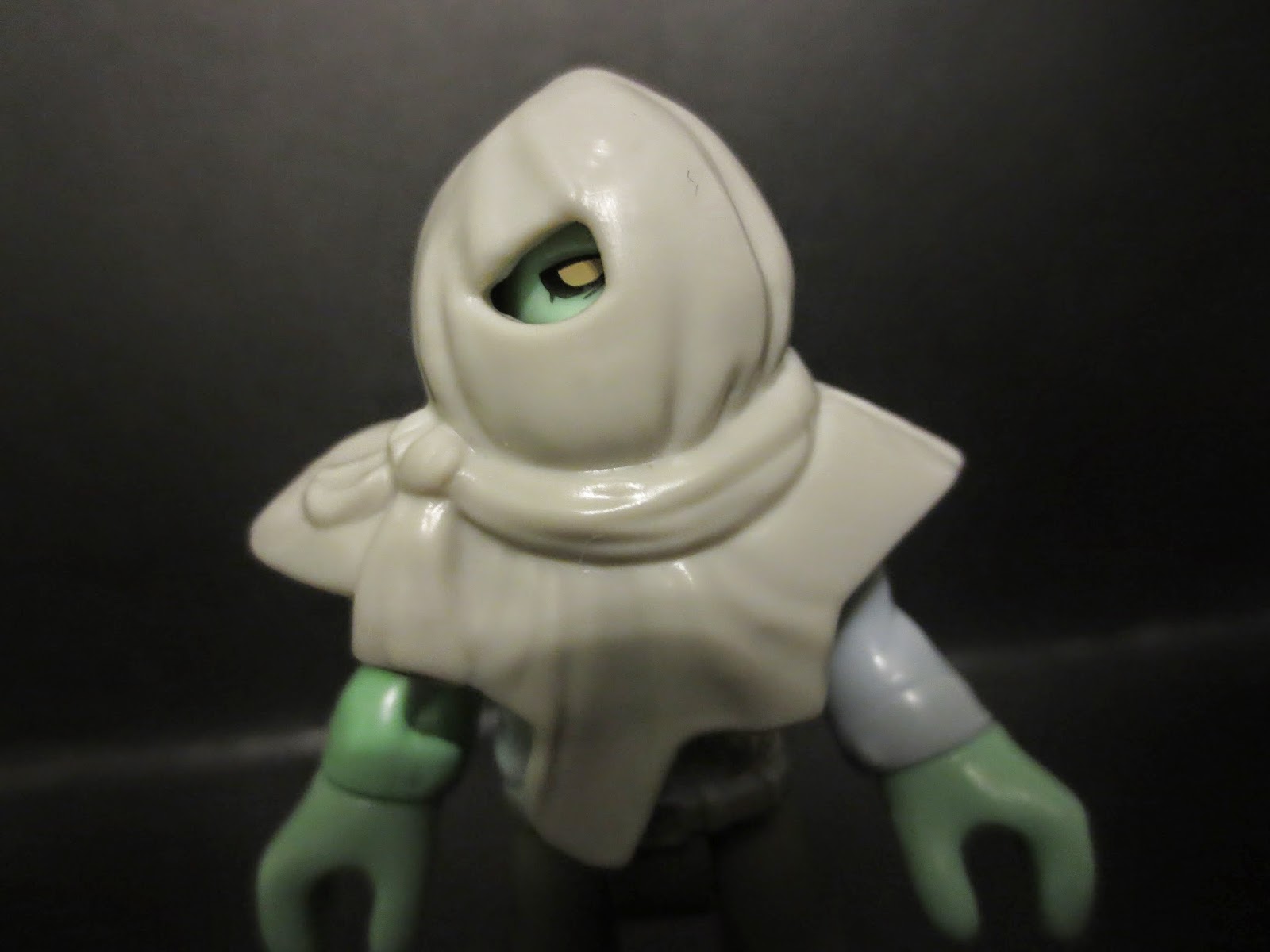 The Imaginext toys come with some great little extras and this lucky Zombie comes with two: A bag to wear over his head and the aforementioned weed whacker! The bag is a rubbery plastic piece that looks like some sort of burlap bag with a hole in it. It fits over the Zombie's head and, if positioned correctly, allows you to see one of his eerie yellow eyes peeking through! It really reminds me of the bag Jason Voorhees wore over his head in Friday the 13th Part 2, which is really cool but also kind of bizarre for a kids toys. 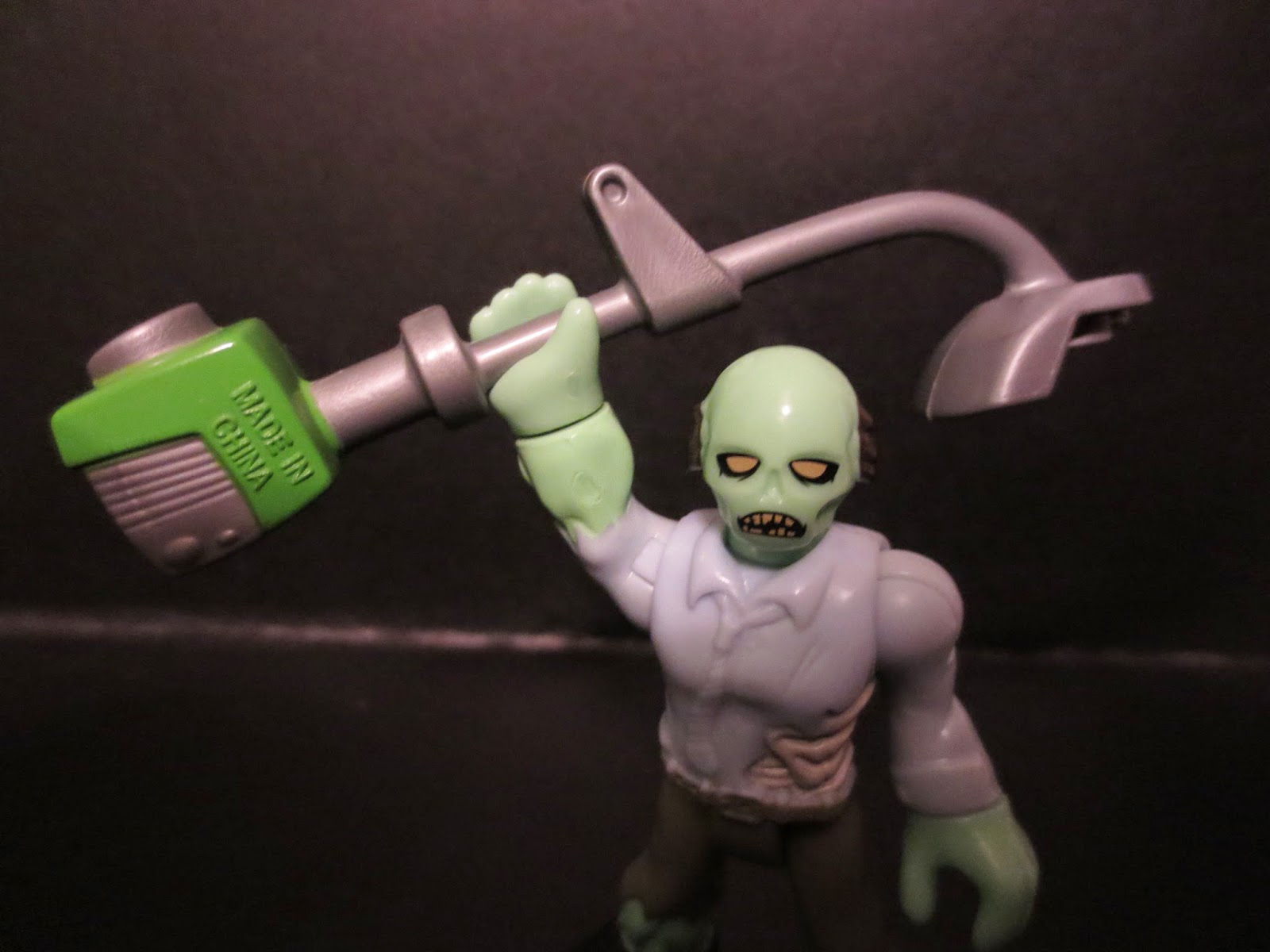 His second accessory, a weed whacker, is incredibly unusual. Has any figure other than Pathfinder from G.I. Joe ever come with a weed whacker accessory? I think more figures need to because this is a great accessory. I was trying to determine why a zombie would come with one, though. Perhaps this is a reference to Plants Vs. Zombies? I was also thinking Zombies Ate My Neighbors, but that might be a bit too obscure and, besides, the heroes used weed eaters, not the zombies. 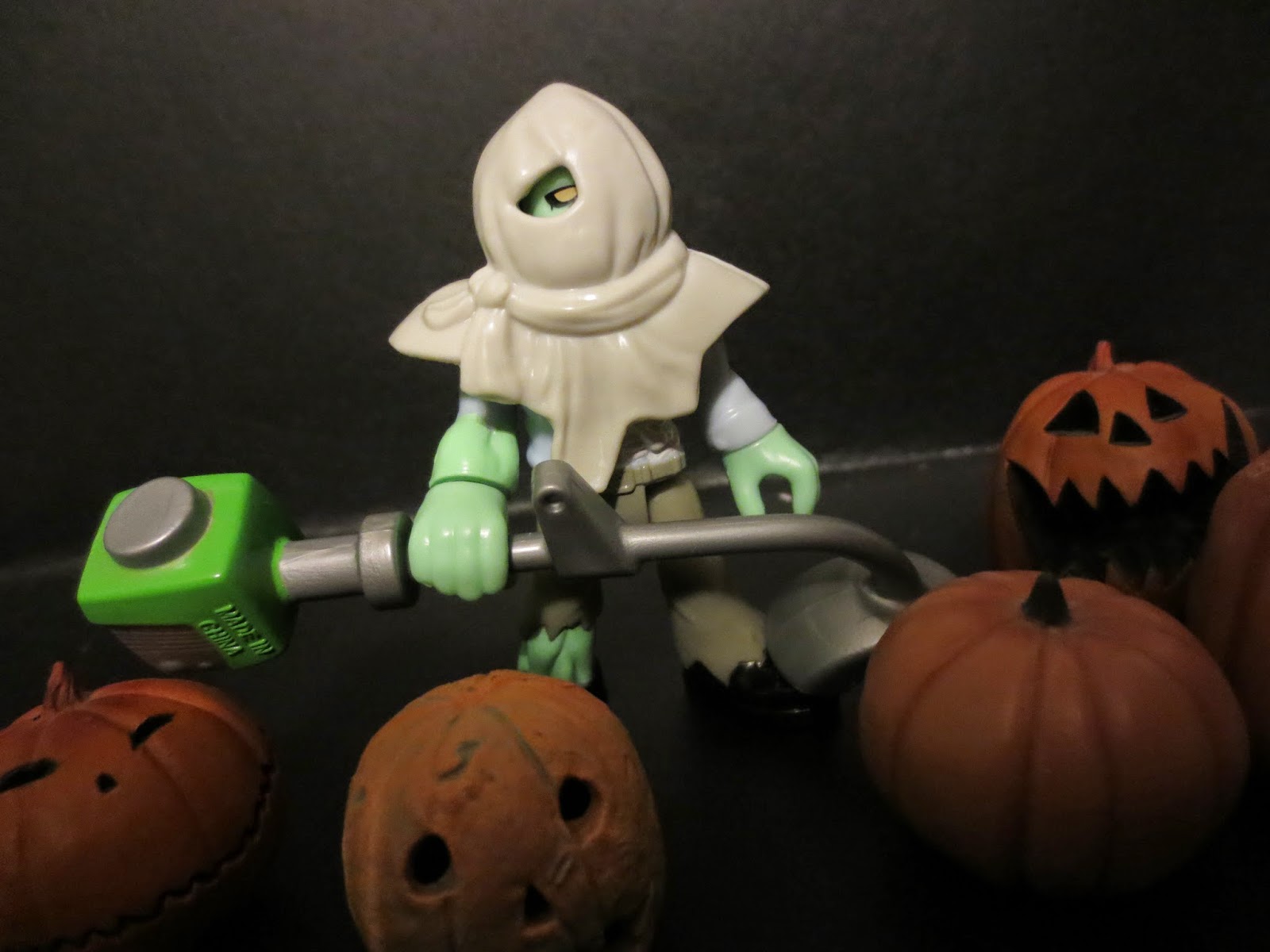 This is a darn amazing figure. Sometimes it is something simple or unexpected that impressed you and my stars, this Zombie impresses me. He's just gruesome enough to be a good zombie while still being kid friendly enough to be a decent toy. He's well made, has a great facial expression, and my gosh does he have two really cool accessories. I'd love to pick up another Zombie or two and I'm guessing other Imaginext fans feel the same way. When we look at everything awesome about this guy, I can't help but give him an Epic rating. He is perhaps the perfect example of the kind of coolness that Imaginext is capable of! Go collect these toys now! Buy up all the blind bagged figures from them you can find! Show Fisher Price that we want... no, we need a series 4 of these guys!