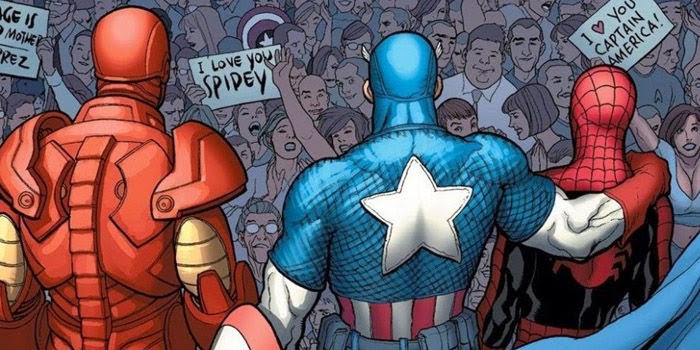 Spiderman has finally come home! After months and months of speculation following the Sony hack and years of wishing by fan boys Spiderman is now officially part of the Marvel Cinematic Universe.  A deal was struck last night that will allow Sony and Disney to share the character, allowing Spiderman to show up in the MCU and MCU characters to show up in Sony Spiderman films.  The new Spiderman who has been confirmed not to be Andrew Garfield and will fist appear in Captain America 3: Civil War on May 6th 2016 then get his own solo movie on July 28th 2017.  As a result Thor 3: Ragnarok has been pushed to November 3rd 2017 and Sony has now scrapped the Sinister 6 film.  This comes as an epic surprise to this group of writers considering we just discussed how Spidey was dwindling from the public conscious on our most recent podcast.  The co-produced stories Sony and Disney can now tell are limitless and so is the money they will begin to print, but fans of the Webhead should be the true winner considering that now Marvel Studio's Kevin Feige will produce the stand alone Spidey film for Marvel.

Let us know what you think about the Web Slinger coming home in the comments?

UPDATE: According to Variety the Sony/Disney Spiderman deal did not cost either studio a cent as each Studio gets to keep profits for their respective Spidey films.  Also it has been confirmed the new Spiderman will be younger taking the character back to the High School age range!