Epics News: Domino rumored to be a part of the Dead Pool Sequel 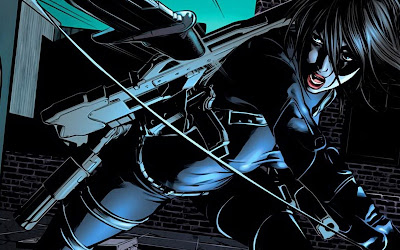 Rumor is that Dead Pool's fellow X-force member: Domino will be a part of the upcoming Dead Pool sequel.  Also first appearing in Rob Liefeld's New Mutants # 98 just as Dead Pool did, Domino has the ability to manipulate  probability thus ever putting the odds in her favor.  This ability over probability also makes the character of Domino an expert Marksmen (Or shall we say Marks Lady).  Domino like Dead Pool has been a member of the black-ops, kill first ask questions later version of the X-men known as X-force.  The addition of Neena Thurman as she is known in homo-sapien, would be a refreshing addition to what now looks like the Dead Pool franchise.  Not only would it give the sequel another very strong and independent character to join the Nega Sonic Teenage War head, but it would be another steps towards the inevitable X-force film that will be coming from FOX. Dead Pool 2 is scheduled to release in 2017, in the mean time we recommend X-Force volume 3 written by Craig Kyle and Christopher Yost to increase your probability of knowing the character by the time the film hits.

Let us know what you think about Domino's rumored addition to Dead Pool 2, and what actress you would like to see play her in the comments below! (BTW our pick is Rebecca Ferguson from last summer's: Mission Impossible Rogue Nation)

Thanks to CBR for the rumor