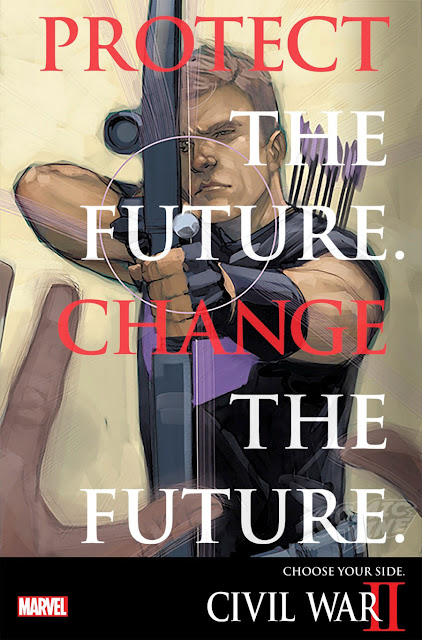 Marvel has released yet another Civil War II comic character teaser, today it's Hawkeye. One of my top ten favorite heroes and probably the most under rated Avenger.  It is refreshing to know the purple archer will play a big role in the Civil War sequel comic unlike in the original series.  Now this probably has a lot to do with him being in the Film version of Civil War out May 6th, but if it means more Clint Barton I'm all for it.  Civil War is my all time favorite Marvel crossover event so I have high hopes for this series, and hope it is more than a cash grab film tie-in.  The prequel event: Avengers Standoff on Pleasant Hill, seems to be pointing the message of the series toward the  treatment of detainee's.  That series features a new Marvel prison facility that is an original interpretation on a place like Guantanamo Bay, and the debate of wether it needs to be open is front and center with Captain America on one side and SHIELD on the other.  While I think Civil War II will deal with more issues than this, it's a great sign the series seems to taking on real world issues again the way the original did the Patriot Act!

Are you excited for Civil War II? Let us know in the comments below!