Check It Out: Marvel Legacy #1: To Debut Avengers 1 Million BC 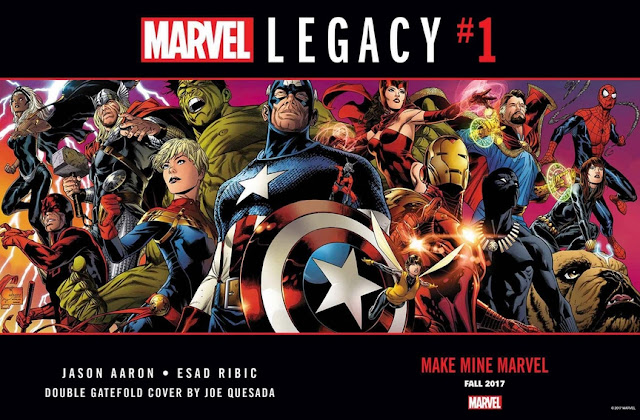 Once again Marvel is promising to change everything this September with Marvel Legacy, however this time that is supposedly going to be accomplished by a one shot rather than a 10 part summer event that would cost you over $50 to collect.  Rather than changing every thing the tag lines for Marvel Legacy are: "Its All Connected" and "Make Mine Marvel", the first being a motto for the MCU, and the second being classic saying from the Stan and Jack days of Marvel Comics.

Get the our thoughts on the latest new Avengers team and Marvel Legacy after the break...

The combination of these two catch phrases should give Marvel Zombies some semblance of hope as they promise to mix the best of the past with the best of the present.  Speaking of the past, it appears that Marvel Legacy will start there by introducing readers to the Avengers 1,000,000 BC.  The BC Avengers team will consist of: Odin, Star Brand, Phoenix, Agamotto, Ghost Rider, Black Panther, and Iron Fist.

Personally I am thrilled to see the past meet the present, and for Marvel to compartmentalize their comics universe a bit.  Reading the tealeaves a bit here it seems like we care going to get a return to classic story telling, with the connectivity of the MCU and days of Marvel Comics gone by.  My only fear is that this is done with the result of ditching the strides in diversity that Marvel has made over the past 5 years.  For now we will have to wait until September 2017 to get these answers when Marvel Legacy hits shelves written by: Jason Aaron with Art by: Esad Ribic and Joe Quesada.