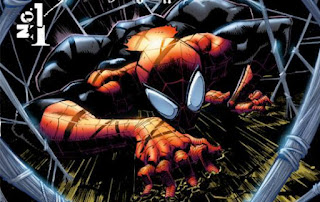 As I said when the blog launched we will be reviewing some other things besides film such as comics hopefully with reviews to come of a few more of the Marvel Now # 1's such as Uncanny X-men and the Guardians of the galaxy,  but in the mean time what better place to start than a new beginning for Marvel's most beloved character in Dan Slott's Superior Spider-man #1.

By this point most everyone knows that Peter Parker died in issue #700 of the Amazing Spider-man, well sort of.  Doc Ock earlier in Amazing Spider-man had pulled a freaky Friday between he and Peter, and  Pete's last act before Doc Ock's body finally gave out was to transfer his memories into Ock's brain, which is now in Peter's old body.  Long story short Ock's body and Peter's mind are dead, so now you have Pete's body with Ock's mind with Peter's memories setting up Superior Spider-man #1.  It's really not as confusing as it sounds!

You may be thinking what the hell Dr. Octopus is the new Spider-man? Well the results are a lot more entertaining than you may expect. We now have an all new edgier Spidey who isn't afraid to cross the line.  It almost gives you the same feeling the first time you read the Symbiote stories.  With one major difference Ock is an all together different kind of smart than Peter, he is just plain downright diabolical which is on display in full force in this first issue as Spidey takes down the brand new Sinister 6.  The biggest shock of all comes near the end of issue #1 as Spidey is about to cross the line by killing a member of the Sinister 6, but Peter's spirit keep him from doing so.  Apparently Peter's spirit now looks like Bobby Drake, but that is whole different issue.

So it is now apparent that the inner Parker within Ock's mind can keep him from doing certain actions, such as taking a life.  This sets up a major battle  within the inner mind of our new Spidey.  The major question is how long until Pete is back, and what then? I am surprised to say that I am really interested  to see what will happen as  Ock lives out Spidey's life over the next couple of months, because so far Ock has made for a pretty bad ass Spider-man.

Rumors are already flying that Peter could be back as soon as issue #8 of Superior, and at that point he will finally come to the realization that wearing the red and blue tights are no longer worth it, but what then? Who will be the new Spidey? Dan Slott has been hinting at the return of Miguel O'hara better known as Spider-man 2099, but does Marvel really want two Hispanic Spidey's with no Parker in sight? Don't get me wrong I love the stuff with Miles Morales as Spider-man in Ultimate Comics, but I think I agree with Millions of fans when saying Peter Parker is my Spider-man damn it!

Also it is important to point out that Ryan Stegman's art is amazing in this book, but it is Ed McGuinness' slight redesign of the Spidey suit that is superior!  I guess we have to give Dan Slott credit for one thing, he has crafted a Spidey narrative so suspenseful that the only thing Spidey fan boys can do now is dish out 8 bucks a month to see what the hell is going to happen to our beloved Peter Parker next!