Marvel's Confirmed Doctor Strange movie, and what it means for the future of Marvel's cinematic universe 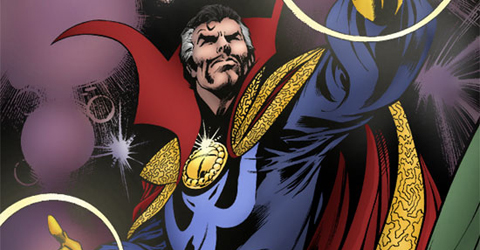 The Marvel cinematic universe got a little stranger Friday afternoon when president of production for Marvel studio's Kevin Feige confirmed plans for a Doctor Strange film in an interview with MTV.  The film will reportedly be a part of of Marvel's phase 3 cinematic plans, hitting theaters sometime after phase 2 culminates with the Avengers 2 in 2015.  So far the only other film that Marvel has slated for phase 3 is the Edgar Wright directed Ant Man, whose test footage wowed at San Diego Comi-Con last summer.  So Ant Man aside, what does this planned Doctor Strange film tell us about phase 3 of Marvel's plans for it's lucrative studio, now owned by Disney?

Since Doctor Strange is the center of the mystical universe within Marvel it could mean that is exactly what phase 3 will deal with.  Similar to the way that phase 2 will revolve around the cosmic areas and characters of the Marvel universe such as Thanos and the Guardians of the Galaxy.  This could leave us to believe that perhaps Thano's infinity gauntlet may make it through phase 2 and even play a prominent role in phase 3, perhaps elevating someone such as the hood to become the main antagonist in a Doctor Strange film, or even a 3rd Avengers film.

However all of these assumptions contradict what Kevin Fiege said during a meet the film makers event in London in April of 2012, when he stated the he believed Marvel's Civil War would be the right story line for a 3rd Avengers film.  Which would make perfect sense considering that Civil War changed the face of Marvel comics last decade, and would make for one epic superhero film.  While Civil War may make for an incredible third Avengers film, it wouldn't make sense to bring Doctor Strange into that event considering he spent the entire Marvel Civil War in solitude as a pacifist.  There is however one way Marvel could use Doctor Strange to help set up Civil War, and that would be putting a major emphasis on the Illuminati during phase 3.  The Illuminati are a secret organization within Marvel comics that work together in order to mold the superhuman world, and the worlds perception of it.  The Illuminati originally consisted of a cast of Marvel's heaviest hitters: Doctor Strange, Iron Man, Namor, Black Bolt, Charles Xavier, and Reed Richards.  Of course the Illuminati roster would need to be reset, because Fox owns the film rights to both Professor X and Reed Richards.  This Illuminati played a pivotal role leading into Civil War, which would be fascinating for Marvel fan boys everywhere to see played out on the big screen.

Enough about the story, what about about casting? For years Marvel fans have clamored for one man to inhibit the astral plane as Doctor Strange, and that is Viggo Mortensen.  In fact at one point Mortensen was even linked to the role of Doctor Strange in Thor the Dark world, but Marvel quickly dispelled that rumor.  Marvel execs told collider last year that they would love to work with Mortensen, but nothing was in the works.As much as I would love to see Viggo wield the eye of agamotto, it probably isn't happening. The role of Doctor Strange just doesn't seem like one that the Oscar nominated Mortensen would be interested in.  At this point as far as casting is concerned fan's will just have to hope Marvel lives up to it's current reputation of casting the right person in the role of their most beloved heroes.

If Disney/Marvel Studios current track record is any indication no matter what direction they decide to go with a Doctor Strange film, and his characters place inside their cinematic universe.  Comic and film fans can rest assured that the studio will give the Doctor Strange character the type of film treatment he deserves.  The question remains will we feel this same way entering phase 3 of the Marvel cinematic universe?