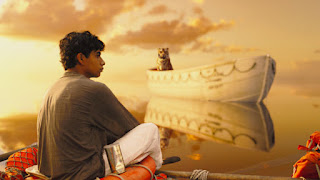 When I first saw the trailer for Life of Pi while it looked visually stunning I didn't know if it was a film I had to see.  Then once the Academy Awards Best Picture nominations came out and Ang Lee's Life of Pi made that list of nominees I figured I better check it out while I still could in theaters.  I was severely wrong when I thought Life of Pi wasn't for me,  because truth be told it is a film for everyone.  The stunning and fantastical images and characters are sure to capture the imagination of both children and adults, and in this case are only enhanced by Lee's masterful use of 3D.  However at its core Life of Pi  does so much more, which is to provide a thought provoking commentary on not just religion but more importantly faith in general regardless of whether you are an Atheist or the most devout follower.