TV Review: Fox's The Following Pilot (Confirmed: EPIC, 5 out of 5) 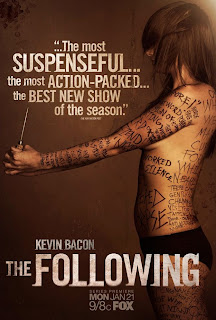 At the end of Fox's pilot episode of The Following serial killer Joe Carroll (Mark Purefoy) told Ryan Hardy (Kevin Bacon) this will be our masterpiece.  Well I don't know about that, but if the pilot is any indication The Following may be Fox's masterpiece.

I honestly can say that I can't recall a time when a pilot episode of a television series has kept me on the edge of my seat for the entire episode, simply because typically in pilots you just tune in to check out a shows premise, learn about the characters, and at the end of the episode decide if you want to tune in for a second week.  Their is no need to be on the edge of your seat, because you don't know who any of the characters are, let alone do you have any any emotional attachment to them.  Well The Following was the exception to that rule.

Kevin Bacon's initial performance as former FBI agent Ryan Hardy really lets you into his tortured soul.  On the opposite end of the spectrum Purefoy's portrayal of famed serial killer Joe Carroll is absolutely brilliant, and his presence is able to make you feel the uneasiness of his victims as well as the power he wields over people.  It has always been my experience from history to film to literature that people who can get their followers to be so devoted to their cause that they are willing to give their life at the drop of a hat to ensure or further that cause are always most disturbing figures of all, and Purefoy as Carroll is just able to personify that type of figure in multiple scenes.  This ideal also sets up the unconventional narrative of the very Charles Manson like story that seems likely to evolve out of the power Carroll holds over his followers.  Although we don't uncover the complete depth of their initial meetings, both Bacon and Purefoy's performances make their dynamic so interesting that it is sure to keep viewers coming back for more.

In a day and age when network television dramas have been a little lackluster (CBS's Person of Interest aside) , and the drama genre is dominated by premium channels and their hits.   Such as: Showtime's Homeland, and AMC's  line up of TV gold in the form of Mad Men, Breaking Bad, and The Walking Dead, it is truly refreshing to see such a psychological thriller debut on network TV!