Where the Amazing Spider-man 2 stands after the Rhino announcment. 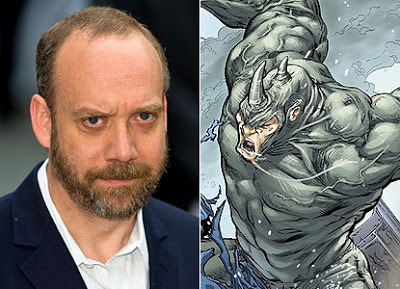 Spidey fans as well as fans of the Superhero Genre were shocked when THR broke the news yesterday that Paul Giamatti had been cast to play Spidey’s brute of a nemesis the Rhino in Marc Webb's upcoming The Amazing Spider-man 2.  The news came as a bit of a surprise for a couple of reasons.  First of all Paul Gimatti while a brilliant actor just doesn’t seem to fit the role of the rhino, while the Rhino is a favorite baddie of Spidey fans he isn’t necessarily the toughest adversary Spider-man goes up against.  While he poses a physical challenge he is often outsmarted within an issue or so.  Secondly The Amazing Spider-man 2 has already cast academy award winner Jamie Foxx in the role of Electro.  If history tell us anything about Superhero film especially 2007’s Spider-man 3, unless Christopher Nolan is directing Multiple Villains are probably a bad Idea.  There were some Amazing articles written around the web yesterday on Paul Giamatti’s casting as the Rhino, so that isn’t what we well dwell on here at the Epic Review.  Instead taking into account yesterday’s casting news  we will try to examine just where this sequel stands nearly 2 years before it’s anticipated May 2, 2014 release date.

When looking for the potential problems that Spidey 2 may have you first have to look back at its predecessor. Now I have to admit, even being the Spidey fan boy I am, I didn’t like the Amazing Spider-man nearly as much as most critics did.  Honestly to me the film got three things right: 1.Spidey's smart ass persona, 2. Gwen Stacey, and 3. the Web Shooters.  The rest I could nitpick, but this isn’t a review of the Amazing Spider-man.  So let’s look at the things the original film hinted at but failed to deliver on, such as the Daily Bugle.  While it was mentioned as a TV station there was never a single mention of the Bugles Editor and Chief J. Jonah Jameson, as a Spider-man fan just saying at some point Marc Webb may want to introduce one of the most important figures in Spidey lore, and soon! Also let’s not forget about Spidey's greatest adversary of all  Norman Osborn whose importance is hinted at, at nauseam in the original despite the fact he never made an appearance.  When it comes to recasting William Dafoe and J.K Simons I actually feel bad for Webb.  J. Jonah Jameson and Norman Osborn are two major elements in Spidey’s life Webb neglected to address in the Amazing Spider-man and now must deal with in future installments.

Now on to the problems that await the sequel itself.  For one Webb will be introducing both Mary Jane Watson and Harry Osborn, being played by Shaleene Woodley and Dane Dehaan of Chronicle fame.  While I am a fan of the casting, that still doesn’t solve Webb’s problem of character overload, and you would think the fact that Harry Osborn is in the film would confirm suspicions that Norman Osborn will actually show up this go around.  How in the World is Webb supposed to develop all these new characters while continuing to develop those of Peter Parker, Gwen Stacey, and Aunt May?  It just doesn’t seem possible.  One has to wonder if Sony is starting to get involved in the story telling process the way they detrimentally did with Spider-man 3.

I hope all of my very early negative assumptions are wrong and Webb is able to craft a sequel rivaling Sam Rami’s Spider-man 2.  I do have my money on Webb creating one hell of a Love triangle between Peter, Gwen, and Mary Jane.  If Webb knows one thing it is romance! 500 days of summer was one of my favorite films of 2009, and if Webb got one aspect on The Amazing Spider-man nearly perfect it was the Peter and Gwen love story, which is probably the most important love story in the history of comics.  Regardless of the outcome I will be there along with millions of other Web Heads routing Spidey on, come 12:01 a.m. on  May 2nd 2012 hoping for the next great Superhero film!
﻿
Posted by The Epic Review at 7:07 PM