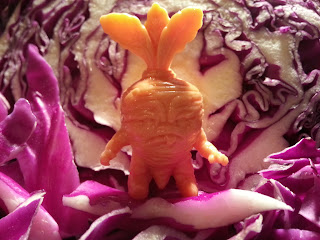 October Toys has really gained a lot of attention over the past couple of years due to their excellent O.M.F.G. (Outlandish Mini Figure Guy) line, a loving tribute to the greatest mini figure line of them all, M.U.S.C.L.E.  While not an O.M.F.G. release, Baby Deadbeet is a cool PVC designed by Scott Tolleson and sculpted by George Gaspar that will fit in well with nearly any other mini figure line.  Standing 1.5 inches tall and available for only $2, Baby Deadbeet is a fun little toy that I've enjoyed playing with and photographing.  More after the break... 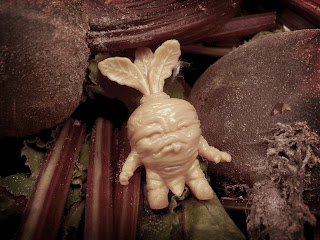 To quote Geraldine from The Flip Wilson Show, "What you see is what you get!"  There isn't too much to say about a single mini figure, although that doesn't mean that Baby Deadbeet isn't a cool guy.  First of all, his body is shaped like and he's covered with the various wrinkles and indentations that you would expect to find on your garden variety vegetable.  He has three leafy stems growing out of the top of his head which makes up about 1/3 of his height.  Oh, and he also has arms and legs so that he can get around.  They match the texture of the rest of his beety body. 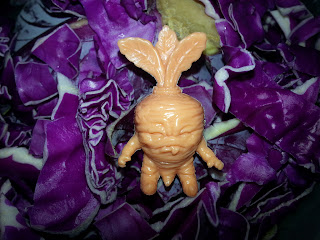 Of course this isn't just an action figure of a regular beet--he also has some fun facial features that make him a lovingly awkward and adorable character: his eyes are quite small and narrow while his folds even come together to give him a furrowed brow.  He doesn't have a nose but he does have a frowning mouth.  His tongue is comically hanging out in a very sour manner. Does that mean he is a pickled beet?  (*Groan*-Editor.)  Take a look above his brow, also. He's even got a little bandage up there holding together what looks like a tear in his...head? body?  I'm not really sure what to call it, but it is a neat little feature.
The Baby Deadbeet isn't painted at all, but is cast in a pinkish colored plastic that matches most the OMFG "flesh" releases, but October Toys has released Baby Deadbeet in some other colors as well (I think metallic green is still available as of this writing) and we may see more different colors to come.  He's a neat little guy that perfectly emphasizes why so many people love mini figures--he's fun, inexpensive, and just plain bizarre.  Whether he joins the ranks of your other mini figures, sits on your shelf watching you, or simply acts as a bit of garnish for your desk, there's really nothing to dislike about this little guy. Except that he is apparently a deadbeat.  If you're interested, pick him up at October Toys. 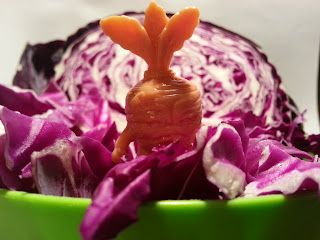 When it comes to beets, the only thing Barbecue17 likes better than toys based off of them is eggs pickled in them.  Purple pickled eggs are the best.  When not enjoying those delicious treats, Barbecue17 writes toy reviews on Amazon and posts action figure pictures to his Flickr account.