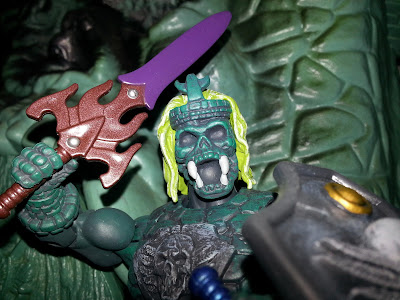 Head over to Castle Grayskullman.com and download the first issue in what is sure to be an excellent three part comic series focusing on the mysterious Castle Grayskullman.  It's a great read and a true labor of love that Masters of the Universe fans should enjoy. Plus, it's free!  Do I need to say more?  Check it out!
More info after the break.......


Since Castle Grayskullman was released in November of 2012, character creator Daniel Benedict has went full out in promoting his exceptional addition to the MOTU mythos by creating Castle Graykullman.com, a website where you can watch some hilarious vintage styled commercials for the character and now download for FREE the first part of an exceptionally cool mini-comic.  The mini-comic fits in well with the Masters of the Universe Classics canon that has been established through the bios on the backs of the card backs and in the three mini comics released last year with Thunder Punch He-Man, Snake Man-at-Arms, and Dragon Blaster Skeletor.  The art (pencils done by Daniel himself) really harkens back to the look of the earliest vintage mini-comics while style reflecting the style and tone of the MOTUC action figures. Man-E-Thanks to Daniel and the great team he assembled for continuing to add to the rich tapestry of mythology that makes Masters of the Universe so special!

If you're unfamiliar with this character here's what you need to know: last year was the 30th anniversary of Masters of the Universe, the popular action figure and entertainment property from Mattel.. To help celebrate the anniversary, Mattel decided to release the 30th Anniversary Line, a subscription line of 6 (mostly new) action figures that were intended to celebrate the property's past and future.  While half of the figures were created by Mattel creators and the Four Horsemen themselves, one of the remaining figures was selected through a character creation contest.  The winner was MOTU fan Daniel Benedict whose "Castle Grayskullman" was not only my favorite figure of the 30th Anniversary line, but also my 2nd favorite MOTUC figure of last year.  A golem like creature of sorts, Castle Grayskullman is the living embodiment of his namesake Castle Grayskull, the ancient fortress of mystery and power that was such an iconic play set for children of the 80's.  For further details about the history behind Castle Grayskullman and the Masters of the Universe Create a Character Contest,check out Castle Grayskullman.com