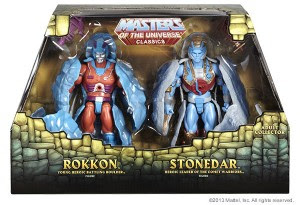 Here they are! Mattycollector.com just posted these a short while ago. While many fans have speculated that these guys would be the Masters of the Universe Classics exclusives for SDCC this year, it's nice to finally have official confirmation.  No word yet if their will be a packaging difference between figures sold directly as SDCC and those sold on Mattycollector after the convention, so hopefully we'll hear something soon.  While I'm not a huge fan of the Rock People, I am glad to get these guys; after we have them, we'll only have four heroic warriors in need of an update from the vintage line (Rio Blast, Extendar, Gwildor, and Rotar). More speculation, commentary, and pictures after the break..