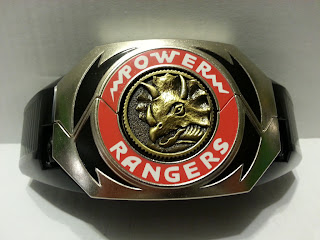 Like a celebrity marriage, my love affair with the Mighty Morphin Power Rangers was sudden, exciting, but ultimately didn't last too terribly long.  I remember getting into the series sometime in early 1994 (the show premiered in August 1993) and losing interest sometime in late 1995, right around the time I first saw Star Wars had to go attend a worldwide peace conference. While I have some extremely fond memories of the property (I actually got to see Power Rangers Live twice) I don't have the deep and abiding love for it like some fans do.  Epic Reviewers  Brad and Andrew are a bit younger than me and seem to have kept up with the show over the years throughout all of it's multiple incarnations, while I pretty much left when Trini left things started changing every week.  Still, when I found out that Bandai was releasing the Legacy Power Morpher, I knew I had to jump on it. The Power Morpher is a very cool and iconic prop from the early 90's, and since the original toy was a favorite of mine, I decided I needed to own this one.  (I also wanted to make Brad jealous.)  Currently it's a Toys R' Us Exclusive and retails for around $59.99. Check out the review/FAQ after the break......

How does the Power Morpher Come Packaged?

Actually, it didn't. It was given to me by Alpha 5 after Zordon sent him out to find some dude in his late 20's with attitude. When you pick yours up, however, it comes in this box (see picture below) that features display windows so you can see the Power Morpher and all of the coins.


What's it made out of?
Diecast metal and plastic.  The silver part on the front and the handle are made of metal. It's a really heavy duty piece and weighs about 1/2 a pound.  Seriously, you could melee a Putty with it.  The back of the Power Morpher and the translucent red interior are made of a very thick, heavy plastic. This is definitely a good quality piece and doesn't feel cheap in the least. It feels like an actual prop Morpher rather than a toy.


Does it actually work?
You mean like will it really turn you into a Power Ranger? No, it will not.

No, I mean does it have lights and sound and such?
Oh, sorry. Yes, it absolutely does.  Check out this little video Arathaelia and I shot:

It has a power switch and when you flip the switch to the "on" position, it plays the little communicator diddy (Beep beep be boop be boop).  On the left side of the handle is the button to activate the Morpher. Press it and the top and bottom halves of the Morpher separate, revealing the translucent red interior and playing some kind of noise that sounds like glass breaking. One of the four lights on the interior also flashes. Hold the button down longer and it will actually play the entire Power Rangers theme song (music only, no words) with the lights flashing in time to the music.  This would be great to have at a rave.

How does it look?

From what I can tell, the Legacy Power Morpher does an exceptional job of replicating it's on screen counterpart.  The "Power Rangers" emblem and the black flares on the front are not decals.  They actually seem to either be painted or or some type of enamel.  The metal front and sides are all really smooth with a dull shine.  On the back, there's a really cool gold emblem that looks like either a very stylized "Z" or perhaps an hour glass. I don't recognize it and couldn't find any info about it, but it is surrounded by gold vines and two red dots.  The bottom rear edge of the Morpher and top rear edge (which folds down to become the handle) each have a sticker that features the ranger colors.


What are are the coins like?
The coins are metal and feature reliefs of the dinosaurs on the front (Mastodon, Pterodactyl, Triceratops, Sabretooth Tiger, and Tyrannosaurus) and the Mighty Morphin Power Rangers logo on the back.  The images feature a really heavy dark wash, so they're not bright gold as depicted on the packaging.  There's also reeding around the edge and the coin simply fits into an indentation in the Morpher. It's removed by pushing a panel on the Morpher's back.


Why isn't there a Dragon coin?
Good question. The simplest guess would be either A) Bandai is replicating the original morpher from the 90's which did not come with the Dragon coin or B) Bandai plans to release the Dragon coin along with another Legacy item in the future.  Of course, it could also be due to the fact that the Green Ranger's morpher was different from the standard morpher in that it was more gold in color, so that coin clearly would be incorrect if included here.

What's the deal with the belt buckle attachment?
The set does come with a hard plastic belt buckle that can attach to a belt (preferably one with no other buckles) and holds the Morpher safely inside.  The Morpher snaps in easily and is very secure. I tried to shake the Morpher out, but was unable to, which is a good thing for fans who either want to use this for cosplay or wear it out on the town to proclaim their love for the Power Rangers. 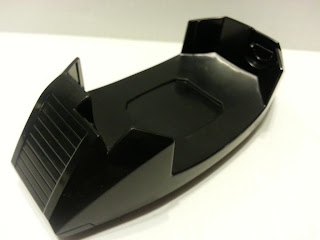 Did you find any flaws or problems with it?
Only one, and it's a problem that the original Morpher doesn't have. On the Legacy Power Morpher, the rear handle handle feels like it's set set too low for the user to slip their hand in and push the Morpher button.  I actually have an easier time activating holding and activating the button on the original toy. Maybe I just need to practice more?  I guess that I'd also recommend being careful with the clips for the belt buckle. They're a very solid plastic, but they feel like they could potentially be brittle.


What are your overall thoughts on this piece?
I'll reiterate what I said above. I'm not a lifelong Power Rangers fan by any means, but the first year or two of the series still hold a great deal of nostalgia for me.  I hadn't planned on buying anything Power Rangers ever again, but when I learned about this item, I decided that it was a perfect piece for my collection. I'm confirming it as a Great and a 1/2. If the handle had been positioned a little better, I'd easily give this an Epic, but as it is, it's a tad hard to properly use in a comfortable way.  It's also a little on the expensive side, but that's not really affecting my score. I think this can safely be recommended to any fan of the original Power Rangers who appreciates prop replicas and pop culture collectibles, as it's clear Bandai put a lot of thought and quality into this item.


Barbecue17 has two favorite Power Rangers villains: Bones and Finster.  If you have them, please send them to him! He'll gladly take pictures and put them on his Flickr account.