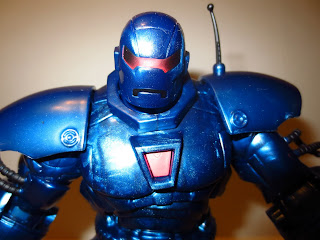 I love Build-a-figures, and it was solely my desire to own this Iron Monger that led me to start picking up the Iron Man 3 series of Marvel Legends.  I definitely enjoy action figures of Iron Man (armored characters are always fun) but so far this series has been pretty hit or miss for me.  I really like Iron Patriot and Heroic Age Iron Man, didn't care for Ultron, and am just OK with classic Iron Man.  I haven't spent much time with the Mark 42 and Rhodes' Iron Patriot armor, as Brad bought those figures and just gave me the pieces. The build a figure was what I really wanted, though. I loved the Iron Man Iron Monger and keep the 1/18th Iron Man 2 on my desk at work, and this one just seemed like a lot of fun.  I also thought he might make a pretty decent stand in for the Castle Grayskull armor to stand alongside my Masters of the Universe Classics (it was a cardboard piece that appeared in the original vintage Masters of the Universe Castle Grayskull). While I haven't reviewed all of the figures in the series yet, I'll go ahead and jump the gun with a review of Iron Monger after the break..... 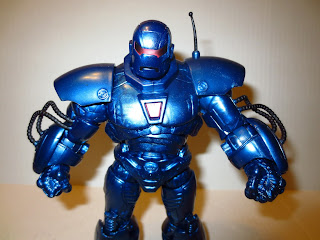 Iron Monger stands just a little under 8 inches tall and is quite a chunky figure, nicely replicating the look of the character.  He's based off of the comic Iron Monger Mark 1 and will nicely fit in with the rest of your comic based Marvel Legends.  He was relatively easy to assemble, and his parts stay together securely once assembled. 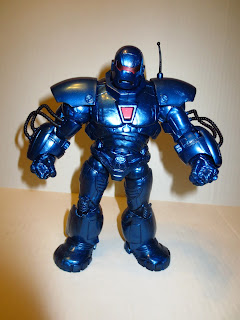 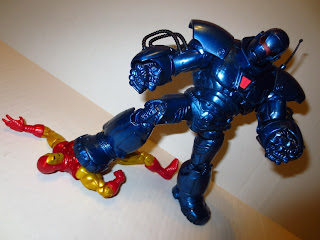 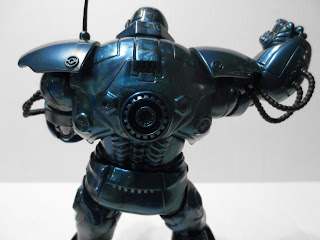 I really like the look of Iron Monger. This appears to be the look of Obadiah Stane's first incarnation of the armor from 1985, just with a few more minor details thrown in.  Rather than the banded armor that many of the figures in this series have, Iron Monger looks like he mostly has overlapping armored plates.  He has lots of details on him such as various turbines and exhaust ports on his back, pistons, and even a cool antenna on his left shoulder--remember, Stane could operate this armor via remote control.  Other significant elements from the comic design, such as the raised "collar" around the neck, the shoulder pads, and the gauntlets that extend just a  bit over the hands, are all captured here nicely. 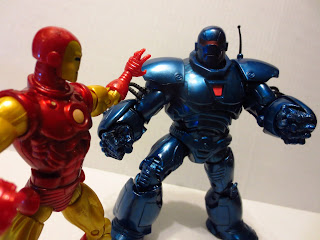 There is very little paint on Iron Monger. He's completely molded from a blue plastic that's supposed to have a metallic look to it, but instead has a weird swirly shine.  The plastic's kind of glittery but gives off these uneven swirls that break up the colors.  I'm sure this type of plastic would look great on certain figures, but it's looked terrible on most of the Iron Man figures. Sorry, metal just rarely has that look to it. The wires on his arms, his mouth, and his antenna are all painted black. The chest reactor is a flat red, although mine has a paint bubble in it. Ugh.  I do like the visor, however.  It's a mixture of red and black that gives the visor a smokey, translucent look.  The figure looks OK, but I do hate that silly swirly plastic and I hope Hasbro stops using it.  Their past Iron Man figures have all looked excellent, so it's not like I'm asking them to do something new.

Iron Monger doesn't come with any accessories, although technically he is an accessory himself since a part of his body came with each figure in the line.  You'll need Classic Iron Man, Heroic Age Iron Man, Iron Patriot, Ultron, Lt. Col. James Rhodes, and Iron Man Mk. 42 in order to complete him. 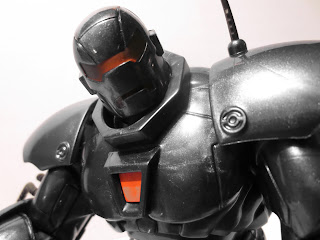 Now that I have him completed, I'm really happy with Iron Monger.  He's a nice, solid toy and a decent collector's figure. While I wish the blue plastic were a bit different and perhaps featured some weathering or something, overall I'm quite pleased. He's fun to play with, looks great in a multitude of poses, and seems to be a very versatile figure.  If you're interested in him or want the rest of the figure's in the series, he's definitely worth picking up.  I'll confirm him Great and a 1/2 overall. 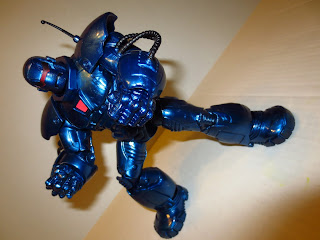 I've reviewed a few other figures in this series, and plan on reviewing the rest. So far, I've reviewed Ultron, Iron Patriot, and Classic Iron Man.  If you're interested in building the Iron Monger, click on the Big Bad Toy Store banner at the top of the page. They have most of them in stock for some pretty good prices.

Good. Bad. Barbecue17's the guy with the action figures.  Check out more of his work on Flickr.