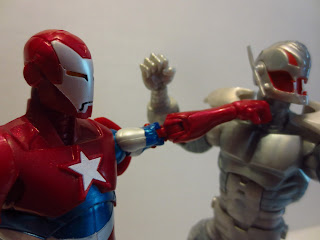 In many of their movie based Marvel lines, Hasbro has gotten into the habit of releasing action figures from both the film and the comic version of the film property in question.  As part of their Iron Man 3 Marvel Legends sub-line, Hasbro is continuing the trend with both film and comic versions of the Iron Patriot armor. While in the film the armor is essentially the War Machine armor with a new paint job, piloted by Lt. Col. James Rhodes, the comic version of the armor that I'm reviewing today was worn by Norman Osborn during Dark Reign, which saw Osborn leading the Dark Avengers.  It's a pretty cool armor and ensures that first wave of Iron Man 3 figures has a villain to fight, although I doubt the kiddies pulling this guy off the shelf will know that. But you will, collectors and comic book enthusiasts. Anyways, let's get this party started after the break....


Iron Patriot comes in at just a little under 6 1/2 inches, meaning that he should fit right in with the rest of your Marvel Legends, although he may be a tad on the short side.  He's a very glossy and attractive figure and is tons of fun to fiddle around with.  He looks decent next to Mattel's DC figures, although he certainly looks thin compared to them. 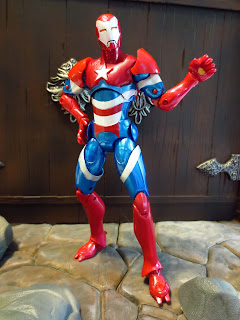 Iron Patriot's articulation seems a little different than other Marvel Legends figures (it's different than Ultron) but I definitely prefer it.  He has: ball jointed ankles, double hinged knees, swivel thighs, ball jointed hips, a ball jointed mid torso, hinged shoulder pads, ball jointed shoulders, swivel biceps, double hinged elbows, ball jointed wrists, a hinged neck, and a ball jointed head.  He's incredibly well articulated, and every joint is nice and tight and gives the figure an excellent range of movement.  I'm especially happy with the hips here, as the thigh swivel is lower than on your standard Marvel Legends figure; I find it much easier to pose him.  The wrists, feet, mid torso, and neck all give the figure a great range of motion for any battle or flying pose, something vital to any good Iron Man figure.  A good deal of the articulation is well hidden and the only joint impeded is the hips, which are hampered somewhat by the disks that hang down on Iron patriot's sides.

A large portion of this figure is simply a repaint of the Extremis Iron Man from the first series of the new Marvel Legends line (the Terrax series).  There are definitely some differences, though: the hands are in different poses (and easily removable) and the upper torso has the star shaped beam rather than the triangular reactor from the Extremis armor.  The suit looks very high tech and balances lots of smooth, flat surfaces with the more articulated armor bands on the torso.  He also has those little disks on the sides of his thighs which I don't remember the Iron Patriot armor having.  He looks really nice and sleek, and with his hands in two different poses (an open handed repulsor blast and a fist) you'll have plenty to do with him.  I mentioned that the hands are easily removable but since the head is on a true ball joint, it's removable as well. Feel free to do some LBCs (lazy boy customs--editor's note) with your new Iron Man toys! 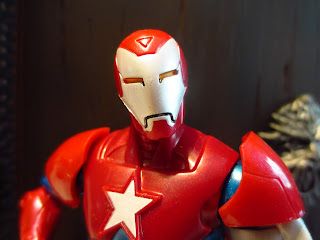 From a distance, the paint work is really good.  It's only when you get closer that you'll notice a few flaws. While various parts of the body are molded in shiny red and blue plastic, there are still multiple painted details such as the red and whitish silver stripes that give the Iron patriot his name.  Most of the paintwork is nice and clean; the details on the helmet are clean and crisp, the stripes on the chest are pretty straight and even, and details like the star on his chest and the repulsors on his palms are applied well.  The biggest issue I have found is that the silver paint is often too light to fully cover the red underneath.  Edges of silver-painted areas often have a slight pinkish tint to them.  Also, the silver stripe on Iron Patriot's right thigh is a bit messy and crooked. Hopefully, it's just a one off error. I will say that I like the metallic looking plastic Iron Patriot is molded in much better than I liked the plastic Ultron was molded in. I've noticed far fewer of those little swirlies in the plastic that drive me crazy. 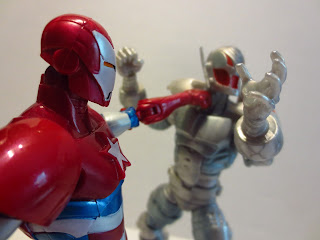 While Iron Patriot has no accessories, he does come with a piece of the series' "Build-a-Figure" Iron Monger.  Iron Patriot comes with the torso, which is quite a large piece.  I'll certainly review Iron Monger once I fully complete him, but I will say that while I like the metallic blue paint, I'm not thrilled about the swirls I can see in the plastic. They aren't as noticeable as on the head (included with Ultron) but they're still a bit distracting. The body is quite large, however, and is nice and chunky.  If you're interested in the BAF piece, this is a great extra. If not, you'll have a random BAF piece laying around for dioramas, or to sell. 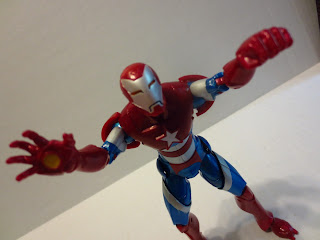 When I first grabbed Ultron and decided I wanted to begin attempting to collect the series and build Iron Monger, I was excited.  Ultron took a little bit of the juice out of my arc reactor, as I really didn't care for the figure that much.  Iron Patriot I like.  The articulation is nearly flawless, the hands are expressive (I love posing him with the hand out while making repulsor blast noises), and the paint and plastic look very good, especially for a mass market release.  While I gave Ultron only an Eh and a 1/2, I can easily confirm Iron Patriot as Great.  He's a really well made toy.  If you're interested, snag him. You shouldn't be disappointed.
You can check out my review of the Iron Man 3 Ultron here. Click on out Big Bad Toy Store banner above and you can order this or any other Iron Man 3 figures from their store!

Barbecue17 would totally enjoy a film that starred a Vin Diesel voiced robot learning how to love while helping Mel Gibson fight the British.  It would be called the Iron Patriot, of course!  For less bad jokes and more pictures, check out Barbecue17's Flickr account.