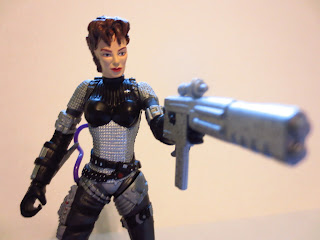 In 1997, Spawn was all the rage.  McFarlane toys was really coming into its own--not just among toy fans, but as a part of pop culture.  Perhaps the zenith of Spawn's popularity was in August of 1997 when the motion picture Spawn hit theaters. I vividly remember going to the theater with my dad to see the movie and learning that the film had arrived late, so we had to go back for a later showing. I also remember enjoying the film, but it's been years since I've watched it. I might have to fix that, since I remember being impressed by elements of the film, such as John Leguizamo's interpretation of the Clown.  I also vividly remember the excitement about the toys. Compared to most movie toys of the day, the likenesses and details on these figures were downright uncanny.  We had seen McFarlane tackle comics, but this is the first time they immortalized something from film into plastic.  As cool as this line was, I only ever owned two figures.  For a birthday gift from a friend, I remember getting Spawn. The next day, I took some birthday money and went out to pick up Jason Wynn. The figures still stand on my shelf, Spawn with a group of other film versions of comic characters and Jason Wynn with my Metal Gear Solid figures, as he fit in there perfectly.  Last week at Heroes Con in Charlotte, I found Jessica Priest for $3, and couldn't pass her up. Played by Melinda Clarke, Jessica Priest was Jason Wynn's top assassin, who killed Al Simmons in the film (in the comics it was Chapel from Rob Liefeld's Youngblood.  I'm actually thinking about finishing this line up at some point in the future, as I imagine I can pick them up pretty cheap. Is worth going back for? Let's check it out after the break.... 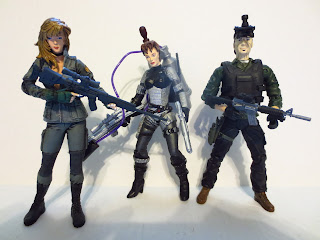 Jessica Priest stands a little under 6 inches tall, which puts her in line with most McFarlane figures from the mid to late 90s. McFarlane's figures got larger over time. In fact, while I'll probably end up putting her with the Metal Gear Solid figures from McFarlane, she's shorter than those figures, too, and they came out in early 1999.  She looks OK with Plan B's Special Forces figures, as well (which I also put with my Metal Gear Solid figures). 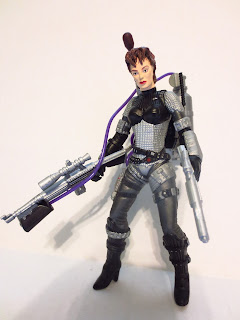 Her articulation shows both her age, and the fact that this is a McFarlane figure. It's actually a bit disappointing, because my Spawn and Jason Wynn figures both have more articulation than Jessica Priest. That's what you get for being a female figure in the 90's, I reckon.  She has swivel hips, swivel shoulders, upper elbow swivels, and a swivel neck.  Everything works pretty well, except for the swivel on her right elbow. Turning it feels more like I'm twisting the peg than turning a joint, so I'm just going to leave it alone.  The paint or plastic has probably gotten stuck, since this figure has likely been sitting in some scalper's basement since 1997 when he bought it with the intention of paying off a house by reselling it in the future. Seriously, people did stuff like that back then. Isn't it funny when you go to toy shows and find all the "rare" figures from the 90's for less than $5 bucks a pop? 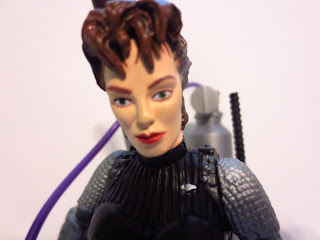 Let's start with the weakness of the sculpt first.  While the head was pretty impressive back in '97, it certainly wouldn't be considered a hyper realistic likeness of Melinda Clarke by today's standards.  The forehead and hair seem a bit off.  The rest of the sculpt, however, is covered with the ultra detail that McFarlane was known for.  Every bit of this figure is covered with cool details, so I'm going to pick out my favorites. First, the grid pattern of the silver body armor Priest wears is cool and stands out.  Second, I love the armored gauntlets she sports. They're complete with some wicked arm blades that must make CQB pretty rough.  Third, not only is she wearing knee-high leather boots, but they're nicely armored on the front.  Fourth, she's rocking some kind of cool device on her hip that attaches to a similar device on her back via a purple cord.  The device on her back looks like some kind of high tech back brace that helps her to carry the giant backpack she wears (it has a kidney strap, just like on a military style backpack frame).  The device on her right thigh looks like it could potentially hold something, but I have no idea what could go there.  Last, just pay attention to all of the crazy straps and pouches on her arms, legs, and waist. Priest wears two belts, because this was the 90's, baby. People did stuff like that. This all goes to say that the sculpt is still quite good. I'm always impressed by the dozens of little details McFarlane put on every figure, as it makes looking at the figure sort of like an Easter egg hunt. 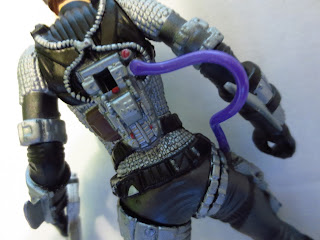 While a lot of McFarlane figures (particularly monsters and such) used the paint scheme of multiple coats of different colored paint to give the figures a certain look, Priest eschews that for a neat and clean paint job.  Multiple details are all painted with extreme precision.  While her body suit uses a flat black, her boots and armored chest plate use a glossier black.  The paint work on the face is neat and clean. Minor details such as the belt buckles, individual wires, and the spaces between the plates on her armored right wrist guard are not neglected. I think one of the biggest compliments I could ever say about McFarlane toys is that they never cheaped out
when it came to the details on their figures. I wish more modern toy companies thought like they did. 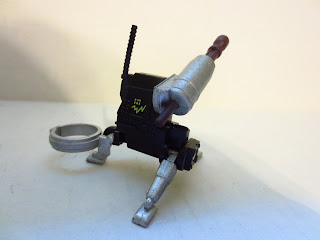 McFarlane figures typically came with a wealth of cool accessories, and Jessica Priest doesn't disappoint.  Her primary weapon is a really nicely sculpted assault rifle with an attached scope and a device that sprays liquid. As best as I can remember, in the movie she kills Al Simmons by dousing him with a flammable liquid and then lighting him on fire. Am I right?  Anyways, the sprayer is attached to a squeezable tank via a purple hose. You fill the tank with water, and squeezing it shoots the water out of the sprayer. Pretty cool, right? Honestly, if I had bought this toy when I was younger, I probably would have removed the tube and just used the rifle. 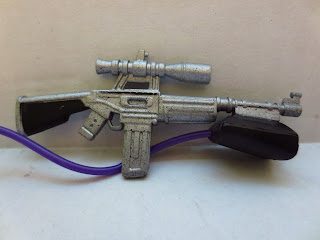 It's a very cool assault rifle, and cast in a nice metallic silver with plenty of flat black paint apps. The rifle easily fits in Priest's right hand. Secondly, she comes with a smaller sub-machine gun that fits in her left hand. It's the same sub-machine that comes with Spawn. I like it. It has a huge clip and looks really spartan in it's style.  Lastly, Priest comes with a "communication station/missile launcher." The device has three legs that fold down and allow the device to stand flat on the ground. It has lots of sculpted buttons, a screen with some green waves of information, and what may be a satellite phone of some kind.  The launcher portion can rotate up and down to fire a small purple missile. When you're done, the legs fold up and the device fits snugly on Priest's back. Oh, and one of the legs has a storage loop for the water tank.  I'm still impressed by these accessories, even by today's standards. 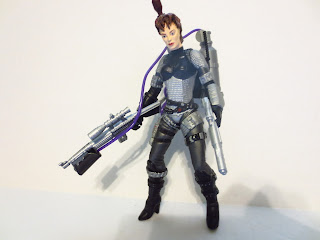 Actually, I'm still impressed by this toy, even by today's standards. While the likeness and articulation certainly show this as a product of the past, the details, accessories, and paint applications still hold their own.  Jessica Priest is a Great action figure. I just wish she had more articulation.  I would love for McFarlane to get back to it's former glory by releasing interesting, unique, and impressive toys. Their Walking Dead figures have been looking better lately, so I have hope that McFarlane will return in force. Until then, I think I'll be searching online for some 90's Spawn figures. I've got stuff to buy!

The only other action figure from McFarlane toys I've reviewed is Cortana from their Halo 4 line.  Brad reviewed the Black and White Michonne with Pet Walkers 3-pack from their Walking Dead line, as well. To compare Priest with some other figures from the late 90s, check out The Marine from Resaurus' Quake II line, Link, Ganondorf, and Princess Zelda from a Nintendo promotion, and The Shadow Balrog from Middle Earth Toys by Toy Vault.

Barbecue17 features Ultra Detail. Trust him. Check him out on his Flickr page.