Barbecue17's Mid Year Masters of the Universe Classics Review for 2013 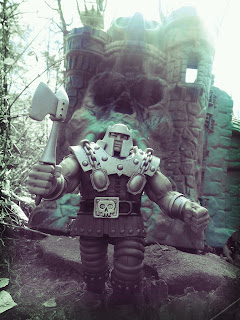 It's almost July, which means A) We're half way through the year and B) It's time to take a look at how Mattel's Masters of the Universe Classics line is doing.  While last fall we thought this year might never even occur due to low subscription numbers, 2013 has turned out to be a pretty solid year for MOTUC.  Not only have we had a robust line so far, but we've had the announcement of the Filmation sub-line (beginning next month) and the addition of the mysterious Spirit of Hordak figure that has popped up randomly on Mattycollector.com. Today, though, I'm going to be sharing my rankings of the figures released during the first six months of 2013, not including Strobo. Strobo is the traveling convention exclusive, and while he was made available very, very briefly to fans on Mattycollector, I don't have one yet, as most fans probably do not, either. The criteria I'm using in ranking these figures is simply an Excel document I've kept this year where I write down my pros and cons of each figure once I've received them.  As new figures come in, I move figures up and down on the list. I've done this with my MOTUC figures for the past few years and this list reflects a blending of my personal favorites with my somewhat critical views of each figure in and of itself. Ready for a countdown? It's after the break.... 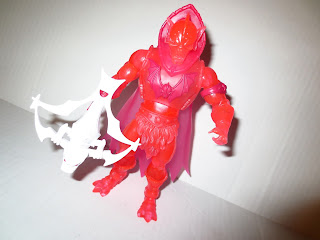 I didn't knock Hordak to the bottom of my list just because I thought Mattel's method of selling him randomly was stupid. I simply think he's just not the most exciting figure. I will say that so far this year, there haven't been any "bad" figures like in previous years, where I felt that QC issues or some other factor really killed a figure. Hordak is a great exclusive--he's a translucent red recast of Hordak. While he has the neat vintage crossbow included, it's just a repaint of an accessory we've seen twice before.  Some new accessory would have certainly been a welcome addition to "Kool-Aid" Hordak, though. 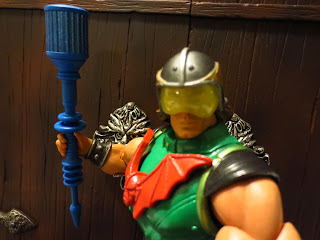 I like the Fighting Foe men as a concept. It was a neat way to take two unreleated concepts (one of the earliest names for Masters of the Universe and the Monogram vehicle drivers) and combine them into something cool. As a figure, though, I just think Dawg-O-Tor is pretty boring.  I like his Talon Fighter inspired accessories and his color scheme, but I still just can't help but feel like he's overly dull. He makes a good generic Eternian character, if that's any consolation.  He most certainly does not work as a Horde member, however. 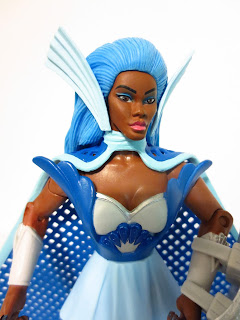 I really am a Princess of Power fan, and I was looking forward to Netossa. She has a beautiful head sculpt, excellent paint work, and fantastic quality control. Little details such as the various shades of blue used on her and her cool blue fingernails make this one of the best looking figures in the line to date.  She also includes no new accessories, unless you count her removable cape as one. It's really hard for me to get behind a figure that has nothing interesting to interact with, and that's my problem with her. She has a repainted shield that all of the POP ladies are getting, but that's it.  I gave her the trident from the DC Universe Classics Black Manta, and now I'm much happier with her. But she should have come with something else to use.  Maybe an accessory pack will rectify this someday. 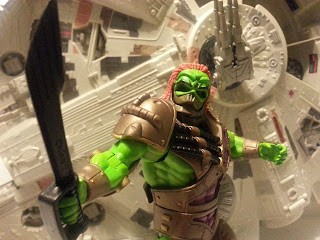 I was really looking forward to Karatti, as the New Adventures characters have been some of the best figures in the line to date. Karatti is a fine figure with a vibrant paint scheme and some really excellent armor. It's too bad that his weird left hand can't hold his sword properly, though.  It's also too bad that the accessories have no paint highlights.  He also reuses a lot of parts that have become fairly dull at this point. If you stand him up next to his fellow Evil Space Mutants, he shares so many parts with Optikk that they somewhat blend together. 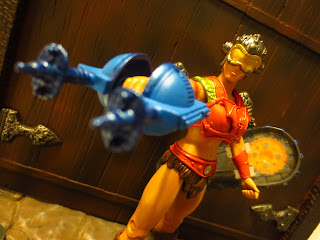 An interesting addition to the line, and one of the Fighting Foe Men figures, Sherrilyn has a unique mixture of barbarian fantasy and technology in her design. I love her Attak Trak themed weapons, too. I only wish her helmet was removable, as it'd be nice to have more unique female head sculpts in the line.  The double barreled blaster is incredibly cool. Unlike Dawg-O-Tor, I think Sherrilyn works as both an individual character and a Horde member. 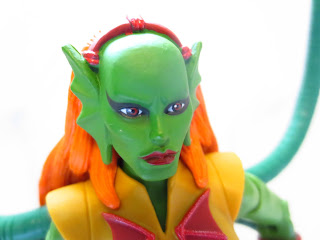 Octavia is an excellent figure. Featuring a design that really stands out, and some great accessories, Octavia is an excellent addition to the Horde ranks and the Filmation roster. Her ankles are a bit loose, though, so you'll have to prop her up.  The tentacles on her back are also a bit difficult to maneuver, but once you get them how you want them, you can really begin to enjoy the figure. Personally, I like the triangle shaped skirt piece better than creating a unitard, but I seem to be in the minority on that one. 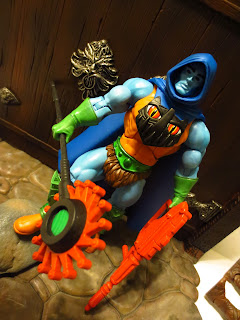 In some ways, Ditztroyer is a pretty dull figure. He's basically the standard MOTUC body with He-Ro's boots. Factor in his cloak and cool Roton themed weapons, however, and you get a really cool mysterious new character who fits in perfectly with the classic MOTU aesthetic.  One of the Fighting Foe Men, Roton seems to me more like an Evil Warrior than a Horde member.  Of course, he also seems like a Filmation villain-of-the-week type of character.  The Roton staff is the best idea ever, and I love the laser rifle. If Mattel wanted to release a six figure sub of characters based on vehicles, I'd buy one. As long as we get the Land Shark, though. That's my stipulation. 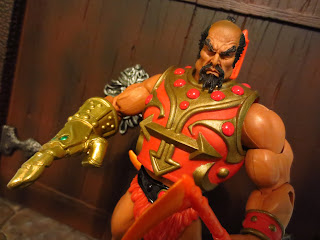 This guy is just cool all over the place.  Awesome head sculpt for lookin all mean (c'mon, detail is awesome!)? Check. Awesome armored karate  hand for choppin'? Check. Cool weapons with space on the back for storage? Triple check!  He's got a weird little mark on his forehead, but that's the only knock against this guy.  Perhaps someday I'll get a Nightstalker for him to ride, but until then he looks awesome just hanging around breaking cement blocks. 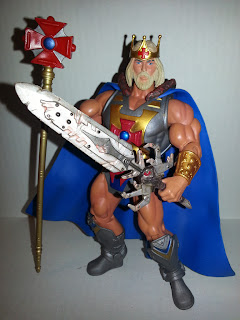 No other figure released this year has inspired me to write and photograph a dio story except for King He-Man. He's a figure that just seems so special and inspiring.  Like an action figure of Luke Skywalker as a Jedi Knight or Aragorn in his kingly garb, King He-Man represents our hero achieving the goal which he was destined to reach. I love this figure dearly. While I agree that the color scheme could have been better thought out, the accessories are amazing. I love the damaged Techno Power Sword, and the staff ain't bad, either. 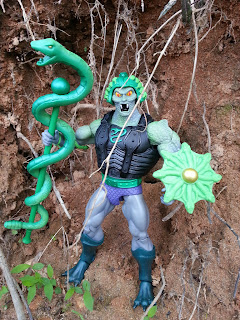 This figure really surprised the heck out of me with how awesome it turned out. I thought he'd be a mess with all of the extra parts and the armor that folks were saying was too large, but he turned out great.  Other than how wimpy his shield looks compared to the staction's, this guy is fantastic. He also has one of the best headsculpts (with or without the snakes) in the entire line. We've really bolstered the Snake Men ranks in the past year, and Snake Face might be the finest of the lot. 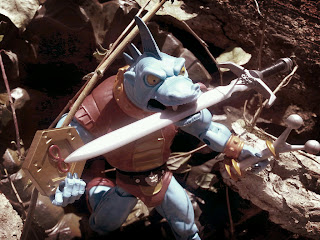 Fang Man was not a character I had any connection to prior to this figure's release. Watching the episodes he appears in, he's a perfectly forgettable character. This figure, though?  Amazing. Truly one of the best figures released so far this year.  Perfect paint, sculpting, and amazing accessories all blend together to create a figure that I wish every He-Fan and She-Raver could own.  This guy easily could have been my number one figure if it weren't for the love that I have for.... 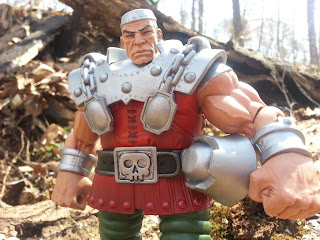 Ram-Man is on here both because I love the character and because he's a fantastic figure. It was a long wait to get this guy, and in many ways, it's probably thanks to Ram-Man that 2013 was a success. He's large and in charge. I love his head sculpt and how unique the entire figure feels.

Moving forward with what we've seen so far for the rest of 2013, I expect that Clamp Champ, Castaspella, Mantenna and Galactic Protector He-Man will register pretty highly on my list at the end of the year. There's still plenty of figures we don't know about yet from both the Club Eternia subscription and the Filmation subscription, so things could shift around.  Will someone dethrone Ram-Man?  Will Strobo be worth all the fuss? Will I finally get the Imp figure that I've always wanted? We'll find out later this year!