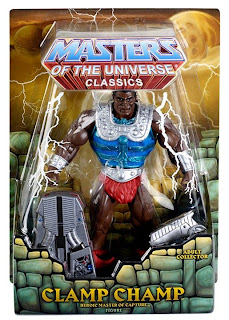 Mattel has just released this delightful little snippet of news regarding the next Masters of the Universe Classics figure:


Hey Matty and MOTUC fans!
Just  got in final package samples of July's Clamp Champ figure! Note that while this is a monthly figure, like Fang Man, Clamp Champ here will not have any "day of" stock for 2013. So the only way to get him in July is if you are a subscriber! (hey, Club Eternia has its benifits!)
We are all so pumped for SDCC right around the corner, but until then, here is a new packaged shot and bio to feed your MOTUC needs!
See you in San Diego!
Matty
PS: Don't forget the 2014 Club Eternia subscription is on sale now! More details at SDCC at our fan panel at 11:00 on Friday July 19th in rooom 25ABC.

So, yup. Mattel has now taken an original, vintage line character and made them exclusive to the subscription.  Oh, and the subscription window for next year's line is now open, FYI. Mattel's marketing push couldn't be more obvious unless they Gangstor over to your house to break you leg unless you buy a sub.  More thoughts and Clamp Champ's bio after the break.

So far, the only figure's exclusive to the sub have been the yearly exclusive figures (Wun-dar, Preternia Disguise He-Man, Shadow Weaver, and King He-Man) and March's Fang Man.  This, however, is the first figure from the vintage line that hasn't been available in some way to all buyers.  Don't get me wrong, I know Mattel needs to sell the subs in order to produce characters more casual fans could care less about (I'm not casual, by the way- I want most everyone) but to make one of the vintage figures exclusive just seems in bad taste. There's nothing anyone can do now except find a friend with multiple subs or purchase the figure from a secondary retailer. This really leads me to believe that next year's line is going to be subscription only and if you don't subscribe, no He-Man figures for you!

Here's a look at the back of Clamp Champ's card so you can read his bio: 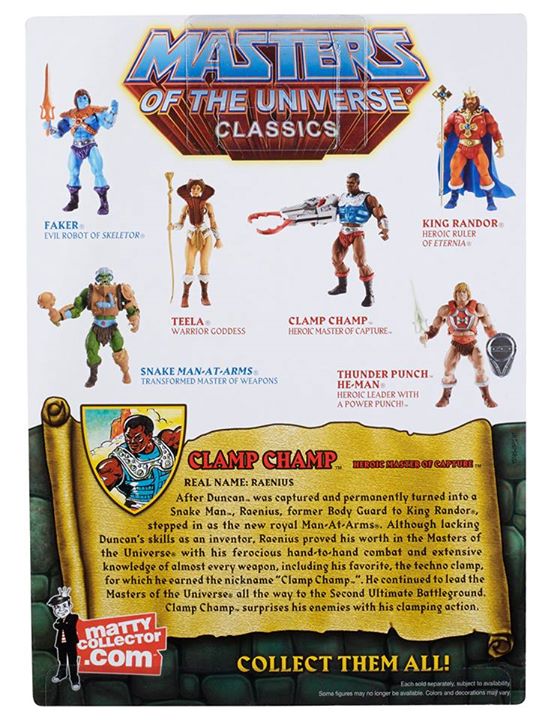 Not a bad biooverall and Raenius certainly isn't a bad "real name," but I wonder if it comes from anywhere? Clamp Champ was a figure I distinctly remember picking out at the store as a child and was always a major part of my main MOTU team, so I'm glad to see him being elevated to more significant role in the story.  For more discussion, feel free to comment here or check out the forums on He-Man.org.