A New Batgirl Review: Batgirl iPhone Case from Chara-Covers by Huckleberry (Confirmed: Great and a 1/2) 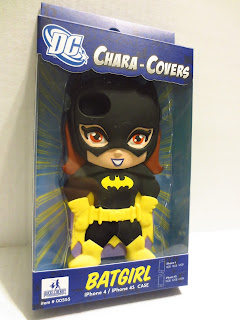 While browsing at a local purveyor of fine goods, I ran across a new piece of Batgirl merchandise that I didn't own: the Batgirl "Chara-Covers" iPhone case.  Chara-Covers is a new line of protective cases for the iPhone 4 and iPhone 4S that are shaped like various DC superheroes and villains. They're made of a hard plastic and seem to snap over the back of the phone to protect it from damage.  I remember seeing a Harley Quinn case, but I forgot who else I saw. Once I snagged Batgirl I was on my way to the register!  For full disclosure, let me state that I do not own an iPhone or any smart phone at all.  I simply bought this because it's a cool Batgirl product. It comes in a small window box so you can see the case easily.  Ready for a closer look?  Join me after the break..... 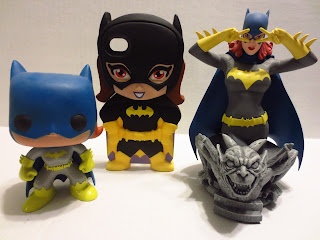 The case is almost 5 1/2 inches tall and just a hair under 3 inches wide at it's widest point.  It's made of two separate pieces that I assume make it easier to snap onto the phone (the head is the top of the case while the body is the bottom of the case).  I really like the style--it's not as super deformed as something like a Pop! Vinyl from Funko, but it doesn't look like a traditional American comic character, either. 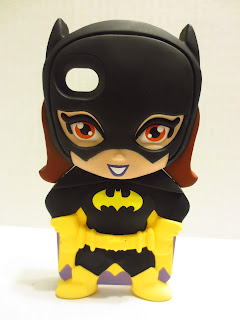 I really like the look of the case. It's a great Batgirl image that captures the very cool look of the character while also managing to be pretty cute.  While it's built on a flat base, the sculpt is very much a relief of Batgirl, so details such as her gauntlets, belt, and the details of her face are raised from the main body.  The bottom of her boots (the bottom of the case) are flat, so I assume she allows you to stand your phone up if you desired. 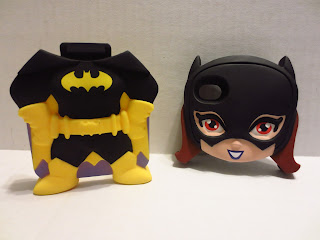 It appears that the bottom has an opening (maybe for the charger?), and there is a small opening on each foot. There's also a button on the left side of her head, an opening for the camera lens above her left eye, and another button and a hole to plug in something on the the top of her head.  I don't have a clue what the hole would be used for. Maybe an antenna?  The paint work is really nice. It's pretty clean and neatly applied, although remember that this is intended to be a functional item versus a collector's piece.  I love the way her eyes are handled and the purple lipstick she's wearing.  Even the bat symbol on her chest is neat and clean. 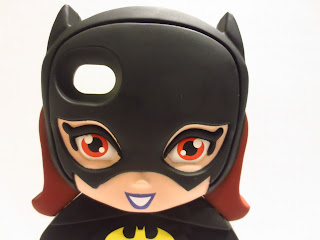 If I had an iPhone, I would absolutely have bought two of these cases: one to put in my Batgirl collection and one to protect my phone! Since I don't have an iPhone, I'll simply be happy with the one I have. If you're planning on grabbing a cell phone case for your iPhone 4 or iPhone 4S and want something really cool, this seems like it would be the way to go.  As a Batgirl fan, even though I don't own a phone to use it with, I still think it's incredibly cool.  It's really a great sculpt with nice detail. I have never heard of Huckleberry before, but they did a fantastic job with this. A lot of Batgirl products that come from non-collector focused companies tend to constantly use the same silver age art of Barbara  Gordon.  Now don't get me wrong, I love that version, but it's cool to see something new coming out, as well.  I'm going to go with a Great and a half on this. It really is a marvelously neat little trinket, even if I have no phone to use it on. You might, however, and you can order one right from Big Bad Toy Store by clicking here! 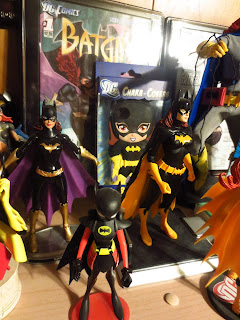 I own tons of Batgirl stuff, but the only Batgirl stuff I've looked at on the site so far is the DC Super Friends Wheelies Batgirl by Fisher Price and Batgirl #25 from Heroclix. There's quite a few new statues coming out this fall, all of which I have preordered through Big Bad Toy Store.  I'll have lots to review, fellow Batgirl fans!

Yes, that is a copy of Batgirl #1 autographed by Adam Hughes that  you see in the picture to the right.  Barbecue17 has connections.  You can too if you go to his Flickr page.