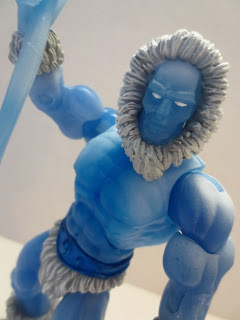 Back at New York Toy Fair, Mattel really surprised Masters of the Universe fans by revealing their plans for a six figure subscription consisting of various characters from the Filmation cartoons He-Man and the Masters of the Universe and She-Ra: Princess of Power.  The first figure from the Club Filmation subscription has arrived, and it's Icer, the evil master of cold.  Icer appeared in only one episode of  He-Man and the Masters of the Universe, "The Ice Age Cometh", and was voiced by John Erwin (who voiced He-Man himself).  Icer was not a character who was on my top 25 list, nor in my top 50, but having him in hand, I must stay that he makes a striking figure who should stand out on your shelf.  Blending together equal mixtures of Captain Cold, Mr. Freeze, and perhaps even Doctor Manhattan, Icer is worth checking out. Ready for a look at this freezing Filmation foe? Then join me after the break.... 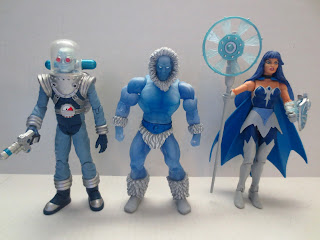 Since Icer uses the majority of the same body as most other figures in the line, he's pretty much the exact same size as everyone else, although his furry hood makes him closer to 7 1/4 inches tall.  The figure's legs, waist, torso, biceps, and hands are all reused from the basic He-Man body we first saw in 2008.  While Icer was based on the simply designed Filmation character, the 4 Horsemen have managed to make him look stylistically right at home in MOTUC. 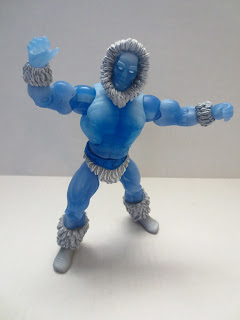 Icer's articulation is pretty standard for this line: Hinged angles, boot swivels, hinged knees, swivel thighs, ball jointed hips, a swivel waist, a hinged abdomen, ball jointed shoulders, bicep swivels, hinged elbows, swivel wrists, and a true ball jointed head.  All my joints are tight, but they're unfortunately all frozen!  Get it? Frozen? Icer? OK, moving on--nope, everything is solid and works fine on this guy. His ankles are really tight to, perhaps even more than usual due to his big fuzzy boots. The guy's got style. 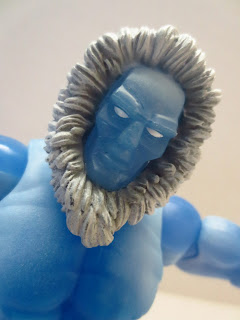 There isn't much new sculpting on Icer, but that's often par for the course with this line. If you're not familiar with the basic male body most figures in this line use, it's big and beefy, just like your favorite barbarian (unless your favorite barbarian is overly skinny or morbidly obese--then it's nothing like him).  What's new is Icer's head sculpt and the furry collars on his boots and wrists.  The head sculpt is quite good. It looks like a somewhat nondescript human face, kind of like Doctor Manhattan, but has flatter edges to the features as if it was crudely hewn from ice.  All of the furry parts of Icer's costume are really nicely sculpted and look fantastic. They very much match the ubiquitous furry trunk and instantly give the character a connection with cold weather, as opposed to him just being made out of crystals or being Jame Foxx as Electro.  I think the feet are new, also, as they seem to have folds on the tops of the boots. If I'm wrong, someone please let me know. 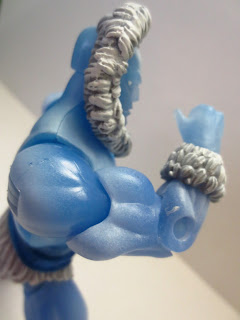 First of all, Icer is molded in a really nice translucent blue plastic.  It works great to produce an icy effect for the character and doesn't feel at all fragile or prone to breakage like previous translucent figures The Goddess and Roboto.  Covering that translucent blue plastic with a brushing of a white, snowy paint really makes the figure excel. It looks good and will make your Iceman figure jealous. To top that off, the various pieces of fur that Icer is wearing are painted white with a gray wash to give them a more realistic vibe. They look like yeti pelts. His eyes are a solid white, also, which gives him a cold, unfeeling appearance and makes him look menacing, despite the fact that he wears fur collars, but no other clothes. 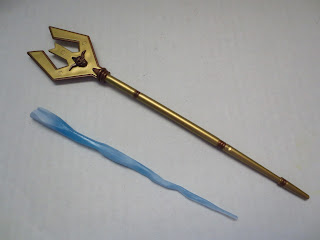 Icer comes with two accessories and they're both pretty impressive. First, he comes with a large icicle.  It's molded in the same translucent blue as Icer himself, and features a dusting of the same white, frosty paint. It's nicely sculpted to resemble a frozen stick of water, and is also very solid. I really like that Mattel seems to be giving us better quality accessories lately.  I'm not sure if it's from the cartoon, but it certainly works as a great accessory for this figure. Secondly, Icer comes with the Staff of Avion, another accessory from the Filmation cartoon. This one comes from the episode "Reign of the Monster", and was used by Skeletor to free the monster Molkrom. Stratos was responsible for keeping the staff safe, so in a way you now have an accessory to go with your Stratos figure. Hooray! It's a fairly standard metallic gold staff with a cool design and some little skull emblems on either side of the headpiece. Mine has a little paint slop on the headpiece, but overall it's a cool accessory. I love getting extra stuff like this- it makes MOTUC feel like the ultimate sword and sorcery adventure that keeps expanding with new artifacts, archetypes, and creatures every month. 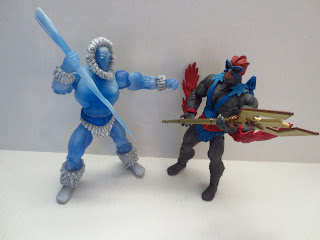 I thought Icer would be a pretty average figure, but after opening him and playing around a bit I realized he is definitely above average. As far as I'm concerned, Mattel has been knocking it out of the park this year with nearly every MOTUC release.  I'll easily state that Icer is a Great Masters of the Universe Classics figure. He's a cool first figure of a Filmation character that many fans love, but he's done in a way so that he feels like he could easily have been in the vintage line and will fit into any MOTUC collection. So far, Club Filmation is one "cool party!"

I love MOTU and have been keeping up with my reviews of them. I've looked at: Octavia, Spirit of Hordak,  Fang Man,  Karatti, King He-Man, Procrustus, Ram-Man,  Snake Face, and the The Fighting Foe Men.  If you're looking for this guy, Big Bad Toy Store has him still in stock, so you should probably grab him before he melts.