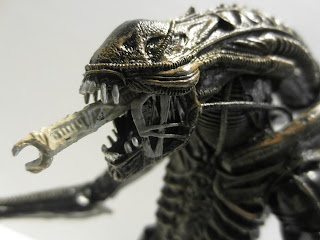 A few years ago NECA produced the Xenomorph from the original Alien and some of the various Xenomorphs from Alien Versus Predator: Requiem, but this is the first time they've produced a Xenomorph from Aliens.  Today I'm looking at the Xenomorph Warrior from series 1 of NECA's Aliens, which also includes Private Hudson and Corporal Hicks.  The standard "grunt" from the film referred to as a Xenomorph by Lt. Gorman, this figure definitely seems like a toy some fans would want to own at least a few of.  Based on the design of Swiss artist H. R. Giger from his print Necronom IV, the Xenomorph has become one of the most significent and recognizable creatures in film history.  You can tell this version of the Xenomorph is from Aliens due to the number of fingers (this one has two pairs of connected fingers and a thumb versus the six fingers of the original, the presence of a textured head versus a smooth dome, and a longer, more spindly nature.  It's that long, spindly nature that gives this figure some durability problems, however, which I'll get to in a moment. So enough with the introductions! Let's Rock & Roll! 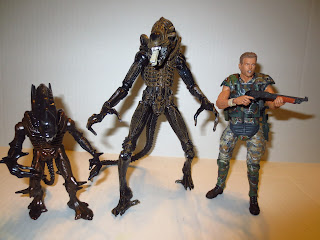 While they often move in a crouched position, we also see the Xenomorphs scurry and stand erect, which means you don't always realize how big these guys actually are.  Standing straight up, he's about 8 3/4 inches tall, certainly in scale with the Colonial Marines from the line and with other NECA action figures from properties such as Terminator, Rambo, Rocky, and Predator. Seriously, now you can make your Robocop versus Alien fantasy come to life! Besides, since he's an alien you can pretend he's whatever size you want. Want Mattel's DCUC figures to fight him? Go for it!  He's done in the super realistic style that NECA is known for. 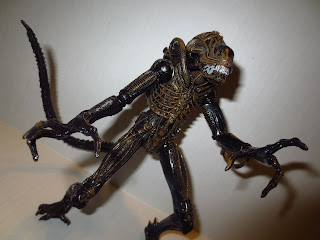 Be careful taking this guy out of the package because he's got more joints than Willie Nelson.  The Xenomorph Warrior features: hinged toes, swivel ankles, double hinged knees, swivel thighs, ball jointed hips, a ball jointed mid torso, a bendable tail, ball jointed shoulders, swivel biceps, double hinged elbows with swivels above and below the hinge, ball jointed wrists, ball jointed head, a hinged jaw, and an extending second mouth.  That's a ton of articulation, and for the most part it works pretty well. The jaw, head joint, mid torso, wrists, and tail are all wonderful in giving the creature some great, expressive poses. The swivel ankles are really weird, however, and make it difficult for this guy to stand.  Be very, very careful with the shoulder and thigh joints, however. Upon first removing this guy from the package, I found that my Xenomorph's leg has broken off. Fortunately, I purchased this from a retailer who sent me a second figure quickly.  I'm really glad things worked out, and I do think my original figure was truly defective, but be very, very careful in selecting your figure, and buy from a retailer you can trust to take a return. 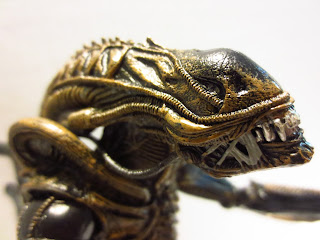 You really have to look at pictures or have this guy in hand to truly have an appreciation for how amazing the sculpt is.  From head to toe, there's no part of this figure that is not covered with rich, detailed sculpting that macabrely combines the organic and mechanical aesthetics of the Xenomorph. Having rich source material to work from can be either a blessing or a curse to someone crafting an action figure, but NECA certainly has chosen to utilize the brilliant creature designs as a blessing and an inspiration for brilliant details.  I could rattle on all day about the amazing details on the head, the excellent rib-like structure of the torso, the eerie, lengthy arms, and the tail that's just covered with small segmented spines. I'll simply tell you to look at the pictures to see how well the Xenomorph was translated from screen to plastic. 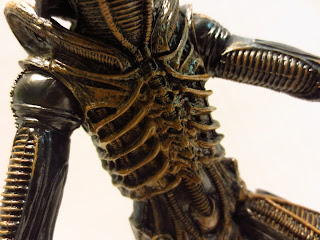 It's tough to tell when watching the movie, but the Xenomorph Warriors do have the same brownish tint and detail to them that this figure has.  It's easy to forget that because, regardless of how many different Xenomorphs there are, the original all black version from Alien always stands out in my mind.  The figure is molded in a shiny black plastic that helps to give the Xenomorph that slick, wet look of it's hard exo-skeleton.  The brown paint applied over the base is almost a copper color. It's brushed on in such a way as to really bring out all of the little details in the sculpt, as well as make the figure stand out.  It's amazing how much one color of paint can do for such an awesome sculpt!  The only place with any other paint work is around the mouth.  The exterior teeth are painted silver, and the edges of the mouth have a greenish-gray slimy paint applied. Once you pull out the interior mouth, you'll notice it also has silver teeth (a pretty basic paint application), and is molded in a greenish-gray plastic to emphasize the more organic look of the inner mouth from Aliens. 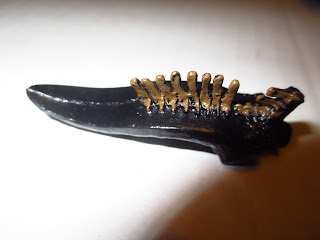 The Xenomorph Warrior doesn't come with any accessories. He's pretty large compared to the other figures in the series, but a facehugger would have been an amazing accessory and would have sent this guy through the roof.  I'm actually really surprised that we didn't get anything.  There's a protrusion on his back (not one of the four uniform ones, but a fifth one) that is removable (at least on mine), but I'm not sure that's intentional or anything. Some individuals have commented that it is removable to allow you to pose the Xenomorph with his head further back, which makes sense.  Of course, you also could have the Predator yank it out as battle damage. 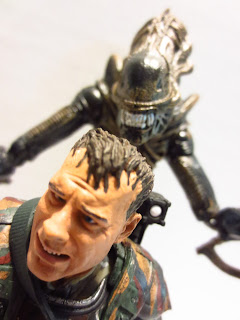 I love this figure. If you found yourself always playing with the Scorpion Alien as a kid because he reminded you the most of the Xenomorphs from Aliens, you'll be thrilled.  He features some of the best sculpting I've seen on a figure this year. Still, I did have some breakage issues with my first one.  I was fortunate enough to get mine replaced, and am willing to write mine off as a fluke--looking at both the broken figure and the regular figure, this doesn't seem to be indicative of the figure's design or quality, but simply a one-off quality control error.  If I begin to hear that this is a prevalent issue with these figures, or experience problems with my second figure, I'll come back and edit this review. For now, simply make sure you buy or order your figure from somewhere you can easily return it if necessary.  I'm anxious to see if NECA is willing to expand this line similar to how they have with Predator (perhaps we'll get some of the crazy Kenner variations in the future?). I know I'd be down for a Gorilla Alien and Atax in NECA style. I'm giving the figure I have that works perfectly a Great and a half and the figure that's leg broke off a crap and a 1/2. Overall, I'll put a good on the review header, but know that this depends heavily on if your figure breaks like my first or is perfect like my second.
I'll be reviewing this entire series here on ThEpic Review. I've already looked at Private William Hudson from NECA's Aliens.  From the Kenner lines, I've looked at: the Alien versus Predator 2 pack, the Series 1 Space Marines and the Power Loader, and the Series 1 Xenomorphs.  From NECA's Predator line, I've reviewed: Jungle Extraction Dutch, Jungle Hunter and City Hunter Predator 2 pack, and Jungle Patrol Dutch.  I've also looked at some of the Prometheus figures from NECA:  David 8 and Deacon.  Big Bad Toy Store has most of these figures in, especially the new Aliens figures, at great prices. Click on our banner at the top and pick them up today!

There's only one man who wants NECA to redo the Wild Boar Alien--Barbecue17! He has lots of Alien, Predator, and Prometheus pictures on his Flickr account, so check them out!