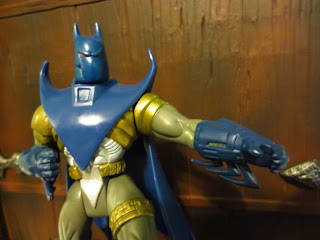 Released in 1995 as part of the second series of Kenner's Legends of Batman, Knightsend Batman represents John Paul Valley while he took up the mantle of Batman during the Knightfall saga.  While some fans today love to dismiss this costume as an example of 90's costume extravagance, I think it's still an interesting costume that did a decent job of representing Valley's Batman as a completely different entity as Bruce Wayne's Batman.  I find it extremely interesting how much Kenner used the storyline and concepts from the Knightfall saga in Legends of Batman, and yet they never made a Bane figure to go in the line (if you want a little more information on the history line, check out my review of Nightwing from series 1).  It's interesting to look at this figure and think that it came out the year after Todd McFarlane's first Spawn figures hit shelves and the same year that Batman Forever splattered on to movie screens.  Ready for a look at Kenner's larger and more legendary Batman figures? Then join me after the break....of your spine! 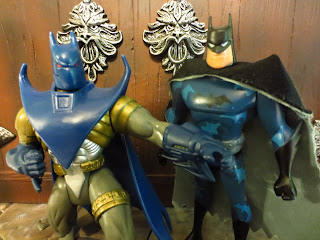 Knightsend Batman is 4 3/4 inches tall, but he's definitely hunched over, so he'd be a bit taller if standing straight.  While these guys are larger than Kenner's previous Batman lines, they're more in scale with later lines such as Batman Forever and Batman & Robin The Batman Movie That Shan't Be Named.  They're more muscular than most previous Batman figures as well, and more dynamically posed, which is an issue I'll get to in a moment. 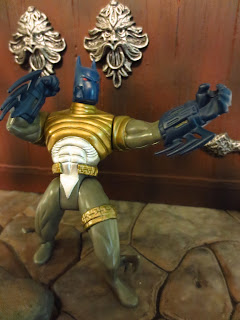 Ready for the Kenner 5? Ok, here it goes: Swivel hips, swivel shoulders, and a swivel neck. That's it! Once again that was fairly standard for the time and you can still do some fun stuff with the figure. My biggest problem with this figure is due to the way he's posed, however. He's posed with his knees bent as if he were lunging forward, but he cannot stand unaided in that position.  You'll have to either use his cape to prop him up, or lean him against something. That's disappointing, as he'd be a great figure otherwise. 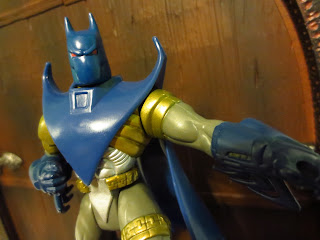 Kenner's design philosophy here was taking Batman and making him more dynamic and more muscular. We're not approaching Power of the Force II levels of muscle yet, but we're close. The sculpt on the figure is quite good, however, and nicely captures the look of Jean Paul Valley's Batsuit.  The legs feature the wicked leg spikes he wore. Kenner even remembered to put the "utility garter" around his left thigh.  While much of the figure's look is captured by the removable cape piece, the body underneath looks like an armored but flexible combat suit.  The gauntlets he wears are incredibly cool--they're tastefully oversized and feature some impressive details and blades.  The head is sculpted to look like the helmet Valley wore. It's actually a fairly good recreation of the artwork, if a little too rounded. 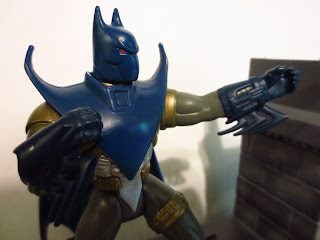 One of the best things about Legends of Batman was that it typically featured more Batman-like coloring on the costumes. No neon here!  Knightsend Batman makes good use of the traditional gray and blue Batsuit and adds in metallic gold and silver on the torso.  The gold on the left sleeve is a little messy, but overall this guy looks good.  I love the red eyes! 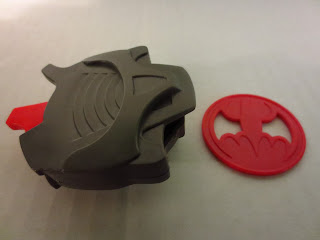 Kenner just loved including missile launchers with their toys, and so Knightsend Batman gets a firing weapon.  The back of the package says that the figure includes "mighty arm gauntlets", a "full headpiece", and an "aerial torpedo launcher."  Let's tackle them in that order, shall we?  The arm gauntlets are simply part of the sculpt. They're cool, but not an accessory, and I dealt with them earlier. Moving on, and we come to the "full headpiece", which is actually a fancy way to say removable cape, apparently.  Jean Paul Valley's Batsuit had a helmet rather than the traditional cowl, and what looked like a metal, bladed cape.  The cape here is more dynamic and "sharp" looking than the traditional Batman cape, but it doesn't look exactly like the comic source material.  The chest armor and cape are one separate and removable piece that slides right over Knightsend Batman's head. It's made of a very solid plastic with little give, but it does stay on tight.  Last, we have the "aerial torpedo launcher." Umm, OK.  This is a pretty decent sized disk launcher that launches a round red disk with a bat emblem on it.  The thing's decent, but would probably be better with a figure twice that size. Besides, who shoots discs anyway?  Knightsend Batman can't even hold this thing without falling over unless you use his cape for more balance. He comes with a trading card, too, just because. 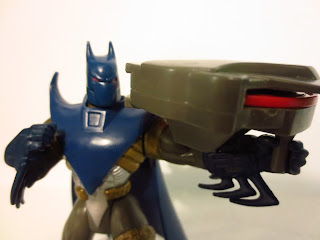 This really could have been a great figure. He's comic accurate, nicely painted and sculpted, and features some decent accessories. It's just too bad that he can't stand.  That really, really irks me, as this is the kind of figure that would look cool standing about anywhere, especially on my desk. Now he'll just have to lean. If he could stand, I may have been tempted to give this figure an Epic as an awesome Batman figure from the 90's, but as the figure stands (or rather doesn't), I'm going with good. He's a good figure, just don't take your hands off of him. He's far too awkwardly posed to stand up on his own.

When writing reviews, Barbecue17 tends to sit on his leg. When it goes numb, he has a difficult time standing as well. He's falling over the price, putting junk on his Flickr account left and right!