Action Figure Time Machine 90's Edition: Viking Batman from Legends of Batman by Kenner (Confirmed: Good and a half) 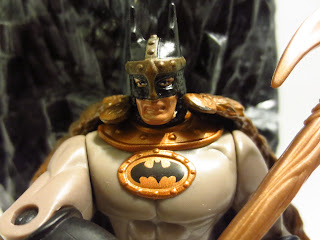 Ready for another Elseworlds Batman figure from Kenner's Legends of Batman line?  This time I'm looking at Viking Batman. The flavor text on the back of the card states, "Thundering out of the frozen Northlands across the uncharted world, Viking Batman searched out new lands to explore, and discovered civilizations to protect from evildoers."  Obviously we knew that Batman would be portrayed as a heroic viking rather than the stereotypical "rape and pillage" viking, so we now have a figure that seems like it comes from an Elseworlds Batman crossover with Vertigo's Northlanders.  Released as part of the second series of figures in 1995, Viking Batman is ready to wage war on the evil doers on your toy shelf! Learn more after the break... 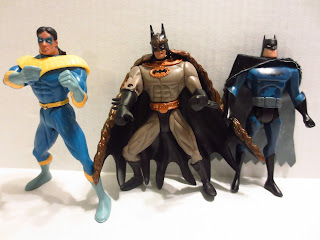 With Legends of Batman, Kenner was truly moving into the period of action figure design that focused on better sculpting and paint with a more dynamic design.  Viking Batman stands just a hair over 5 inches tall due to the points on his cowl. His figure is crouching less than many of the other figures, so he'll look noticeably taller than some of the other figures. He'd fit in perfectly with Batman movie figures post Batman Returns, and with Kenner's Superman and Total Justice lines.  He actually has quite a realistic look to him, especially when compared to many of the other Batman figures of the period. 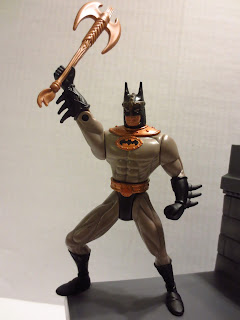 Viking Batman features an action feature that ends up giving him more articulation than just the standard Kenner 5. Batman has: swivel hips, swivel shoulders, a swivel neck, and a hinged right elbow. The hinged right elbow is part of his action feature: twist Batman's waist to the left and he'll spring back to swing his ax.  The right hand holds his ax, and the swinging of the body extends the loose hinged elbow, thus making the ax swing out. It's pretty neat and doesn't interfere with the other joints. Without any accessories present, it also looks like Batman is delivering a backhanded slap to one of his villains. "Don't talk back to me, son! I'm Batman!" 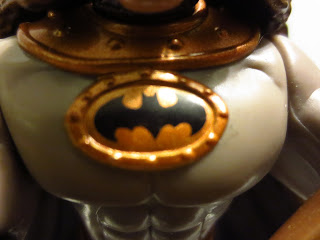 Before launching into what I like about the figure, let me mention what I dislike so that I can get it out of the way.  Rather than attempt to make him look more rugged and period-appropriate, Kenner chose to put the Viking armor right over what seems to be a fairly standard body suit. If the tan-ish plastic making up the body had been molded in a flesh tone that matched Batman's flesh tone, I think the figure would have looked much cooler. As it is, this looks like Batman threw on a few pieces of armor over a standard Batsuit.  The armored pieces are quite good, though, and add a lot to the look of the figure, although the boots and gloves don't look particularly Viking-ish.  They look like standard Batman gear. They're nicely sculpted with some decent details, but they don't scream Viking.  The belt and chest piece do, though.  The belt looks like studded metal with a bat logo on the front, and the collar/chestpiece also looks like studded metal with the oval shaped Batsymbol hanging down.  The head might be the best part, as it looks like Batman is wearing a spangenhelm-influenced cowl with ironstrips on the sides.  Interestingly, while many of the other Batman figures have the flat, white eyes that Batman is usually depicted with in drawings, Viking Batman's eyes are actually visible. It's quite a nice head sculpt for the scale. 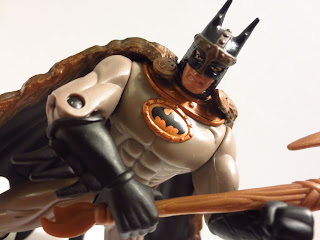 I've already mentioned how I wish the body had been painted in Batman's flesh tone in order to make him look more savage. That didn't happen, though, and instead he's painted in a ...mauve, maybe?  No wait, it's taupe.  Yup, after dragging Viking Batman to my local paint store I was able to confirm he's wearing a taupe bodysuit. Anyways, the blacks are back, the gold armored pieces are a nice, shiny gold, and other than a little slop around the cowl edges, the paint is neat and clean. 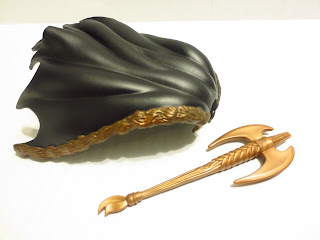 Viking Batman comes with two accessories and a removable cape.  The cape is made of a rubbery plastic and features a ridge of fur on the top and side edges, which is a neat touch.  The fur is painted brown and looks pretty decent, if not just a bit messy. Still, perhaps that messiness adds to the furry look of the plastic.  The cape sits on Batman's shoulders like most other plastic Batman capes, but the edges that fit around the neck have what looks to be two round clasps featuring the Batsymbol. 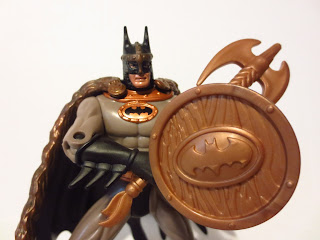 For offensive weaponry, Batman carries a large double-bladed ax.  While the Vikings most certainly used axes in combat, the image of them carrying massive double-bladed axes is a modern invention.  Still, Batman's ax is quite cool. The blades seem to be variations of the Viking bearded ax that have been shaped to somewhat resemble the Batsymbol.  The handle tapers a bit at the bottom, and features some wood grain and iron plating detail on the handle.  To protect himself, Batman comes with a round shield, one of the most common pieces of equipment for Viking warriors. Small and efficient, the shield features a hole on the back that fits tightly over Batman's left fist. The front features a wood grain pattern and what appears to be a metal band around the edge. The center of the shield features a design of the traditional Batsymbol. It's a nice accessory compliment that tries to take into account some historical accuracy, and it isn't another missile launcher, so I'll say it's a success. 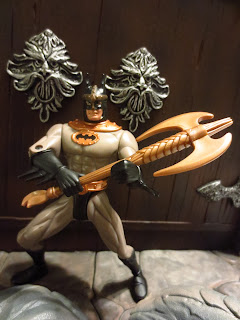 If you're going to cherry pick from Legends of Batman, Viking Batman shouldn't be on the top of your list. If you're looking for crazy Elseworlds versions of Batman, though, snap him up. He's rather unique, and can be quite a bit of fun.  I like his accessories and the action feature, so I'm giving him a good and a half.  He's definitely a worthy addition to a collection of various Batman figures, no doubt about it.
The Epic Review is your Batman review headquarters!  For Legends of Batman, I've reviewed Nightwing, Knightsend Batman, The Riddler, and Samurai Batman.  Other Batman toys we've reviewed have been: Batman from Young Justice Invasion,  Arctic Shield Batman from Mattel's Batman line, Talia al Ghul from DC Collectibles' Arkham City, Planet-X Batman, The Dark Knight Returns Batman, and Injustice Batman from Mattel's DC and Batman Unlimited lines, Laughing Gas Joker from Kenner's Legends of the Dark Knight,  and the Dark Knight Rises Bane from Hot Toys.  Click on the banner above and you can find many of these Batman figures (and others) at Big Bad Toy Store.