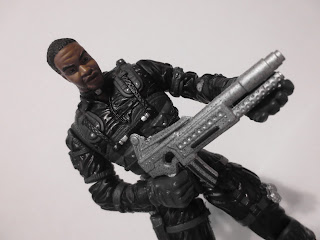 Well, I haven't gone back and watched Spawn since I reviewed Jessica Priest last month, but I have added a few more Spawn: The Movie figures to my collection.  One of these is Al Simmons, the government operative who becomes Spawn after he is assassinated by Jessica Priest.  In the film Simmons is played by Michael Jai White, who according to Jet magazine holds the distinction of being the first African American to play a major comic book superhero in a major motion picture. (Fun Fact: Michael Jai White also played the mob boss Gambol in The Dark Knight.)  Shaquille O'Neil's Steel opened just two weeks after Spawn, although most people don't want to remember that movie for any reason. Anyways, Al Simmons here is the fourth Spawn: The Movie figure I've ever owned, and I'm amazed I never bought him when I was younger. Well, are you ready to join me in taking a look at Al Simmons? Let's jump right in! 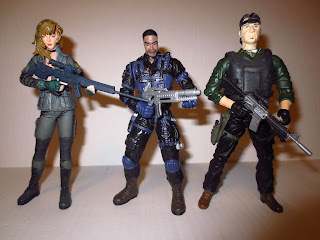 I remember that, at the time, every toy publication was going nuts with how realistic McFarlane's Spawn: The Movie figures looked. They were pretty impressive for that time period, and certainly aren't abysmal now, but they look more comic bookish. They do fit in pretty well with most of the other 90's Spawn figures, or at least the ones before McFarlane changed their style from articulated action figures to more statuesque figures.  Mr. Simmons measures in between 5 3/4 and 6 inches.  I always keep my Spawn: The Movie figures on a shelf with my McFarlane Metal Gear Solid and Total Chaos and Plan B Special Forces figures. The sizes aren't always perfect, but they work. Al Simmons, Jason Wynn, and Jessica Priest all have that cool tactical vibe that never goes out of style. 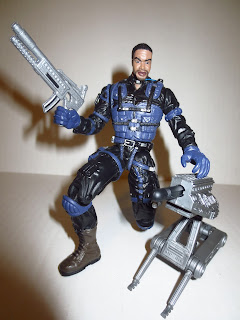 Al features pretty standard articulation for a McFarlane figure of the mid/late 90's: hinged knees, swivel hips, a swivel waist, swivel shoulders, a swivel right bicep,  hinged left elbow, swivel wrists, and a swivel neck.  Everything is solid and works well. A kid could easily play with this guy and have fun, although the lower body movement is somewhat limited. Hinged knees are great, but without a stand or ball jointed hips they don't do much.  The upper body isn't bad. It's fairly uncommon these days to see asymmetrical articulation, but it does allow you to do a few different poses and kind of allow Al to hold his gun with both hands. 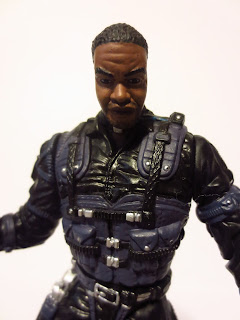 As always, McFarlane figures are fun to look at because of all the crazy details. While Al doesn't have any crazy deformities, extra heads growing off of his body, or differently sized boots, he does have a really cool tactical outfit that seems both practical and functional.  He's basically wearing a black outfit (maybe a jumpsuit, maybe a flight suit) underneath a tactical vest.  There are lots of pockets and pouches all over the outfit--I'm sure Al's carrying extra ammo, lock picks, ink ribbons, bubble gum, and plenty of other useful items in them.  He's got three little grenades on his left thigh, one grenade on his left bicep, a knife on his right forearm, and a pistol in a holster strapped to his right hip. I wish that pistol were removable!  The vest has a nice quilted texture to it, too, and to stay in contact in the field he has a communications device around his throat and on his shoulder.  The body is excellent, but I think the head sculpt leaves a lot to be desired. I really don't think McFarlane captured Michael Jai White's appearance well. The hair is off, and the head has an odd shape to it. It's not a bad sculpt, it's just not a good replication of the actor's likeness. It's also sculpted as if he's looking down at the ground, which is pretty odd. 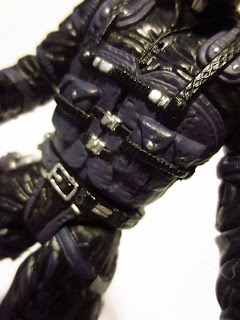 The paint is somewhat simple for a McFarlane figure of the period, but it's still pretty good.  There's not too many crazy details like on some characters, so Al is cast in a glossy black plastic that gives his jumpsuit a bit of a shine.  The vest and other straps and holsters are a purplish blue that blends well with the black. All of the little details are painted too, whether it's a zipper on the left shoulder, all the various snaps on the vest, or the grenades strapped to his thigh. 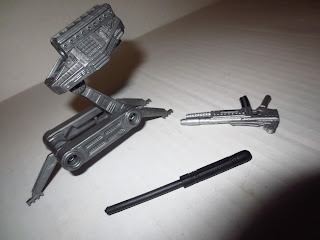 I always like McFarlane's accessories, and, while Al doesn't come with as many as some figures do, they're pretty cool.  First, he has a small assault rifle.  It's molded in a speckled silver plastic and features a few black paint apps to help it stand out. It fits easily in his right hand, but can also be held in his left. 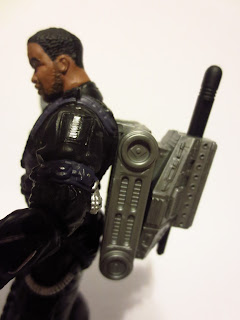 Second, he comes with a very cool portable missile launcher. I vaguely remember this from the movie, but it's a cool accessory that can fold up and fit conveniently on Al's back via two little hooks that fold out and fit into two grooves on his back.  The launcher itself is on a neck that folds out from the body, and three legs fold down to provide a base.  A small missile can be pushed into the launching unit- just pull the missile back and release to fire it.  This is a wonderfully cool accessory that would go well with nearly any toy line. 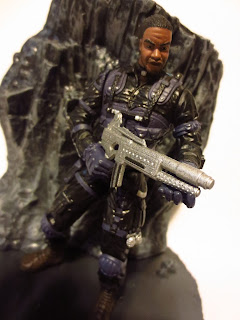 I really like McFarlane's Spawn: The Movie series, particularly because the human figures fit in so well with my beloved Special Forces by Resaurus/ Plan B and Metal Gear Solid figures.  This figure has the great McFarlane sculpting of the late 90's, as well as some killer accessories. The likeness is off, and the articulation is a little funky, but he's not a bad figure if you're completing this set. Easily a good and a 1/2.
The only other action figure from the Spawn: The Movie line that I've reviewed so far is Jessica Priest.  Other McFarlane toys we've reviewed are Cortana from Halo 4, and the Black and White Michonne with Pet Walkers 3-pack from the Walking Dead line. While Big Bad Toy Store doesn't have any Spawn: The Movie figures in right now, they do carry a ton of other McFarlane stuff.

Barbecue17 often sleeps in a tactical jumpsuit and flak jacket, simply because he can.  He also posts pictures and stuff to Flickr.