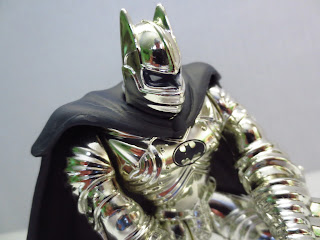 I hope everyone's enjoying these Legends of Batman reviews as much I'm enjoying collecting this cool line from the 1990s.  While there have been a few Elseworlds stories where Batman fights during medieval times (Batman/ Dark Joker: The Wild, Batman: Dark Knight Dynasty, and Batman: Dark Knight of the Round Table come to mind), I don't think he's worn a costume like this in any of them. (By the way, would anyone be interested in reading reviews of the various Batman Elseworlds comics?  There's a ton of them and most aren't very well known.) Anyways, here's what the back of the card says about Silver Knight Batman, a deluxe figure from series 2 of Kenner's Legends of Batman line released in 1995: "In dark Medieval days now long forgotten, the first son of a powerful nobleman operated as the imposing figure of Batman.  Clad in brilliant, shining battle armor, Silver Knight Batman heroically led his empire's brave soldiers across the land, battling evil warriors at every turn, and banishing the vicious heathens with his smashing battle axe and slashing sword. As heir apparent to the Emperor's throne, Silver Knight Batman strived to someday end the warring and bring peace to his land forever."
Well, that's the story folks. Ready for the review? To the Bat-armory! 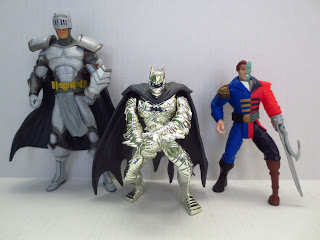 Silver Knight Batman is about 4 3/4 inches tall, but he is crouching quite a bit. He's in scale with the rest of the Legends of Batman figures and some of the later 90s Batman figures, as well.  He was released as a deluxe figure in the line, but I'm not entirely sure why. Maybe because of the vac metal?  He only comes with three extra accessories and isn't any larger than any other figure, so I'm not sure what specifically qualifies him as deluxe. It's gotta be the shiney factor. 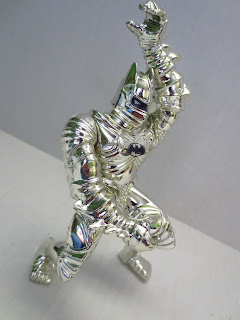 He has very little articulation, particularly due to his built-in action feature.  The only usable joints are his swivel hips, as his swivel arms are connected to his action feature.  When you lift up on a lever on Batman's back, he lifts his arms.  Let go or pull the lever down and he smashes whatever weapon he's carrying onto some hapless fool's head. Pity them! While the entire figure is built around the action feature, it does work well and is fun as far as action features go. He also can stand quite well on his own. 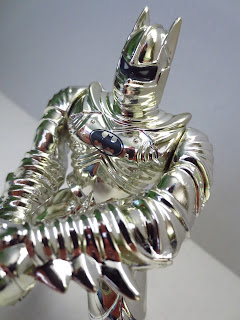 While many of the Legends of Batman figures have simply placed various pieces of armor over a traditional body suit, Silver Knight Batman is decked out in a full set of plate armor.  While it looks like you can see some mail around his waist, the rest of the armor accurately looks like various plates with very smooth, clean surfaces.  There are some visible rivets, especially on the chest and back, and some more unique styling on the chest.  The knees, shoulders, and elbows all look like they have segmented plates that would allow Batman to move in the big, clunky suit of armor.  The gauntlets and helmet, while fitting seamlessly with the plate armor suit, certainly pay tribute to Batman's standard costume.  The gauntlets have the traditional arm spikes, and the helmet is shaped like Batman's cowl.  The eye slit is open and we can see Batman's masked eyes peeking through. There are some minor lines and dents left over from the vac metalization process, but they're pretty minor and really par for the course with vac metal products. 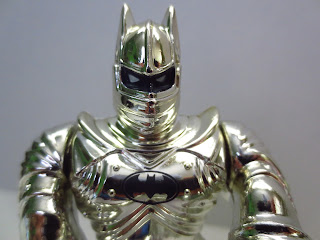 There isn't really any paint on this guy, as he is mostly covered with a shiny silver vac metal. It's a nice effect and definitely makes him stand out on the shelf. While some companies can't get vac metal right (*cough* Hurricane Hordak *cough*), Kenner managed to make sure that this guy is nice, solid, and doesn't flake.  He really is pleasantly shiny!  He does have a black tampo stamp on his chest of the Batsymbol, which is nice, as well as painted eyes and a portion of the cowl peeking through his helmet. I'm not the biggest fan of vac metal, but for fans who love it this is a great figure to track down. 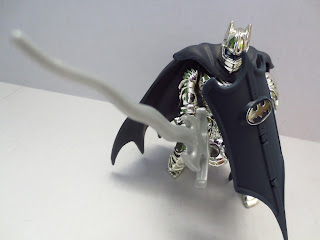 While I'm not sure the accessories are really enough to consider this a deluxe figure, they are quite nice and plentiful.  Of course the figure comes with the ubiquitous trading card, but Silver Knight Batman also comes with a removable cape, a shield, and two weapons.  The cape is a bit difficult to get on and off of the figure, which isn't actually a bad thing: I hate action figure capes that easily fall off during play and posing.  It's made of a thick but flexible material and seems like it might be intended to represent leather. 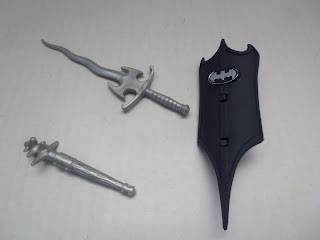 The shield is a kite shield and features a vac- metalized Batsymbol on the front, (although the top half of mine isn't covered). It's got a plastic hook on the back so it can fit easily over Batman's arm (the left works best). To fight evil, Batman comes with a morning star and a curvy sword, both molded in a silverish plastic.  The morning star looks like it's mounted on a club of wood (that's silver for some reason) and has multiple spikes and studs on both the head and base of the weapon.  The sword looks like a claymore, but it has a really curvy blade. Batman can hold either weapon with both hands, which is really a nice feature. 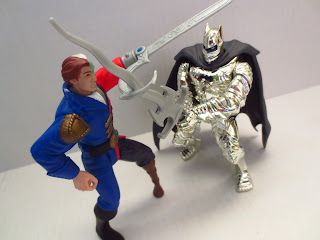 Despite the fact that he has a cool design,  lots of weapons, and some decent vac metal, this is a tough figure to get excited over. Batman in a suit of armor is pretty awesome in and of itself, but the figure is really built around the action feature of bashing stuff. He's not bad looking on the shelf, though, so I'll give him that. His action feature also works well and is kind of fun. I'll go with a good rating on this guy--it's a decent figure wit no major QC flaws. If you're trying to complete Legends of Batman, collect random historical Batman figures, or simply love vac metal figures, you'll be happy. Otherwise, there are better 90's Batman figures to hunt down.

I love Batman and will gladly buy any random Batman toy I can find.  From Legends of Batman, I've reviewed Ultra Armor Batman, Dark Warrior Batman, Nightwing, Knightsend Batman, The Riddler, Viking Batman, and Samurai Batman.  Other Batman toys we've reviewed have been: Batman from Young Justice Invasion,  Arctic Shield Batman from Mattel's Batman line, Talia al Ghul from DC Collectibles' Arkham City, Planet-X Batman, The Dark Knight Returns Batman and Injustice Batman from Mattel's DC and Batman Unlimited lines, Laughing Gas Joker from Kenner's Legends of the Dark Knight,  and the Dark Knight Rises Bane from Hot Toys.  Click on the banner above and you can find many of these Batman figures (and others) at Big Bad Toy Store.