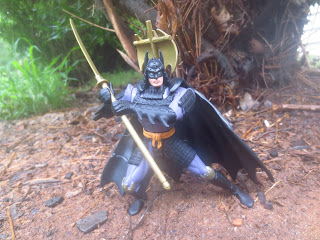 So far, every figure I've reviewed from Kenner's 1994-1996 Legends of Batman has been fairly normal.  We had Nigthtwing, Knightsend Batman (which was Jean Paul Valley as Batman), and the Riddler.  Nothing too crazy, right?  Well, looks like its time for something a little out of left field. Ladies and gentlemen, meet Samurai Batman.  The back of the package says, "The legendary figure of Batman existed in ancient Japan as Samurai Batman, a brave and strong warrior who pitted his skills against the evil warlords, or daimyo."  That actually sounds pretty cool, and as I mentioned in the review of Nightwing, it sounds like something that may have inspired Grant Morrison in writing Bruce Wayne: The Long Road Home.  Batman is a character who works remarkably well no matter what setting you place him in. Whether you're reading an Elseworlds comic, something from Morrison's run on Batman, or playing with a figure of Batman in period dress, his story always manages to work.  I believe that's a real testament to the strength of Batman's character and motivations; random violence always effects, no matter where or when they live, and Batman's story of loss is universal. I can feasibly see a strong story where Batman is born during a period such as the Edo period and becomes a figure fighting against an evil daimyo.  If you pick up this figure, feel free to use that basis in creating your own adventures!  Is the figure any good, though? Read on and find out! 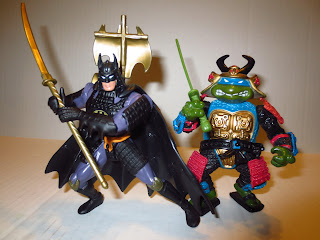 Here's Samurai Batman, he's actually 4 1/4", with the afro crest of his helmet 4 1/2".  He's dynamically posed, like the rest of his Legends of Batman brethren, and so he'd probably be taller if he were standing up straight.  As you can see, he's slightly larger than figures from earlier Batman lines, but his pose makes him appear shorter or similar in size. 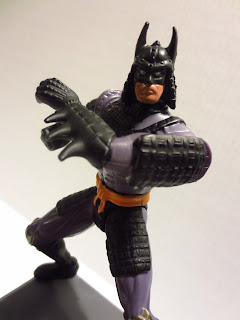 While Samurai Batman features the traditional Kenner 5 (swivel hips, swivel shoulders, and a swivel neck) he also has a waist that can swivel to his right and swing back "for slashing action."  This is the first Legends of Batman figure I've looked at with an internal action feature.  And overall, I don't find it terribly intrusive to the sculpt or to the standard articulation (remember, none of these figures have plain swivel waists).  The feature works well, but the positioning of Batman's arms doesn't make for a convincing slash.  As mentioned above, Samurai Batman is very preposed; fortunately it's a pretty decent pose. He's in a battle stance with left leg extended, right leg bent, and his arms back holding one of his three included accessories.  I like the extended left leg because if you're playing with the figure (it is a toy, for goodness sakes) it makes for a very nice flying kick.  He stands well with or without his cape. 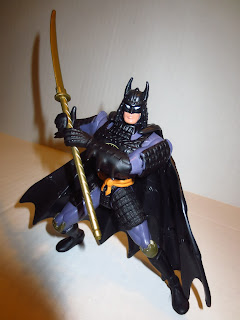 Of the Legends of Batman figures I've looked at so far, this one's sculpt impresses me the most.  Samurai Batman manages to be both visually identifiable as both a samurai and as Batman immediately upon looking at him.  While the figure appears to be in a muted purple bodysuit, it's the various pieces of armor all over his body that truly give him the armored appearance of a Samurai.  His high boots are well detailed with an attached knee pad that suggests the shape of a bat.  He has kusazri draped around his waist and haidate on his thighs. They have a great texture to them and are held in place by a belt.  While it's not as long as it probably should be, the dou on his chest and upper back is also sculpted with a nice texture that conveys various pieces of armor and leather attached together.  The upper arms are covered by sode and the lower arms by kote adorned with the traditional Batman gauntlet spikes.  They're extremely pointy and long, nicely blending in with the armor.  The kabuto blends together the traditional samurai helmet with all of the essentials of Batman's cowl.  Rather than some type of traditional horn for the crest of the helmet, Batman's kabuto utilizes more curved versions of the traditional ears on the cowl.  Below the helmet is a shikoro, or neck protector.  There's also a separate cape made of hard plastic. I'll talk about it a bit more when I get to accessories, but it nicely adds to the look of the figure.  Overall, the suit is really well detailed and features many accurate elements of traditional Samurai armor. See--Batman is both fun and educational! 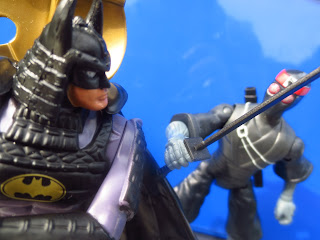 A solid paint job helps make all of these finely thought-out details stand out.  Kenner chose to use a more muted purple color for Batman's bodysuit and black for his armor. It's a nice color scheme that adds color while still looking appropriate for the Dark Knight.  The lines are all very clean, even on smaller details such as the bat shaped knee pads (which are a dark silver), the belt (which is yellow in homage to Batman's utility belt) and the lower part of Batman's face that is exposed.  There's a gold tampographic of the bat logo on Batman's dou, which looks cleanly applied and stands out nicely. 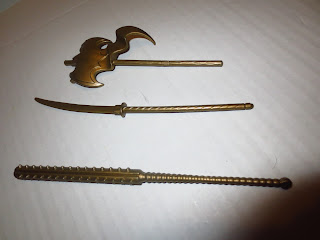 Samurai Batman is loaded with accessories. Besides his removable cape, he comes with three different weapons he can hold.  First is the "no-dachi sword" (as the packaging calls it) which features a handle longer than the blade. The purpose was typically for fighting on horseback, although this figure's version doesn't look like any actual sword I could find except those giant blades used by the Elves during the prologue of Peter Jacksons' Lord of the Rings: The Fellowship of the Ring.  Next, Batman comes with a hata-jirushi or a personalized banner.  The banner is attached to a wooden pole and looks like the bat symbol.  Last is the kanabo, a giant iron club covered with studs and spikes.  This is a really wicked piece that is longer than Batman is tall. Batman can hold all of the weapons easily in a two handed grip, and they're all molded in a bronze-colored plastic.  He also has the removable cape. It's a bit flexible and features some cool details, as well as a space to store the banner. Convenient! 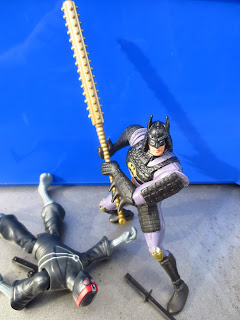 I love this figure.  Much how NECA has been recreating some of the classic Kenner variants for Robocop and Predator, I would love to see someone like Mattel or DC Collectibles recreate some of these awesome Legends of Batman variants. The sculpt and paint work are just so good here, and the concept really works. I've said multiple times that it's hard to make a Batman figure that isn't fun, and Samurai Batman manages to be both fun and unique.  I'm glad to add him to my collection of Elseworlds Batmans. While the articulation was limited due to the time when this guy was released (1995), it’s still a solid figure.  For this trip through the Action Figure Time Machine, I’m confirming Samurai Batman as Great!

The Epic Review is your Batman review headquarters!  For Legends of Batman, I've reviewed Nightwing, Knightsend Batman, and The Riddler.  Other Batman toys we've reviewed have been: Batman from Young Justice Invasion,  Arctic Shield Batman from Mattel's Batman line, Talia al Ghul from DC Collectibles' Arkham City, Planet-X Batman, The Dark Knight Returns Batman and Injustice Batman from Mattel's DC and Batman Unlimited lines, Laughing Gas Joker from Kenner's Legends of the Dark Knight,  and the Dark Knight Rises Bane from Hot Toys.  Click on the banner above and you can find many of these Batman figures (and others) at Big Bad Toy Store.

Repeated viewings of Teenage Mutant Ninja Turtles 3 have qualified Barbecue17 as a samurai, (at least in his mind).  Check out his most honorable photos on Flickr.