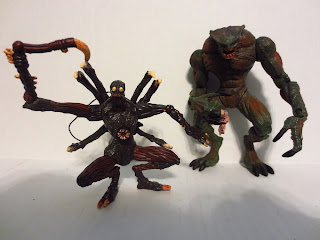 Yes, I know Resident Evil week was last week, but I still have a few Resident Evil figures I wanted to review. I'm so close to having reviews of the complete Toy Biz Resident Evil series that I figured I'd go ahead and finish things out. I also just got these guys last month and I'm trying to review every toy I get. Just because, really. Anyway, here's another cool two-pack from the first series of Resident Evil toys from Toy Biz that featured characters from the original video game. In my opinion, this set features the deadliest and most frightening creature in the entire game: the Hunter.  The Hunter doesn't appear until after you've gone to the guest house, defeated Plant 42, and are sent back to the main Mansion by Wesker to investigate further.  As soon as you walk in the door you're greeted with a cut scene of a fairly agile creature making it's way through the gardens and into the door you just entered. Then, unless you're ready with your shotgun and at nearly full health, the Hunter proceeds to cut off your head. Hope you saved recently!  Chimera is a little annoying, but nothing compared to the Hunter.  Ready to check these guys out? All right, well let's go! 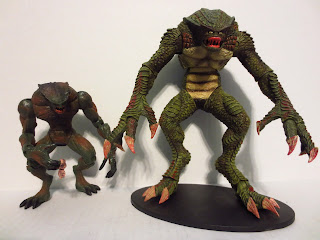 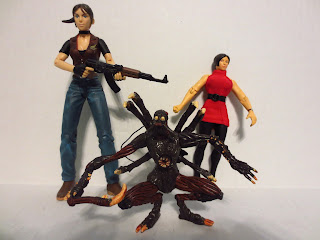 Standing with a bit of a crouch, the Hunter stands right around 5 inches tall. He's not much taller than a standard human figure in the line, but he is much bulkier.  Chimera's only 3 1/3 inches tall, but that seems about right when compared with his in-game size. He's kind of like a creepy little spider monkey that swings off the ceilings. The Chimera might fit in well with your Palisades or NECA Resident Evil figures, but the Hunter will definitely be too short.  They'd go great with a variety of other toylines, however, such as G.I. Joe or Teenage Mutant Ninja Turtles. 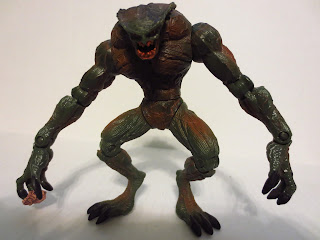 The articulation on the creatures in the Resident Evil line can be all over the place, with some creatures having scads of articulation while others are closer to being glorified accessories.  The Hunter is one of those well-articulated creatures while the Chimera is more of a glorified accessory.  The Hunter features: hinged knees, swivel hips, a spring loaded swivel waist, ball jointed shoulders, hinged elbows, and hinged wrists.  The articulation is pretty decent, especially the arms, and allows the Hunter to assume a wide variety of player-killing poses.  The spring loaded waist is a pretty nifty feature. Just twist the waist and it swings around, allowing the posed claw to swipe at an enemy. 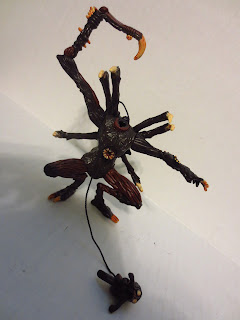 The Chimera can be difficult to stand up and only features swivel arms and a removable head (attached to a string). Mainly built around an action feature, the Chimera features the ability (or disability) to have it's head pop off whenever you push the button on his chest. The package shows the Hunter smacking the Chimera in the chest, but #1) Aren't these guys on the same team? #2)The Hunter swinging at the Chimera just knocks the figure over and #3) pushing the button really doesn't make the head "fly" off the body.  It pushes it up a bit and if you tap it kind of hard, the head might fall out of it's socket. Cool looking figure, lame action feature. 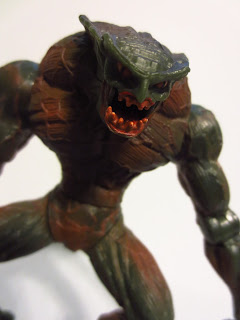 Toy Biz sure knew how to sculpt some fun monsters in this line, and this pack features two more that are quite hideous.  First is the Hunter.  While later games in the series made him look more reptilian, I remember one of the in-game journals from Resident Evil describing the creatures as looking like hairless gorillas.  While there are still reptilian features to this interpretation of the Hunter, he's not completely covered in scales.  His head is perhaps the most reptilian feature about him as it's covered with ridges and a scale-like armor.  The face isn't bad. It's creepy, but toy line creepy, meaning it hasn't held up as well as some of the other sculpts.  The body is loaded with details such as veins and small patches of scales.  The claws on the hands and feet aren't as sharp as I would like them to be, but I guess that's so no kiddies cut themselves open on the toy. The Hunter does have a really cool feature clinging to it's claw, however: the remnants of someone's face with an eyeball still attached. It's gruesome and a whole lot of fun! 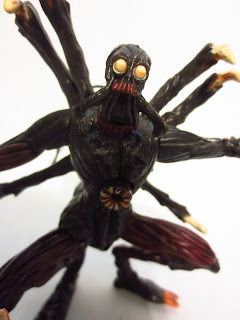 While I've already discussed that Chimera didn't have much going on in terms of articulation, his sculpt is pretty nice.  He's like a weird mix of a mammal and various insects. His legs and most of his arms look like they have mammalian muscle structure, but his back looks to have an insect like abdomen, wings, and legs.  He's not symmetrical, so while his left arm is more mammalian, his right is closer to an insect's segmented appendage. The face is oddly Cthulhu like, and the Chimera appears to have a mouth with lots of sharp teeth protruding from his chest. 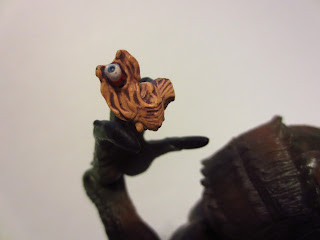 The paint's fairly good on both figures. The Hunter's paint isn't as detailed as some figures, but it gets the job done--he's molded in a very dark green plastic and then covered with various spots of brownish red. Some of those paint apps are actually applied directly to the veins on the figure while others are splotched over larger areas of the figure's body, but it works.  The chunk of flesh on the Hunter's claws is very impressively painted and features a great dark wash to help it stand out. 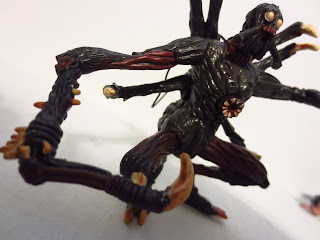 Chimera's molded in a dark brown plastic with some red body details, and the various teeth and claws done with a mixture of white and red to give them a great bloody, organic look.  Unless you consider the Chimera as the accessory for the Hunter, there aren't any accessories with this set.  Considering that you get two monstrous creatures, it's really not that big of a deal. 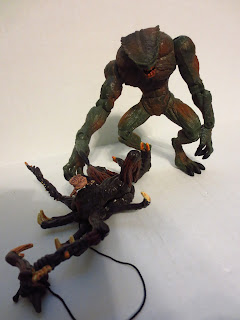 I think that this set, pairing two horrific creatures together, is really one of the top sets in the line. While Chimera's action feature is pretty nonfunctional, he's still a decent little figure that I believe would fit in OK with your Palisades or NECA Resident Evil figures if you're a little lenient on size. No one else has made a Chimera, so this is the only game in town.  The Hunter, while not able to fit in with those other lines, is still a really cool figure. While I only own one Chimera, I actually own three of the Hunters as whenever I found one loose at a Toy Show I would snag it.  I'd go with a good and a 1/2 on this set, probably with the 1/2 swing because of the cool chunk of flesh attached to the Hunter's claw. That's just gruesome!