Action Figure Review: Castaspella from Masters of the Universe Classics by Mattel (Confirmed: Great and a 1/2) 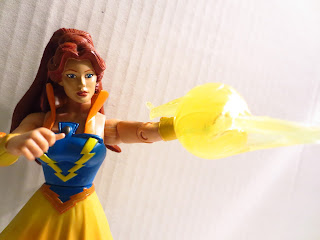 While Mattel has already released every figure from the first three years of the vintage Masters of the Universe line and has the last three figures from the fourth year planned (Mantenna, Two-Bad, and Modulok), they haven't even covered the first year of the Princess of Power toyline.  Fortunately, Castaspella gets us a little closer to completing the first series of figures, and gives us another key member of the Great Rebellion.  An alluring and enchanting redhead with magical powers, Castaspella might be one of the best female figures released in Masters of the Universe Classics to date.  Ready for a look at the magical queen of the Kingdom of Mystacor?  Then join me after the break..... 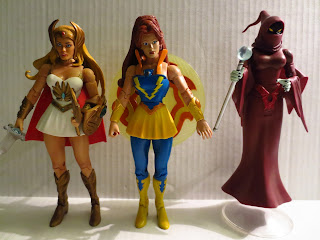 Castaspella's look is based on the Filmation cartoon and style guide artwork with just a little influence from the original toy.  Castaspella stands about 7 1/4 inches tall and, since she shares some base body parts with other female characters in the line, fits in perfectly with the rest of your MOTUC figures. While based on the Filmation design, she's certainly much more detailed and alive than some of the Filmation based figures like Eternos Palace Randor and Shokoti. 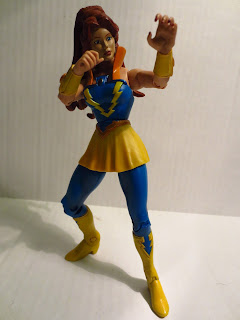 Castaspella features the following points of articulation: hinged ankles, hinged knees, swivel thighs, ball jointed hips, a swivel waist, ball jointed shoulders, swivel biceps, swivel wrists, and a ball jointed head.  While her long hair (which seems perfectly tailored for a 200x Teela custom) inhibits her head movement, all of her other joints seem to be in perfect working order with a great range of motion.  She doesn't seem to have any lateral rocking motion in her ankles, but the ankles on my figure do not appear to be loose, a problem some fans have complained about.  Once again, really good quality control, something I'm glad to see consistently this year. 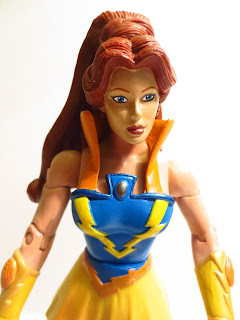 While Castaspella shares some basic body parts like her feet, thighs, and shoulders, most of the figure is actually comprised of newly sculpted parts that capture her unique look in the Filmation series.  Her's a cool reference pic I found on Deviant Art from artist David Gozu.  While the feet of her boots are the same as seen on Frosta and a few other females, the tops of her boots are a completely new sculpt that shows off the cool "double arrow" design.  The same is true of her bracers, which are a bit thicker than the standard bracers.  They feature a lighting bolt like design with a large gem in the center that seems to have a spider web inspired design on it.  It's probably not intended to be a spider web, however; it's probably intended to convey the various facets of a jewel.  Her skirt and torso pieces are also unique and covered with a plethora of design. I love the lightning-shaped belt, the lightning bolts on her chest, and the huge collar. It looks really good and not the least bit awkward. Lastly, but not leastly, (that's not really a word- *Editor*) let's cover the head sculpt. It's fantastic.  Castaspella is easily the most beautiful figure in the MOTUC line, hands down.  Her features are very soft and framed gorgeously by her unique and full hairdo.  She definitely "castaspella" on me. No doubt! 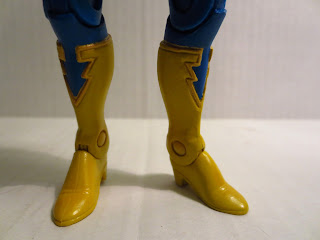 The paint work is bright and vibrant, really making Castaspella stand out.  I love blue and yellow together, as it just seems to work so well. It reminds me of Guardian and Dr. Fate, two of my favorite DC Universe Classics figures.  Considering there's some fine detail work on her, I think Castaspella's paint came out beautifully, even around the more difficult to paint areas like the boots and lighting bolts on her bodice.  What's nice is that there is a mixture of metallic and flat paints to help bring out details, such as on Castaspella's belt. The edges are a bright orange while the interior is a more metallic orange. It is little design decisions like this that help a figure to excel.  The eyes and lips on my figure are flawless, which is always a plus. 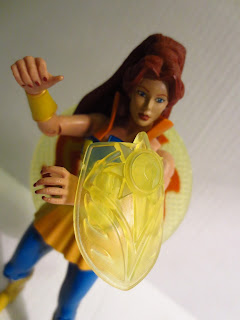 To further complete the package, Castaspella comes with some fantastic accessories.  First, she gets her own version of the shield that came with other Great Rebellion members like She-Ra, Netossa, and Frosta, but this time it's molded in a translucent yellow plastic.  I guess you could pretend the shield is made of a gem-like material, but I'm opting to assume that it's a mystical bound weapon that Castaspella can summon when needed (similar to the bound weapons in The Elder Scrolls video games).  It's designed to clip on to her left arm. 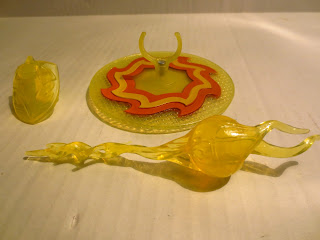 Another accessory for her left arm is her magic blast, a translucent yellow beam of energy that slips over Castaspella's left hand (she reuses Catra's claw hand) to represent her magic powers.  It's a very cool accessory that looks great with the character and seems to be quite fun for posing and displaying.  Lastly, Castaspella comes with her magic wheel, a homage to her vintage action figure.  The wheel snaps onto her waist (it stays on securely) and does spin, just like the vintage counterpart.  Since Princess of Power fans have not been getting many toy specific homages in MOTUC, this is a nice element to throw their way.  Actually, it makes a pretty impressive looking figure appear all the more dynamic and magical. Molded in a clear yellow plastic with a neat texture to it (mimicking the holographic sticker of the original), it's another great accessory that gives fans two ways to display the figure, which is always welcome. 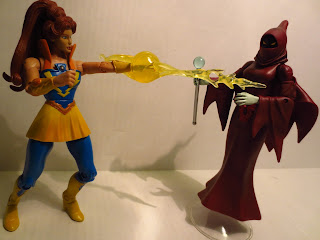 Castaspella turned out beautifully.  While she may not fit into the schemata of MOTU fans whose view of the world begins and ends with dudes in furry shorts, she really is a beautifully done figure and a great addition to the line.  Lots of new sculpting, a superb and vibrant paint scheme, and some fantastic, well thought out accessories certainly help.  Princess of Power fans have had a long road towards getting just the main cast, but since the 2014 Club Eternia subscription went through there should be some great progress made towards completing that roster.  We've got Glimmer on the way next year, Kowl's popping up in the newest weapons pack (in his original toy colors), and as soon as we hear about Queen Angella and Double Trouble we'll have the entire first series and most of the main POP crew.  In giving Castaspella a rating, I think I'm going with a Great and a 1/2.  She really is an exquisitely designed figure with no real weaknesses at all.  Maybe MOTUC just needs a little Etherian magic from time to time to keep the line fresh and new!