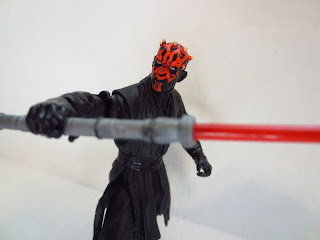 Last year after watching Star Wars Episode 1: The Phantom Menace in 3D, I created a list of 100 things that I like about the movie.  I'm not going to argue that the film is a great movie or that it stands on par with the original trilogy, but I still managed to find 100 things I liked about the movie. At the top of that list, however, is Darth Maul.  He's definitely has one of the most interesting appearances of any character in the Star Wars universe (which is saying quite a bit) and just emits a very real evil and menace.  While Darth Vader is a tragically conflicted character and Emperor Palpatine craves power, Maul seems to be a character who truly relishes evil and the Dark Side of the force just because.  All that is to say that I'm really excited that Hasbro chose to include Darth Maul as part of the first series of Star Wars black, the new 6 inch Star Wars collectors line.  I love the character and if you're going to pick a prequel character that pretty much everyone loves, I'd say Maul's the top choice.  Maul's the only figure from the first series of Star Wars Black that I wanted, so I'm glad that I finally got him. Is the Star Wars' franchise's first steps into the 6 inch scale a success? Read on and find out...

*First, let me say that there was a huge, and I mean a HUGE "wow" factor when I first saw this figure.  Not only is the packaging impressive (and collector friendly) but to actually see a Star Wars figure in this scale is indescribable.  I've read plenty of reviews and seen plenty of pictures of these guys, but to actually see one of these guys in person is amazing.  The presentation and figure is just incredible impressive. 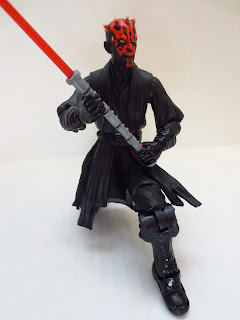 *Maul has really great articulation.  The variety and quality of the joints will allow for nearly any pose you want which is quite important for an agile character like Darth Maul.  The wrists, ankles, and mid torso joints are particularly impressive and allow for some very expressive and nuanced posing.  What's really cool is that Darth Maul can actually hold a good crouching pose, something very view action figures can do. 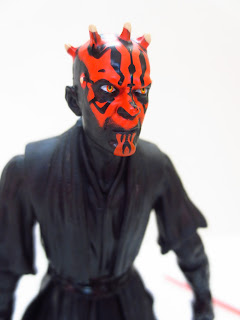 *I love the sculpt; it's really strong, especially the head sculpt.  Both of the head sculpts are quite good and offer a different look for Maul.  The robed head sculpt is more passive and stoic, being very reminiscent of scenes such as when he converses with Darth Sidious on Corsucant or first appears as a hologram to the Neimoidians.  The unrobed headsculpt is even better, though, and looks much angrier like when he duels Obi-Wan Kenobi and Qui-Gon Jin in the Theed Palace hangar. Some teeth showing would have been a nice touch, though.  The spikes on his head are really well done, as is the paint. It's much nicer than on any of the 3 3/4 scale figures.  The majority of figures in the 6 inch scale by companies like Mattel and Hasbro tend to be superheroes and characters who can easily share bodies.  That's most likely not going to be too prevalent with Star Wars which means that everything feels unique and distinctive to Maul. 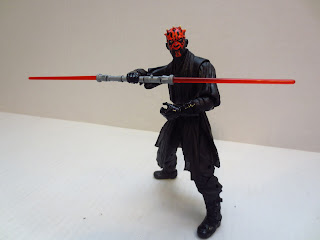 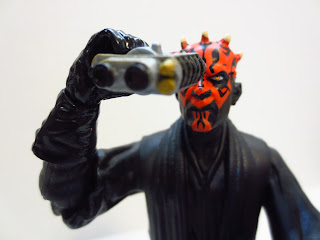 * The accessories are well done.  I love that Maul comes with the binoculars (even though it's hard to get him in a good pose to use them) and the lightsaber is fantastic.  It's a very detailed sculpt and features lots of little paint apps and a way to hang it from his belt.  Plus, it splits in to two pieces and the blades are removable. It feels quite a bit more durable than the sabers with removable blades in the smaller line.

*First, while I gushed about the articulation earlier, let me disclose that my figure did have an articulation problem: the hinged neck is completely immobile. I tried hot water, boiling water, the freezer, and even an exacto knife and I can say that my Darth Maul's neck joint isn't just stuck, it's completely fused together.  It sucks as the figure would be nearly perfect except for this one flaw.


*I wish Hasbro had opted to use cloth for the cloak.  Maul's pretty limited in his movement when wearing his robed head, which is a bit of a bummer.  Hasbro did a nice job of using a combination of molded plastic and fabric to create his robes and it would have been nice to see them attempt something like that on the cloak. 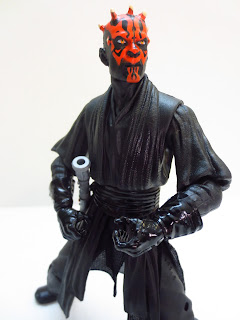 Overall:
I'm not sure I plan on jumping on to Star Wars Black as a completist, simply because I have so many 1/18th scale Star Wars figures. I do plan on cherry picking the line, though, and I imagine that if I saw these guys in stores I'd be much more tempted to buy figures I hadn't planned on buying previously just because they're so cool.  Darth Maul is a great 6 inch figure- he's both fun to play with and displays exceptionally well.  I hope Hasbro has great success with Star Wars Black as I really want to get to characters like IG-88, Bossk, Darth Tyranus/ Count Dooku, and of course, Admiral Ackbar.  I'm giving Darth Maul a Great due to the excellent sculpting, mostly fantastic articulation, exceptional accessories, and really eye-catching packaging that's reusable and collector friendly.  I deducted a bit because of the fused neck joint and the fact that I wish there was a little bit more paint work on the figure's body. 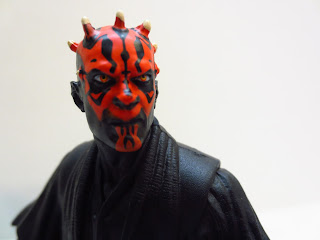 We actually haven't reviewed any Star Wars figures yet on ThEpic Review, mostly because Hasbro hasn't put anything new out since early 2012.  I did write this cool little feature on my first Star Wars figures, though. Hopefully we'll have more reviews to write as more cool Star Wars Black figures get released. 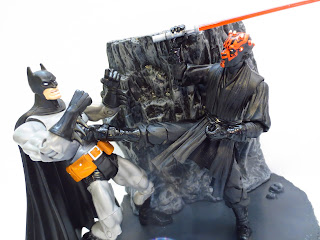 Big Bad Toy Store doesn't have Darth Maul available individually anymore, but you can order the whole first series of Star Wars Black figures (Luke Skywalker in his X-wing Gear, R2-D2, a Sandtrooper, and Darth Maul) for 79.99, exactly what you'd pay at retail (plus you won't have to drive around and waste gas!).

Barbecue17 once dressed up like Darth Maul. Except he only had white face paint, not red. And he wore a Halloween robe, not a Sith cloak. And he was on his bicycle, not a Sith Speeder. It was actually really lame.