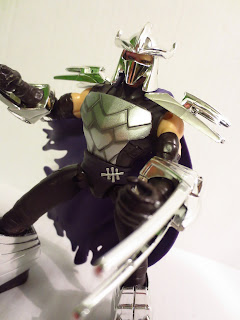 There's no doubt that the Shredder is one of the most iconic villains around, but has he ever truly had a perfect action figure made in his likeness?  He's had plenty, and I've owned most of them, but I've never felt that there was one that stood head and shoulders above the rest.  Last year when I bought the entire first wave of Nickelodeon's TMNT figures, I was really disappointed by the Shredder.  On my Amazon review of him, I wrote:

"I'm really disappointed with this figure. The Shredder usually makes an awesome toy, but I'm not exactly sure what happened here. He looks ok as part of a display, but if you put him by himself or try to play around with him, I think you're going to be disappointed. Hopefully, Playmates revisits this character down the line (although there is a talking version with a cape available currently) because this guy just doesn't cut it for me."

Well, now Playmates has released a new version of Oroku Saki that was a SDCC 2013 exclusive. He's taller, articulated a bit differently, and features vac metallized blades and armor. He's also $35, about 4 times the price of your standard TMNT figure.  Is he worth it?  Read on and face the Shredder to find out... 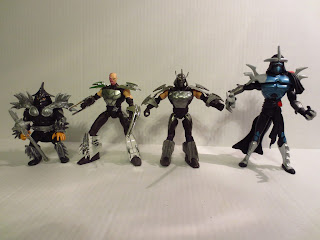 Shredder is about 5 3/4 inches tall from his boots to the top of his head.  He's sculpted with his legs stretched out a bit, so he'd probably be around 6 inches if he were standing straight.  This makes him a good bit taller than the turtles, which isn't out of line with how they're portrayed.  Stylistically, he'll fit in well with the rest of your Nickelodeon TMNT figures--he's not any more or less detailed than they are, and the vac metal doesn't look out of place here. 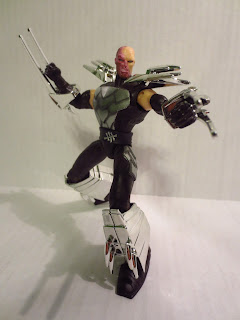 Shredder features the following points of articulation: hinged knees, ball jointed hips, a swivel waist, ball jointed shoulders, swivel wrists, swivel neck, and hinged shoulder pads.  The articulation isn't terrible, but it's not much better than the first Shredder figure released last fall.  While this Shredder features hinged knees, he's missing the hinged elbows from the first release.  Why not both? Honestly, those two combined would have really helped this figure to excel, but as it stands he's pretty much equal to the first release in regards to the articulation.  The hinged knees definitely give Shredder some better standing poses, but the arms are largely preposed.


The sculpt isn't bad compared to the other figures in the line; there's no reuse from the first version of Shredder, and the figure is appropriately menacing. I like the newer chest and thigh armor, but the shape and bulkiness of the claws still hasn't grown on me since the first release of Shredder last year.  Maybe it's just me, but I really prefer a sleeker look for Shredder rather than the bulky housing that surrounds his wrists and ankles.  I do like some of the smaller details, such as the spikes on his knuckles, but I think a large part of this look is lost on me.  The face sculpt is cool, although he does kind of look like Voldemort, perhaps due to the bald head and the sneer on his face. 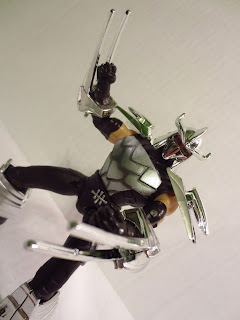 The paint is OK--it's not too different from the first release, except for some minor shading on the chest and thigh armor and the shiny blades.  The vac metalized blades are quite nice. I'm not always a vac metal fan, as I think it makes some figures look really cheap, but on Shredder it looks great and doesn't seem like it's going to flake off under normal wear and tear.  Most of the damaged side of Shredder's face is depicted with paint, and it makes him look like a "Saturday morning cartoon friendly" burn victim. 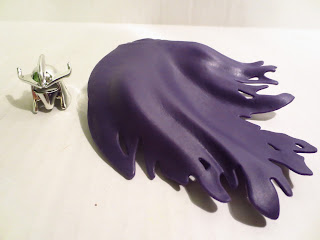 Shredder only comes with two accessories- his cape and his helmet.  The cape is molded in purple plastic, features a black wash, and easily fits on Shredder's back.  It attaches via a peg on the back.  The Shredder's helmet is also vac metalized and fits easily on his head. I like both of these, but at the crazy price that Playmates was asking for this guy, you'd think they could have added in a sword or an ooze container.  I rarely ever talk about packaging, but I will say the small box Shredder comes in is nice and is collector friendly, so he can be easily removed and put back in with no problems. 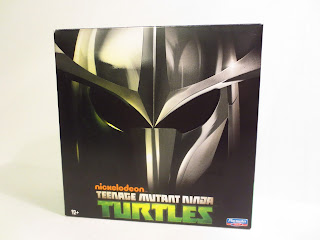 This is not a $35 dollar figure.  This is not really even a $20 figure. There's no reason why this figure shouldn't have been a regular release.  I think that's my biggest problem with the figure.  The new TMNT figures are fun, silly, and fairly low priced.  They're not really geared towards collectors, and I'm OK with that, but they really dropped the ball on this release. Rarely do I ever bring price into my reviews, but with an SDCC exclusive available just through the manufacturer and not through retailers, I think it's a legitimate issue to raise. I know that SDCC exclusives usually go for a few dollars more, but typically they at least feel like a better version of what we see on retail store shelves. I think Playmates is trying to get into the collector's game, but Shredder here shows that they have a lot to learn. Seriously, if you love Shredder or are a TMNT completest, buy it. But if you're content with your Shredder from last year, just keep him and save yourself some money.  Overall, I'm giving this guy an Eh and a 1/2. I really expected more from him, especially for the price. 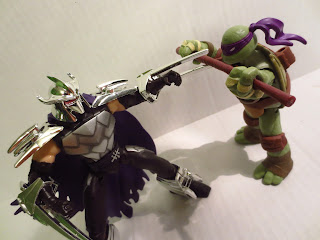 I really like the new TMNT line overall, however, and have reviewed quite a few of the figures released recently. I've done reviews on: Leatherhead, Ooze Tossin' Raph, Snakeweed, Stealth Tech Donatello, and Stealth Tech Raphael.  Big Bad Toy Store doesn't have this Shredder for sale (yet), but they do have some other cool Shredder merchandise on sale or available for preorder right now.