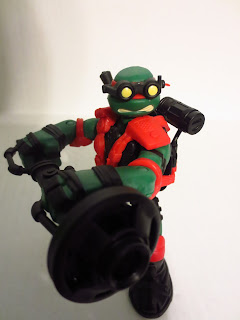 On a recent trip to Toys R Us (initiated not by me, but by my wife surprisingly), I happened to stumble across the majority of the newest wave of Teenage Mutant Ninja Turtles figures. All of the Stealth Tech Turtles were present, as well as Rat King.  The only thing I couldn't find was the Cockroach Terminator, so I'll just have to be patient on that one.  Anyways, when I first started collecting this line I hadn't planned to buy all the Turtle variants.  When the Ooze-Tossin Turtles came out, I wasn't overly impressed. Eventually due to a sale at K-Mart I bought Raphael since he was my favorite turtle, but I wasn't overly impressed with him.  The Stealth Tech Turtles, however, captivated me. Any figure dressed in tactical styled spy gear automatically registers on my action figure radar, so these guys ended up in the armful of TMNT figures I purchased last week.  Ready for a look at Stealth Tech Raphael?


Raph stands 4 5/8 inches tall and should fit in perfectly with the rest of your Nickelodeon based TMNT figures. I was curious if these guys would have the same size differences that the turtles from the first series had, and I was pleased to say that they do. I don't think it's as noticeable as in the first series figures, but Raphael is a bit larger of a turtle than his brothers and seems to be pretty similar in size to the first series figure. 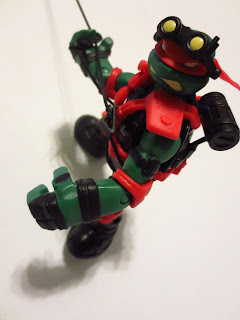 These guys aren't as articulated as the first series turtles, as they're missing wrist swivels, but they're much better than the Ooze Tossin' fellows. Raphael features: ball jointed knees, ball jointed hips, ball jointed shoulders, ball jointed elbows, and a ball jointed head. While you can't do as many far out poses as the series 1 figures, there is still enough education to make these guys fun.  I can get Raph into plenty of fun fighting poses and let him nicely wield his battering ram.  No quality control issues--this guy is solid. 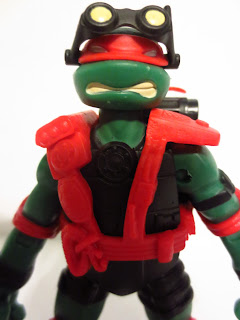 I really, really like the sculpt on this figure. It's not as detailed as the series 1 Raph, but the presence of the tactical gear really makes him stand out. My favorite costumed Raphael figure, up until this point, was probably the cool Space Cadet Raph from 1990, but I'm really, really liking this figure. Raphael (or any of the turtles) has the cool skin texture that the first wave turtles have, but he also has lots of cool details on his stealth uniform.  Raph's wearing a black sleeveless body suit and some heavy duty boots, along with his typical ninja gear, all of which feature cool little details that make this outfit feel rather hi-tech.  There's even something on his chest that looks like Tony Stark's arc reactor. What is it? Shell if I know!  There is a really cool generator-like piece attached to his shell, which I assume powers some of the devices on his utility harness, a red plastic (and non-removable) harness that goes across his torso.  Sculpted details include a coil of rope, a shell communicator, something that looks like a rack of LED lights, extra pouches, and two sheathes for his sai.  The head sculpt is good, as it is a rather pissed Raph face featuring bared teeth--it looks a lot like the vintage head's expression. 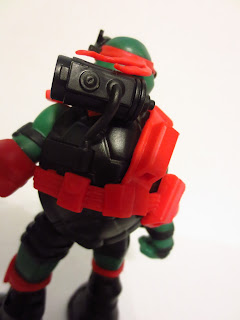 The paint work is simple on Raph, but that's not to say that it isn't neat and clean.  What little paint work is present looks great. Actually, though, most of the figure is molded in the necessary colors.  Pieces like Raph's knee and elbow pads, and even his bandanna, are separate pieces molded in a bright red plastic and placed over the figure. This makes the colors quite vibrant and gives the figure a more detailed appearance.  I wish some of the cool little details on his Stealth Suit and harness were painted, but they're not.  The goggles do have cool yellow lenses, though. Overall, I like the look of the turtles in the all black stealth suits. They look wicked. 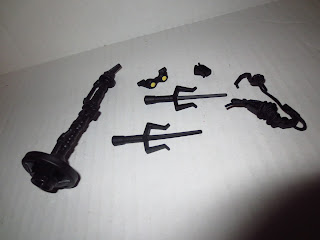 While some of the TMNT figures in this line have been barren of accessories (Splinter, Leatherhead, Dogpound), others have offered a wealth of goodies (April, most of the turtles). Fortunately, the Stealth Tech Turtles feature quite a few nice accessories.  For his primary weapons, Raph comes with two "stealth tech sais"; they look like Raph's standard sai but have flares on the end of the yoku (the little side prongs). They fit well in Raph's hands or in the sheathes on the back of his webgear. Next, he comes with a handheld battering ram that looks like a more advanced model of a modern piston-firing battering ram. Raph can hold it with both hands, and the cap of the battering ram is removable.  All of the Stealth Tech Turtles come with an 18 inch rappelling line with two clip hooks (a smaller and a larger hook) and a small clip that can attach to various points on Raph's harness. It's a fun accessory, much more so than a grappling hook launcher, and looks pretty cool. Lastly, Raph features his goggles which can flip up and down. They do plug into his head but can be easily removed (although that will leave two holes in the side of his head). Since Raph seems to be focused on getting in to buildings and fighting CQB, his goggles seem to be more like standard ballistic goggles rather than night vision or something. 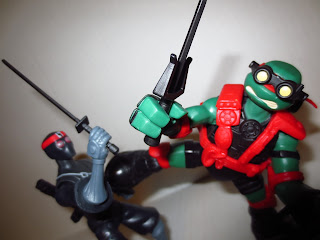 I really like this figure, probably more than I'm supposed to. The combination of fun accessories, tactical gear, and my favorite turtle really make this into a fun action figure that's also a really good toy.  You could fiddle around with this guy all day while waiting for the pizza guy to show up and have no worries whatsoever.  As a mass market toy targeted towards kids that I picked up at retail, I feel justified in easily giving Raph a Great and a 1/2.  Besides, giving him any less would just piss him off!  I hope Playmates and Nickelodeon are really committed to the show and the toy line because after having just watched the first few episodes this week, I'm hooked.
I've reviewed all of the first series and second series figures on my Amazon account, and here at ThEpic Review I've reviewed: Leatherhead, Ooze Tossin' Raph, and Snakeweed.  While they don't have any listings for the Stealth Tech Turtles in yet, Big Bad Toy Store does have a ton of Teenage Mutant Ninja Turtles product available, as well as preorders available for some of the newer stuff coming out from the Classics line.