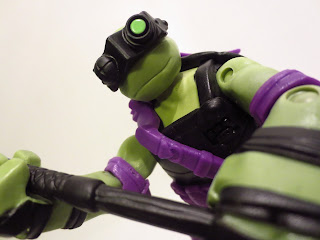 Well, since I last reviewed a Teenage Mutant Ninja Turtles figure I've actually began watching the new cartoon series and am loving it!  It's really good--it manages to be quite funny and silly while still having some engaging storylines and very impressive action scenes. It seems like it's doing a great job of appealing to the kids while still having enough throwbacks to keep old school TMNT fans happy. It's not as amazing as IDW's Teenage Mutant Ninja Turtles comic, but it's still pretty bodacious.  From the newest series (I believe TMNT series 5) of figures based off of the cartoon, we have Stealth Tech Donatello, who I'm looking at today. I skipped all of the Ooze Tossin' Turtles except for Raph (cause he's my favorite) but the Stealth Tech guys just looked too cool. They're really nicely designed with a cool stealth vibe. If you want to reenact Mission: Impossible, Splinter Cell, or Metal Gear Solid with your TMNT figures, these guys will let you do that! And who wouldn't want to?  Here's a brief look at Stealth Tech Donatello. 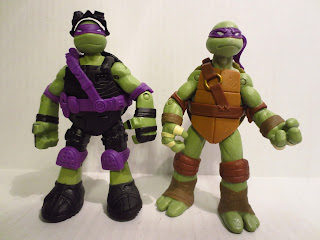 The Stealth Tech Turtles aren't as articulated as the first series figures, as they're missing wrist swivels, but they're much better than the Ooze Tossin' Turtles. Donatello features: ball jointed knees, ball jointed hips, ball jointed shoulders, ball jointed elbows, and a ball jointed head. While the wrists do limit the amount of fighting poses the series 1 figures, there is still enough articulation to make these guys fun.  Donatello can hold his accessories and rappell with his cord, and feels like a solid, well built figure. No quality control issues at all! 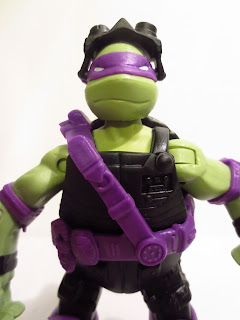 I really like the abundance of little details that Playmates gave the Stealth Tech Turtles; while their skin doesn't have the amount of detail which the first series figures had, the cool uniforms and webgear keep them interesting.  Donatello looks to be clad in a tactical body suit with shorts, boots, and armored knee and elbow pads. His shoes look to have treads on the bottom for a better grip.  The suit is covered with a variety of pouches where Donatello can keep all of the bits and bobs he needs for any technological endeavor while out in the field and even looks to have a control unit on the chest. Perhaps this helps control the robot?  His kneepads and elbow pads look armored in case he has to spend lots of time crawling through small spaces (gotta protect your joints!); along with the headband and webgear, they're all seperately molded pieces that help to give the figure's details a more three dimensional feel. I particularly love his webgear--it's got a small length of cord, a few pouches, and the T-phone attached, as well as a sheathe for his bo. The head sculpt is good--it's different from the series one figure and looks a bit smug. Maybe Donatello just solved a problem that was perplexing everyone else and he's showing off a bit? 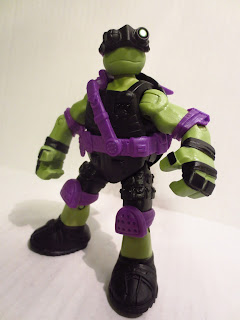 Donatello doesn't feature a lot of paint work, as most of the figure is molded in the colors represented. Something I failed to point out in my review of Stealth Tech Raphael is that the Stealth Tech Turtles actually have colored knee and elbow pads that match their headbands, not all brown pads like the series 1 figures. Anyways, while there are details I wish had a coat of paint (the T-phone, his pouches, etc), the figure nicely mixes the green of Donatello's skin with the black stealth elements and his traditional purple. It's fun and vibrant without being garish. 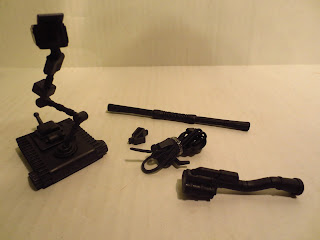 The accessories on this guy definitely remind me more of the large accessory complements that Playmates gave most of the first series figures rather than most other figures in the line (such as the disappointing arsenals for Splinter, Metalhead, Leatherhead, and Baxter Stockman). The Stealth Tech and spy theme has really been carried over into Donatello's equipment, although there is one accessory that no one seems to be able to identify.  First, Donatello comes with an 18 inch rappelling line with two clip hooks (a smaller and a larger hook) and a small clip that can attach to various points on his harness. All of the turtles come with the accessory, and it actually is really fun. I was able to actually use it to have the turtles posed as if they were scaling a wall.  Secondly, Donatello comes with his traditional wooden stick, except this time it's molded in black plastic and looks to have a different grip. It's a little on the short side, but fits nicely in his hands or in the sheathe on his webgear. 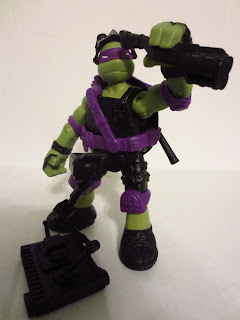 Thirdly is his robot companion.  It's a little surveillance robot built by Donatello that features treads on the base and a segmented neck with a swivel joint at the base and a ball jointed head.  It's a really cool accessory.  Lastly is the mystery accessory, which appears to be a telescope or periscope of some type. While it isn't shaped like a traditional periscope, I want it to be one so badly, as the turtles have a long history of periscope usage. Remember Raphael's Sewer Spy Goggles? They had a periscope attachment. How about the Headdroppin' Turtles? Everyone had a periscope! Heck, as a kid I had this super cool green periscope that had the TMNT logo on it. The handles folded out and everything. I can't find one on-line for the life of me, but I'd buy it in a heartbeat! Anyways, long story short, I'm pretending this is some kind of periscope device for Donatello. 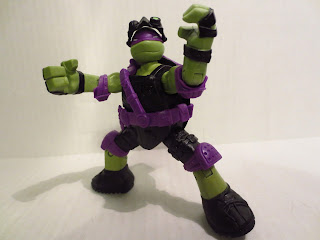 Donatello also has the goggles which can be removed. These are really cool and look like perhaps a mixture of nightvision goggles and perhaps a viewing device so that he can see whatever his drone robot is seeing. Goggles and nightvision are always awesome, so Donatello gets major points here. 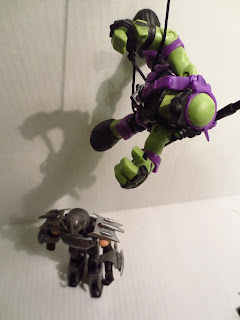 I'm really a fan of Playmate's TMNT line.  I can actually find them and buy them at retail--unlike most other action figures these days--they're sturdy, cool, and just plain fun. Great toys that really remind this "adult" collector why I loved toys in the first place. Sure, some people will dismiss these guys as simple wacky variants, but there is so much cool detail and design here that I can't help but love them.  Easily a Great TMNT figure, although my favorite Donatello figure ever is still probably Donatello the Undercover Turtle from the vintage line. I hope to see that version get some kind of update in the Nickelodeon based line sometime soon.

I've reviewed a few figures from the new TMNT line by Playmates Toys, including Leatherhead, Ooze Tossin' Raph, Snakeweed, and Stealth Tech Raphael. I've got many more TMNT reviews coming, so stay tuned and stay tubular!  By the way, I don't see individuals of this exact figure on BBTS, but they do have a preorder for basically every figure released so far in this line for $219.99.  It's 24 figures total with duplicates of only Raph, Michelangelo, Shreddar, and Leonardo. Ends up being about $9.16 per figure, not bad considering these guys sell for 8.99-9.99 on average. Save money and save gas if you haven't dived into this line yet.