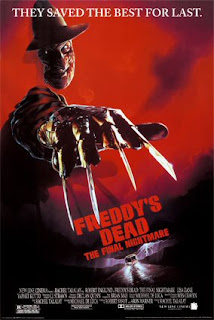 Last year during my annual Halloween horror movie marathon (which typically starts in mid-August) I set out to watch all of the A Nightmare on Elm Street movies. I had seen the original and the remake with Jackie Earl Haley (which I liked- sue me) but had never seen any of the sequels.  I only made it through the first five last year so I just recently decided to start checking out the others. Last night I watched Freddy's Dead: The Final Nightmare (A.K.A. A Nightmare on Elm Street 6), both because I wanted to see how the main series ended and because I wanted to see the context of this crazy NECA version of Freddy Krueger with the Powerglove.  So, I know you're just dying to know my opinions on this 22 year old film, right?  Let me just start by saying that this was enjoyable film, but just not a very good one.  There's always a macabre fun when Freddy Krueger's involved (much like the Cryptkeeper) and I love the special effects of the period, but the story is kind of crazy and doesn't seem to make too much sense.  Anyways, here's a review of Freddy's Dead: The Final Nightmare.


One of the most used tropes of the earliest 90's was kids hanging out in youth centers, which is where this movie begins.  It's 1999 and when a teenage amnesiac John Doe (Shonn Greenblatt) gets brought in by police to a youth center, social worker Maggie Burroughs (Lisa Zane) decides to get involved with this crazy kid who thinks he's Freddy Krueger's son and help him discover who he is by taking him back to Springwood, the town where Freddy's from. Now completely barren of children and teenagers, Maggie, John, and three runaway youth end up really sticking out in town. The runaway stowaways are Tracy (Lezlie Deane), a tough girl who's into kickboxing, Carlos (Ricky Dean Logan), a deaf boy who seems to be a pretty decent guy, and Spencer (Breckin Meyer) who's a rich kid that likes to smoke weed.  The motley crew end up spending the night in Freddy Krueger's house, start getting picked off one by one, and then devise a plan to kill Freddy by going into his memories with the help of Doc (Yaphet Kotto), a youth worker who's seriously into dream theory.  He was also Mr. Big in Live and Let Die and Parker in Alien, if you're wondering.  And Brecken Meyer?  He was in Garfield, $%^#@$ $%*!@$!
Alright, so I'm not really sure if the plot sounds crazy because it's intimately intertwined with the first five movies in the series and I'm missing details or if it's just so insanely crazy.  I mean, traveling into Freddy's memories?  Sleeping in his old house?  Planning to grab him and bring him out of the dream world? Isn't that almost exactly what Heather Langencamp did in the original film?  Anyways, if you don't think much about it the movie is fun in a crazy way and I'm now leaning more towards the movie just being insane rather than having a complex plot.  C'mon, it features a stoner gets sucked into a twisted video game, Johnny Depp shows up in a "this is your brain on drugs commercial and gets hit with a frying pan, and some kid almost gets smothered to death by a road map. Seriously, it's as crazy as it sounds.  I think that's actually one of the endearing parts about the movie.   While the plot just keeps adding more details, including a very detailed background and explanation for why Freddy does what he does, it still feels like retconning rather than uncovering new plot elements.  I can't say I was disinterested in the plot, but I do think it actually could have been pulled off better.  There's also a whole plot device of these dream demons that get brought in at the last minute but never get fully explained.
Probably one of the best parts of the movie are the bizarrely original special effects.  We have stop motion dream snakes, Freddy cutting off his fingers one by one, a guy getting his face comically rearranged, and an expanding chalkboard Freddy uses to torment the deaf kid after turning up his hearing aide.   I love special effects from the 80s and early 90s. While there's a little bit of CG here (it was released in 1991) there are plenty of cool traditional effects. It doesn't matter how great modern CG is, there's just something really fun about traditional special effects that resonates with me (it's one of my favorite aspects about the 2013 Evil Dead film).  Freddy's comical personality and the dreamlike elements of the film definitely allow for an environment where crazy special effects fit in like a burned hand into a bladed leather glove.
This isn't a movie to watch if you want a great plot or to truly be scared. Simply watch this to just laugh at how silly it can be and how it revels in it's lunacy.  I'm giving it an Eh and a 1/2.  The only movie weaker than it in the original six films is A Nightmare on Elm Street 2: Freddy's Revenge which breaks too many of the series' established rules with no rhyme or reason.  If you want the best film in the series, it's easily A Nightmare on Elm Street 3: The Dream Warriors.  Still, this movie is weirdly fun, just not very good.  It also has Freddy Kruger saying "Now I'm playing with power."  Yup, it was the 90's indeed.