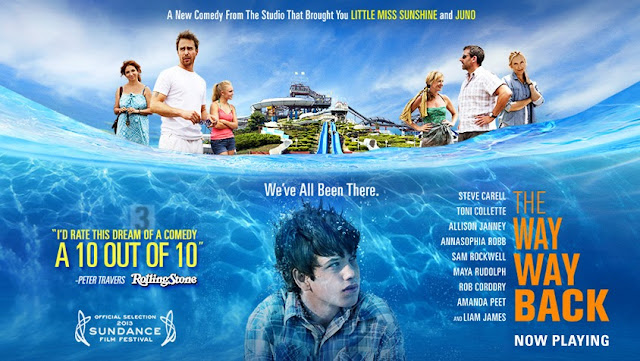 The Way Way Back, isn't your typical summer movie!

What exactly is a summer movie? Has it simply become giant robots punching each other or superheroes racing to stop a doomsday device, or can a summer movie still be something more?  A couple of weeks ago the answer to what summer movies have become would probably have been a relatively simple one, answered by post credits stingers and marketing stretched to cover the globe.  That was until the theatrical release of one of the favorite films of Sundance 2013: The Way Way Back.  Could this film really restore the promise of a summer movies? Find out after the break……

The Way Way Back is a classic coming of age story (I say classic because sadly, many film makers have forgotten about this treasured sub genre) revolving around 14 year old Duncan (Liam James) as he tries to cope with his mother Pam’s (Toni Collette) choice of what looks to be his soon to be jerk of a stepfather, Trent (Steve Carell), and his overly hormonal potential step sister, Steph (Zoe Levin), on a trip to Carrell’s summer beach: the Riptide.  After being berated countless times by his mother's boyfriend, Duncan decides to explore the rest of the beach where he runs into Owen (Sam Rockwell), the manager of the local water park Water Wizz, at a pizza parlor. Little does Duncan know he has a met a friend who will shape his life.

The Way Way Back does an incredible job of providing a truly authentic look at what it's like to grow up and discover who you are.  The film doesn't just do lip service to growing up; it covers almost all the questions you had as kid in a very realistic but comically entertaining way, such as: your first job, learning how to dance, and of course, checking out the opposite sex. The film then bravely chooses to break the shackles and tropes of old school coming of age stories, giving the film its own place among the likes of films such as The Sandlot and Stand by Me.  For example, what happens when you don’t get the girl the way you thought you should? Or when your parent's love for you is truly brought into question? These are the type of serious but relatable questions The Way Way Back deals with.