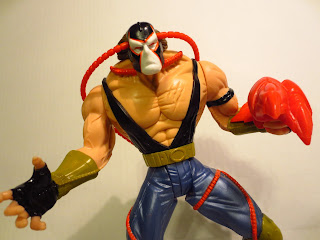 In 1996 Bane appeared in two Batman toy lines: once in Kenner's The Adventures of Batman and Robin and once in Kenner's Legends of the Dark Knight line. The latter is the figure we're looking at today and he's as monstrous as he ever was.  Labeling this line as a "Premium Collector Series" makes it seem that Kenner was trying to get in on some more of the burgeoning superhero action figure market.  While Toy Biz offered dozens of different characters in their various Marvel lines (X-Men, X-Force, Iron Man, Spider-Man: The Animated Series), Kenner still adhered to the their policy of "the more Batmans the better" that they utilized to great success with 1990's The Dark Knight Collection.  They also typically used much plainer sculpts and smaller figures than newcomer McFarlane Toys, so it seems with this line that Kenner (at this point owned by Hasbro) was really hoping to produce another hot collector's line to complement the sheer action figure insanity that was The Power of the Force, their 1995 revival of the Star Wars line.  Bane stands alongside Harley Quinn as one of the two Batman villains to come out of the 1990s that have really cemented their role in the pantheon of Batman's rogues gallery.  Ready to learn why Lethal Impact Bane is still so lethal? Once you have read my review, you have my permission to buy.  After the break, of course.... 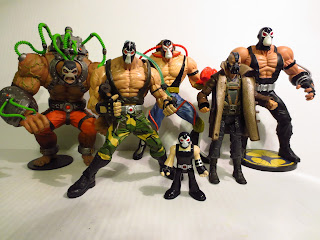 Bane's a big guy.  The figure stands about 7 1/4 inches tall from the soles of his boots to the top of his hair, but he'd be even taller if the figure weren't posed in a hunched and lunging position.  With Legends of the Dark Knight, Kenner attempted to create figures in a more dynamic, comic book inspired style.  While this figure doesn't really look like Bane from any specific appearance, he's easily recognizable as a comic Bane and not Bane from Batman: The Animated Series.  While he's larger than any other Batman lines that Kenner released before or after Legends of the Dark Knight, he does look OK alongside more modern figures, such as Mattel's 6 inch Batman lines like DC Superheroes and DC Universe Classics, or most DC Direct figures.  The style is a little different, but I think it works OK. 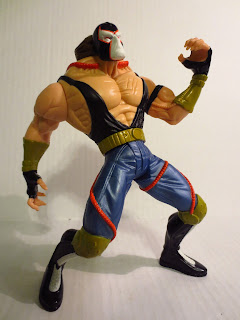 While these figures are larger and more detailed than your standard 90's Batman figure, they're not any more articulated.  Bane features: swivel hips, a swivel waist, and swivel shoulders.  The left shoulder features the most common of action features: the spring loaded power punch.  Here it's billed as a "Venom Powered Punch" and it's activated by pushing a large square button on Bane's left shoulder.  Bane does punch, so it's a pretty decent action feature.  If there's any figure you want to be able to throw punches other than He-Man or Rocky, it's Bane. 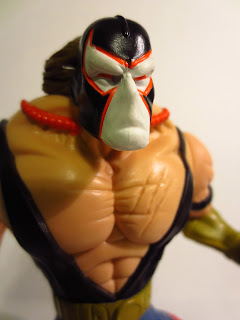 Considering this guy was released in 1996, the sculpt remains fairly impressive.  Check out how massive and 'roided out Bane is.  He really does look like he jumped off of the page of an early-mid 90's comic book.  While Legends of the Dark Knight gave us some very different versions of some Batman villains, Bane here looks pretty traditional when compared to his early comic appearances.  The only thing that sticks out as being unusual is the long hair flowing out from the back of Bane's hood.  If I had to pick a weakness for the figure, that would be it.  I love the pose, as it manages to be dynamic without going overboard and being useless for kids who bought this toy to play with.  Little details like the slashes on Bane's chest, the tubes all over his body, and the hint of a face underneath the hood bring the sculpt to life.  Kenner also did some excellent work on his outfit, as details like the laces on his boots and the details on his knee pads just pop. 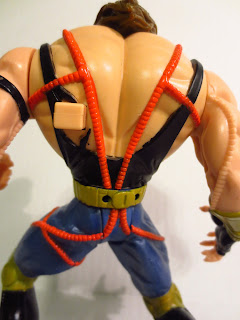 The paint is well done and pretty clean overall, although some smaller details have a bit of slop to them.  The black on Bane's mask, boots, and gloves is glossy to replicate leather while his tank top is a flat black.  I love that the majority of his tubes are painted, but was disappointed to notice two unpainted tubes on his arms.  I think I'd have preferred green tubes, but the red isn't bad and matches his outfit nicely. 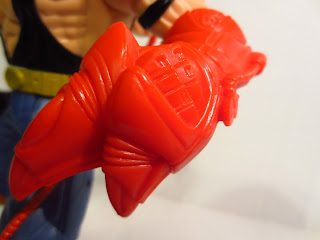 Bane comes with three accessories: two removable tubes that plug into his head and belt and his gauntlet.  The gauntlet is a little more aggressive looking than the standard gauntlet that Bane wears, but it does have giant claws on it and seems like it can function pretty nicely as a weapon. It fits into and over his left hand.  The tubes are made from a flexible plastic, and they easily plug in to Bane's body. They're also removable in case you want to have Batman do so in order to defeat Bane.  They're all molded in red plastic with no paint apps, but they do match the tubes on his body. 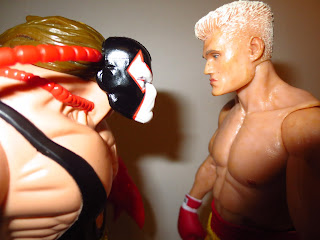 While it was out of scale with pretty much every other Batman thing Kenner produced, Legends of the Dark Knight did give us some great interpretations of some of Batman's fiercest villains.  Bane's another solid figure in a line that I really wish I had collected when I was younger.  Still, most of these figures can be gotten for pretty reasonable prices, and I'd recommend interested Batman collectors and Bane fans to give this guy a chance.  He's really quite nice. Honestly, if he were released today in a line like Mattel's new Batman line geared towards kids, I think he'd still be quite popular among fans.  I do wish he had green tubes rather than red, and the long hair just seems to be a leftover from 1990's extremeness, but overall he's Great.

I've reviewed a couple of other toys from Kenner's Legends of the Dark Knight line: Laughing Gas Joker
and Twister Strike Scarecrow. You also might want to check out Brad's review of the Hot Toys The Dark Knight Rises Bane. Big Bad Toy Store may not have this figure in stock (he's well over 15 years old) but they do have plenty of other cool Bane collectibles in stock and available for pre-order.