Today I'm reviewing what might be one of the coolest Batman figures ever made: Dark Rider Batman. Yes, it is Batman on a horse. A horse as black as midnight with glowing red eyes. And Batman? He's ready to ride into action wearing a cavalry type outfit while armed with a bronze sword and a whip.  While you may have seen Batman riding a horse in a variety of places, the image that typically comes to mind is this excellent scene from Frank Miller's The Dark Knight Returns.  Someone needs to release that as an action figure as soon as humanly possible! Anyways, thanks to Kenner and their Legends of Batman toyline, we at least have this super cool version of horse-riding Batman. Dark Rider Batman was released as a deluxe boxed item in 1994 as part of the first series of figures and always intrigued me. Finally I managed to track one down, and let me say, I'm not disappointed in the least.  If I could go back in time and change one thing from my past, it would be going back to my wedding day and making sure that this figure of Batman riding on a horse was triumphantly standing atop my wedding cake. (*Editor's note:  Um, no.*)  Yup. So anyways, let's get right into this, after the break of course....
(Note that Batman should have a cape in all of these pictures--I left the cape somewhere and didn't get a chance to pick it up before the pictures were completed.) 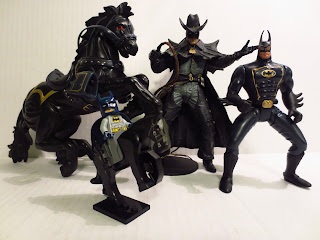 Like the rest of the figures from Kenner's Legends of Batman line, Dark Rider Batman is a little larger than the standard Batman from The Dark Knight Collection, Batman Returns, or Batman: The Animated Series.  While he only stands about 5 1/4 inches tall, keep in mind that he's also in a wide-legged stance so he can ride his majestic steed, Bat-Horse (that's not his real name, but I wanted to call him something). Bat-Horse is only about 5 1/4 inches tall (sculpted in a gallop), but his is about 8 1/2 inches long from his head to his tail. Both figures come packaged together in a box with a nice illustration of the duo on the front. 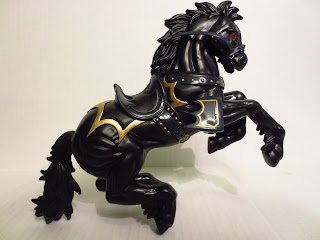 Batman is articulated at the Kenner five: swivel hips, swivel shoulders, and a swivel neck.  While he's in a wide-legged horse riding pose, he still stands just fine. Batman has a very cool action feature--pushing a small lever on his back causes his right arm to rotate back, and releasing the lever causes the arm to swing down, so if he's holding either the whip or the sword you've got some combat action going on.  It's probably the most basic of action features, but it works well and the lever is pretty solid with some nice grooves in it to give your thumb a better grip.  Bat-Horse is only articulated at the tail, which can swivel.  Otherwise, he's a solid plastic figure. The saddle is sculpted onto the figure and the stirrups can swivel to accommodate Batman's riding poses.  Batman fits great on his steed and Bat-Horse can either stand on all fours as if galloping, or can be stood as if rearing back by resting on his tail. There's nothing more fearsome to a criminal than coming face to face with Batman wielding a whip and a sword while riding a reared up horse with red eyes.  While criminals are a cowardly lot, I imagine that sight would scare almost anyone. 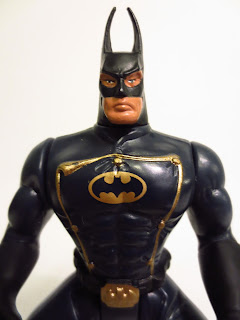 As with most of the Legends of Batman figures, the sculpting is sufficient but not anything radically unique.  Batman's wearing an outfit that kind of reminds me of a cavalry officer since it has that weird buttoned panel on the front.  Besides just sporting a bat-logo belt buckle and bat emblazoned boots, he's also rocking some chaps.  He's got the really high, pointy ears and a stern look that says, "I'll break every bone in your body and enjoy doing it." He's got some cool gold paint apps that mix up the black and blue color scheme. The gold has a tendency to rub off, though, so be careful. 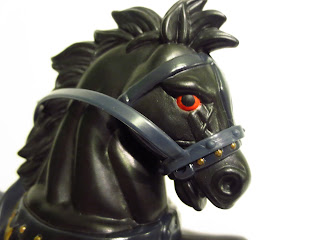 Bat-Horse is pretty unique, as I can't think of another superhero toyline with a horse.  He's muscular, and sculpted in a gallop with a wild mane and fur flying above his hooves.  The saddle is exceptionally cool, with a bat shaped saddle and some good details.  The only complaint I have is that I think the pupil is a little too large, making Bat-Horse look a bit like the darker, more vengeful cousin of Derpy Hooves. All red would have been better.  Bat-Horse has some actual reins that Batman can grip in either of his hands to help steer, although I imagine they're really just for show; Batman and Bat-Horse probably have a telepathic link between them. 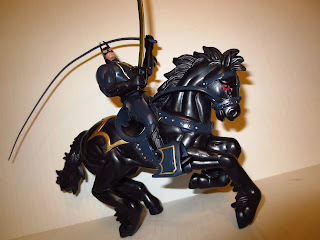 While Bat-Horse may technically be an accessory for Batman, I'm not going to say that to his face and risk getting trampled.  Instead, let me just say that  Batman comes with a flexible plastic whip, a saber with a bronze painted blade, and a removable cape. The cape is really cool, as it hangs off to the side and looks as if it's dynamically flowing. It's a nice kit. 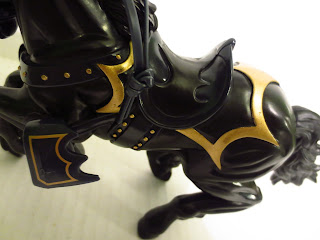 My love for this figure doesn't have any rhyme or reason to it, but I don't feel it needs to; this is simply a mighty cool toy that is indicative of the weird, wild, wacky things Kenner was willing to do with the Batman license.  While it's great that we have awesome Batman toys coming from a variety of companies like DC Collectibles, Mattel, NECA, and Hot Toys, and while it's amazing that you can currently shop for figures based off of Adam West's Batman from the 1966 series, Frank Miller's Batman from The Dark Knight Returns, Christian Bale's Batman from The Dark Knight Trilogy, and Batman from the Arkham Asylum and Arkham Asylum video games, there's still something special about knowing that in 1994 you could walk into a toy store and purchase an action figure of Batman riding a horse with red eyes and a whip-swinging action feature. Confirmed Epic. Because I can and because this toy is fun.