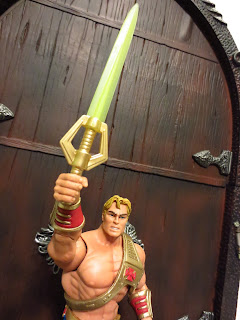 While Mattel has constantly trumpeted Masters of the Universe Classics as an all inclusive line including characters from every area of the Masters of the Universe universe, that doesn't mean that they've released said characters equally.  While we have tons of figures from the vintage MOTU line and various concept characters, Princess of Power and The New Adventures of He-Man haven't seen as many releases.  Finally this July Mattel released He-Man in his New Adventures look, and I have to say that, while New Adventures is not my favorite MOTU incarnation, Galactic Protector He-Man might be my favorite MOTU figure yet released this year.  He really captures the aesthetics of classic sci-fi pulp heroes like Flash Gordon, John Carter of Mars, and Buck Rogers, as well as Luke Skywalker, all while still keeping distinctively He-Man-ish traits.  He's also an incredibly versatile figure with two alternate armors and two interchangeable portraits.  Whether or not you dig the concept of He-Man in space (I do, and I really want to see Mattel release a Galactic Protector She-Ra at some point), hopefully you can appreciate this version of the most powerful man in the universe as a fantastically designed and well articulated action figure.  More after the break... 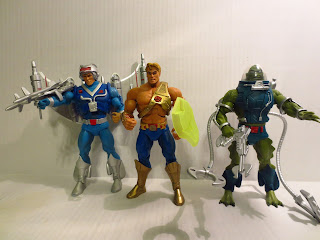 He-Man comes in right at 7 inches, which means that he's perfectly in line with every other figure in MOTUC.  I feel like I always say this, but it really is due to the fact that these figures use so many reused parts that they're kept in a scale where every figure is right around the same size.  While the usage of the same body isn't a physical buck, the controlled size on the figures serves the same purpose of keeping these guys and girls congruent with one another.  While he reuses the standard male thighs, torso, and shoulders, He-Man also reuses some parts from 2010's Bow: his forearms, hands, and boots.  While some of the figures from the Filmation series have seemed to adopt some of the elements of the more simple cartoon designs, He-Man here doesn't look much like the Jetlag Productions art seen in The New Adventures of He-Man, but much more like a mixture of the vintage toy and the MOTUC style. 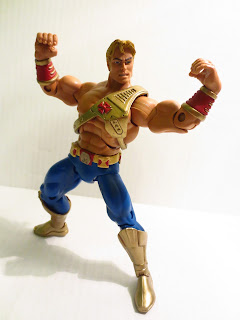 He-Man features the standard great MOTUC articulation and then some!  Yes, he has the same hinged hands that Bow had, allowing him the optimal range of motion for his sword wielding poses.  He-Man features: hinged ankles, boot swivels, knee hinges, thigh swivels, ball jointed hips, a waist swivel, a hinged abdomen, ball jointed shoulders, bicep swivels, hinged elbows, swivel wrists, a vertically hinged right wrist, a laterally hinged left wrist, and a ball jointed head.  All of the articulation on He-Man is tight and flawless. He's easily one of the best articulated figures in the line.  It really can't be understated how much being able to move his wrists more adds to posing. I honestly wish that since Mattel had these hands made, they would have implemented this into all of the figures that used standard male human hands.  He's a super fun figure to pose and play with, as he can raise his sword aloft and point it towards his enemies. 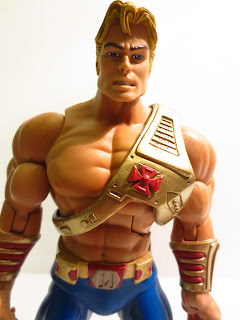 While Galactic Protector He-Man uses quite a few pieces from Bow, it seems that these pieces were truly created with He-Man in mind, as many fans always speculated.  The more techy boots and gauntlets really mimic the appearance of the vintage New Adventures He-Man figure (although he only had a gauntlet on his right arm).  The crotch piece is all new and features the stylized H/M belt buckle logo as well as some newly added pouches on the belt. These are really sleek and fit the retro space fantasy aesthetic of the figure.  He-Man has two sets of armor, which gives you three display options (shirtless, with his power harness, or his space armor.  Usually I'd cover these with the accessories below but they're so vital to his look that I'm covering them here. 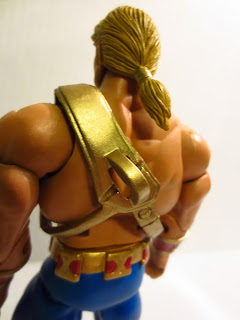 First, I'll touch on the power harness.  While it looks like the vintage toy's power harness, the Horsemen have really doctored it up, particularly by adding the familiar red cross from the original He-Man's armor. This really is a great visual element that connects the New Adventures incarnation of the character to his MOTU roots.  There are lots of details on the harness, as well as a slot on the back to stow the power sword.  The space armor, however, might be one of the most beautiful pieces of armor to have ever been released in MOTUC.  It takes all of the details from the vintage figure's armor and amps them up while adding some new elements.  I love how the armor looks to have a softer material component underneath the chest plate that is visible around the abdomen and the arms.  Where the Eternian figures often have fur lining their armor, NA He-Man has a space-age fabric of some kind. Ingenious!  Little details like the dial, the tubes on the chest, the sword sheathe, and the various bits and bobs of circuitry really help to cause this figure to reach new and uncharted places for the MOTUC line. 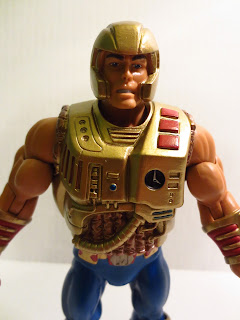 So the body sculpt and design is fantastic, but how about the heads?  First, let's look at the standard helmet-less head, which features He-Man sporting long hair tied back in a ponytail.  It's a different look for He-Man but it works.  The long hair is tied back in a ponytail with a small gold clasp and flows down to the middle of his shoulder blades.  Some fans have really complained that this head sculpt really doesn't look like the MOTUC He-Man, but I disagree. I think it looks a lot like him, just a bit thinner and world weary.  In the MOTUC canon, by the time He-Man heads into outer space, tons of terrible stuff has happened on Eternia.  He-Man has lost friends and family, and has been engaged in a campaign against Skeletor's armies.  A gaunt and more severe visage seems appropriate for him to show the toll that his previous adventures has taken.  The second portrait is the helmeted head.  While the face looks identical, nearly every other feature is hidden underneath a rounded helmet. It's a very retro classic looking space helmet with lots of curves and smooth surfaces.  There's a very cool detail on the back, though: a port of some kind. What's it for? Who knows, but it looks cool. 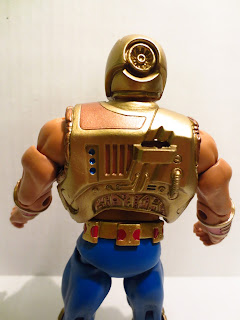 The paint work on this guy is by and large very neat and clean.  I love the color scheme of blue and gold with red highlights, as it really stands out on the shelf and just looks so good together.  Little details on the various pieces of armor and the belt stand out and stand up to some of the best action figure paint out there. He-Man's space armor really is an amazing piece of work. 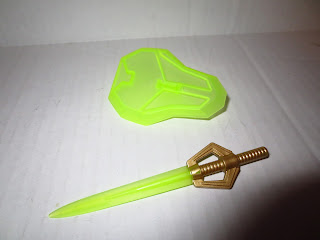 I've already covered the additional helmeted portrait, the power harness, and the space armor. They're all easily removable, and the armor and harness attach easily and stay on securely.  He-Man also comes with his New Adventures power sword and shield.  Both pieces are molded in a very cool translucent green plastic that just looks amazing.  I loved my New Adventures He-Man as a kid (even after his sword broke), and I'm really glad to have this new version, since I sold mine at a yard sale at some point in the past.  The shield is a simple piece with a few detail lines. It clips easily on He-Man's wrist. The sword features a gold hilt and looks like a cross between the traditional power sword and a lightsaber.  It's a really neat piece. I love all of the accessories that come with this set, and have actually contemplated getting a second figure simply to display one with the helmet-less head and harness and one with the armor and helmet. The only other figures I've done that with have been Vykron (I bought three to display him in all three outfits) and Marlena (since her in her space outfit is one of my favorite MOTUC figures). 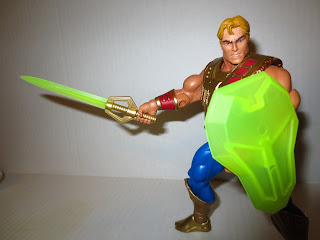 I'm going to say that so far this year, Galactic Protector is going toe to toe with Ram-Man and Fangman for the title of my favorite figure. He's just an exceptional action figure. It's a shame that so many people are going to hate on him just because he's from New Adventures.  Multiple distinctive looks, great accessories, excellent quality control, an out of this world color scheme, and enhanced articulation make this guy a winner and another confirmed Epic MOTUC figure.  Now bring on New Adventures Skeletor, darn it! 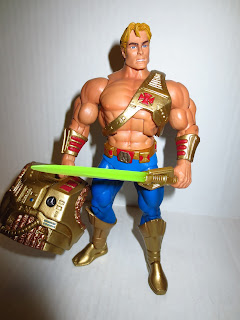 I've reviewed most MOTUC figures from this year, including: Castaspella, Clamp Champ , Fang Man, Icer, Karatti, King He-Man, Octavia, Procrustus, Ram-Man,  Snake Face , Spirit of Hordak, The Fighting Foe Men, Rokkon and Stonedar, and Shokoti.  Galactic Protector He-Man has long since been sold out on Mattycollector.com, but you can still order him from Big Bad Toy Store by clicking here.