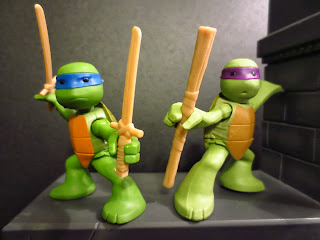 One of my favorite things to do in the world when I get excited is to jump up and down and shout "Radical, radical, radical" just like the baby turtles in the original Teenage Mutant Ninja Turtles film. Now, thanks to Playmates Toys, I can reenact that classic scene whenever I want with the "Turtles in Training" figures from the newest line of toys based off of the new Nickelodeon cartoon series. These come in sets of two and today I'm looking at the two pack featuring Leonardo and Donatello. They're cute, armed, and have a never ending hunger for pizza. Ready to look at half of the tiny turtle teens? Then join me after the break... 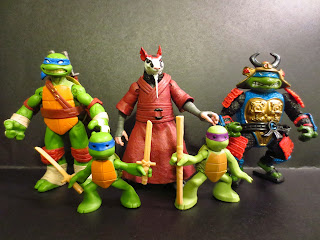 Leonardo stands about 2 1/4 inches tall while Donatello is around 2 1/2 inches. They're both extremely cute and while they're designed to fit in with the basic TMNT action figures from Playmates, the style of the figures reminds me of Popco figures. I think they'd also fit in well with children's lines like the Star Wars Galactic Heroes or Imaginext figures. Remember these come two to a pack and there is another set available (Raphael and Michelangelo) which I haven't tracked down yet. 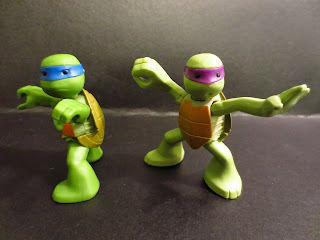 They're not very well articulated when compared to a larger action figure, but they're probably as articulated (or even more so) than your standard miniature sized figure. Each turtle features a swivel waist, ball jointed shoulders, and a swivel neck. The swivel/ hinge ball joints at the shoulders give some decent poseability although some poses you'll want to do cannot be achieved since there's no wrist or bicep swivel. These guys can look good when you find the right pose, however, and they stand fine on their own. 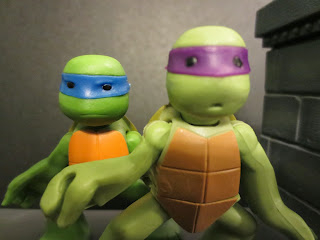 The first thing you'll notice is that they're super cute. These guys definitely look like young turtles and not just smaller versions of the standard guys. They have dark little eyes (which, once again, put me in the mind of Popco stuff) and some really funny facial expressions. Leo has a stern look on his face while Donnie's gaping with an open mouth. They're both unique sculpts and feature the turtle basics like their shells and toes. The sculpts are pretty basic, but they accomplish what they need to. 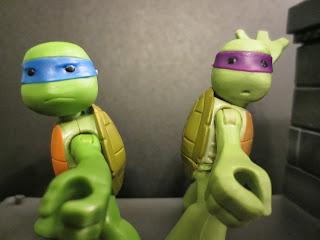 The paint is also quite simple. These guys are molded in their respective shades of green with just a little bit of color on their shells and chests. The bandannas are separate pieces and are molded in the appropriate colors. Not much to say here except simple paint jobs are par for the course with this line, but it doesn't hurt the figures here. They look just fine. 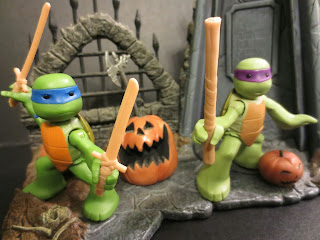 Each turtle comes with their signature weapons simply molded in a very light tan plastic. Donatello has his bo staff; it's as tall as he is and fits tightly in his right hand. It has a little bit of sculpted detail including the wood grain of the staff and the wraps in the middle. Leo comes with two training katanas. They look hand made and fit into his left and right hands. 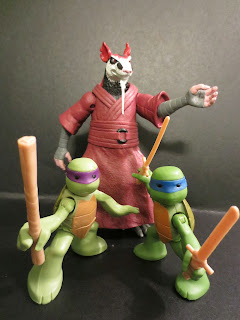 These aren't the most impressive action figures available. They're not actually even the most impressive TMNT figures available. Still, there is something undeniably fun about these. I have a feeling that kids and collectors of stylized figure lines like the various Hasbro 'Heroes' sets (Combat Heroes, Adventure Heroes, Galactic Heroes, Robot Heroes) and Mattel's Imaginext will love these guys. They're quite unusual and do turn out to be pretty fun toys. They're very simple, but I'm not sure what more Playmates could have done with these guys. I'm giving them a Good. No one's going to be floored by them, but TMNT fans should enjoy adding these to their shelves.