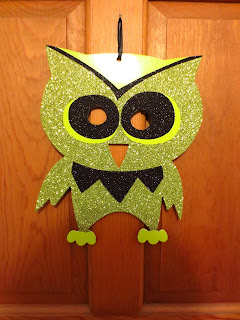 Looking to improve your home on a budget? For $1.97 you can begin to spookify your home, turning it from a mundane residence into a domestic domicile of doom!  What do you need to complete your look?  How about a freaking glittery owl.  Those guys creep people, constantly steal Tootsie Pops from kids, and are never what they seem.  Owls are also a great Halloween decorative item because while they're spooky, they're a bit more tasteful than fake tombstones or a bloody scarecrow in your yard, which means you can begin using them to decorate as early as August (or late July if you're really in the Halloween spirit) without the neighbors complaining.


During a quick grocery trip to Wal-Mart on Saturday, I had to stop and peruse the aisle of Halloween decorations.  My Wal-Mart didn't have everything up yet (no costume pieces--I looked), but the few trinkets they did have caught my eye, particularly this bright green owl.  It's glittery and a great shade of bright green, which I love.  That particular shade of Halloween green reminds me of ooze, Slimer, and the Creature from the Black Lagoon; all things that I like.  While Black and Orange are the mainstream Halloween colors (they're the John and Paul of the Halloween palette), I really like Purple and Green (even though they're the George and Ringo).  They also had purple and orange, but I didn't see black.


My daughter was born two weeks ago today, and so I've been hit with this overwhelming "dad instinct" to bring her back something cool from the store every time I'm there (even though she doesn't seem to care about much else right now besides eating and sleeping).  Last time she got a 5 Minute Marvel Stories storybook and a Berenstain Bears treasury; this time she got a glittery green owl.  I'm going to call it her first Halloween decoration and treasure it until she's old enough for something cooler like a fake rubber hand or fake blood.  Then all bets are off.


The owl's made of something thicker than cardboard. Since I'm not a carpenter, I'm going to call this chipboard. Be careful you don't bend it because it seems like it would potentially crack.  It's pretty light-weight and covered with sparkly glitter, so I don't think it'd make a good outdoor decoration unless you hang it on a door covered by a screen door or a storm door.  It also has eye holes which are fun too look through, but just be warned you're going to get glitter on your face doing so.  But who cares, right?  You're an owl now and can do whatever the heck you want.

I think I'm going to go back and buy the other colors now as soon as I check under the couch cushions for change.