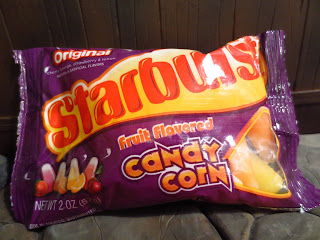 When I first heard about these, I was expecting that they would either be Starburst jellybeans in the shape of candy corn, or something more akin to Mike & Ike's.  Boy was I wrong!  These things are full-on fruit flavored candy corn.  I finally found a pack today (this is a 2oz pack that cost me $1.07 at a Walgreens after tax) and decided to both eat the candy and review it.  Because looking up reviews for candy corn is a pretty common thing people do, right?  Anyways, candy corn is a pretty polarizing issue.  People in camp A love the stuff and would eat it year round if they could.  I'm in camp A actively hunt down anything candy corn flavored. Remember that candy corn Jones soda?  I actually had an IV drip full of that stuff during the whole month of October 2004. Anyways, what happens when the outrageous lemon, strawberry, orange, and cherry flavor of Starburst possesses your average candy corn? Find out after the break... 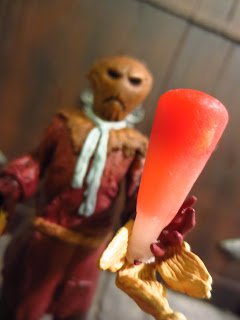 Let's take a look at the candy first, as the package isn't terribly exciting, although it is purple and green (which I love!) and has orange writing.  There's nothing particularly terrifying about the package, but I guess this means that more young children can buy this candy without experiencing nightmares.  The candy itself looks really cool. It's actually a bit larger than your average candy corn and does have three different colors due to the way the white and the fruit color in the middle blend together. 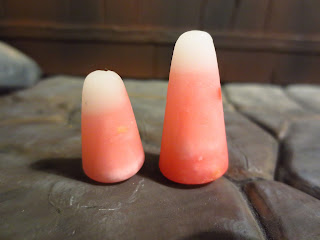 How's it taste? Well, remember that I was initially expecting something more fruity and tangy like a jelly bean, so I was caught off guard when I realized that these were actually waxy like actual candy corn.  Yes, Starburst Candy Corn does actually resemble candy corn in both appearance and composition.  It's tangy, but not as intensely fruity as jelly beans.  It's got that softer sweetness to it that candy corn has.  I offered some to my wife, who hates candy corn, and she actually kind of liked it.  She didn't ask for a second piece, but she said it wasn't bad. After eating a few pieces, I still wasn't sure if I liked it or not. 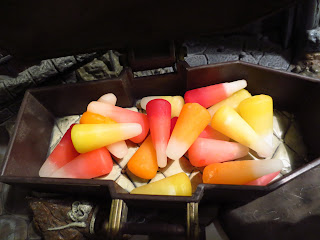 I did do what came naturally, however, and that was to take two pieces of the strawberry candy corn and put them on my teeth as fangs.  They stick pretty well, so that's a plus.  As I ate more of the candy corn, I began to think the candy reminded me of the taste of chewing on a Nik-L-Nip. You know, those little wax bottles filled with freeze pop juice.  Imagine chewing on the wax and drinking the juice at the same time.

After that image came into my mind, I began to like the Starburst Candy Corn a lot better.  It was like one of my favorite childhood candies, but I didn't have to worry about choking on the wax (I choked on that once as a kid, too--this seems to be a recurring theme of my candy reviews).  I just finished eating the bag of these while writing the review, and I kind of want a second pack, so I'd say these candies are a success.  They're colorful, fun, and taste like eating a combination of wax and dyed sugar water. I'm pleased!