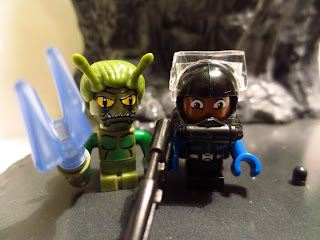 Last summer I jumped back hard into Lego due to their excellent Monster Fighters theme.  I loved those sets and reviewed everyone of them on my Amazon page.  Soon afterwards, I started collecting the giant modular town sets, the DC Superheroes sets, and basically any set I felt I could weave into my gigantic haunted town (I essentially combined the Vampyre Castle, the Mad Scientist's Lab, Helm's Deep, Hogwarts Castle, and some other random castle sets into one giant haunted castle).  I've slowed down my Lego collecting a bit earlier this year (although I really want the new Jabba the Hutt sail barge and the Rancor pit) but was interested to see that Hasbro's Kre-O has jumped into the building block and minifigure craze with their CityVille Invasion theme.  I know Hasbro's put out plenty of other sets based around Transformers, Battleship, and G.I. Joe, but it was these sets that appealed to me.  A set with zombies attacking a police station?  Another spooky castle? A fire department getting attacked by a dragon?  Hasbro's essentially releasing sets of what I've done to my normal Lego town!  Well, except for the fact that I'm not too keen on their building style. It just doesn't look anywhere near as impressive as the sets that Lego designs and produces.  They do have some cool looking minifigures, though, and you can get a pack of two of them for less than $3.  They're blind bagged and there seem to be eight unique sets.  I gambled on one (without feeling the bag) and ended up with Walter Wetsuit and the Wavecrawler, who seems to be the Creature from the Black Lagoon's nephew.  Let's jump in and take a look at these two, shall we? 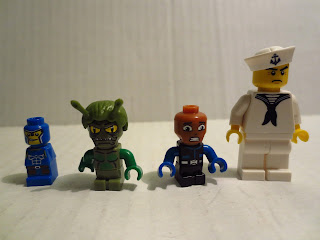 The first thing you'll notice about the CityVille Invasion Kreons is that they're really small.  Standing a little under 1 1/4 inches tall, these guys are closer to the Lego microfigures that came with the Heroica and Lego board game sets.  They're much smaller than your standard Kreons that appear in the G.I. Joe and Transformers sets, which are closer in size to the Lego minifigure.  These guys only take up one stud standing, while the average Kreon and Lego minifigures take up two studs.  The heads, helmets, hair pieces, and accessories will fit your average Kreons and your Lego minifigures, though, which is a huge part of the appeal of these sets, especially if you track down the zombie themed ones.  These guys are definitely very caricatured--almost done in a style not unlike Mighty Muggs or Mez-itz. 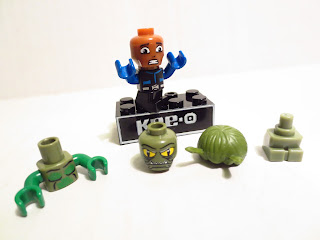 While the standard Kreon has more articulation than your average Lego minifigure, these guys actually have less.  Each figure features: a swivel waist, swivel shoulders, and a swivel head.  The lower body, torsos, and heads are easily interchangeable and with a little work, and the arms come off as well.  The heads are on the neck peg very tightly, so when you attempt to turn the head you'll inevitably end up turning the waist.  They seem nice and solid, though, with no quality control problems. 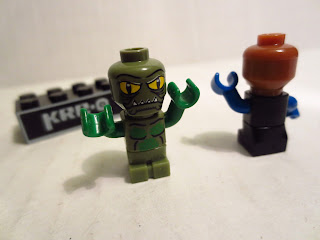 Like I mentioned above, these guys come blind bagged two to a pack, and I think the pairing of figures you get is fixed.  My bag is sea-themed and came with Walter Wetsuit and Wavecrawler, a Gillman look alike.  The base body for both figures is exactly the same: a stubby build with a notch on the front to suggest legs, a smooth torso, long, thin arms that reach far enough away from the body so the character can hold regular sized accessories.  The heads are cylinders with a peg on top, just like Lego minifigures, but feature a slightly more defined neck and chin. 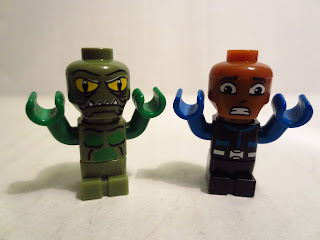 Like Lego minifigures and other lines like Minimates, the paint work is what separates the individual figures from each other.  Walter Wetsuit is a fairly standard diver.  He's molded in black plastic with blue arms and only has a little bit of detail on his tiny torso.  Other than some small lines giving the impressions of a zipper line and pockets, only his belt and buckle can be recognized.  The face is funny, though, as Walter has a very startled look on his face. The Wavecrawler is molded in an olive green with bright green arms, and has some little crosshatched scales on his chest. The eyes are large and yellow with some nice wrinkles painted underneath that gives them a sunken in look. He's also got some little pointy teeth poking out of his mouth in a grim under-bite. 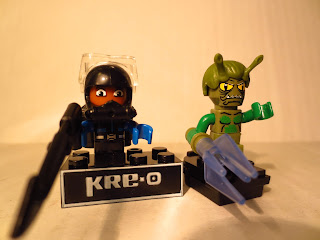 The accessories also help to differentiate the Kreons and give them some character. Also, all of these pieces are compatible with Lego minifigures.  Wavecrawler has a green "hairpiece" that fits over his head and looks to have some antennae popping out. It looks OK, but would probably be better suited for an alien of some kind.  He also has a two piece staff that features a pointy, translucent blue trident. Well, it has four points, so I guess it's a quadent. Is that a real thing?  Walter Wetsuit comes with a diving helmet with attached air tanks (the bottoms of the tanks have a hole that's compatible with any studs), a removable clear visor, and a spear gun which can be held by it's grip or by a handle on top.  It's got a wicked point on the end.

To round things out, the pack comes with a black 2/4 brick with the Kre-O logo engraved in it, and a special brick that is compatible with some sets to allow minifigures to move.  Both can serve as stands for the figures if you desire.


If these guys were the same size as your standard Lego minifigures or Kreons, I'd be ecstatic with them. As they are, they're a fun novelty when you want to buy something but don't want to spend a lot of money.  I'll probably combine the compatible pieces from these figures (the heads and accessories) to add more figures to my Monster Fighters themed haunted city, as I don't plan to collect the CityVille Invasion sets.  The price is definitely right on these, though, and I know I'll try to find a few more of the zombie sets to make more zombies for my Lego town. I imagine that's what most buyers of these figures will be doing, too.  Considering all things, I'm giving this set a good.  If you want some little guys to stand around or plan on adding to a larger display, this isn't a bad way to go. 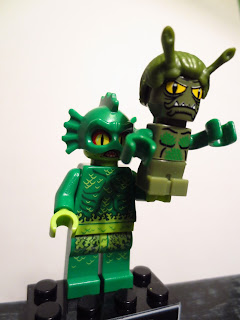 We haven't reviewed any other building sets like Kre-Os or Lego on ThEpic Review yet, but I have reviewed some other spooky minifigures. Check out reviews of the Minimates Chris Redfield from Marvel Vs. Capcom 3 by Diamond Select and the Baby Deadbeet from October Toys.  If you're looking for Kre-O sets delivered right to your door, make sure to check out Big Bad Toy Store: they've got plenty of sets from all the Kre-O themes right here.